Tesla’s heated seats offer additional comfort for drivers and passengers in cold climates. While each of Tesla’s currently available models provides heated seats, some subtle changes appear to have been made in the company’s vehicles as they evolved over the years. Some of these changes can be seen in the heated seats of the Model S and the Model Y.

Tesla owner-enthusiast DAErik shared the difference between the two vehicle’s heated seats. The owner of both a Model Y crossover and Model S sedan, DAErik utilized a FLIR thermal camera to identify the in-seat heater’s layout and how they worked. Following are their differences.

The positioning of the heating systems in the front seats of both vehicles is noticeably different. Based on images from the thermal camera, the Model Y’s heating coils are more compact and concentrated than the Model S’ system. The crossover’s front seat temperatures consistently reached 95 degrees Fahrenheit throughout the seat as well.

The Model S’ heating elements are broadly located. The heating systems are not concentrated in the middle of the seat. Instead, they are placed in manner that spans from edge to edge. Temperatures for the Model S seemed to vary significantly more than the Model Y. The warmest portions of the backrest reached 70 degrees Fahrenheit, while the “butt warmers” managed to reach up to 90 to 93 degrees. 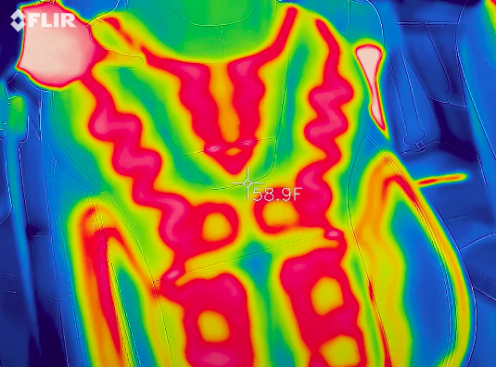 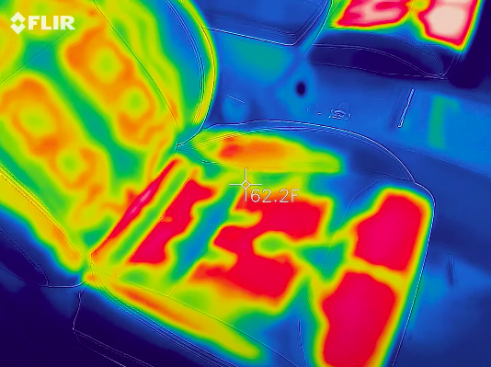 The Model Y’s rear seat heaters were also compact and concentrated like the vehicle’s front seats. The positioning of the heating elements give maximum coverage throughout the entirety of the chair. The middle rear passenger area, however, only contains a heating element in the seat portion and not the backrest. The absence of back heating could be due to the middle seat’s fold-down feature. Temperatures ran consistent with the Model Y’s front seats.

The Model S’ rear seat heating elements were similar to the front seats of the vehicle. While the design is different because the rear seats are a different shape, the layout is extremely organized and would provide sufficient heating to rear passengers. Additionally, the back middle seat in the Model S has full heating as well, unlike the Model Y. However, it does not contain a fold-down seat back or cupholders. Temperatures in the rear seats are relative to the front seats.

DAErik stated that the main noticeable difference between the two vehicles is the Model Y’s absence of a heated steering wheel. This feature is available in the Model S, as well as the Model X. However, Tesla decided to forego this option with both the Model 3 and Model Y, even though the two vehicles are offered with a premium interior. The Model S steering wheel, for its part, heats up to 105 degrees Fahrenheit, according to the FLIR camera.

While the seat heating systems of the two cars differ, both do an adequate job of regulating a passenger’s temperature in cold climates. Based on DAErik’s findings, both systems have their advantages, but it seems the Model Y’s new architecture offers slightly higher temperatures.