Tesla recently had a Model Y on display for employees to see outside of its seat factory at 901 Page Street in Fremont, California, roughly 3 miles from the company’s main factory. In photos posted by multiple Reddit users, it appears the same deep blue metallic Model Y driven on stage and used for test drives at the car’s unveiling event last month was available in the building’s parking lot for a closer look.

The vehicle on display is outfitted with chrome-delete trim, a look that’s popular with the Tesla aftermarket community yet a standard factory offering for the Model Y. Additionally, the all-electric crossover is seen with Tesla Sport Wheels in the color black. Tesla offers Sport Wheels in silver as a $1,500 option in the Model 3 and Model Y online configurator. 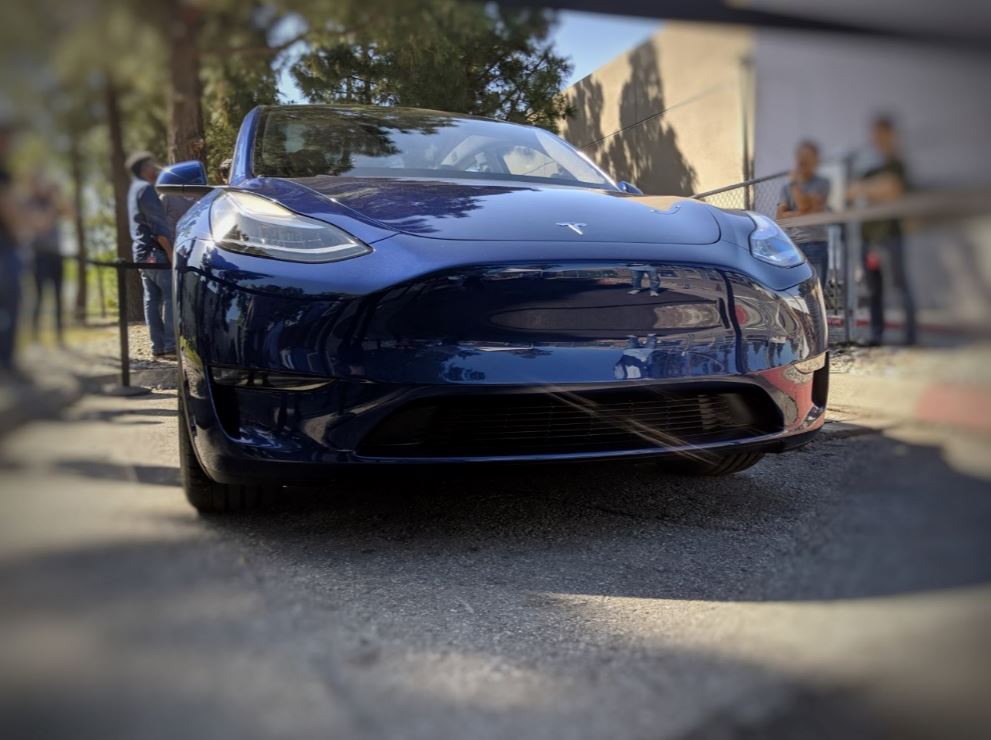 The final production location for the Model Y is yet to be decided, as noted by CEO Elon Musk during Tesla’s Q1 2019 earnings call. He subsequently estimated a decision on the matter would be made within the next few weeks, the current close call being between the Fremont factory and Gigafactory 1 in Sparks, Nevada.

Space is limited in Fremont with the Model S, Model 3, and Model X lines already being produced there, and in Tesla’s Q4 2018 full year update, Musk indicated that the company’s Nevada facility might be the best manufacturing location for Model Y. Musk jokingly hinted that sprung structures, i.e., heavy-duty “tents” similar to those used to help expand Model 3 production, could be an option if space was limited wherever Model Y was ultimately made. “I’m a fan of tents, like real, hardcore tents,” Musk mused.

Tesla’s Model Y is expected to be the highest-volume-production vehicle for the company when it goes on sale, even exceeding the mass market Model 3. In California, for example, Tesla was the highest sold alternative powertrain brand in 2018, and Model 3 represented 55% of all battery-electric vehicle sales. The popularity of the crossover SUV market is driving future Model Y sales predictions, and Elon Musk has anticipated a demand and delivery schedule that equates to 1 million units per year.

Production of the Model Y is expected to take place in late 2020 with the first deliveries beginning shortly thereafter.