A new Tesla Gigafactory 3 video footage shows that its parking lot is starting to fill up with Made-In-China (MIC) Model 3, a potential sign that the Silicon Valley-based carmaker is ready to deliver these units to consumers once given the go-signal to sell its locally-produced vehicles.

Tesla’s Gigafactory 3 in Shanghai aims to produce about 3,000 vehicles per week, according to initial estimates from Global VP Grace Tao. If estimates are correct, the first car plant in China wholly owned by a foreign brand should provide Tesla with a notable boost in its attempt to hit the lower end of its sales guidance of 360,00-400,000 vehicles in 2019.

The rollout of Tesla’s MIC Model 3 gives the brand a chance to gain a share of the market from other car manufacturers such as BMW, Daimler, and other local contenders and this will also be a feather in the cap for CEO Elon Musk to prove Tesla can rake in and sustain profits in global markets. Bloomberg has reported in November that Tesla plans to start delivery of the Model 3 in China before the Spring Festival, which starts on Jan. 25.

Tesla has also deployed Gigafactory 3-made Model 3 units to showrooms across the country last month as a way to boost its ongoing awareness campaign. The entry of the leading U.S. electric car manufacturer in the Chinese market is a welcome development for local manufacturers.

“I think Tesla coming to China will be a positive catalyst for the EV market. I always believe that having a good product that really gets the consumer interested and expands the overall market is good for the industry,” Xpeng Motors president Brian Gu said in an interview. 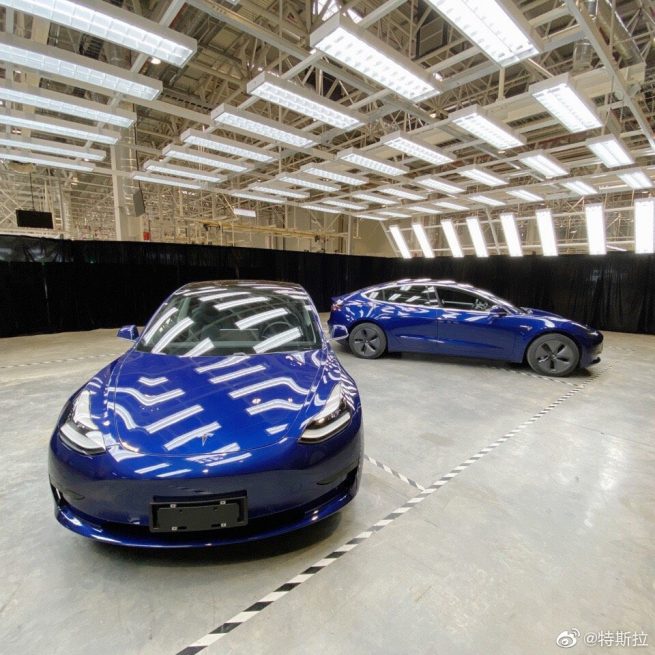 Tesla validated earlier reports during its Q3 earnings call and confirmed that the Shanghai Gigafactory is progressing ahead of schedule. To support this claim, the electric car maker released images showing that production in the new factory in China has started.

The construction of Gigafactory 3 in China begun in January this year and was ready for production in 10 months. According to Tesla, the factory in Shanghai is roughly 65% cheaper to build compared to its plant in the US.

The Model 3 will have a starting price of around $50,000 in China. The pricing, comparably higher than other electric vehicles in the local market, seemingly hints that Tesla may want to maintain its premium branding globally.

Check out the Gigafactory 3 China video footage below, courtesy of Tesla owner-enthusiast JayInShanghai:

Here’s another glimpse of the Gigafactory 3 in China from Jason Yang: