When it comes to all-electric performance, adults aren’t the only ones allowed to partake in the fun. Tesla’s kid-sized version of the Model S has been a hit with its fan community since it debuted 2016, but now McLaren is also looking to inspire a new generation of future fans of its brand with a pint-sized, ride-on 720S supercar with some big features.

The littlest member of the McLaren family resembles its older brethren in a few ways. It has two functioning dihedral doors with exposed carbon-style elements, and the entire design of the toy is styled to be immediately identifiable with the 720S it’s modeled after to include the brake lights, pedals, and working air vents. Official McLaren retailers will have the brand’s classic Papaya Spark color available exclusively, but seven other paint choices will be offered at contracted retailers including Azores Orange, Belize Blue, Lantana Purple, Onyx Black, Mauvine Blue, Silica White, and Saros Grey. Altogether, McLaren clearly had authenticity in mind for its youngest drivers, specifically those 3-6 years in age.

Since speed is limited by the nature of the ride-on 720S, which likely maxes out around 3 mph, it makes sense that McLaren added a few bonus items; they just so happen to resemble features similar to Tesla’s full-size vehicles. The dashboard has an infotainment screen that can play a preloaded selection of children’s music or show a movie by plugging in a USB or SD card into built-in sockets. Parents also have the option of operating the car in a pseudo-Autopilot mode by driving it via remote control. Unlike a Tesla, however, the mini McLaren has electronic engine sounds that are activated by the accelerator pedal. 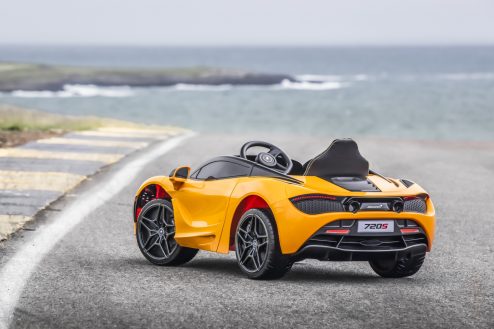 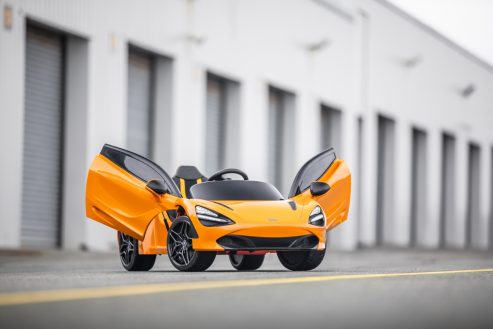 Tesla’s Model S for Kids was produced in partnership with Radio Flyer, a classic toy maker known for its high-quality products. Along with an incredible amount of detail paying tribute to the real vehicle that inspired it, the stylish ride-on includes a Tesla-branded lithium ion battery pack, a charger that perfectly resembles Tesla’s own Wall Connector, working headlights, and even a functional “frunk” where kids can store their belongings. The P90D badge adorns the rear of the vehicle as well, but despite missing the Ludicrous Mode underline, the mini-Model S can double in speed from 3 mph to 6mph via a protected switch. Not one to leave kids hanging on tech, Tesla’s toy also has an MP3 sound system.

The kid-sized 720S isn’t McLaren’s first foray into ride-on toys. A tiny, electric-only powered version of the P1 plug-in hybrid was released in 2016 and a parent-pushed version of the 570S sports car came out in 2017. Both are well-styled and look to serve their purpose of inspiring little riders to sign on to the brand. It’s also somewhat fitting that by the time those same riders are able to drive the adult versions of their playthings, McLaren will likely have a real car out that exclusively uses electricity as a power source, too. The three options available for now, though, are a good bit of fun to start.

The McLaren’s full-sized 720S has a body inspired by the Great White Shark, but whether its mini-me will turn out to be a “Tesla killer” remains to be seen. Perhaps the little Model S is due for a big overhaul.