Tesla has seemingly decided to spice up the road tests of its all-electric truck, wrapping one of its test mules in a stunning matte red color. The vehicle, which has caught the attention of the Tesla community, was spotted on the 405 in LA, before being sighted in the Kettleman City Supercharger.

While Tesla’s silver and matte black Semi prototypes are eye-catching trucks in their own right, there is no doubt that the matte red wrap makes the vehicle downright stunning. Inasmuch as initial sightings of the red test mule suggested that Tesla had produced another prototype, though, details such as the truck’s license plate and its trailer proved that the vehicle was just a wrapped version of the matte black prototype that Elon Musk debuted during the long-hauler’s unveiling.

Unlike prior sightings of the Semi, the matte red test mule appears to have stayed at the Kettleman City Supercharger for a rather long time. Tesla enthusiast and r/TeslaMotors member u/CardSpecialist, who sighted the vehicle in the Supercharger after sundown, noted that he was able to speak briefly with the Semi’s driver. According to the Tesla enthusiast, the driver of the vehicle stated that the red wrap has been getting a lot more looks compared to the truck’s previous matte black paint scheme. 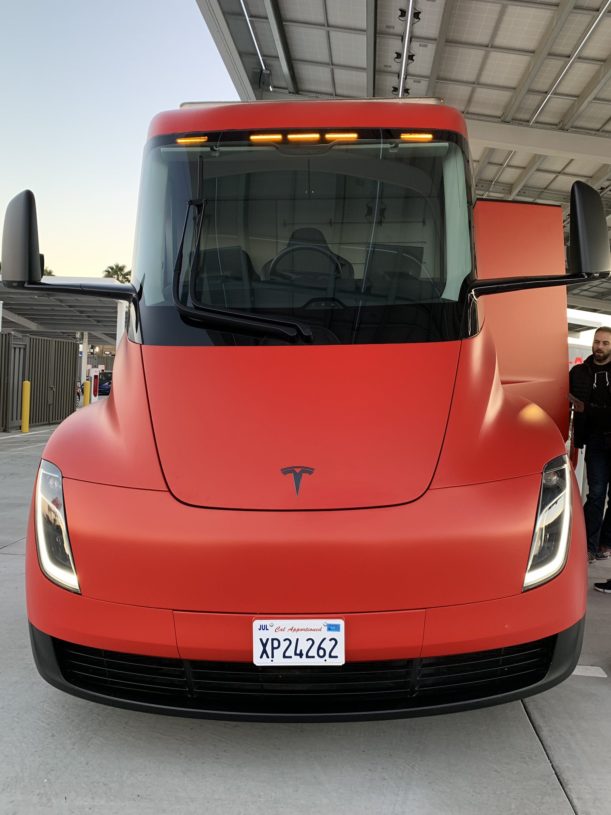 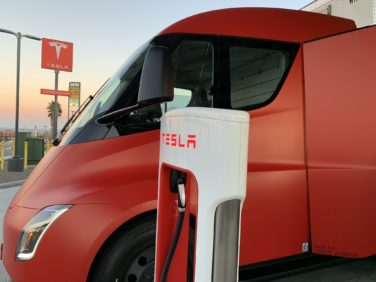 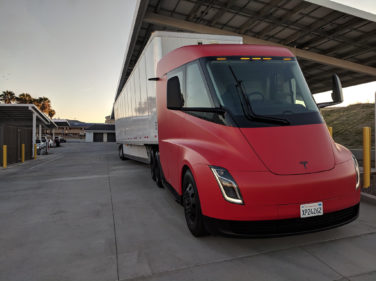 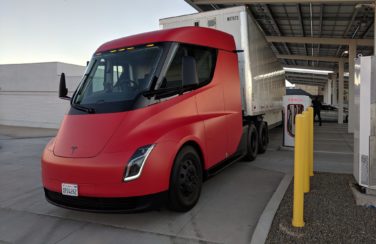 Tesla is yet to provide any details behind its decision to change the color of one of its Semi test mules. That said, the new wrap does make the vehicle stand out more, resulting in more visibility for the upcoming all-electric long-hauler. With such an eye-popping color scheme, after all, the vehicle would likely catch the attention of even more potential reservation holders.

The Tesla Semi might be taking a backseat to the Model 3 for now, but the vehicle has a lot of potential to disrupt a very lucrative industry. To say that the trucking market presents a huge opportunity for Tesla is an understatement, considering that it is responsible for handling the transportation of up to 71% of the United States’ food, retail goods, and other cargo being delivered every day. The American Trucking Associations’ American Trucking Trends 2018 report, for one, noted that the US trucking industry generated $700.3 billion in economic activity last year. This is a market that Tesla could breach if the Semi proves to be a success.

The Tesla Semi definitely appears to have the necessary goods to disrupt the trucking industry. The Semi is a Class 8 truck, allowing it to haul a considerable amount of cargo. Performance-wise, the Semi also stands to shame its diesel counterparts, thanks to its four Model 3-derived electric motors that allow it to accelerate from 0 to 60 mph in 5 seconds flat without a trailer. With a full load, the Semi reaches highway speeds in 20 seconds, considerably faster than its fossil fuel-powered counterparts.

The Tesla Semi is also set to be equipped with semi-autonomous features. Among these is “Convoy Mode,” which would allow multiple trucks to semi-autonomously draft in close proximity with each other. Concept videos of the feature posted by Tesla show one manned Semi leading a couple of unmanned electric trucks. Musk noted during the vehicle’s unveiling that the Semi’s convoy tech is something that Tesla can already accomplish today.

The Tesla Semi is expected to start production sometime in 2019, though later statements from Tesla head of investor relations Martin Viecha suggested that the company would “earnestly” start producing the vehicle by 2020.