Tesla has updated the Model S front seats with a sleeker and thinner design that facilitates better use of interior cabin space and better comfort.

An image of the refreshed Model S front seats can be seen in Tesla’s updated online configurator. They appear flatter than the previous iteration, with the headrest looking more integrated with the backrest, and seat bolsters that appear to be wider. These enhancements bring it closer to the front seat design of the Model X, if not the same.

But beyond the adjustments to comfort and aesthetics, there are other good reasons for the update.

The Model S Gen 1 seats used between 2012 and Q4 of 2014 featured variations of standard leather, textile and performance seats. With reports from owners citing poor lateral support and seats being too firm, Tesla rolled out a second-generation seat in late 2014 through 2015, which had larger bolsters and headrests. The Gen 3 or Next Gen Seats was introduced in 2015 that featured a more sport-like design, with flatter headrests and more pronounced bolsters. These would later be superseded by Tesla’s very own Gen 4 seats, known as Tesla Premium seats that were produced in-house from its new seat factory at the time. 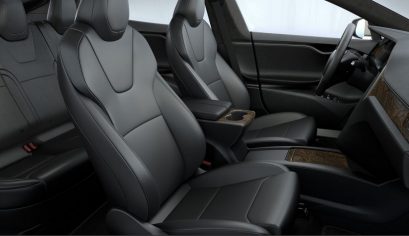 To reduce risks due to supplier constraints that ultimately lead to production bottlenecks, Tesla resorted to bringing production in-house as much as possible, beginning with Model 3. Tesla in its 2018 Q4 update, reported that its manufacturing teams were able to hurdle the bottlenecks and were able to stabilize Model 3 production at high volumes, making headway to become one of the best-selling passenger cars in the United States.

In addition to finding efficiencies in Tesla’s manufacturing process, being able to share components between the company’s line of products also significantly reduces the number of variants customers can order, thereby also streamlining the production line itself.

In the future, Tesla might also introduce new seating material as hinted by a new patent for a fibrous foam architecture that may further streamline the production process by doing away with more laborious and antiquated manufacturing processes.

Tesla Model S is set to undergo a significant powertrain update in late 2020 when the track-ready Plaid variant goes into production. It will have three electric motors and improved cooling architecture that will not be prone to power throttling issues as more commonly found with the P100D trim. Musk noted on Twitter that the Plaid Model S will be expensive but cheaper than the Porsche Taycan Turbo S, which begins at $180,000 before options.