A serious car crash in Hallandale Beach, Florida left a Tesla Model X split in two after a Nissan GT-R alleged ran a red light before slamming into the all-electric SUV at high speed. The driver of the Model X walked away with a minor injury to his leg while the occupants of the other vehicle were brought to nearby hospitals for treatment and are expected to recover.

The driver of the Model X was identified as Jose Diaz who was seen counting his blessings moments after walking away from the incident. In a brief phone interview with 7News Miami, Diaz narrated that the Nissan came so fast that he didn’t even see it and that he just felt the bang.

Eyewitnesses to the scene recall seeing the white Nissan GT-R running through a red light at the intersection of Hallandale Beach Boulevard and Three Islands Boulevard before careening into the rear section of the Tesla Model X.

“I went over to help the guy in the white car, because the car had a lot of smoke, and I thought it was going to blow. He came out unscathed, and he was kissing the floor. It was a little blood coming from his nose, and he said, ‘Oh, I just wanna see my girl,’” said Tony Peart, a witness who approached to help the Tesla driver seconds after the wreck. 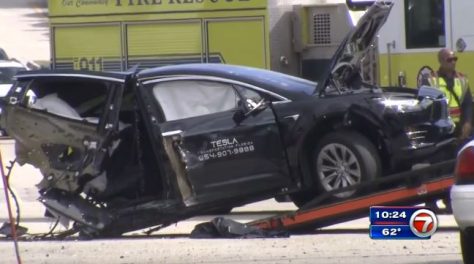 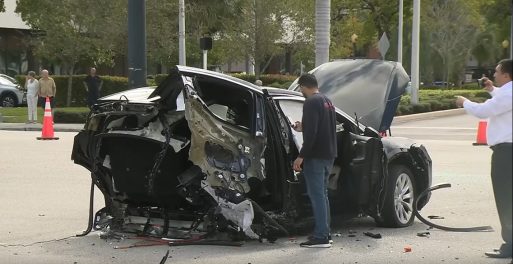 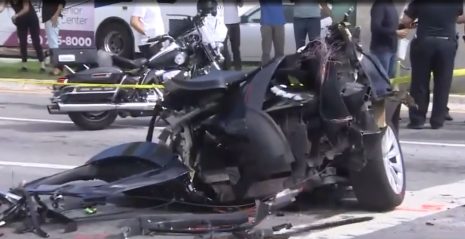 While it’s unfortunate to read about serious vehicular accidents, those involving a Tesla put into spotlight the all-electric carmaker’s award-winning safety features. It is very common to see SUVs involved in rollovers when involved in side-impact crashes because of their high center of gravity, but the opposite is true for Tesla vehicles and the Model X. With its low-mounted skateboard design battery pack, the center of gravity is far lower than traditional combustion engine cars, making it virtually impossible to roll over in high-speed crash testing.

The battery pack outer casing also serves as an extra layer of structural rigidity for the vehicle. Combined with a hybrid of ultra-high-strength materials, and large crumple zones that absorb energy to protect occupants from harm, and it’s no wonder that Tesla owners have touted never buying another car other than a Tesla.

“I waited 4 years for this one and would wait 4 more if that is what it took to protect my family like this” recalls one Model X owner after his all-electric SUV saved his life and the lives of his family after being involved in a horrific crash.

The Tesla Model X was awarded a 5-star safety rating in every category by the National Highway Traffic Safety Administration since its debut. Last December, the Model X was a standout in its class for earning the highest overall rating to date in the 2018/2019 protocol of the  European New Car Assessment Programme (Euro NCAP) for Large Off-Road Vehicles with a near-perfect score of 98 percent in Adult Occupant Protection category.

Tesla’s Q4 2019 Vehicle Safety Report revealed that its vehicles are still 3 to 4x safer compared to the average even without Autopilot and active safety features enabled. With Autopilot on, the numbers are even more impressive at one accident per 3.07 million miles driven compared to the NHTSA findings of one automobile crash per 479,000 miles in the United States.

Tesla Model X splits in half after blindsided by Nissan GT-R, Tesla driver walks away unscathed