Elon Musk is arguably one of the world’s most notable visionaries today, but at his core, he is still a rebel. He rebelled against the conventions of the United States’ space program with SpaceX, and he rebelled against the fossil fuel industry with Tesla. It has never been easy for Musk, as his career is defined by one big risk after another. It is no secret that despite his estimated net worth of $20 billion, Elon Musk still lives on the edge, seemingly teetering on the edge of success or failure.

Marine veteran and entrepreneur Shawn Wylde is also a lifelong rebel. Raised in a chaotic household, Wylde eventually made his way to the military. His path was paved with controversy, as he faced expulsion from the Virginia Military Institute after leading a student revolt against the administration after they overly punished a group of students. From there, Wylde served as an officer in the US Marine Corps, where he was eventually deployed to Iraq. Wylde dealt with a traumatic brain injury and PTSD after his deployment, which resulted in a downward spiral that ended with him serving time in federal prison.

It was during his incarceration that Wylde came up with what could very well be his best business idea to date. While trying to figure out how he could raise money to pay off his lawyer,  the former marine opted to try his hand at designing a clever, hyper-patriotic (and to a point, satirical) shirt that he could sell to fellow military members. His plan worked, and it allowed him to raise more than enough cash to pay for his legal counsel. While in federal prison, the former marine continued brainstorming ideas for his business. After serving time and while on house arrest, Wylde launched his online clothing store — American AF — which features a collection of humorous and hyper-patriotic clothing that pokes fun at every corner of US politics and history. 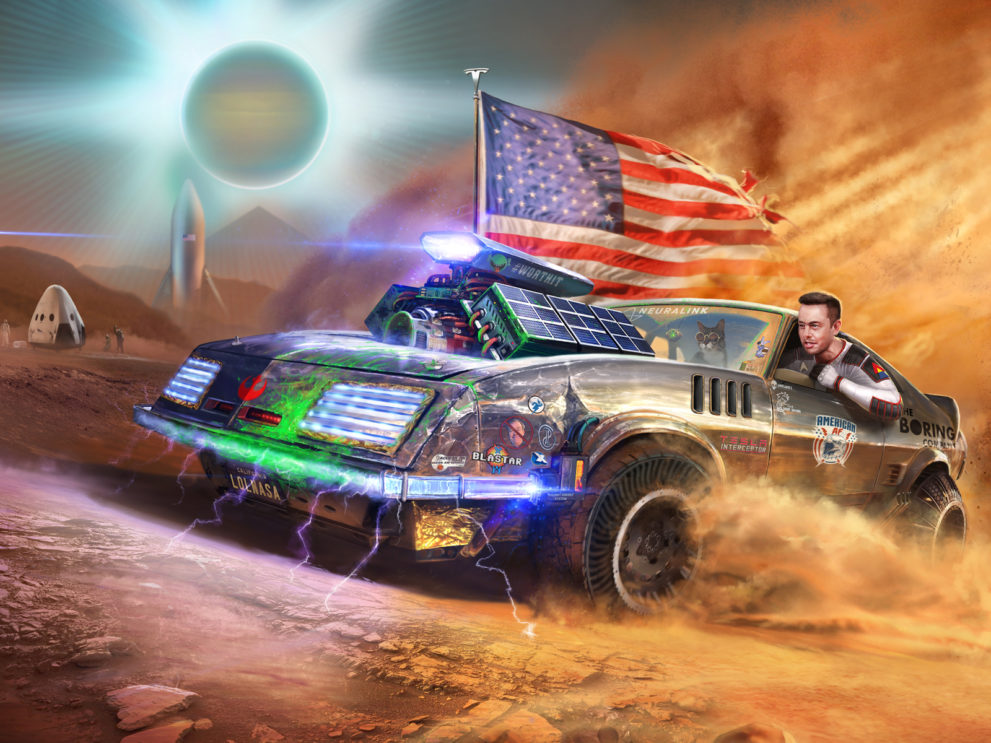 That said, Wylde’s recent project is a step away from American AF’s usual political fare. This time around, the former marine opted to focus on a person that he considers the “entrepreneur’s entrepreneur” — SpaceX and Tesla CEO Elon Musk. Inspired by the post-apocalyptic world of Mad Max, and using his flair for pop culture-inspired humor, Wylde launched American AF’s latest flagship illustration — Mad Musk, which features a determined Elon Musk confidently riding an electric Mad Max Interceptor while fighting aliens on Mars. In a statement to Teslarati, the former marine described his inspiration for the piece in the following statement.

“We tend to idolize the big names in tech, but I think the vast majority of founder success stories could have been written about somebody else, if timing and luck were different. That is, Facebook, Microsoft, Amazon, etc.,  while amazing companies, would have been created by somebody else if not by the founders that got there first. But not Tesla, SpaceX, and The Boring Co. No way these would exist without Elon Musk. I think that’s what sets him apart from the other startup megastars. Also the fact that he keeps starting new companies. Most successful entrepreneurs realize how lucky they were and how brutal it is, and so they transition into being investors.  It’s safe and easy. But not Elon. He goes and invests all his money into insanely risky startups. It’s mad really. That’s why we created Mad Musk,” he said.

In true American AF flair, Mad Musk is riddled with references from Elon Musk’s past ventures notable moments. SpaceX’s Crew Dragon and Starship could be seen in the background, and the Tesla logo stands proudly on top of a flagpole. These Elon Musk references extend all the way to the Tesla-Mad Max Interceptor itself, from the cover to The Hitchhiker’s Guide to the Galaxy, his “worth it” tweet after his run-in with the SEC, solar panels from Tesla Energy, as well as the logos of Zip2, X.com, PayPal, and Blastar, a game that Musk created as a child. Some humorous illustrations in the vehicle also include Jeremy Clarkson (a reference to the former Top Gear host’s controversy with the original Roadster), and a 1990s Calvin Sticker that quite literally targets TSLA short-sellers. Of course, the logos of The Boring Company, Neuralink, and Ad Astra (shown in Musk’s armband) are also prominent in the illustration. 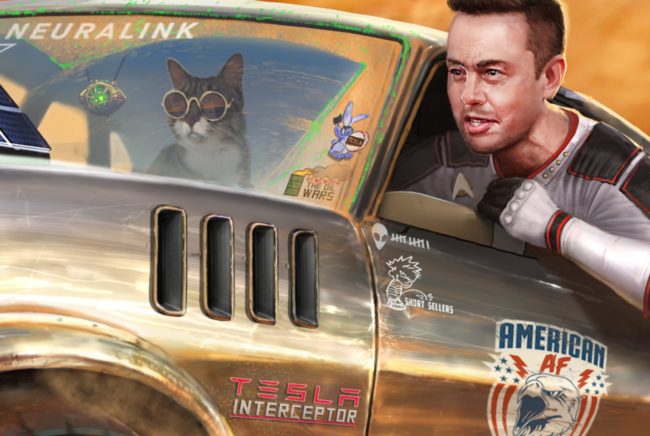 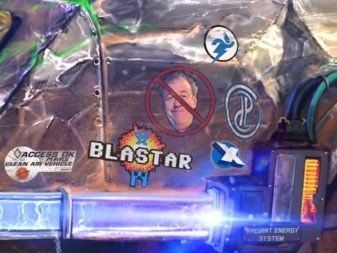 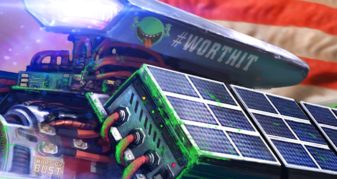 Ultimately, Mad Musk is Wylde’s ode to Elon Musk’s determination and grit, as well as his stubborn refusal to give up. Wylde noted that he actually wanted to work at Tesla since he finds the company’s mission inspiring. Considering that the electric car maker already has someone that’s “a lot smarter” than him, Wylde notes that he might as well help Musk from the outside by showing, in his small way, that the daring CEO pretty much embodies the American dream. Plus, Wylde tells us, “Tesla is made in the USA,” making the electric car and energy company truly American AF.

“After reading up on Elon, I get the sense that he was a child prodigy who suffered a traumatic upbringing that–despite being tragic–somehow resulted in a guy who has nearly unlimited perseverance, passion, and goodwill to give the world. I just think he’s a really authentic, sincere person that isn’t motivated at all by money or power. He’s a creator and engineering is his art,” Wylde said.

In my recent interactions with Shawn Wylde, he mentioned that he really hopes that Elon Musk would like his company’s fun, quirky illustration. That said, the former marine also joked that he would settle for Musk not hating the picture, and for not suing American AF for using his likeness. Shawn also noted that if Mad Musk proves successful, his clothing company would create more dedicated Elon Musk-inspired merchandise, particularly one that features the CEO and a car that he recently reserved from Tesla — a next-generation Roadster.

Elon Musk’s refusal to give up and his raw determination is something that could not be denied. It is this characteristic that made SpaceX and Tesla what they are today. Ultimately, these characteristics have also inspired people from all over the world. Beyond Shawn Wylde and his clothing company, Elon Musk’s daring ventures have also created a dedicated community of electric car owners who promote Tesla through their self-made films, and who are willing to pay it forward when needed.

Below is a humorous video from American AF about Elon Musk being the ultimate “dream weaver.” Do note that Kimbal Musk also makes a very special announcement at the end of the video.