About 3 years ago i picked up an N/A S14 and I did a few bits to it. I drove it every day for about a year and a half. I had the desire to give the S14 a turbo so I picked up a T25 and all of the other bits I needed and just bolted them to the N/A engine. It worked really well, making fairly decent power on the WCP dyno but in all honesty I regretted it almost instantly. It had lost all of the fun of the N/A. This was one of the main reasons I sold it. Below you can see the beauty. Once I sold it I knew I was going to have to get back in another N/A s-body, so about 2 months ago I saw an N/A s15 up for sale which was still in Japan. There and then I knew I had to get it so put a deposit down on it. Timing worked out well, the S15 landed on the Tuesday and the Jeep I was running sold on the Friday. So on the Saturday after work I headed straight to the garage and picked it up. The pictures he had originally sent me showed a fairly decent car but when i got there I was blown away by how good the car actually was, so that was a really nice surprise. This was it when i was picking it up. I only had it for a week and was away from home most of the time, so I got very little time to spend on the car unfortunately, but I did get to service it and got to have a better look underneath. I was delighted with how clean it was. 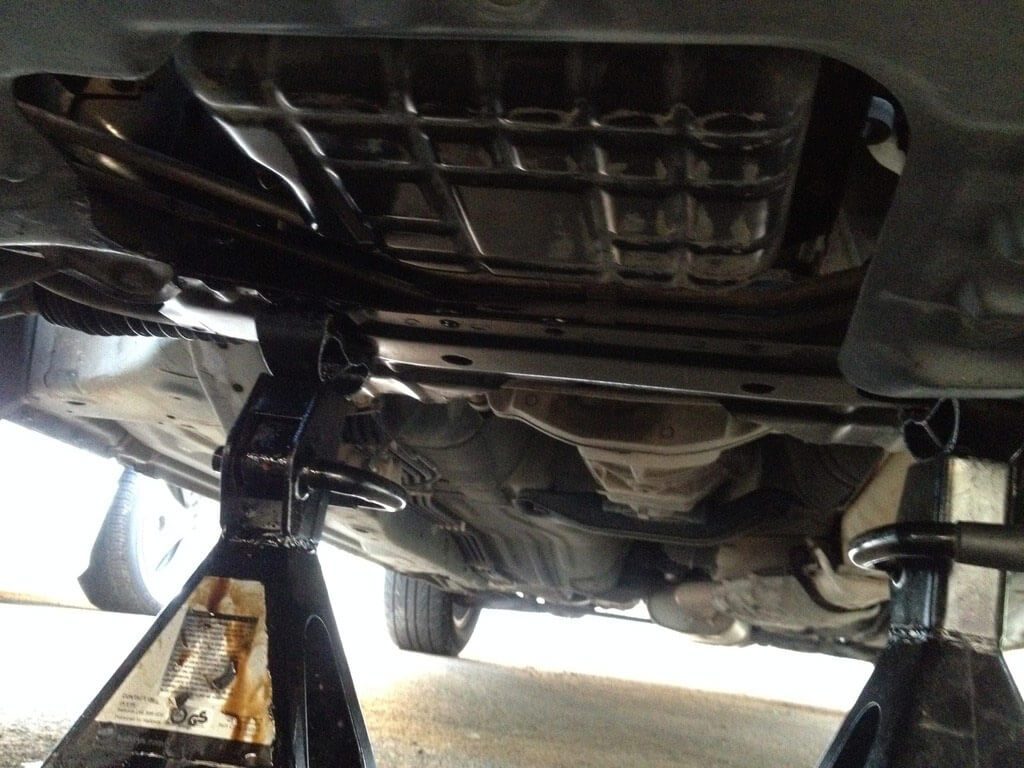 I picked up some nice big Brembo brakes off an Evo 7, with drilled and grooved discs and a pair of Nismo front lower arms to go along with them. A huge improvement from the originals! Actually fitting them turned out to be a bit of a dick. It took me almost a month to get a set of adapters to simply bolt the calipers on and I had to change to a bigger BMC . It was just a time consuming and annoying job overall with a bunch of hiccups and hurdles, but it’s done now. I then had the problem that my wheels wouldn’t clear the calipers which I had sort of expected, until Daren Moynihan put a pair of 8.5″ Blitz O3 rims up for sale. I bought them and they fitted nicely, but shortly after he was selling a pair of 9.5 ” O3’s so naturally I bought those too. I now have 6 Blitz O3s when all I wanted was a pair, but hey ho.

Oh, I also got a new set of HSD Monopro coilovers. 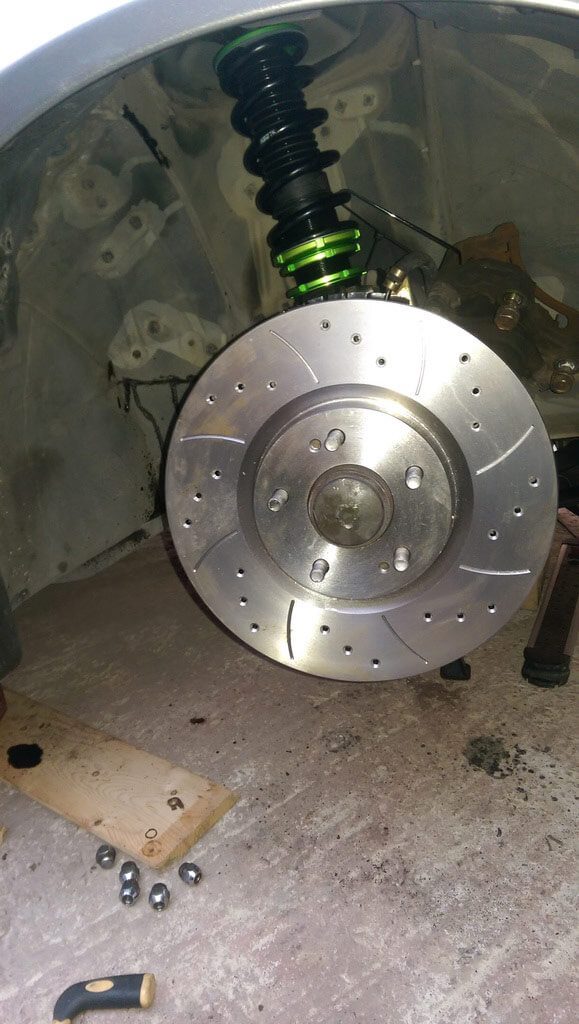 I finally picked up a pair of seats that I had been wanting for a good while. They were a pair of red genuine B-GREOS . I already had a drivers side Bride Rail sitting here for a while so just loosely fitted the drivers seat. After fitting the new seat, I quickly realised a couple of things;
1. I’m a fat bastard.
2. I’m way too tall to fit with the standard wheel. My knees are wrapped around the wheel, so to be able use the seat I’ll need to use a dished steering wheel of some sorts. I already have an NRG snap off kit, but I just hadn’t decided on what wheel to run. I decided to hold off for a while before I decide.

After installing the coilovers, I rolled my arches properly. Cleaned them all down inside and gave them a few coats of stone chip. Once they were rolled I then gave the lip of the arch a few coats of clear just to make sure they would stay protected. But me being a smart twat, I forgot to take pictures as I was going…

I also got myself a pair of Toyo Proxes T1’s for the front end. 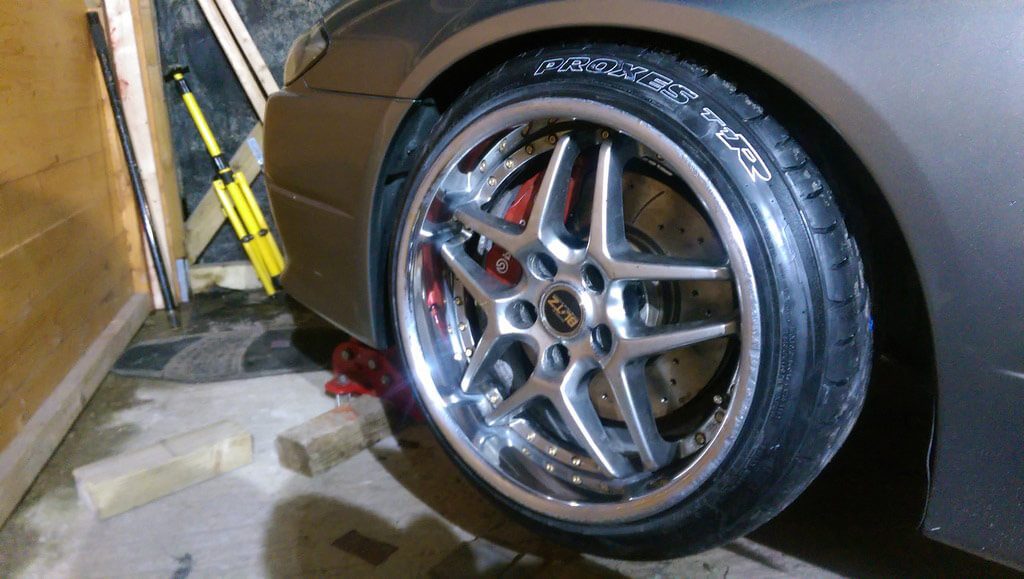 I picked up a DC2 lip and fitted it. I just had to melt the sides with a heat gun to flatten them out so they could reach the length of the bumper, and now it fits fairly well. I just need to paint it!

As you can see I painted the DC2 lip, which came out alright for a pretty half assed job. 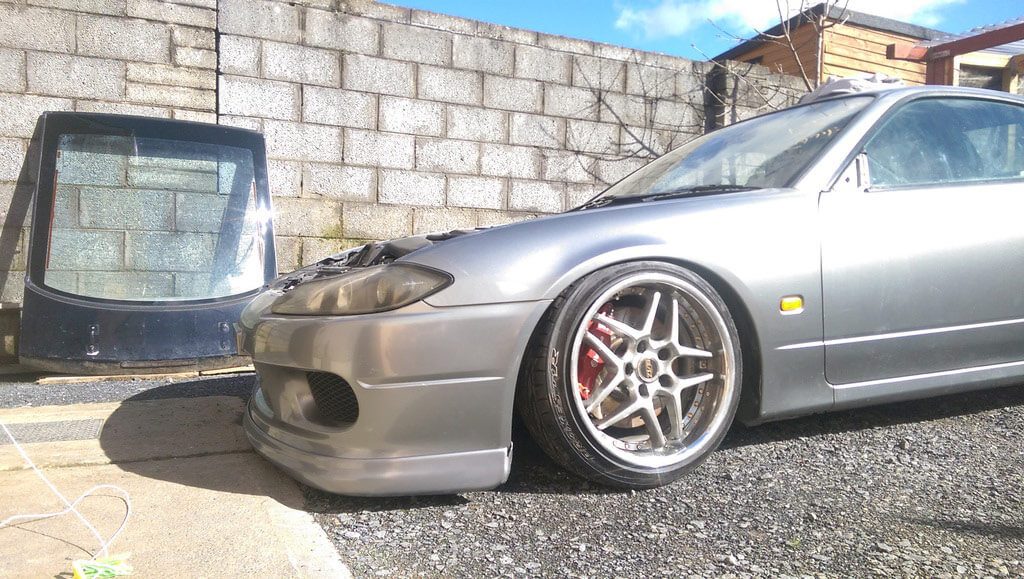 I also fitted the less aggressive one of my B-GREO seats which I fit into nicely. I fitted my snap off boss kit and a small OMP flat wheel that I just had for the drift car. Now I can actually fit into and drive the thing! The OMP wheel will be getting replaced in the near future once I decide what type of wheel I want to run full time. It’s hard to decide what to go for as I prefer a small wheel but it’s very hard to find a wheel in a brand or style that I like. I haven’t taken any interior pics just ones from the outside.

I decided to take it to IGR drifting in Galway for a little fun! I got the car out on track and I’m very happy with it overall. And here’s just another random pic. 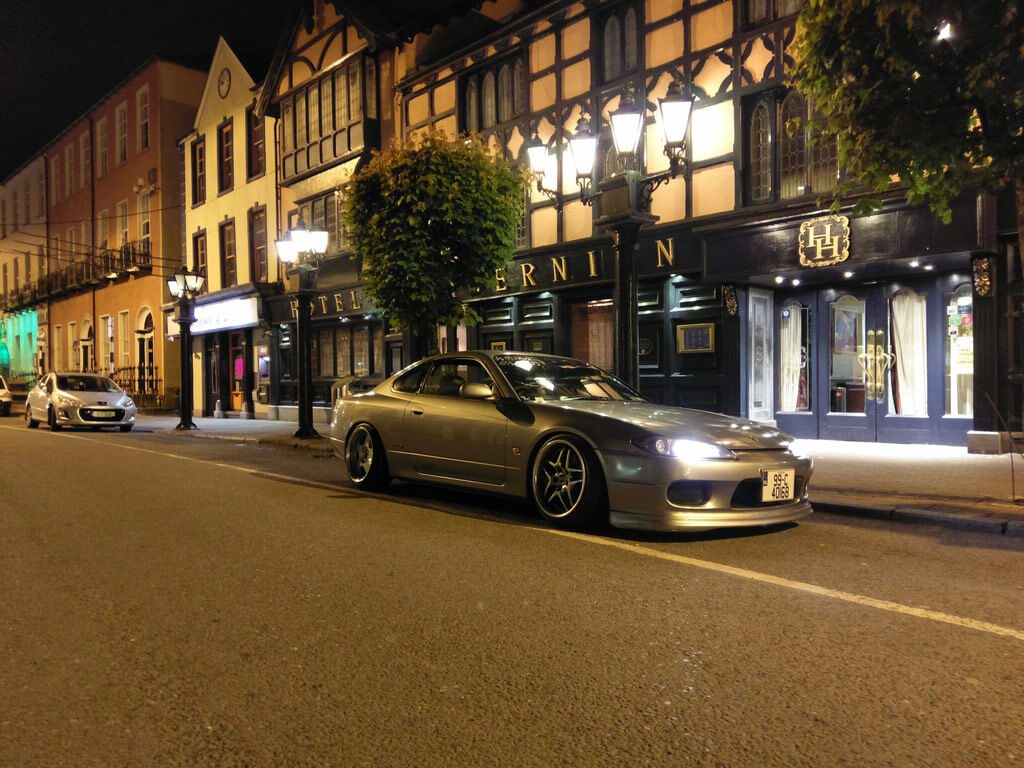 Right. So when I put this on the road it was way too low and the tyres were rubbing the arch linings badly. I ended up raising the front end up around 8mm which helped a bit, but it was still rubbing too much. So… I cut up 2 beer cans and used sealant to secure them. This worked for about 2 weeks until they were fully worn through and now they’ve worn into the hoses at the top of the lining. The loom at the back of the arch has also been worn through.

I’m not really sure where to go from here, I refuse to raise it up so that’s not an option.
I was planning on tucking the loom above the lip on the frame when I take the car off the road around the end of July, but I need to sort it ASAP as I don’t want to drive the car and make it any worse.
I also want to keep the arch liners to stop everything getting caked in crap, so I need to figure something out! I finally got a chance to go at the loom and linings.
I got quite lucky, the top part of the loom was almost perfect and I didn’t have to alter that at all. But… The back of the loom was a bit rough. So i split the loom, re-insulated all the wires and was able to tuck it up into the back corner of the arch and cable tie it there. I then just pulled the rest of the loom up a bit tighter against the frame and cable tied it up there. Job done! 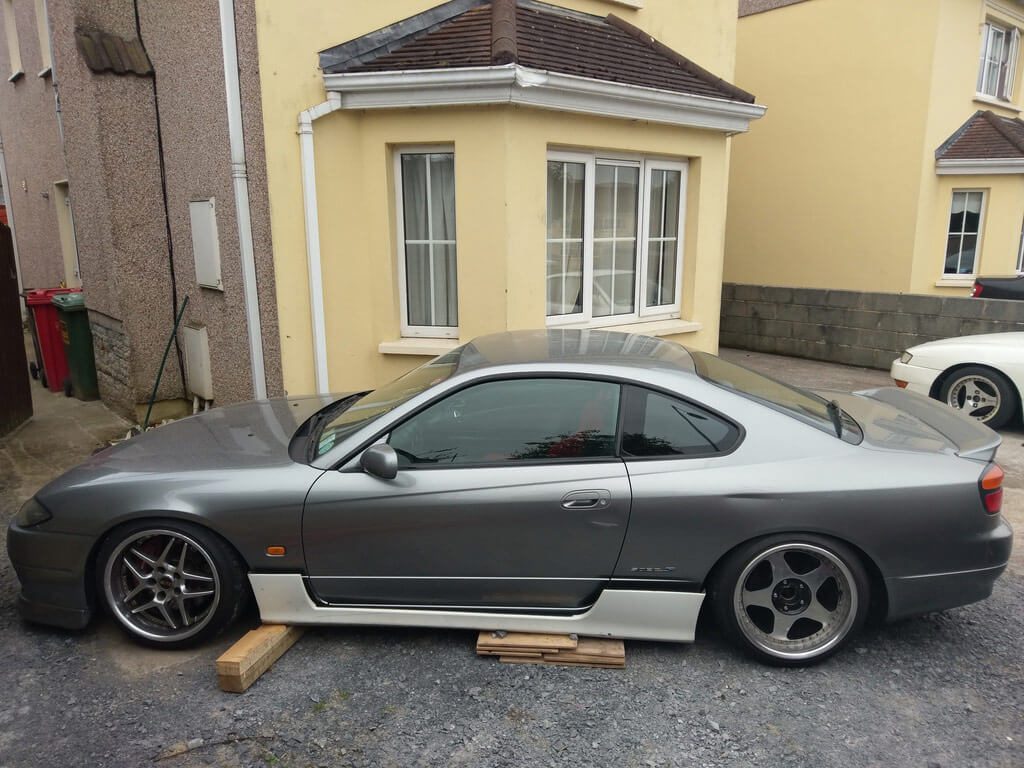 Anyway I got some side skirts as you can see in the picture above! I robbed one of my girlfriends Nissan S14 skirts to just try it out of curiosity.

They looked pretty decent but they were a mile off fitting. Still, they gave me an idea of how a set of skirts would look on the car and I kind of liked them!

A day or two later a guy local to me put up a pair of standard S14 Kouki skirts for free so i nabbed them. I didn’t know if they’d fit but I thought they’d be worth a punt. So I picked them up, put them up against the car and they were surprisingly close. All I ended up having to do was trim a few millimeters off the end of them and make up new end caps. I wasn’t overly keen on how secure the caps were in the end but I’ll come back and fibreglass them on at a later stage.
I decided to paint these with the gun instead of the rattle cans that I had used for the front lip, as I had a bit more time to do these properly. I’m fairly happy with the finish you can see below. 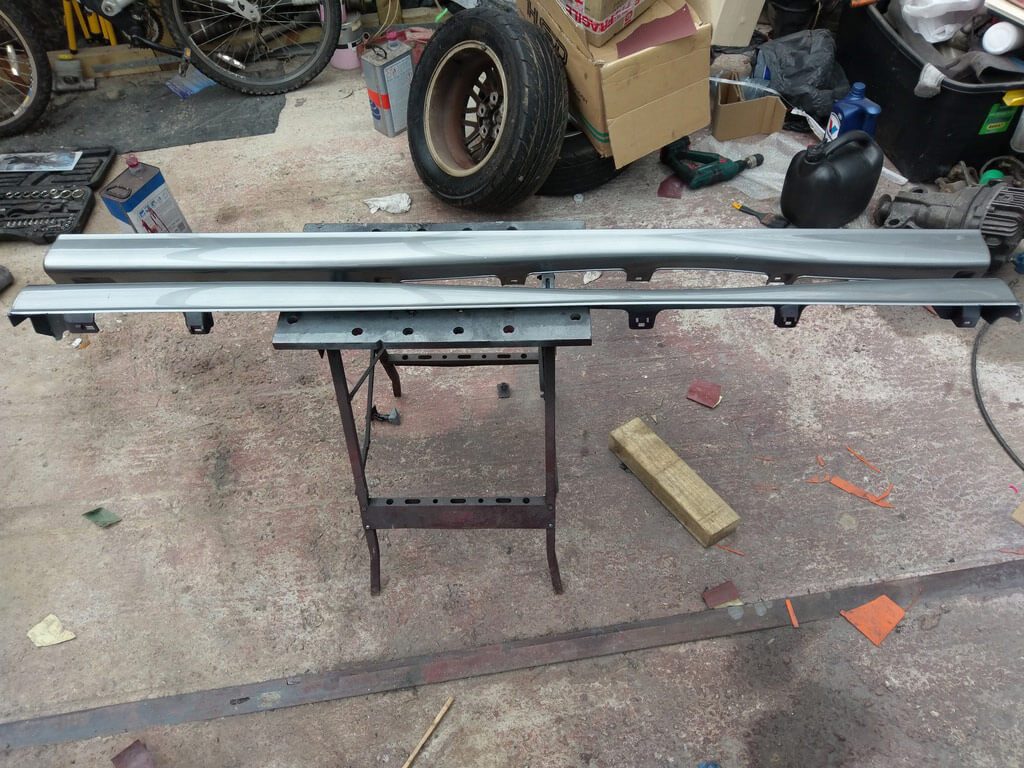 I didn’t bother filling any stone chips as I wasn’t sure that I would even like them, but they’re working fine atm. I might pull them off over the winter and re-do them but I’m happy for now.

Fitting them ended up being a pain. The passenger side went on perfectly first try around. The drivers side took three attempts to get right and as I was using double sided tape to secure them, that ended up being a right struggle. We got there in the end and this is how they turned out, pretty smart I think. 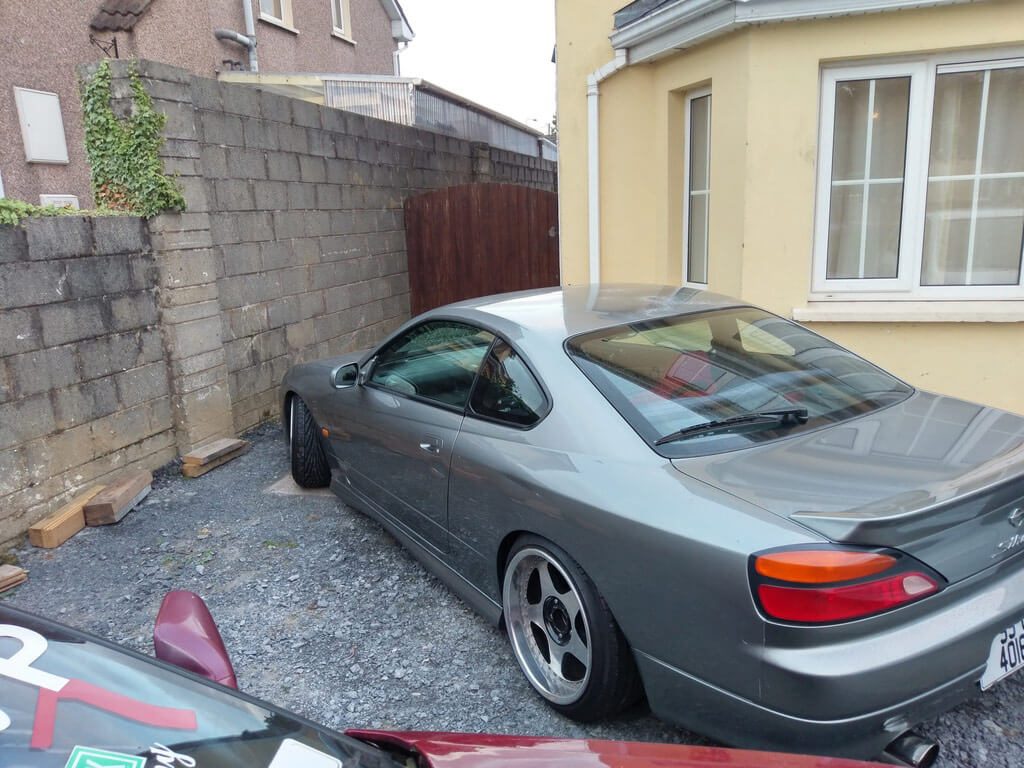 I’m still getting used to them but I think I like them for the time being. That’s pretty much it for now. I’m taking the car to Galway drifting again so hopefully the standard clutch can put up with another full day of abuse in the dry!

Here’s another picture of my N/A drifting experience in the dry. A full days drifting in the dry on a standard clutch and it was flawless, can’t say enough for how well these cars can perform in standard form I don’t get why more people don’t jump on them