If there is one attribute that Elon Musk is known for, it is his relentless drive and his refusal to give up. Musk has taken many risks in the past, and he continues to do so to this day. Both his companies, Tesla and SpaceX, have disrupted their respective industries over the years, and a lot of it was due to Musk’s bold approach and tendency to take high-stakes risks.

Admirers hail Musk as a visionary that is unafraid to toe the line between triumph and failure. Critics, on the other hand, see him as a careless leader who is always one step away from burning out. This week, though, one of Elon Musk’s avid supporters and a Model X P100D owner revealed a project that represents his gratitude to the inspiration he receives from the CEO’ work.

Ben Yang, better known as Ben Baller, is a musician, actor, and jeweler. Known for creating striking, bold jewelry under his brand — Icee Fresh Jewels — Ben has created numerous diamond-encrusted pieces for a long list of celebrity clients, including Kayne West, Drake, Snoop Dogg, The Black Eyed Peas, Mariah Carey, and Joel Madden. In a recent post on his Instagram page, Ben showcased the custom on-off Tesla ring that he is giving as a present to Elon Musk for the holiday season. 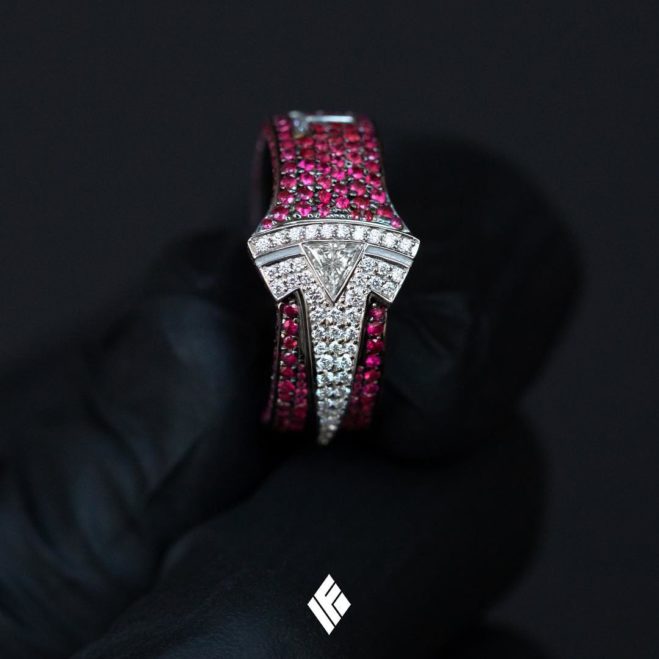 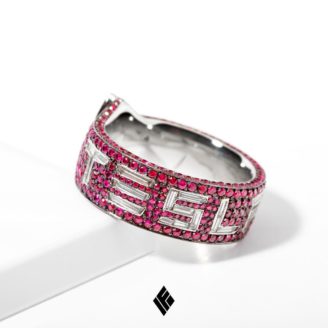 Ben Baller’s custom, 1 of 1 Tesla Ring that he is giving as a present to Elon Musk. (Photo: Ben Baller/Instagram)

Ben’s “1 of 1” Tesla ring features a lot of his trademark design elements. The ring itself is made of platinum, and it is covered by round, brilliant white diamonds and rubies. The focal point of the piece — a Tesla logo — even features a rare, trillion-cut diamond. A series of diamonds also spell out the electric car company’s name.

In the description of his social media post, the jeweler notes that he is giving the ring to Musk because the CEO is an inspiration to him and his business partner, Paul Wall. Perhaps most importantly, Ben stated that he salutes Musk for putting it all on the line instead of retiring comfortably after he tasted success. Following is the jeweler’s message to the SpaceX and Tesla CEO.

Please accept this 1 of 1 custom Diamond and Ruby Tesla ring for being an inspiration to me and my best friend, Paul.

FYI both of us own Tesla Model X P100D’s and both of us appreciate what you’ve done for Americans and the world. FYI I have never gifted anyone a custom piece of jewelry in my career. In fact, I have a long list of clients who are waiting to pay for a piece by me, but they’ll have to wait so that we could gift you this ring for Christmas. Why are we giving you this ring? Because you have motivated me and Paul to level up and push limits. ??

This ring is made of solid Platinum, and I custom cut diamond baguettes to spell out T-E-S-L-A on the back of the ring. On the front of the ring, I set a rare Trillion cut diamond to emphasize the “T” logo surrounded by round brilliant white diamonds(all diamonds used on this ring are VVS1 clarity). The rest of the ring is made of the highest quality rubies all pave set by hand. This ring was designed and created here in America, just like your cars.

We salute you for giving almost 50,000 jobs to Americans and putting USA back on the map as a serious contender in the auto industry. The last successful US car company startup before Tesla was Chrysler and that was 90 years ago. You could have easily retired after you sold PayPal but you bet it all on Tesla, and that takes BIG balls. Much respect. Please tell me where you would like us to deliver this ring.

And thank you for being awesome.

Reports from Hollywood news sites note that the one-off Tesla ring is valued at around $40,000. Elon Musk is also reportedly accepting the unique gift sometime next week.

It is difficult to deny that Elon Musk’s success is largely due to his refusal to pack it up and admit defeat. Both SpaceX and Tesla have come close to death in the past, and in both cases, Musk’s determination allowed the companies to stay afloat. Today, Musk is known as one of the world’s most daring visionaries — one who dreams big and executes on large, ambitious projects. This determination and tenacity was in full display in a 60 Minutes interview during the early days of SpaceX. When asked if he is ever going to surrender, Musk responded with what could very well be his most iconic quote to date.

“No, I don’t ever give up. I’d have to be dead or completely incapacitated,” he said.