On Monday night the sixth-generation Ford Bronco will launch, making it the first Bronco in the company’s lineup since 1996. The off-road SUV available in two or four doors with removable doors and a removable roof will compete with the Jeep Wrangler, much as it did when Ford VP Lee Iacocca approved the first model for 1966. 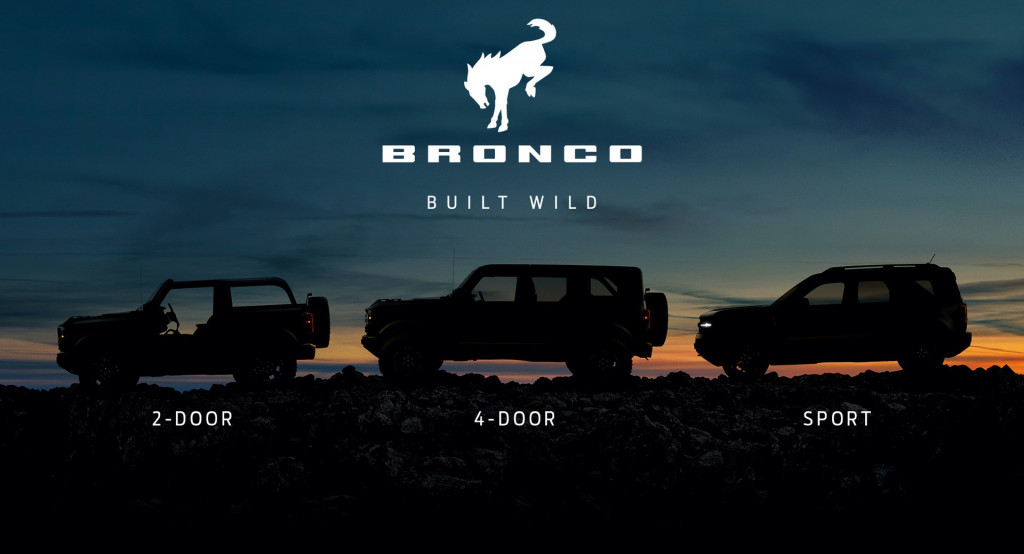 At the time, the Jeep CJ-5 and International Harvester Scout had laid the grounds for civilian-based off-road vehicles that had gained popularity in America in the era following World War II and the Korean War. It wasn’t new ground for Ford. In WWII, Ford manufactured Willys MB-based jeeps known as General Purpose or GPW, with the W referring to the design created by Willys MB. While that would develop into the Jeep brand, Ford made another iteration in 1951 known as the MUTT but didn’t get back into the off-road action until the ‘60s, when it was also developing the other end of the automotive spectrum with the Mustang pony car. 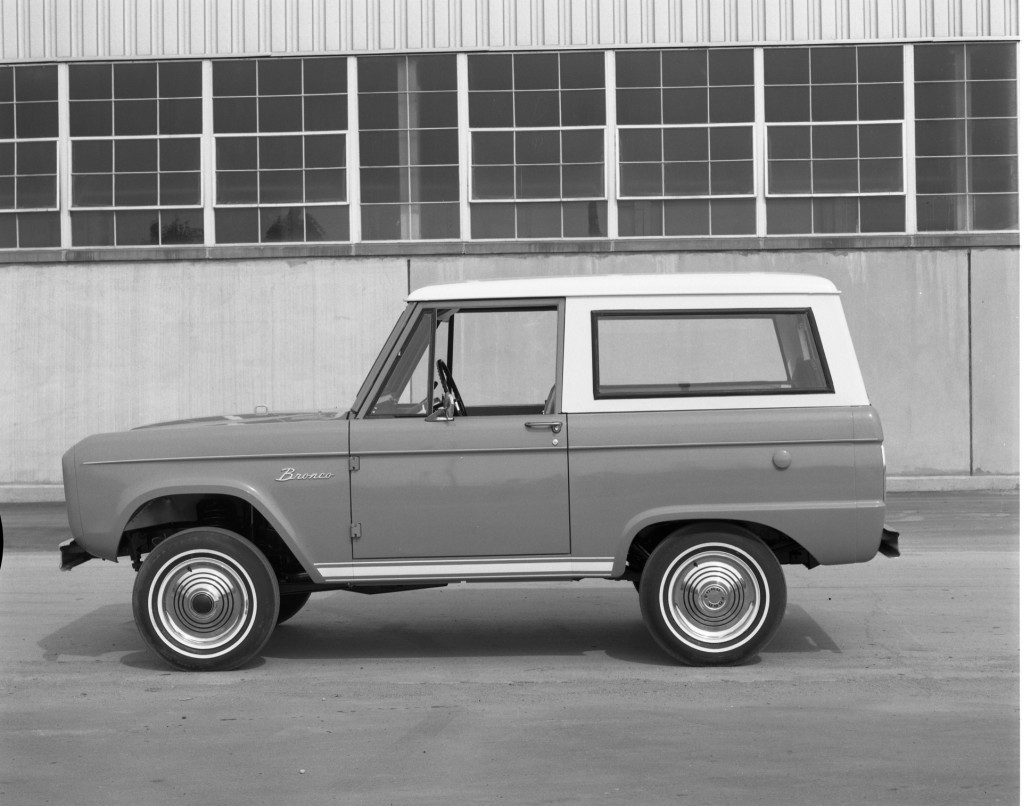 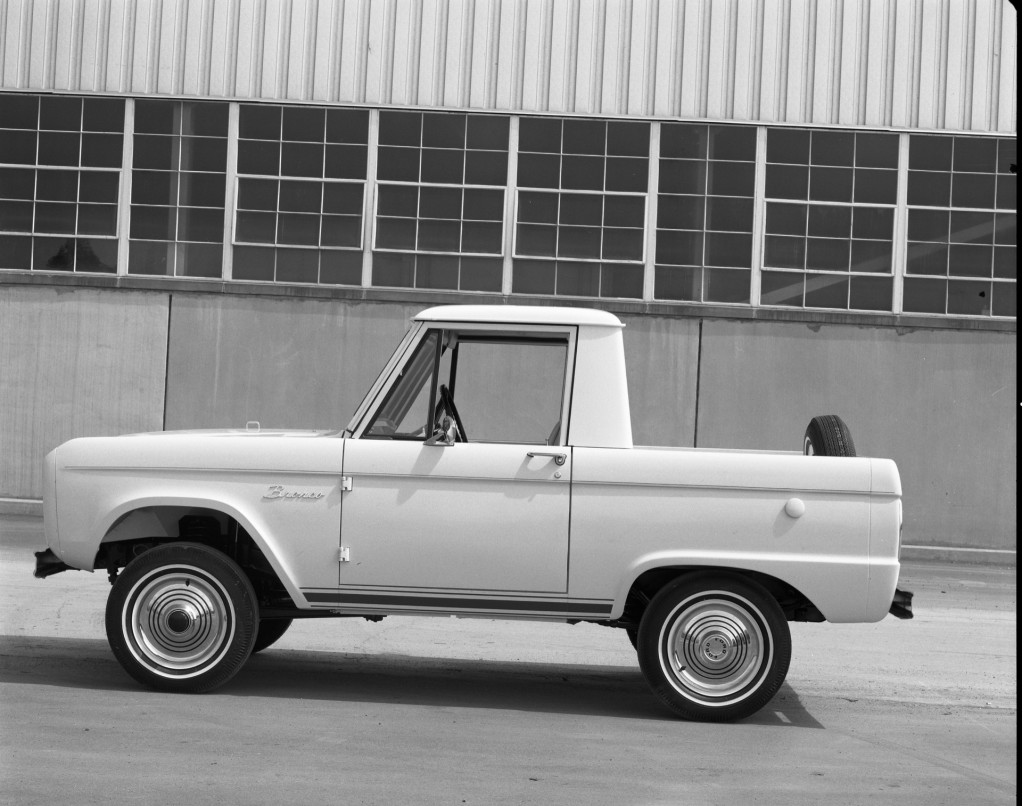 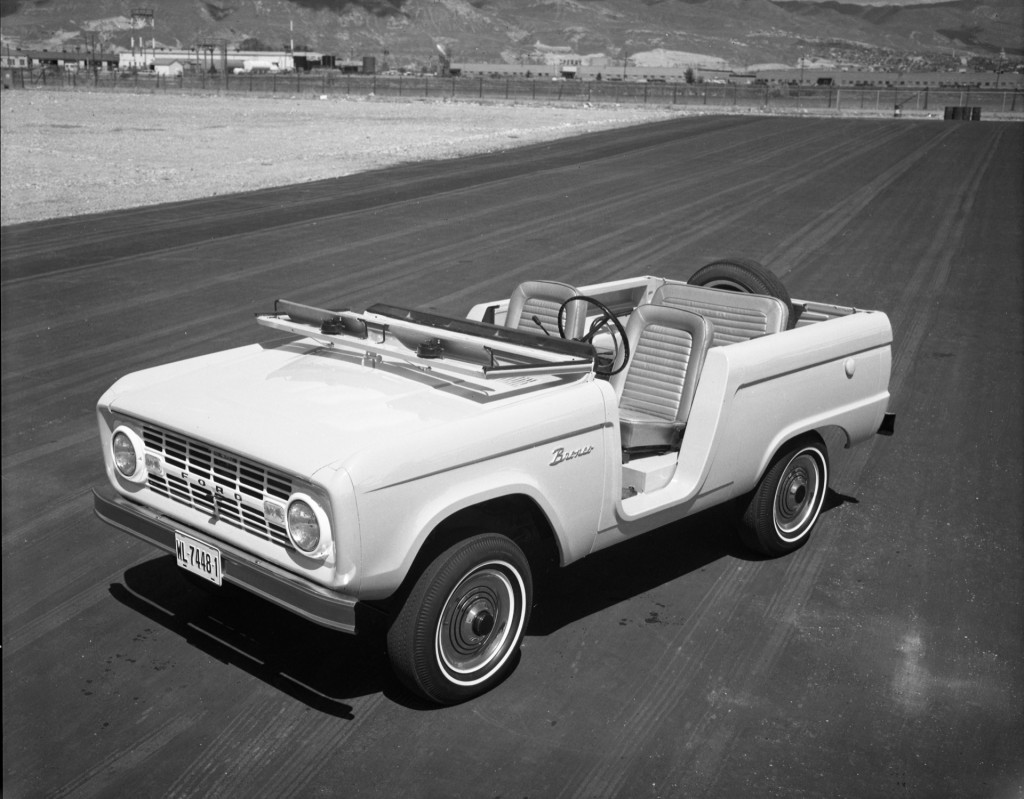 The original sport-utility vehicle came as a station wagon, half-cab, or a short-lived roadster on a short 92-inch wheelbase. For context, the Ford Fiesta subcompact had a 98-inch wheelbase. The base roadster started at $2,400 (just under $19,000, adjusted for inflation), but came with no doors or a roof. The half-cab baby ($2,480) pickup truck left the field in 1972, leaving the three-door wagon ($2,625, or $20,800 adjusted for inflation) as the enduring first-run Bronco. It came with four-wheel drive, a Dana transfer case, a choice between two inline-6 engines or a V-8 upgraded in 1969 to 302 cubic inches, and a 3-speed manual. A 3-speed automatic was offered later to make the bare-bones first-generation Bronco more accessible through 1977. 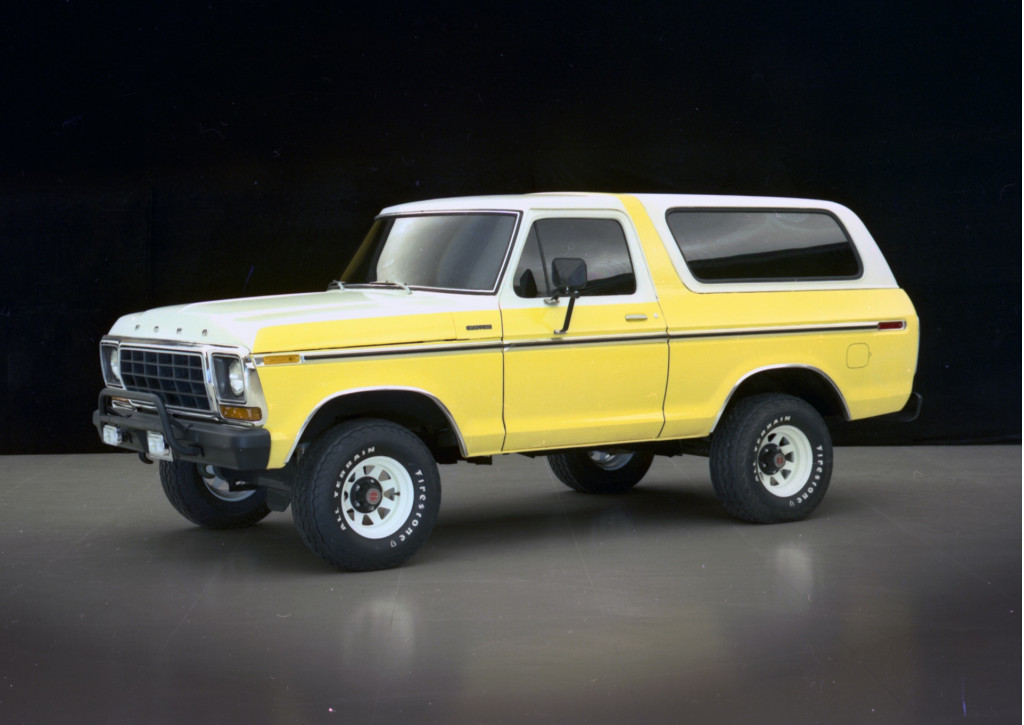 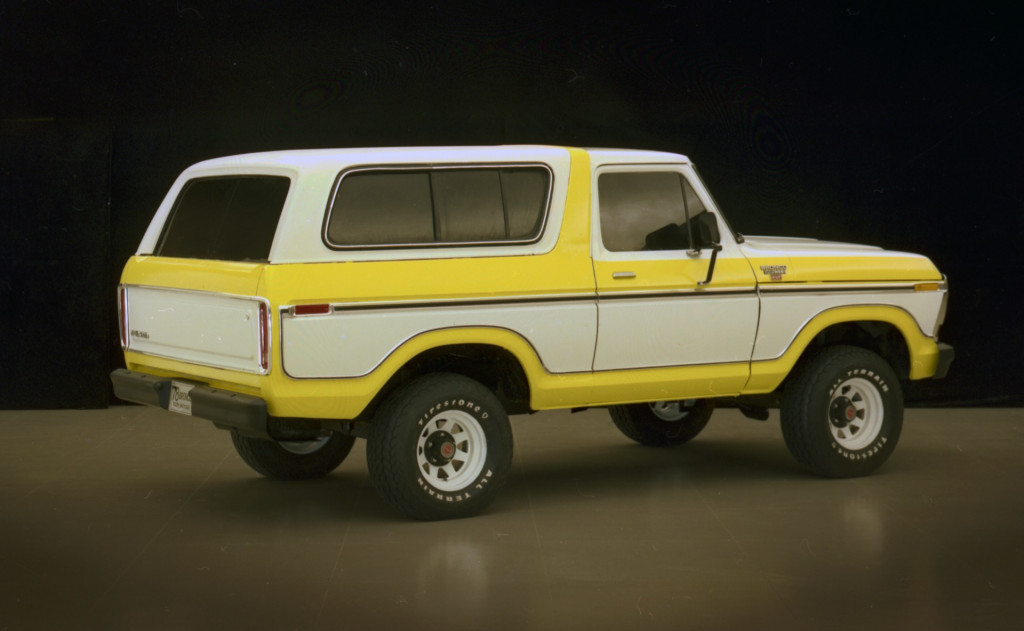 Lasting only two years, the second-generation Bronco adopted a more pickup-like style and was sold only as a three-door. It started at about $6,500, or $25,560, adjusted for inflation. Based on the F100 pickup truck, it grew nearly two feet longer, nearly a foot longer, and was taller than its predecessor at a time when most American car designs were going in the opposite direction in the wake of the oil crisis. The wheelbase extended to 104 inches. 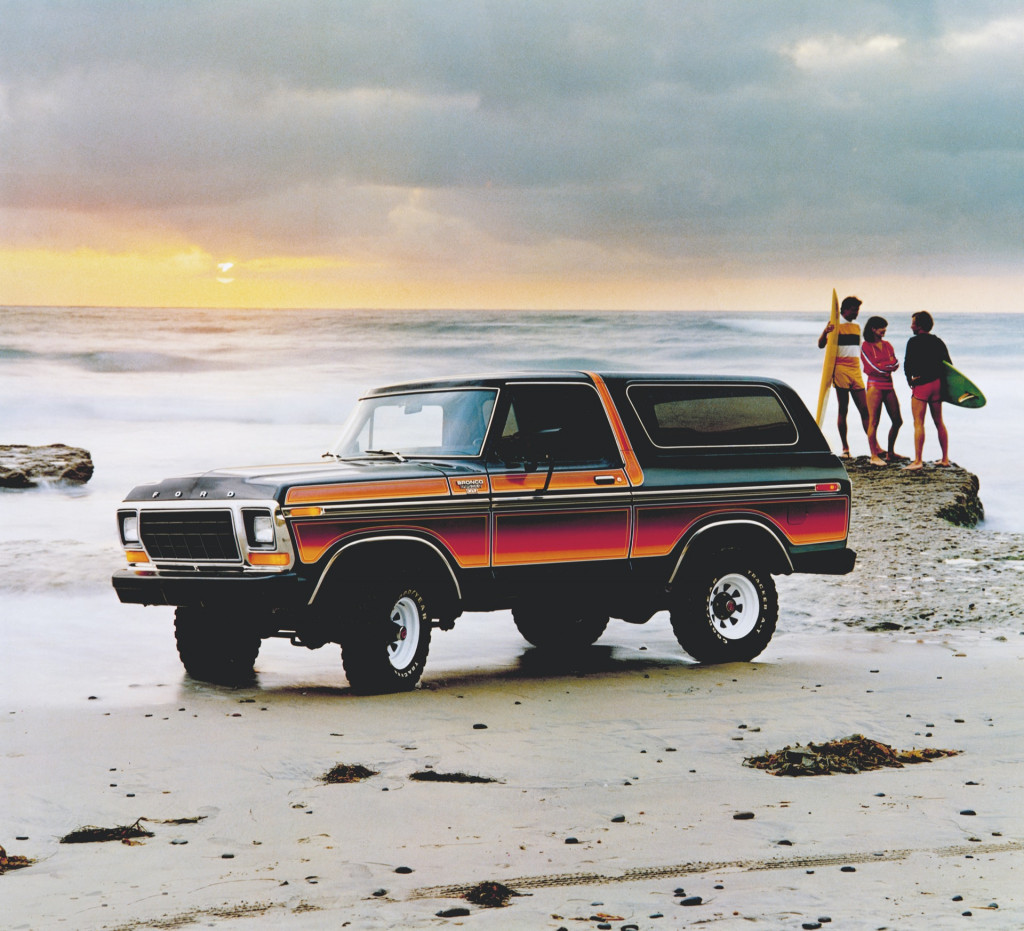 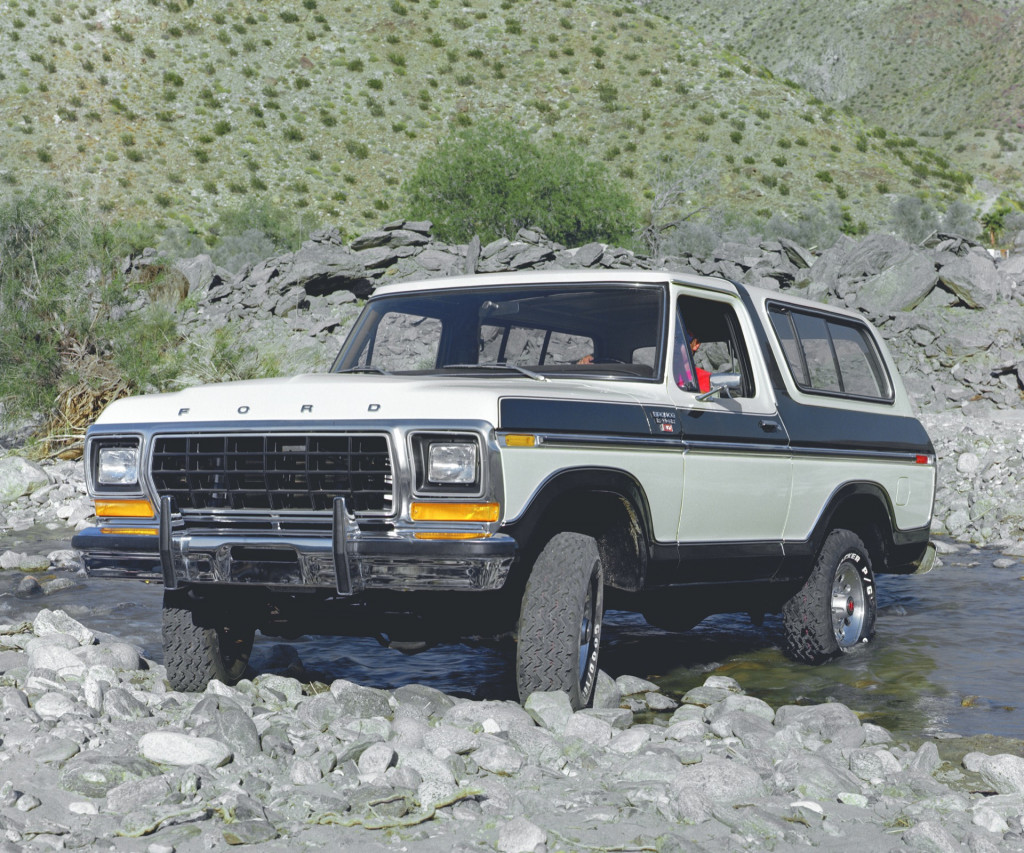 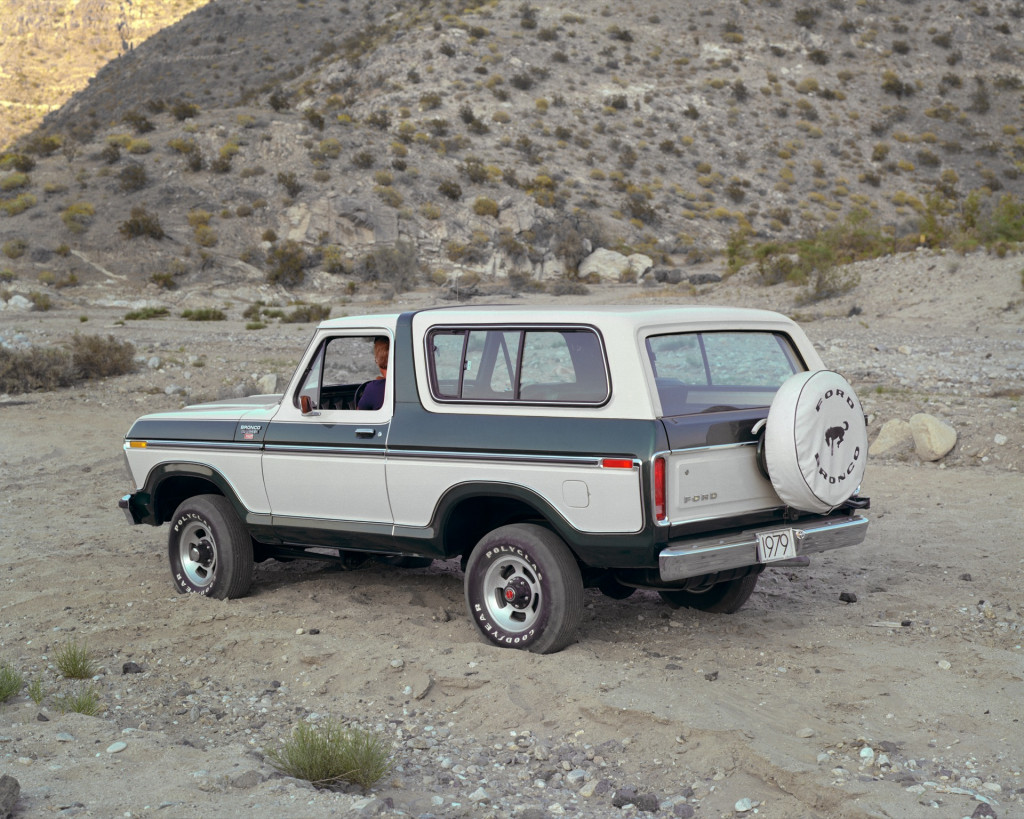 “Its only real resemblance to the old box-basic Bronco of yesterday seems to be its name,” Car and Driver wrote in a review of the 1978 model. The rounded headlights switched to square ones that would define the face of the Bronco for the remainder of its life. It had a removable fiberglass hard top over the rear seat and cargo area. The rear window retracted into the tailgate, and the tailgate dropped down like a pickup truck. It had a four-wheel-drive transfer case with automatic locking hubs for the first time, according to Car and Driver, and was powered by either a 5.8-liter V-8 or 6.6-liter V-8. 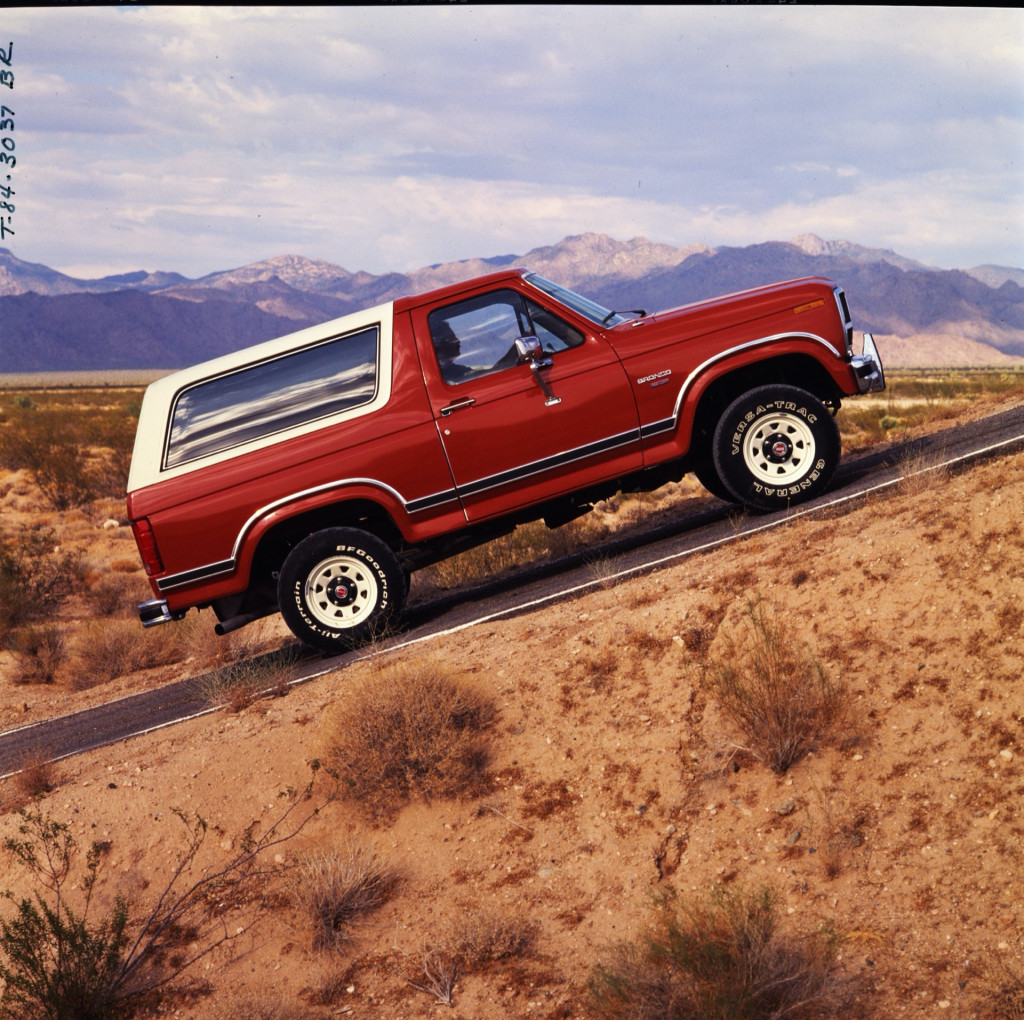 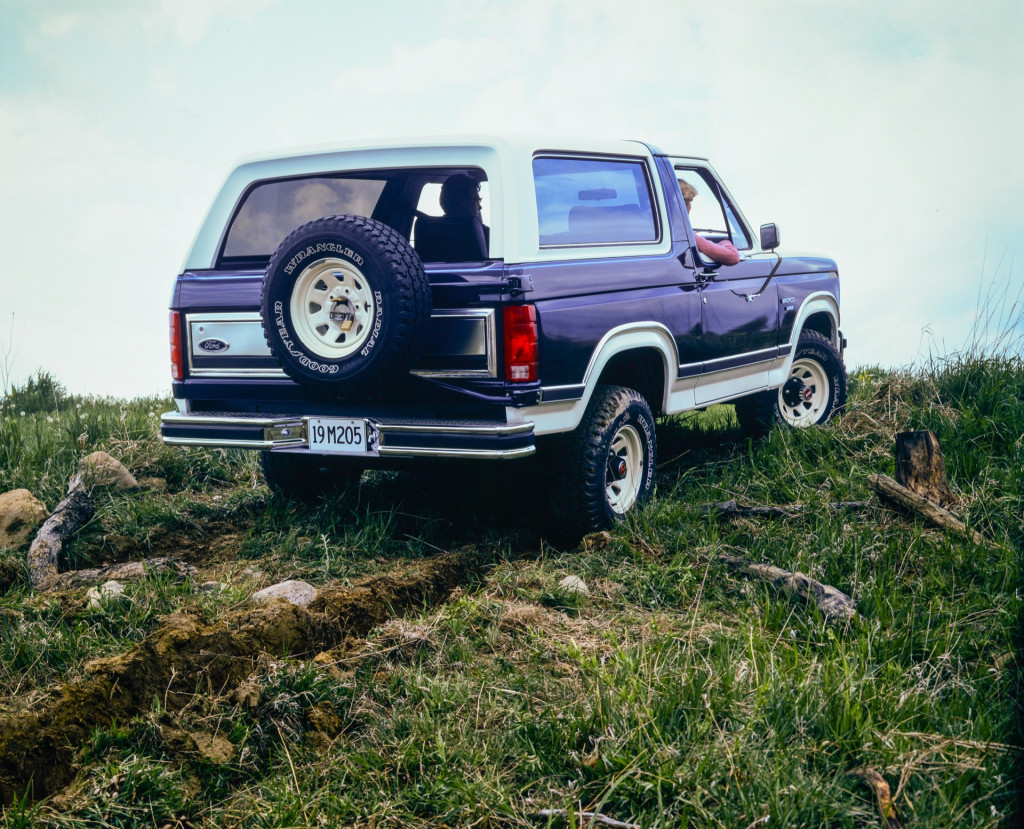 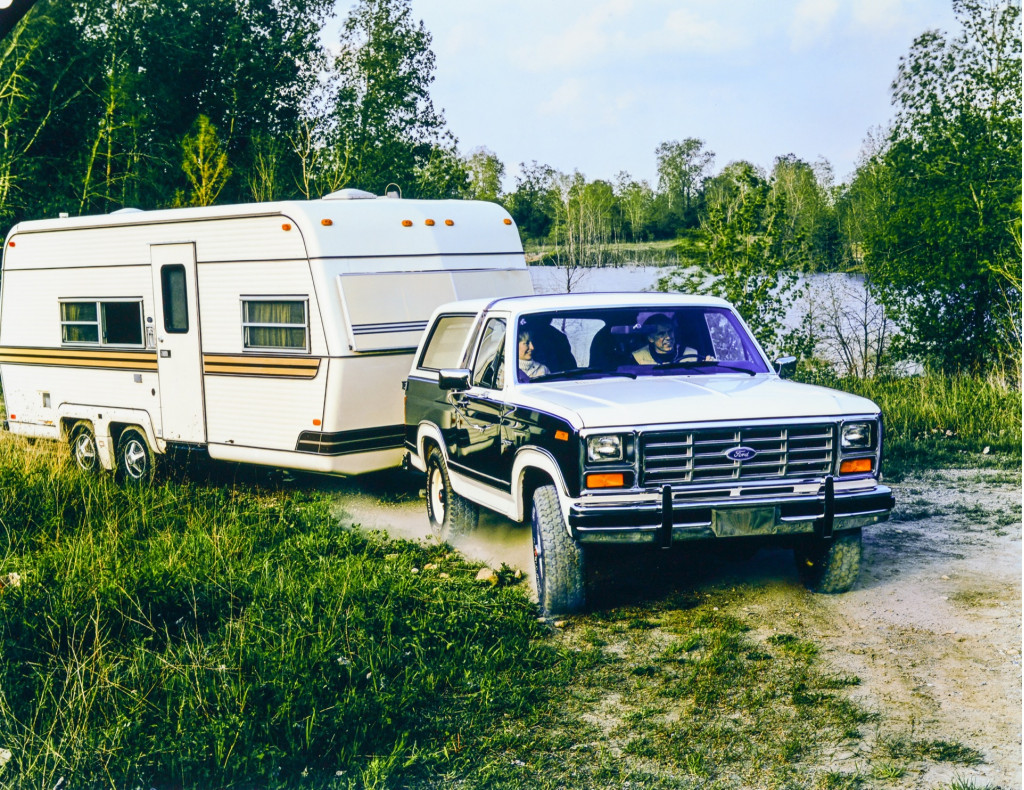 Ford peeled off the letters and slapped the Blue Oval badge on the face of the third-generation Bronco. Based on the F-150 pickup truck, the Bronco also got a bit smaller and lighter to address fuel economy concerns, and came with an inline-6 as well as a trio of V-8s. It started at $8,400, or $26,100 in today’s dollars. The solid front axle was replaced by a swing axle and an independent suspension to address on-road drivability demands that would presage the four-door SUV boom about to happen in the ‘90s. The Bronco also went upscale with the addition of the range-topping Eddie Bauer trim with two-tone paint, cloth bucket seats, and wood trim. (Eds note: Of the hundred of cars owned by my dad, his red-on-tan Eddie Bauer Bronco remains one of my favorites.) 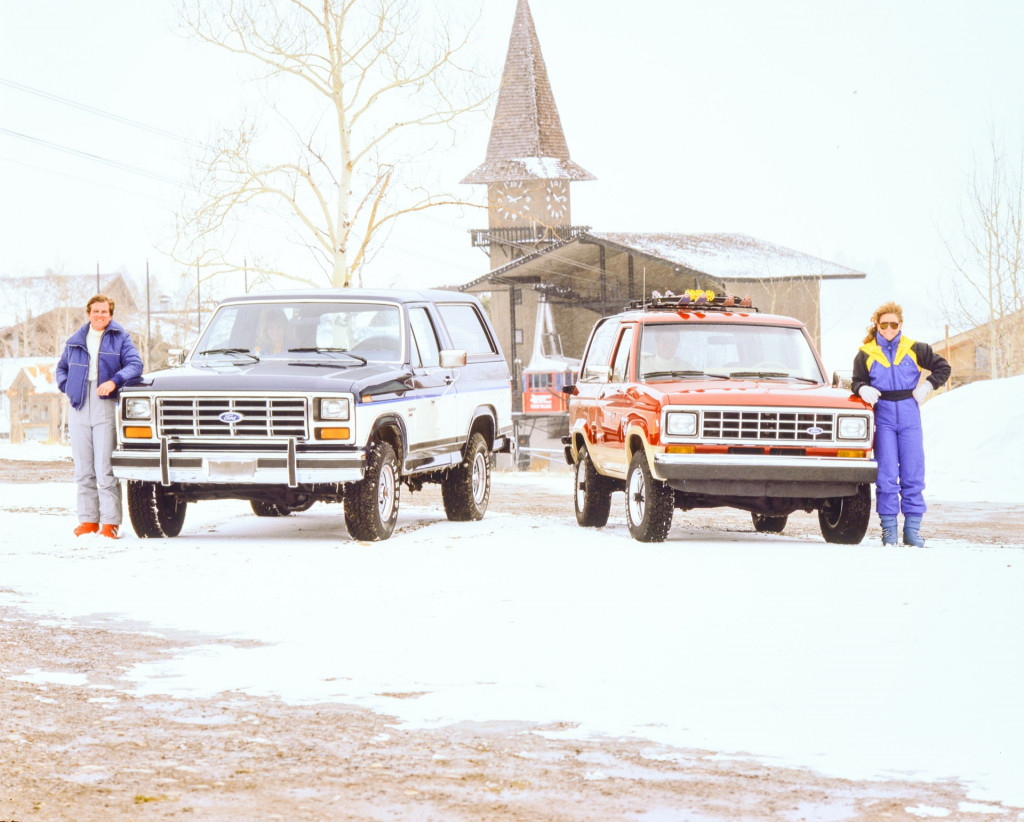 Ford addressed the demand for smaller SUVs with the Ranger-based Bronco II that ran from 1983-1990. Shorter, smaller, narrower, the two-door Bronco II came with four-wheel drive and the choice of two V-6 engines or a turbodiesel-4. A high risk of rollover crashes doomed the Bronco II. 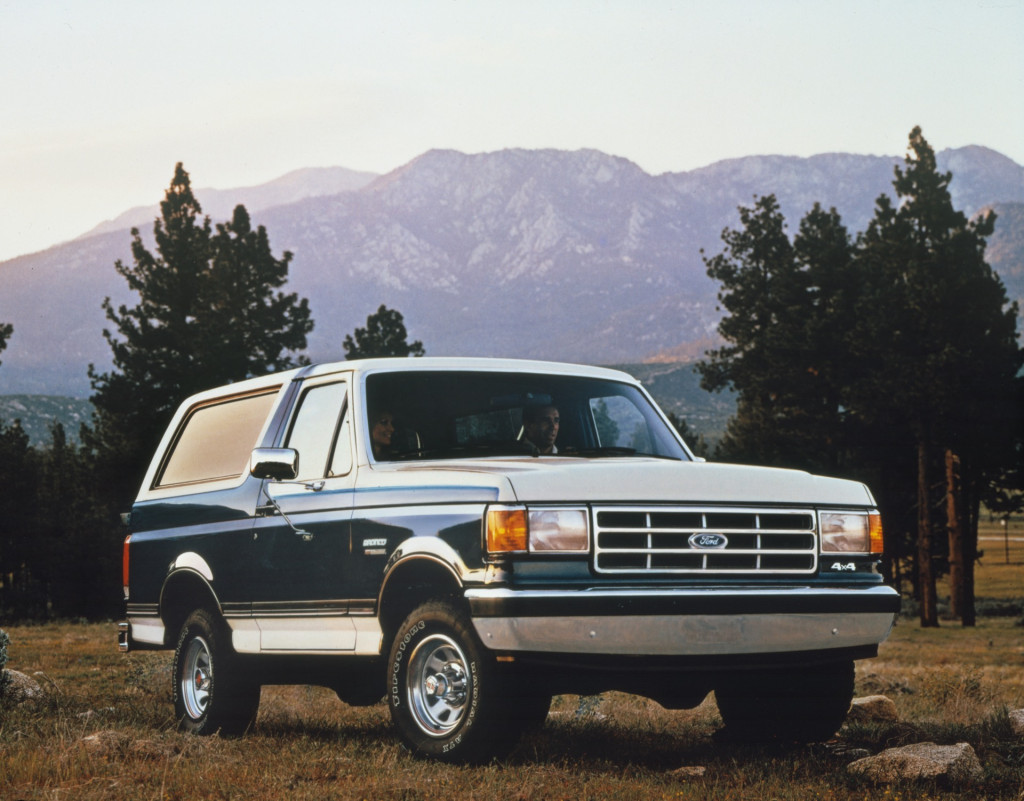 Redesigned alongside the F-150 pickup truck, the new Bronco got some curves on its boxy bod with round wheel arches and wraparound headlights. Electronic fuel -injection highlighted the inline-6, and the V-8s carried over. More safety equipment was added, such as rear-wheel antilock braking, and the four-wheel- drive system could be activated with the push of a button. It started under $14,000, which is the equivalent of $31,600 today. 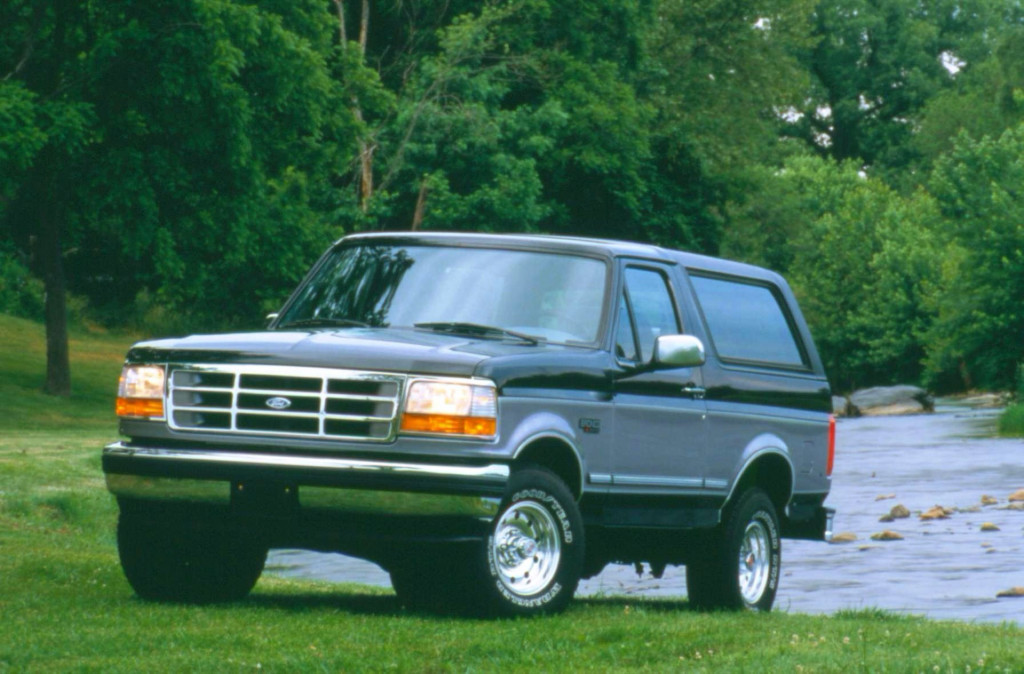 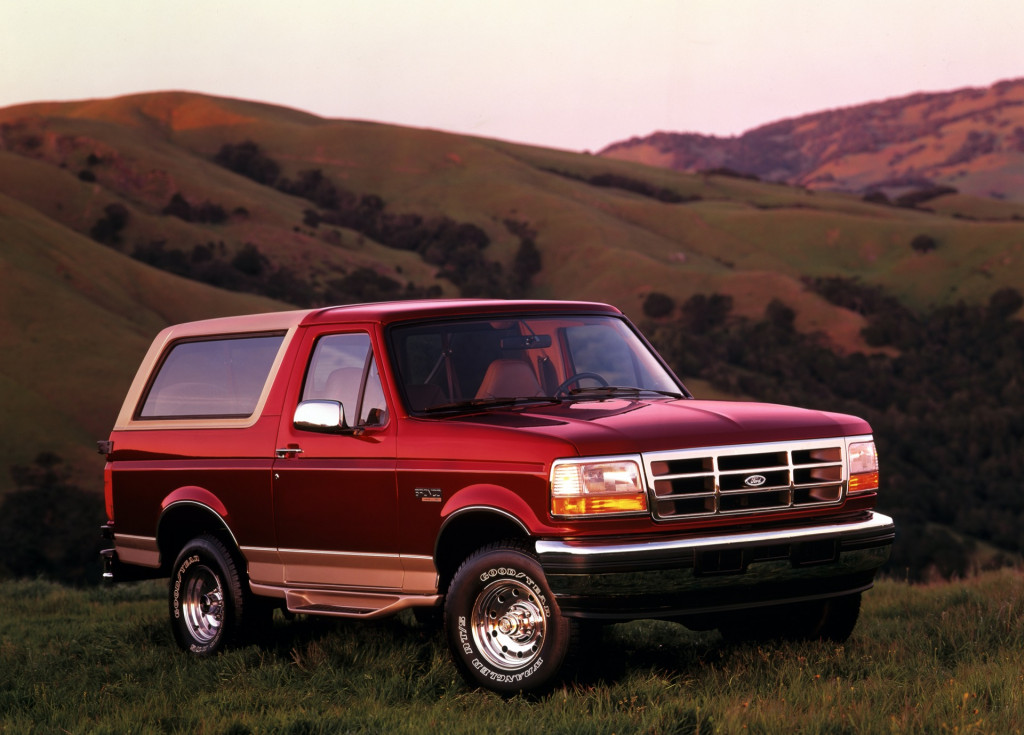 The infamous chase of the LAPD pursuing O.J. Simpson hiding in the backseat of a white Bronco in 1994 had little to do with the demise of the full-size three-door Bronco. The relatively fixed roof (you could take it off if you didn’t mind the illegality or the impossibility of ever getting it to seal properly again) didn’t help, but the market was moving to four-door SUVs on car-based platforms for better road manners. Additional safety systems such as front crumple zones and three-point seatbelts for the rear seats, and a driver-side airbag, made it more user-friendly. It started under $19,000, which is about $34,700 today. The Bronco would eventually be replaced by the four-door Ford Expedition.