The S-Class has been the flagship model of the Mercedes-Benz lineup for decades, but in the shift to electric cars it’s about to at least share that top pedestal with the EQS.

On Saturday the German automaker revealed the interior of the Mercedes-Benz EQS electric sedan and provided new details regarding the car’s design, while confirming some new specifications.

The EQS is set to be a rolling technological tour de force, with an interior set to shame the Tesla Model S into mainstream status while possibly setting a new benchmark by which vehicle interiors will be judged. In short, it just might become this generation’s W126—the template of luxury cars for a generation.

In January Mercedes-Benz revealed the EQS’s Hyperscreen infotainment system, which consists of a 56-inch-wide screen with three control zones, including one just for the front passenger with seven profiles. The interior of the EQS will feel familiar, yet new, for those having spent time in a recent Mercedes-Benz.

The dashboard of the EQS flows into the door panels as if it’s one seamless piece, with a thin ribbon of LED lighting. Intricately detailed metal turbine-like air vents are on either side of the dashboard while the central air vents above the touchscreen display blend into the trim work. The dashboard has a minimalist feel, but unlike a Tesla or other recent Mercedes-Benz models, it all appears integrated rather than tacked-on.

With no center drive tunnel or transmission housing to package around, there are some creative packaging solutions including a large open bin under the center console for a bag.

Quilted leather sport seats, shiny piano black plastic, real wood, metal speaker grilles, and enough LED lighting to throw a rave party for five all add up to what one expects of a flagship luxury vehicle in 2021.

Certain bits, including the rear-seat entertainment screens, door handles, and door-mounted seat controls, appear to be shared with the new 2021 S-Class. That also means carrying over the 12.3-inch digital gauge cluster and 12.8-inch center touchscreen on EQS sedans without Hyperscreen, but that’s not a bad thing. Flagships can share. 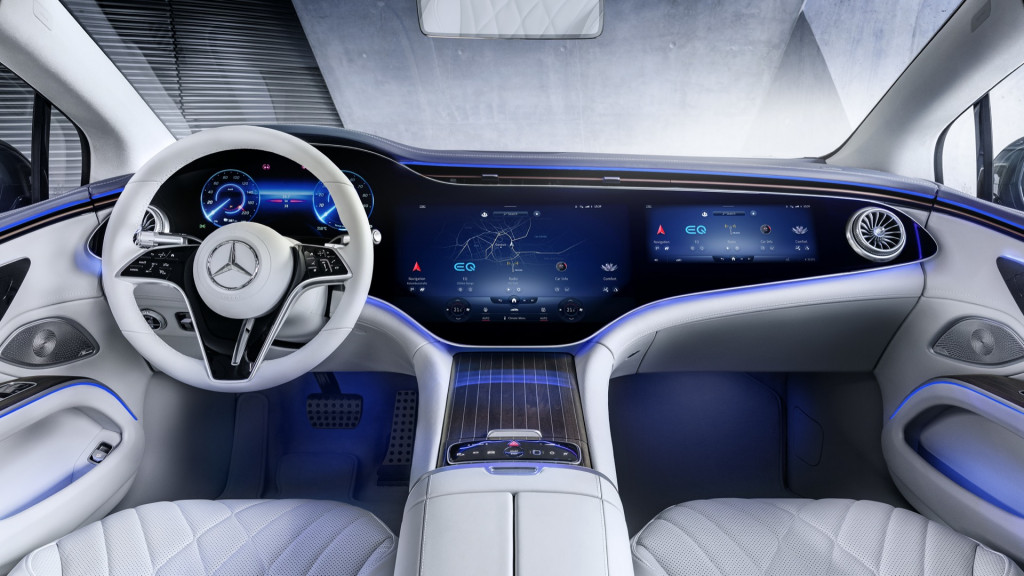 The Hyperscreen infotainment system runs off 8 CPU cores, 24 GB of ram, and 12 actuators under the touchscreen itself to trigger tangible vibrations when a finger touches the screen. There are up to 350 sensors inside the EQS that monitor its functions, vehicle surroundings, and passengers, including both body movement and spoken language. There’s also artificial intelligence on board. Mercedes-Benz said the EQS is capable of over-the-air software updates for the life of the vehicle.

The available Burmester surround sound system in the EQS will feature 15 speakers and 710 watts of power. The 2021 S-Class can be ordered with a Burmester audio system with twice the number of speakers (30), and over double the power output (1,750 watts), but it runs on gas.

We’ve seen spy shots of the EQS sedan, and there won’t be a lot of surprises when the covers come off on April 15. Mercedes-Benz confirmed the electric car’s cab-forward design that is extremely aerodynamic with a coefficient of drag of 0.20, coupe-like roofline, and smooth, seamless body design devoid of sharp lines and creases. A clamshell-like hood overlaps the fenders, and the front will feature a panel instead of a traditional grille to give the EQS a “face,” according to head of exterior design Robert Lesnik. 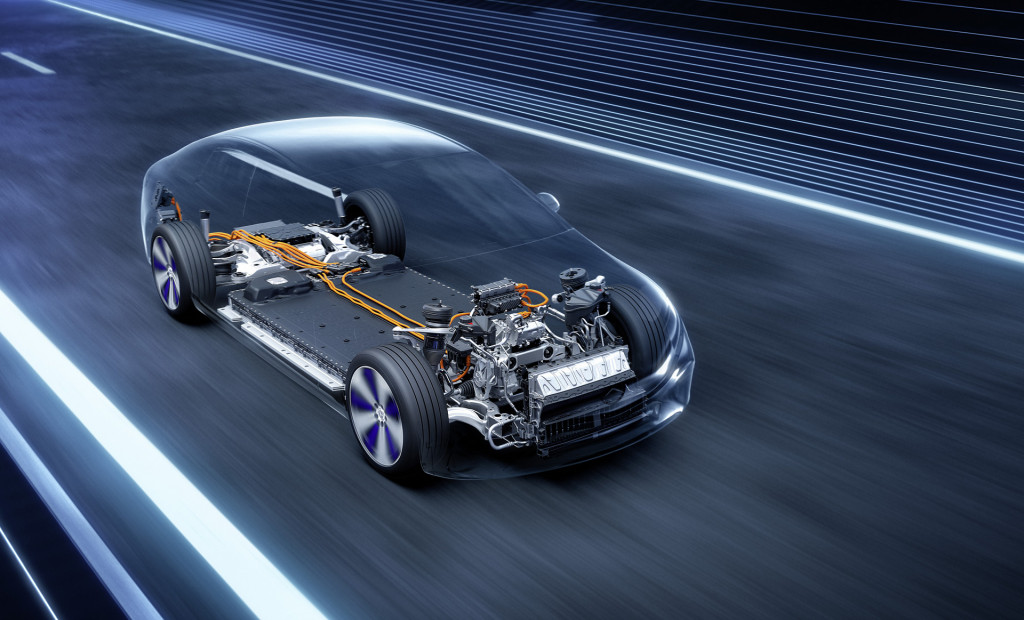 Riding on the new modular EVA platform, the EQS will be powered by a range of lithium-ion battery packs, of which the top 108-kwh version is already in production in Germany. With the large 108-kwh pack, Mercedes said the EQS will have a range of more than 700 kilometers (just under 435 miles) on the European WLTP testing cycle. That should translate to an EPA range rating of about 400 miles.

EQS owners will be able to choose how their electric luxury sedan sounds. Two standard soundscapes will come standard on the EQS dubbed Silver Waves and Vivid Flux, the former is said to be sensuous and clean while the latter is aimed at EV enthusiasts with a crystalline, synthetic sound. A third sound, called Roaring Pulse, will be an over-the-air update that can be downloaded and is said to be reminiscent of powerful machines.

The Mercedes-Benz EQS sedan will be unveiled on April 15 and is due to arrive in the U.S. later in 2021.