It was less than a year ago that Audi announced its intention to enter the 2022 Dakar Rally with a bespoke SUV powered by electric motors, and on Friday we got our first look at the brand with the four rings’ contender.

Called the RS Q E-Tron, the wild off-roader has been designed as a rally raid-style vehicle, much like Prodrive’s BRX Hunter which competed for the first time earlier this year in the 2021 Dakar Rally.

The Audi is a much more sophisticated beast as it is powered by an extended-range electric powertrain that relies on a 2.0-liter turbocharged inline-4 mated to a generator to keep the battery on the boil. The battery is a 50-kilowatt-hour unit that alone weighs 815 pounds.

The wheels are driven exclusively by a pair of electric motors, with a single motor at each axle to form an all-wheel-drive system and software controlling the torque distribution. The electric motors, which feature a single-speed transmission, can also act as generators under braking and help to top up the battery. Peak output is 670 hp, though this may be limited depending on the rules for the 2022 Dakar Rally.

The electric motors are the same Audi uses in Formula E, a sport the automaker will quit after the current season. Audi said the motors needed only minor modifications for use in its Dakar contender. As for the range extender, it was lifted out of Audi’s former RS 5 DTM race car. It will operate between 4,500 and 6,000 rpm, which is the engine’s optimal band for efficiency, Audi said.

Competing in the Dakar will allow Audi to stress test multiple components similar to what will feature in the automaker’s future electric road cars. Unlike Formula E, whose races last just 45 minutes, the Dakar Rally has multiple stages spanning two weeks, with some stages running close to 500 miles in length and lasting multiple hours. The 2022 rally will run through the deserts of Saudi Arabia next January. 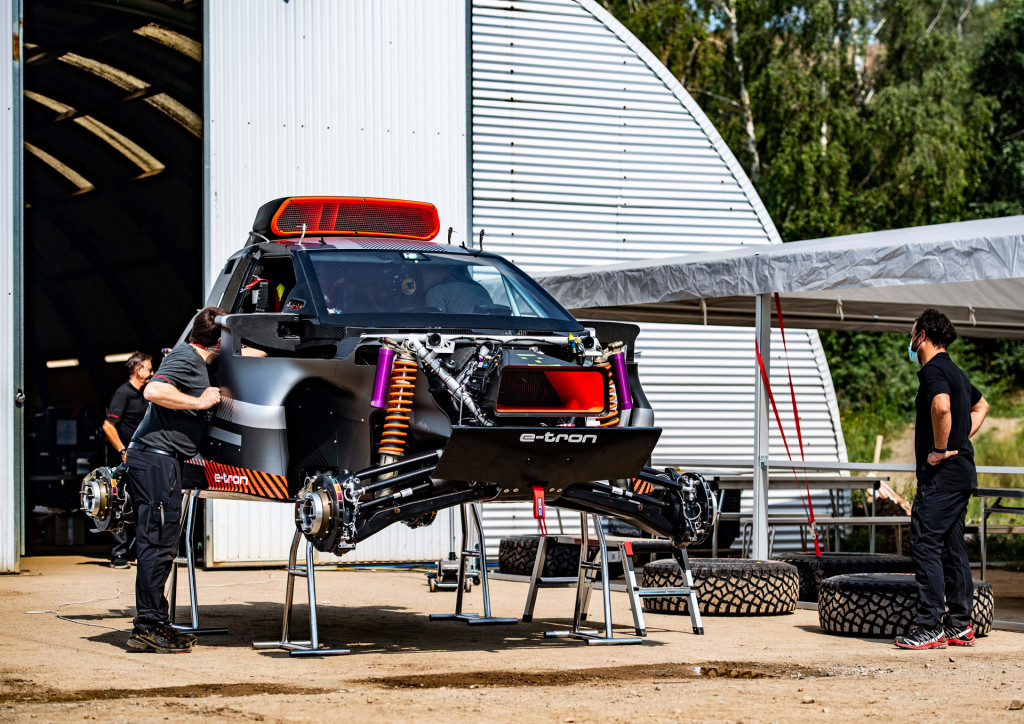 “What we are trying to do has never been done before,” Andreas Roos, head of Audi’s Dakar project, said in a statement. “This is the ultimate challenge for an electric drivetrain.”

Audi has made a multi-year commitment to compete in the Dakar Rally. And while it has never competed in the event before, fellow Volkswagen Group brands Porsche and Volkswagen have experience to call on—especially VW which scored a hat track of wins between 2009 and 2011.

Concurrent with the Dakar program, Audi plans to compete in the new LMDh class serving as the top class of the WeatherTech SportsCar Championship and World Endurance Championship. LMDh’s first season will be in 2023.