The Kyza was perhaps best known for his outlandish digital renderings, turning desirable cars into outrageous virtual fantasies; but as you can see from this widebody BMW E30, those renders have become reality thanks to his brand Live To Offend.

Artists and creative souls have operated with one core aim in mind since the dawn of civilisation: to imagine strange and wonderful things and attempt to spirit them into reality. Sometimes these things exist as solid objects, others as ideas or concepts or dreams, but the crucial element is the bridge between what’s inside the mind and what’s outside. ‘Love is a smoke, raised with the fume of sighs’; a line from Romeo and Juliet in which Shakespeare wasn’t trying to be lewd – at least, not overtly, although he was always up to something, wasn’t he? – but instead was encapsulating the nature of love manifested by that most deeply personal and intimate of sounds: when you emit a sigh of passion, there really is no more honest or truthful expression of your pleasure.

In the case of the outrageous widebody thug of a BMW E30 you’re looking at here, that couldn’t be truer. But the smoke here isn’t merely the manifold sighs emitted by its mastermind, Khyzyl Saleem, nor Parm Panesar at The Tuning Store who conjured it into being, impassioned as they are by the myriad custom alterations they’ve made. No, we can throw in the crackling hydrocarbons of high-octane fuel and the whiff of scorched and atomising rubber into this heady soup of fumes – the love for these people and this car builds upon Shakespearean intimacy and takes us to a whole other realm. 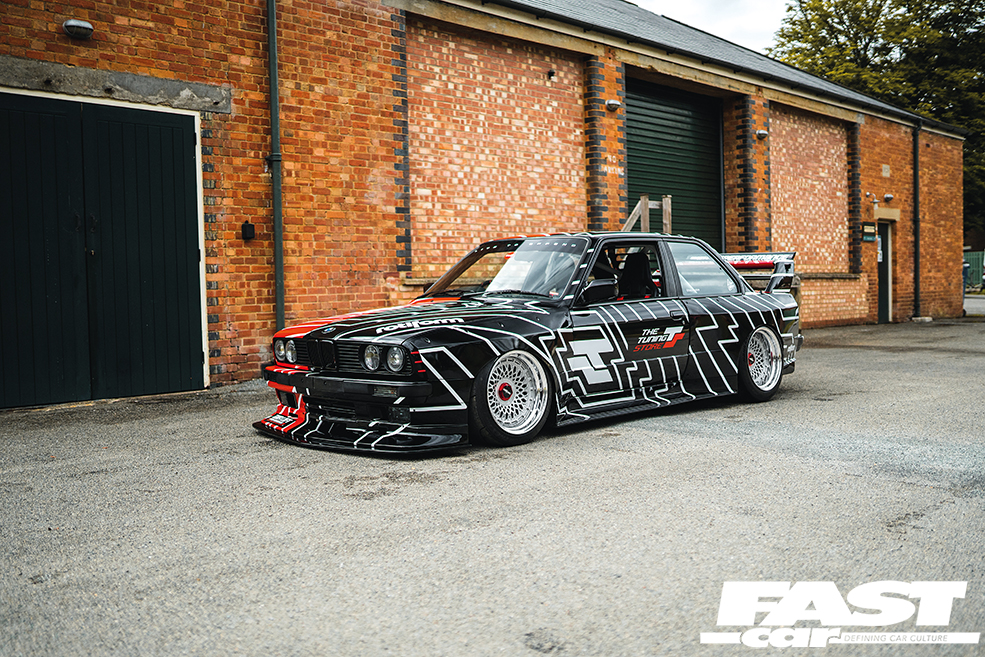 We’d imagine that for the majority of readers, Khyzyl – aka The Kyza – will need no introduction. A self-taught conceptual artist, he acts as a sort of cultural disruptor, his love-or-hate digital renderings taking recognisable automotive forms to strange new places; a Ferrari F40 converted to a bustle-backed breadvan, a bagged and gold-plated Rolls-Royce Silver Cloud, a lifted all-terrain Lamborghini Miura – his online art serves to create the type of astonishingly naughty cars that nobody would ever dare to build… until now. You see, with the Live To Offend [LTO] brand, his renderings are being refined and hand-crafted into actual real-world cars.

“LTO is a company that I put together with my business partner Eric, split between the US and the UK, as a platform for me to bring my renders to life,” says Khyzyl. “I’m kinda known for doing crazy work on certain cars virtually, and I’ve always wanted to bring that to the real world as well, so LTO was the start of that. We began back in 2018 with our first black E30, and that helped me to realise that, yes, this was something that’s possible to do – so let’s see what else I can do!” 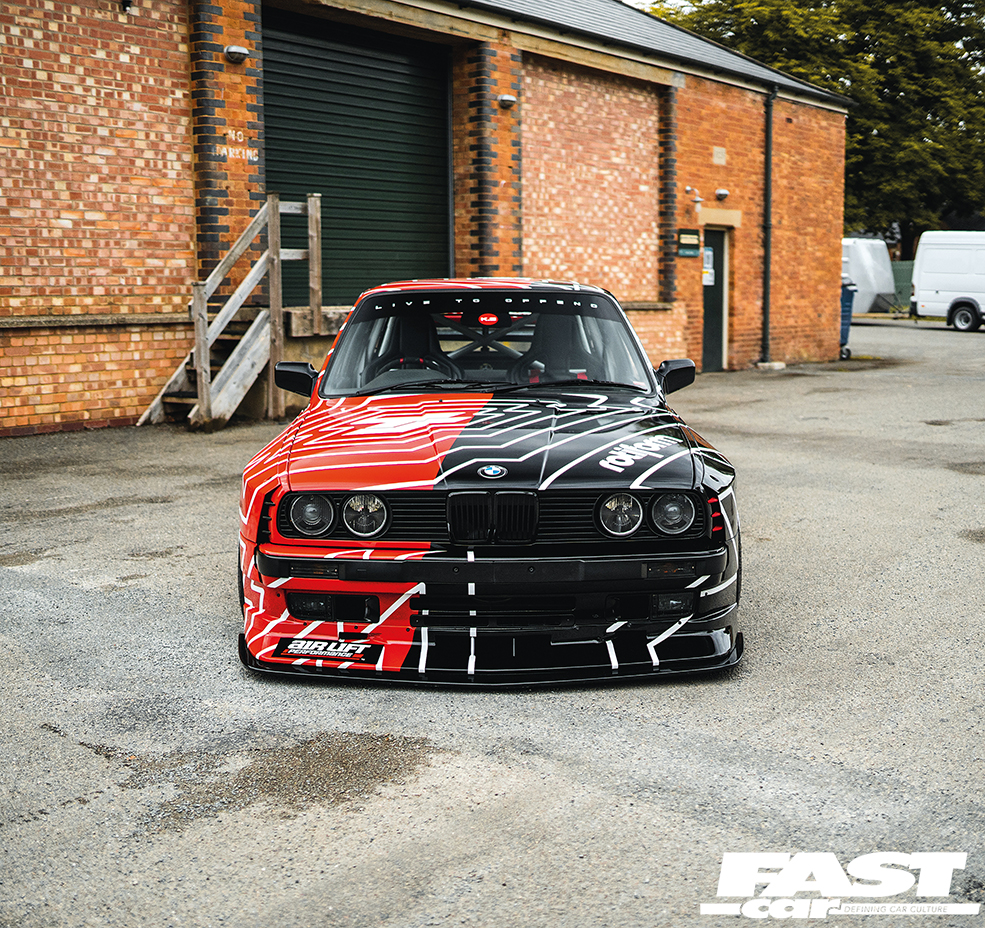 Those first tentative steps into widebody success certainly caused a stir at the SEMA show that year and developing an evolution of the kit for a British build made the process all the more special. “This build is our first one in the UK, which is extremely exciting for us,” he continues, “given that I live here and was born here, it’s nice to have an LTO car on my home turf as opposed to it being in the US, it makes a bit more real. Compared to the previous kits, this one is a lot wider, and things have been adjusted and perfected further from the early prototype version; the kit itself is race-inspired – it has a mixture of styling from the BMW E30 M3 and Group 5 racing cars. The tilting spoiler is reminiscent of the Group 5 era. Livery-wise I wanted to do something that reflected the racing side of things; Warsteiner and Jägermeister were iconic liveries, and one I’ve always been particularly fond of is the BASF on the M1 Procar – I thought it’d be quite fitting to do a little remix of that. It’s wild that’s for sure!”

Before we get too far ahead of ourselves, let’s hand the story over to Parm Panesar at The Tuning Store. A one-stop shop for car mods, this is an outfit very well suited to this sort of one-off custom, and Parm in particular was extraordinarily keen to get the ball rolling. 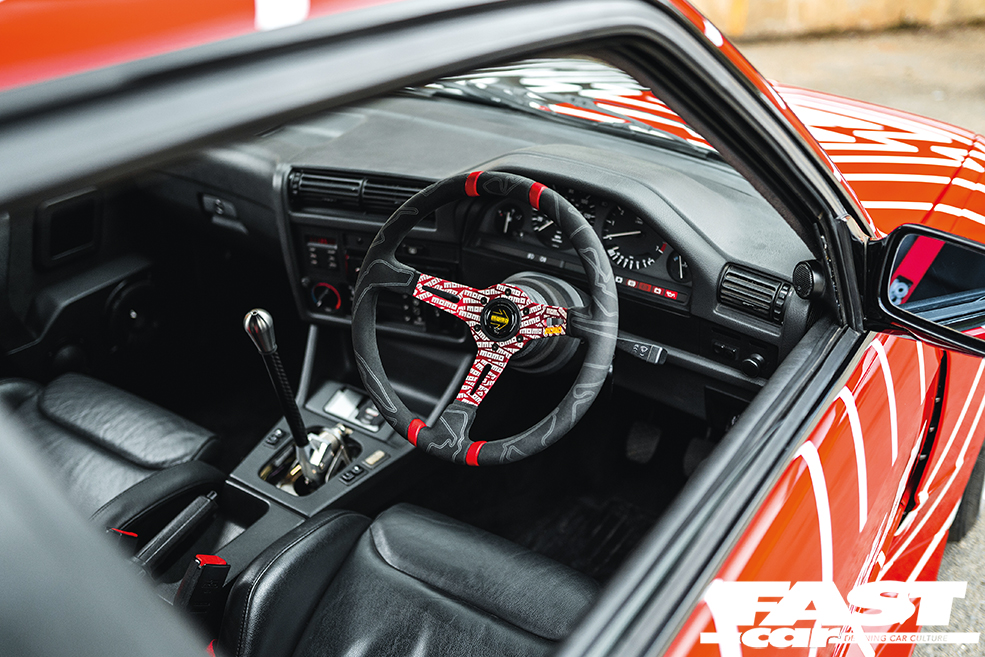 “Ever since I saw the first ever LTO widebody BMW E30 in Las Vegas at the SEMA show, I’d made up my mind: we would build the UK’s first LTO car,” he says. “The wide stance and aggressive looks of the ’90s Touring Car-inspired bodykit had me weak at the knees! So, a few months after the show I met up with Khyzyl, a plan was put in place, and the kit was placed on order. Now I just needed to find a car for the build.”

The donor BMW didn’t need to be anything particularly special; indeed, it was deemed best not to buy one that was too nice given that it was going to be chopped about, so the search began for an E30 two-door that was mechanically and structurally sound, without worrying too much about the aesthetics. By chance, a suitable car was found locally to The Tuning Store – a 1989 325i auto which was decent enough throughout and ripe for a makeover. A key selling point for Parm was that it came equipped with original factory air-con, which is something of a rare option, and he always likes his cars to have a bit of a story behind them. Of course, the most colourful and enthralling chapter of this E30’s story was just about to be written… 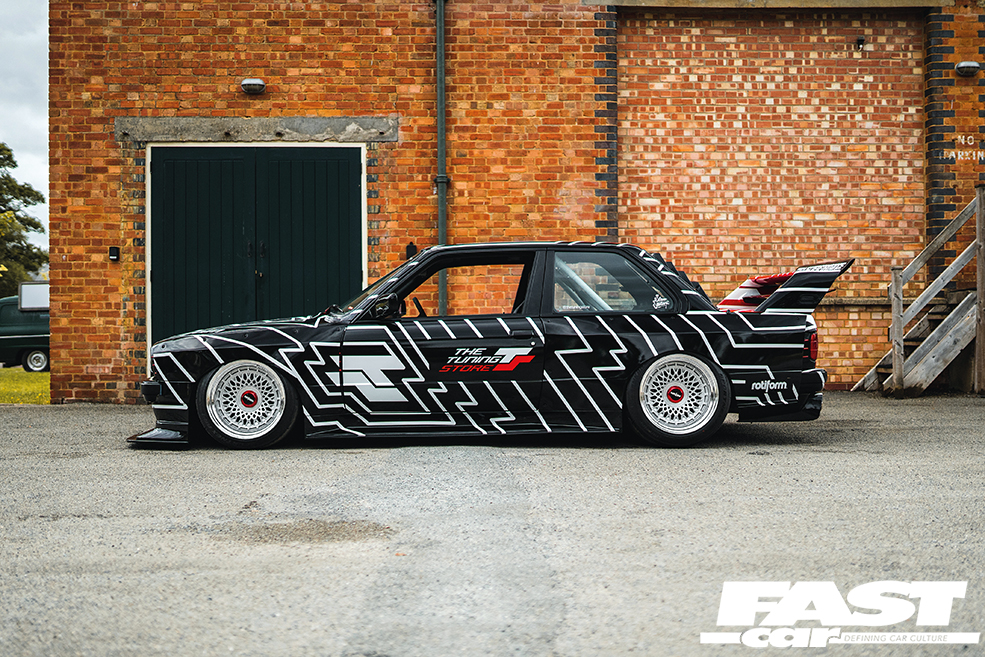 “A large benefit of the project was that it would serve to promote our new Performance Parts store, so it was important that we did as much as we could in-house,” Parm explains. “Aside from the pre-wrap prep, which was carried out by Dips at Custom Cars, and the wrap itself which was applied by Boss Dog Graphics (both of whom did an outstanding job), everything was done by our installers here at The Tuning Store. There were a few unprecedented delays, not least Brexit and Covid, but we’ve got the team and the skills to get it done right.”

Bodywork man Jay Tailor quite literally had his work cut out: “We really had to hack the car up to get the LTO kit on,” he laughs. “We cut the front wings to allow clearance for the wheels and the kit and cut the whole rear sides off to make room for the massive wide rims – it was all properly sealed up to keep the moisture out, and we made sure to retain the strength of the rear quarters. Both bumpers were cut and modified too, and we got the whole kit mocked up including the rear spoiler and diffuser, and inserted rivnuts everywhere so that the bodykit can come off again if needed.” 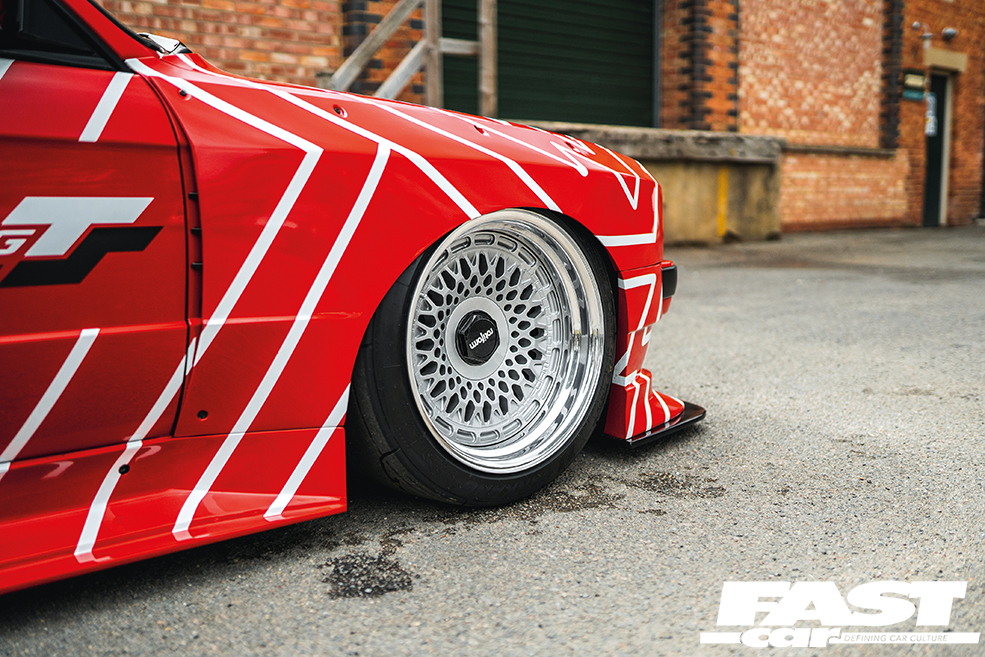 With the mock-up successful, the shell and separated kit were delivered to Dips – initially just to perfect any existing dents and dings to the body, but then the decision was made to get him to finish it all in smooth shiny black, a choice which would pay dividends when it came to wrapping.

“After the various delays and with the project properly on-track again, we set ourselves a deadline of the Players Classic to get it finished and ready to show,” says Parm. “And we did! The reaction was just overwhelming, it went mental. We must have broken the internet that weekend.” 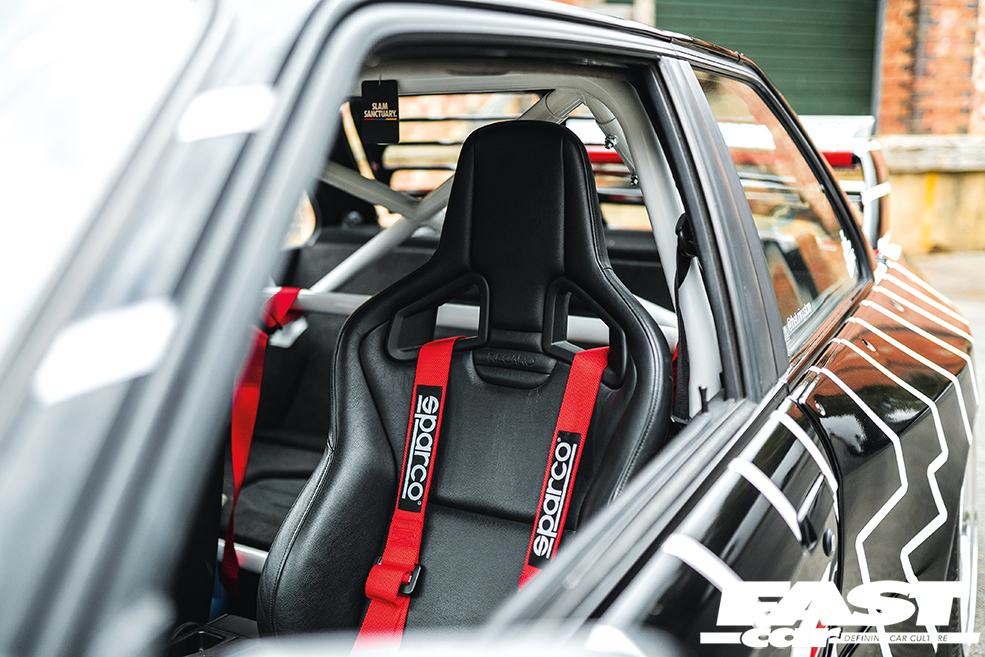 The level of detail throughout the car really is astonishing too – these guys work efficiently, and they never cut corners. Every element must be perfect. Check out the wheels, for example, a custom commission from Rotiform with staggered widths and oodles of girth, tailor-made to slide into those broad arches as the BMW airs out on its Air Lift hardware. The interior is a masterclass in form and function, with Recaro Sportster CS seats meeting a half-cage, carbon shifter (there’s now a manual transmission, thanks to @juste30z) and super-fresh Momo Ultra steering wheel. It’s built to cruise as well, with audio taken care of by Kenwood and Power Bass, and there’s a state-of-the-art Viper alarm on sentry duty. With all of this wrapped up in what is arguably 2021’s coolest bodykit, slathered in Khyzyl’s new-wave reinterpretation of those old-school race liveries, this is a hardcore widebody BMW E30 on maximum attack.

“We’ll be throwing in a whole load of power over the winter,” Parm assures us with a smile. “It’s currently running the stock 2.5-litre M20 with a custom exhaust, but we’ll be giving it a full engine upgrade, probably with a turbo, shooting for 400bhp with lots of bang-bang-pop-pop.” 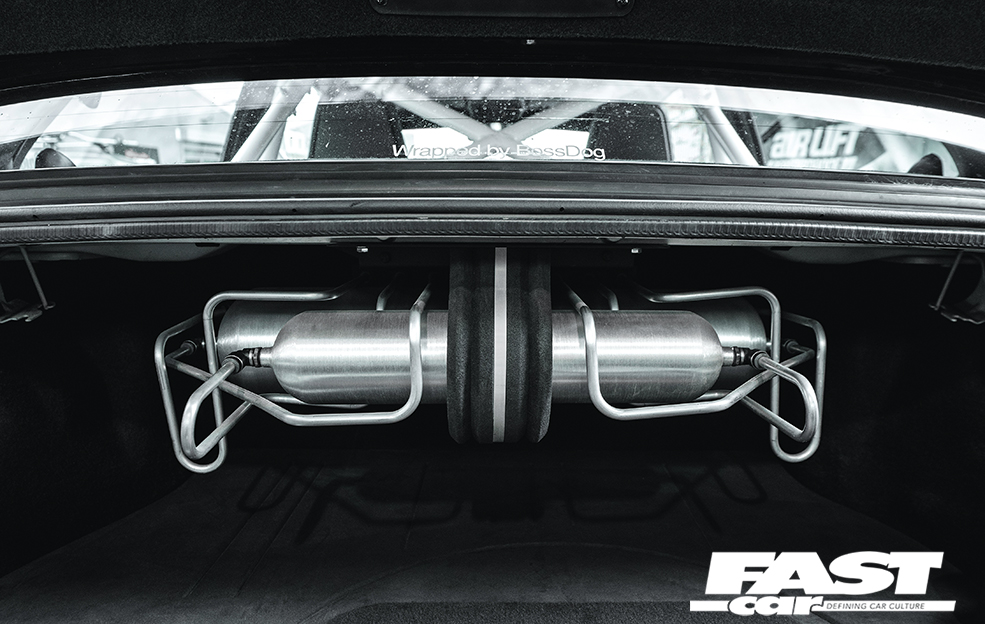 “It’s such an exciting project,” Khyzyl enthuses, evidently so very proud of how his visions have come to fruition. “There are a few other projects that aren’t BMWs in the pipeline too, one being the FD RX-7 kit – whether I’ll do that to my own car I’m not sure yet! We have some other cool projects that we’ll be thrilled to showcase next year too. Exciting times, it should be fun!”

And that, above all else, is why this LTO widebody BMW E30 exists. Fun to design, fun to develop, fun to build, and now fun to drive. The dreams of a restless and curious soul, developed by artisans into a magnificent reality.

Converted from auto to 5-speed manual by @juste30z