It’s the seventh deadly sin, pride. But the owner of this widebody BMW 7 Series is right to be proud of it, as it has been artfully reimagined with extreme prejudice…

We all want to drive something unique. It harks back to the sepia-tinted days of old-timey suburbia when everyone was keen to keep up with the Joneses by climbing the corporate ladder to blag a company car that would outdo the neighbours; if you had a GXL when they only had a GL, you’d won. And, inevitably, the automotive aftermarket grew into a global colossus to fulfil exactly this desire, to turn a mainstream production car into the car you want it to be. Whether your proclivities lie in having the fastest machine on the block, the most stylish, or whatever else takes your fancy, individuality is key. Whether your primary focus is on wheels or audio or interior retrims or bodywork addenda, or even a fusion of all these things and more, the key to it all is to ensure that when you pull up at the traffic lights, there’s no chance whatsoever of somebody coming alongside in an identical car.

This was very much the line of thinking pursued by Andrew (@munich.bruiser) in the creation of this astonishingly aggressive widebody BMW 7 Series. As the boss-man at ProTuning in Riga, Latvia, he certainly knows a thing or two about taking cool cars and making them cooler, and he squeezed every drop of nous and experience into crafting what is quite possibly the angriest G11 that the world has ever seen. He didn’t just want any old 7 Series – he wanted to take its inherent businessman-in-a-tracksuit vibe and amp it up to extreme levels. Which, as you can see, he’s achieved with some success. 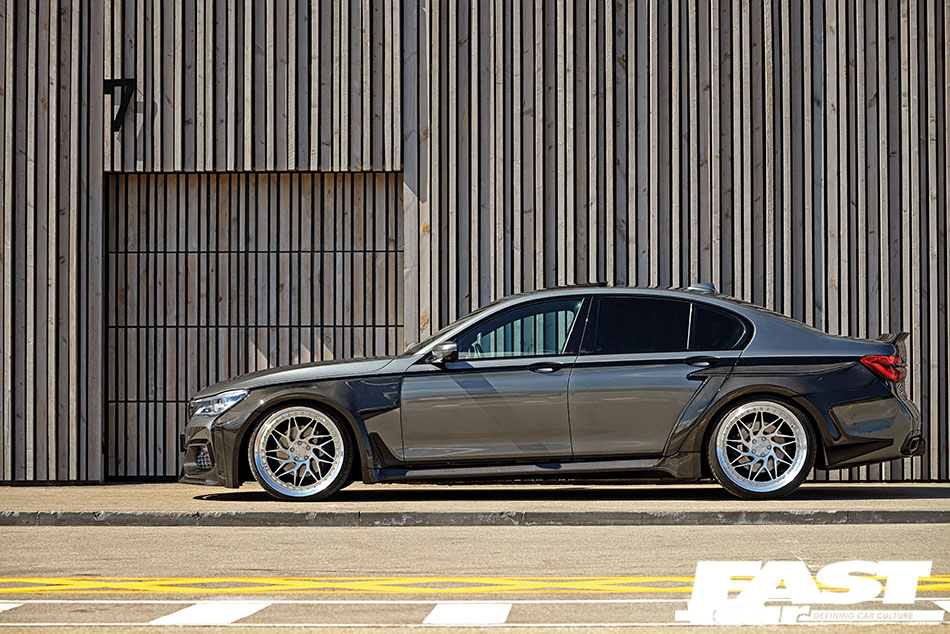 All of this stems from a lifelong enthusiasm for BMWs. Andrew’s first car was an E30 3 Series, and since then, he reckons that he’s owned every different version of the E30 possible, aside from the Baur. He even had an M3 that was swapped to run an S50B32, which was generally pretty excellent and earned itself a bunch of mag features. “I’ve been in love with BMWs from the very start,” he assures us. “It’s like a drug. I’ve had all sorts, including a turbocharged M20B30 stroker in an E30 Convertible… every car I’ve owned, I’ve done something special with.”

Special is the watchword, no doubt – but it’s quite a pivot to go from a bunch of E30 3 Series to a G11 7 Series, isn’t it? In the broad scheme of BMWs across the generations, these two models are pretty much at opposite ends of the scale. So what led Andrew to supersize? “Well, it’s a sports and luxury saloon,” he reasons, “and we all are grown-up kids – and still play with our toys. I wanted to have the best toy in the world, and I did it.” A friend of his had owned this 2016-model xDrive 740d from new, and by the middle of 2019, he was looking to sell. At this point, it had 58,000km on the clock and seemed to be an extremely good deal, so Andrew threw some cash his way, and the cogs in his brain started turning. 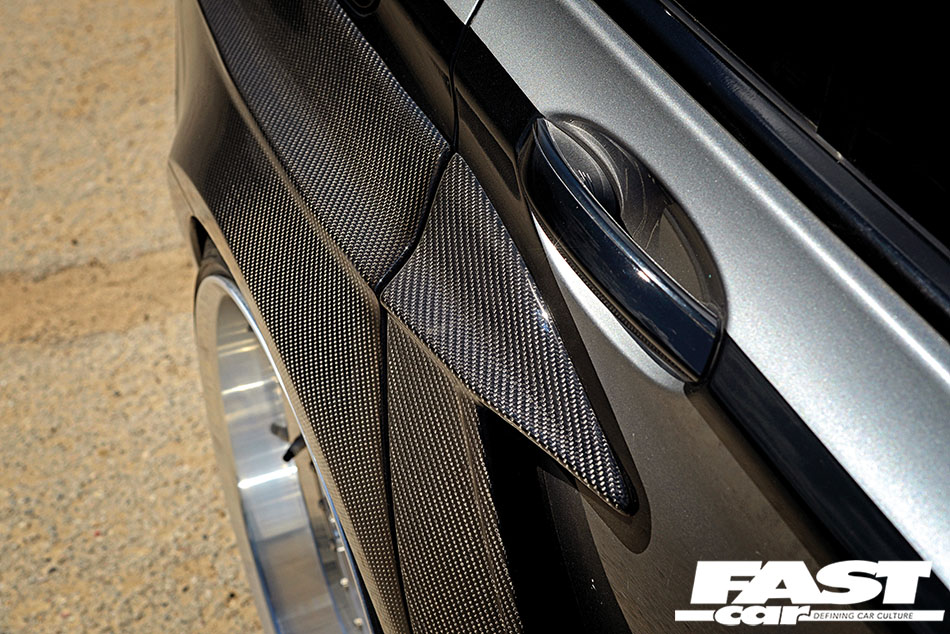 “The car was in mint condition, and fully loaded,” he recalls. “Naturally, the first thing I did was to start imagining things I could change. I’d been thinking about creating a wide-body kit for the G11 for a while; in fact, I started drawing up my first sketches back in 2018 – that’s when I’d first realised I wanted to create such a wild project. With the car in my possession, I attempted the first moulds in late 2019, with production of the full body kit happening through 2020 and the final fitment taking place in 2021.”

The 3D renderings were deftly brought to life by the talented team at ProTuning, with every individual piece of the body kit being pre-preg carbon fibre. The front overfenders add an extra 60mm of width per side (and remember, this was a pretty wide car in the first place), with the complex rear quarter panels expanding girth by a full-fat 80mm. There are a great many other pieces to the kit too, including the front splitter and front bumper winglets, side skirts, rear door air scoops, rear bumper side vents, ducktail, and rear diffuser – all with the carbon weave proudly on display. They could have colour-coded it all to the factory paint, but then, how would anybody know how much complexity went into the craftsmanship? This is no easy-mould plastic, this is artisanal autoclaving. “I think the rear quarters are my favourite part of the widebody BMW 7 Series,” Andrew says. “They’re such a complex shape, very intricate modular parts, it took a lot of effort to achieve.” 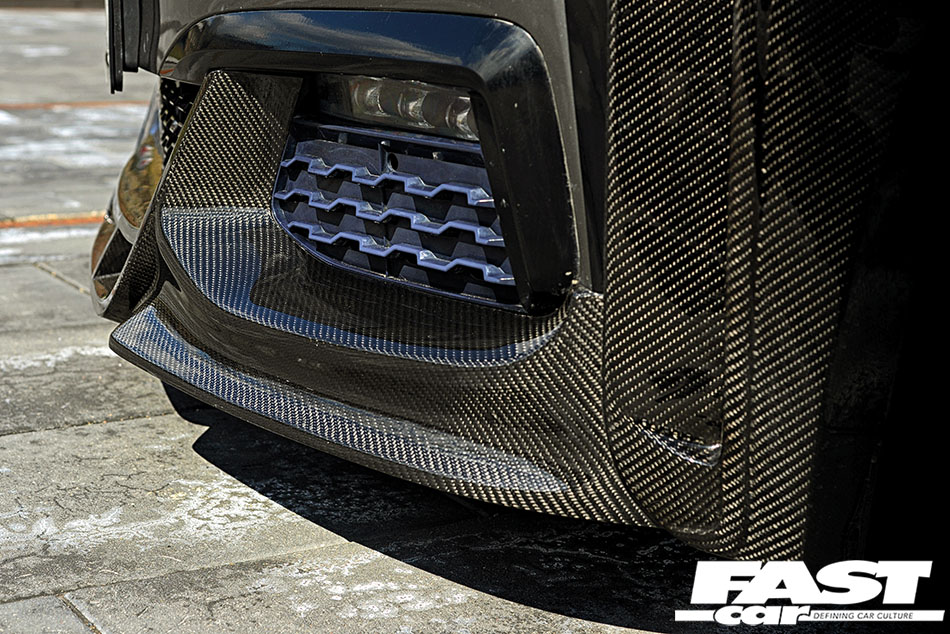 In order to get the widebody BMW 7 Series sitting where they wanted it to, air ride suspension was the only answer – and, helpfully, the G11 7 Series came with this fitted from the factory! Although the basic architecture of an OEM air suspension system has a rather different focus to an aftermarket setup, the ProTuning guys had some work to do to reconfigure it for badass lows. The bags have been modified, and the management system has been reprogrammed to offer two drop modes – 40mm all-around for highway cruising or ‘stance mode’ where the wheels touch the arches for showground hard-parking. This has all been done sympathetically to ensure that it operates in the correct OEM style while also offering the new-found lowness, which involved some necessary modifications to make sure that everything works properly. And with the BMW 740d sitting aggressively in the weeds and having such massive arches, Andrew had to think hard about what manner of wheels would be appropriate to fill them.

“The rims were the most expensive part of the project,” he laughs. “It was my dream to have the wheels with correctly aligned throwing stars, and I’ve made it real using the help of Z-Performance.” This premium wheel manufacturer worked with ProTuning to craft a set of their ZP.Forged 12 design to the exact specs required to sit perfectly in the carbon arches. The fronts measure 11×22” with an offset of ET-5, while the rears are a seam-busting 13×22” ET0 – and if you check out the sidewalls, that’s a supercar-esque 335-section tyre on the back axle. Pretty crazy stuff. And yes, look at either side of the car, and you’ll spot that the wheels are indeed directional. 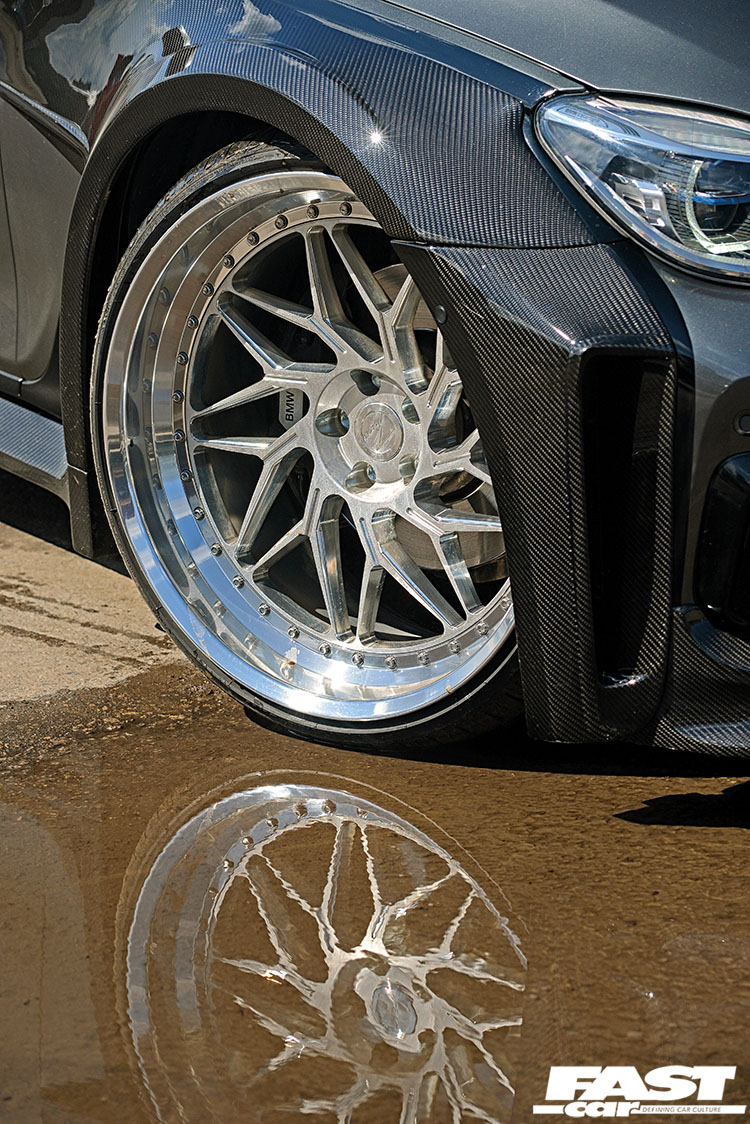 “The tyre size presented one of the biggest challenges of the build,” he continues. “Those BMW engineers did a few uncompromising innovations to the body of the car, and that’s why we’ve faced the issue with front wheels and tyres.” All came good in the end, though – and it’s important to note that it wasn’t just a case of getting the rolling stock to fit but making everything actually work. The engine and transmission have both been remapped to optimise performance (for the motor, that map plus upgraded downpipes equates to around 400hp), and the eagle-eyed will have spotted that this is an xDrive model wearing staggered fitment wheels. When you’re talking all-wheel-drive, it’s generally optimal to run a square setup to stop the drivetrain chewing itself to pieces, so this required some careful bespoke mapping to get the G11 happy and safe to run with this wheel configuration. It’s not just a bonkers widebody kit, there’s a whole lot of intelligent engineering too.

There’s a certain tangible brutality to the modern-era BMW 7 Series overall, be they owned by the Mafia, the Yakuza, an East-end crimelord, or the fellas running operations in South Central LA: these motors are imposingly big, low, sleek, shark-like in their menace. They pull off the neat trick of being simultaneously stealthy, with their dark-hued colour schemes and impenetrable glazing, and ostentatiously showy; a demonstration of wealth and status. Because that’s what being gangsta is all about. With all the high-end and high-tech chicanery that’s gone into this eminently eye-catching G11, it’s probably best not to talk about the bills… but then, this has been about more than money to Andrew. He said it himself, he wanted to build ‘the best toy in the world’. And this outlandish creation certainly is unique. “The whole car stands out from the norm,” he smiles. “The 7 Series with a wide body? Nobody’s done that for the last 30 years.” He could well be right there. And one thing’s for sure: he’s definitely not going to pull up to the traffic lights alongside another one. 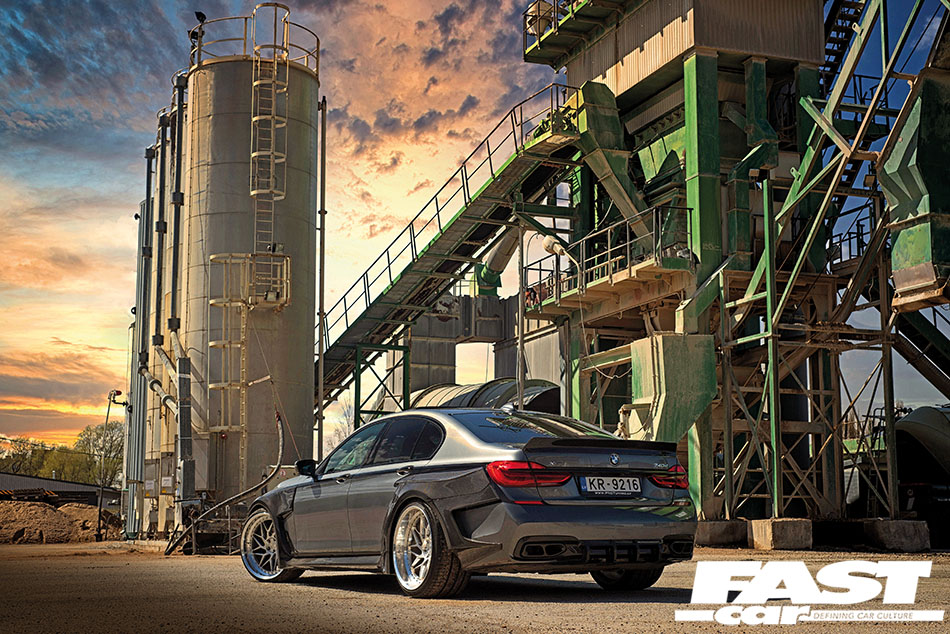