They do things a little differently in South Africa when it comes to motor racing as we check out the rear-wheel drive Mk8 VW Golf GTI GTC.

Whatever Volkswagen turned its hand to in motorsport for the past decade has all been about taking winning very seriously. From the Polo in WRC to World Rallycross to the Pikes Peak and Nürburgring record-breaking ID.R, they’ve blazed a trail and left everyone else to pick up the scraps. Over in South Africa, that theme paused unsurprisingly at the end of the 2019 season – with Jettas winning their Touring Car Championship.

Next step and top marks then to whichever super-creative designer came up with this successor Mk8 Golf GTI because it looks stunning. A fraction of readers will know that this car was unveiled in 2020 and yet it’s still absolutely fresh. Blending corporate grille-inspired honeycomb livery with blue-hues harking back to the VW Motorsport Mk2 Golf past, round arch extensions, the body-coloured profiled chin spoiler and its curves to run the eye, obligatory big ‘G’ wing – we can’t print that word anymore – and the massive screen-strip telling everyone loud and clear that this is a manufacturer-endorsed corporate chariot coming in hot. What a result. Moody, multi-coloured, simmering with mods, pummelling the mind with the message that what lies beneath is only ever going to be serious. With its heavy outward protein bulk up, it looks fast standing still, and even better on the move. 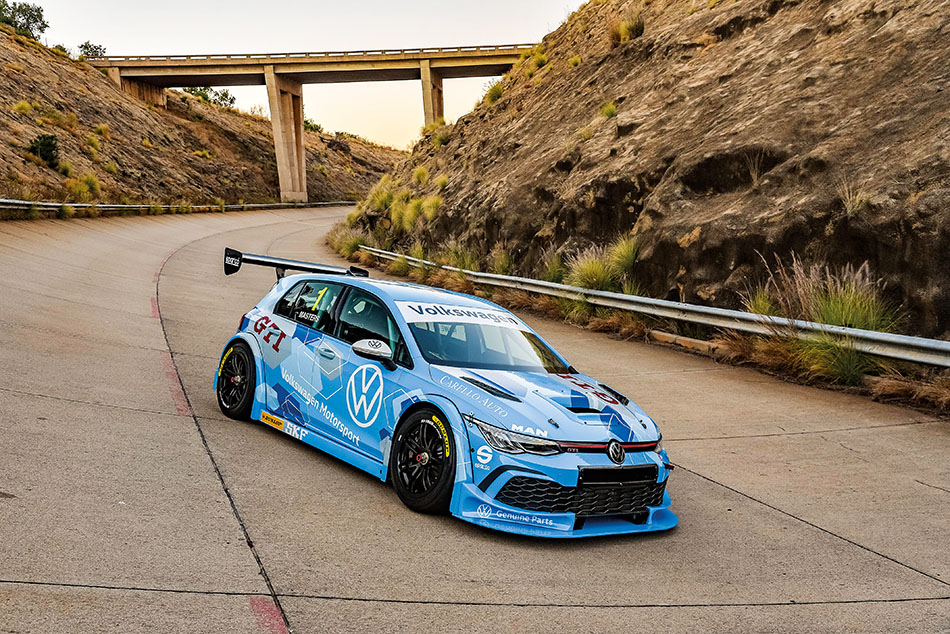 They do things differently at Volkswagen Motorsport South Africa (VWM SA). The Uitenhage/Kariega -based operation in the Eastern Cape has always run both Audis and VWs over the years, sometimes markedly different from the Northern Hemisphere norm, borne as ever out of motorsport regulations, interwoven with alternate marketing slants. Fun facts: where was the first five-stud Mk2 Golf created? No, it wasn’t your jammy mate striking lucky in the ‘90s at the breakers with an early-doors VR6! It was the VWM SA front-wheel drive rally Golf running Ur Audi quattro Fuchs wheels, complete with larger front CV joints. Ever heard of the four-wheel drive rally Golf that wasn’t a Rallye? A round-arched 16-valve Mk2 with rod-change syncro transmission running on ITBs? Yep, the deeper you dive, the more off-beat it gets. Meanwhile VWM SA has run a one make Polo Cup series for a quarter of a century. Who knew?

Those in the Europe-USA Northern Hemisphere scarcely get to hear about all this – it seems like the rest of the world has no idea what VWM SA gets up to. So if that sets the scene for some truly sideways glance motoring, settle in because here for our Mk8 Golf special issue, all is not what it seems. 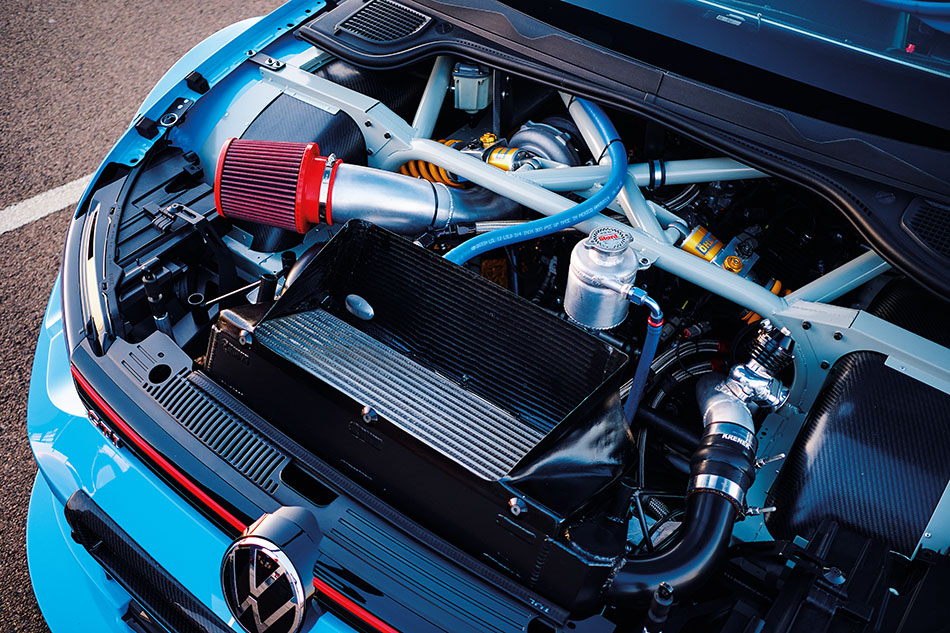 Tin top Touring Car racing around the world never gets old or fails to put a smile on. VWM SA participated in the premier domestic Global Touring Cars (GTC) series for four recent seasons with its Jetta model, cleaning up drivers and manufacturing championships in 2019, against opposition from BMW, Audi and Toyota. At the end of 2019, the Jetta in South Africa – road and race – was pensioned off (see box out story), just as the Mk8 Golf was being launched in Germany. No more marketing needed for the Jetta; time to reshuffle the pack.

So, a new car was needed and grand plans were laid for a 2020 GTC title defence push with this slipperier and compact Mk8 VW Golf GTI GTC. With the Golf 8 not due to go on sale in South Africa until Autumn 2021, this World-first Golf Mk8 race car would get nearly two seasons’ of racing lead up on the local market, only – quite obviously – for an interception from the East to put internal combustion engine racing on ice. 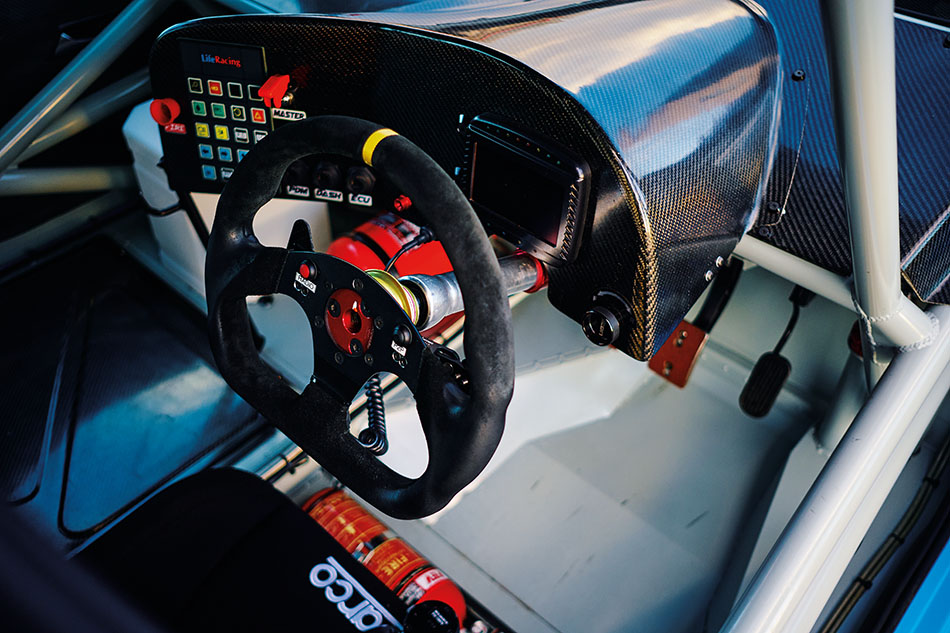 So, the Golf you see here, an evolution of the 2019 championship-winning Jetta GTC, had a difficult birth and instead of the planned March 2020 in-person reveal, the delayed ‘just now’ virtual reveal came in July 2020. To the initiated the true clues of this 500 brake horse power 2.0-litre turbocharged touring car started to surface. What looks like an updated Hannover Golf Mk7 TCR racer couldn’t be further from reality. Under the skin, of course it has the Golf GTI EA888 engine in it, but the start-point in hunting for it is under the windscreen wipers, where it sits longitudinally with a Garrett GTX3071R Gen II turbo hanging off the side. This looker of a Golf is front /mid-engined, and blows its gases out of the nearside sill. Dry sumped with Carillo rods and pistons, yet standard cams, it’s labelled a ‘production’ spec engine and yet for any road driver, dry sump aside, that’s routine, relatable tuning, as is the Fluidamper on the production crank minus oil pump drive, plus throwing the balancer shafts system bin-ward. Less street relevant is the 110 octane fuel or the radiator micro water spray system – and from the bell housing backwards, put down the pens and forget it. It uses pure racing parts to GTC regulations to send the power to the rear wheels via an Australia-built Albins six-speed sequential transaxle gearbox with paddle shift. Alternator, starter motor, flywheel and clutch are all mounted at the rear axle for weight distribution!

In fairness this is the same across the grid. While Touring Car racing around the World has gone in different directions, whichever the route, the ringmasters have never been able to re-attain the peak black-hole Super Touring spend of twenty years ago. Instead organisers have pursued simplification to get cars on grids. This sees a common chassis concept, running gear, a single Life Racing ECU type, control tyres, suspension and other components. The GTC Championship organisers took up the challenge to create a ‘revival in South African circuit racing’. So far so good.

With the bulkhead moved backwards due to the mid/front-engine position, the driver is set back past the B-pillar – right hand drive of course – glancing at a completely bespoke carbon partial wrap-round dashboard and OMP Superquadro flat bottomed quick-release suede steering wheel complete with pit to car radio switches. Behind that a Life Racing D5 dash panel which includes data acquisition and gives the driver the vital engine info, with a Life Racing keypad power distribution unit console off to the left. A treble roll cage door bar brings a different approach to safety from the FIA / European and Stateside norms, whilst a Tilton pedal box assembly sits not floor mounted, but old school, up behind the dash. 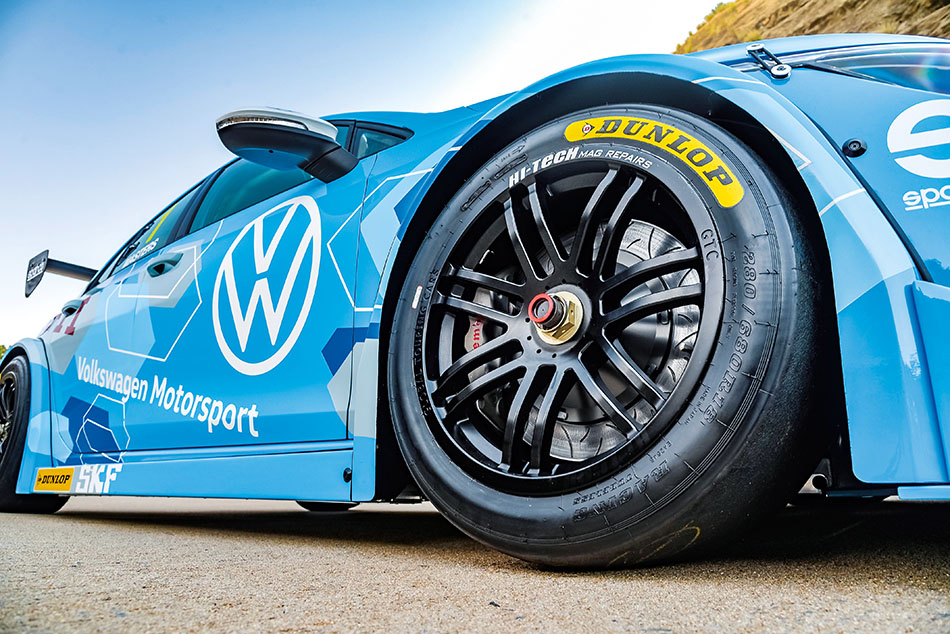 Speed to get parts on and off racing cars is of course central to the whole sport as far as the guys in the garage are concerned and in a cap doff to more streetable habits, a PWJDM universal bumper quick release kit sits on each corner.

And then of course is that big wing. Its size and shape is defined, placed in a position defined by the organisers relative to the body of the Golf. Aluminium stays and spherical joints triangulate it to stop it moving laterally whilst staying as light as possible. Bonnet vents, skirts and the widened wheel arches finish off the moody music. Large meshing in the lower bumper mean boundary layers and so most of the big gulps are taken through the mid bumper carbon tract and exit through the main central bonnet duct. 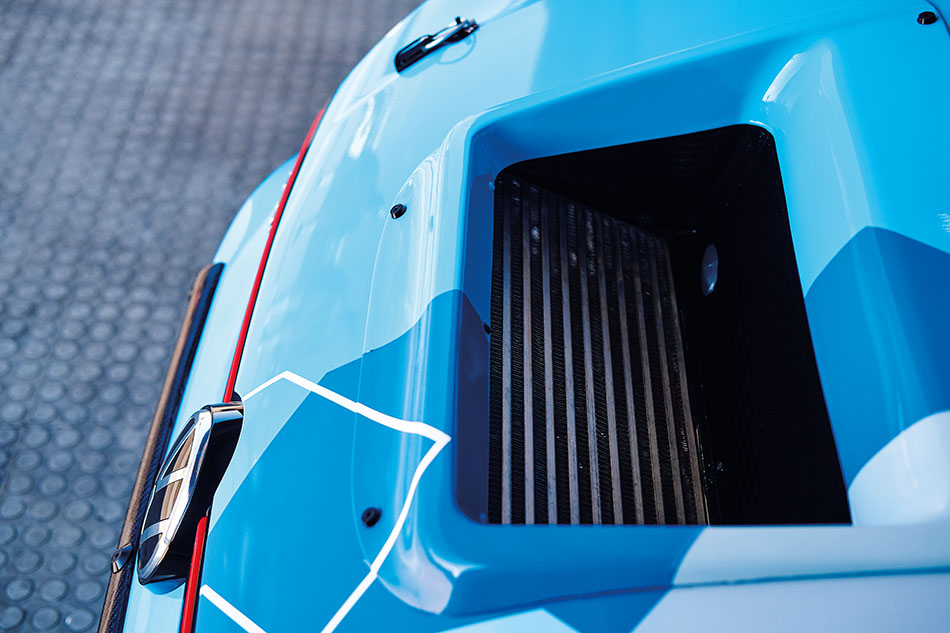 So with that fast food tech download (see tech spec below), it’s not hard to see that this Mk8 VW Golf GTI GTC will remain in a class of very few, because it’s going to be pretty tough going, trying to replicate this number! So for the Golf 8 road car tuners and owners out there, engine mods aside, this Factory racer is a bit of toughie as far as cross-pollinating modifying ideas goes, not that getting 500 bhp out of a four – or five – cylinder is news to anyone in the modifying scene. Everyone has a mate or knows of someone with a big-turbo 16-valve, 20vT or TFSI pumping out these sort of figures. But rest assured no matter how much lighter or track-prepped your mate’s car may be, any theoretical side by side – they use rolling starts in GTC – would be no contest. With that sequential racing gearbox ratioed for Vmax as quickly as possible, flat shift, a finely tuned limited slip diff, plus top-notch suspension, epic weight distribution and 280mm width tyres, it’s not hard to see why.

As the clock ticked us through the Pandemic, cheeky test sessions aside, the Golfs waited in the workshop until August 2020 to start for a truncated season run largely behind closed doors, starting with a non-GTC series test outing in the South African Endurance Series at the Aldo Scribante racetrack in Port Elizabeth. GTC battle proper finally commenced properly at the end of September at Redstar Raceway in Delmas and with a dream start: VW factory drivers Daniel Rowe took a win-from-pole with Keagan Masters making it a one-two for Volkswagen Motorsport! Liveries don’t win races but they look great when they do. By the end of the meeting, Keagan took another win and the omens were good when the pair did the same in October back at Aldo Scribante. Two races proved VW had made a step forward with this nimbler chassis, but that was no ‘season’– to be filed under ‘unfinished business’ – and what’s more, VWM SA elected to sit out the 2021 GTC, contesting alternate high profile events instead, including the ever popular Knysna Simola Hillclimb and selected endurance events. 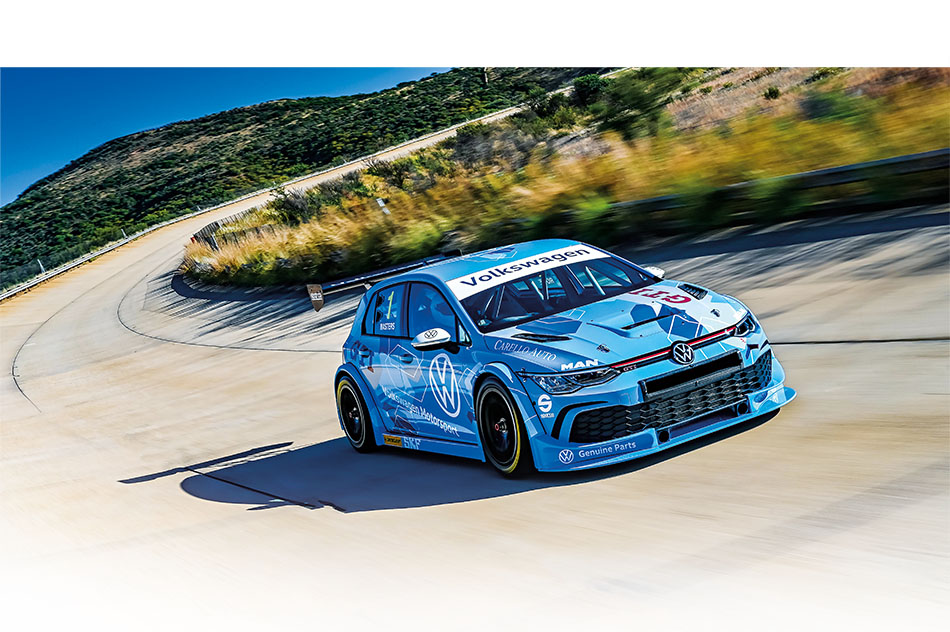 For 2022 though the Golf 8 will be back in action in GTC, aiming to bring the championship back to Volkswagen, with existing driver Daniel Rowe joined this time by former online gamer and Volkswagen Academy driver Jonathan Mogotsi, who steps up to the 500 bhp plate from a second-place 2021 finish in the same-grid GTC SupaCup supporting series front-wheel drive VW Polo. The Golf will contest the championship over seven rounds at five circuits from March through to October. Mike Rowe, Head of Volkswagen Motorsport South Africa is looking forward to this one: “Before the pandemic curtailed the 2020 season, we were leading the championship with Daniel Rowe, so I’m thrilled that we can continue where we left off”.

The side story though is no talk of hybrid power trains in this series. Petrol is the way forward in SA, at least for now. Save the image. Bottle the fumes. 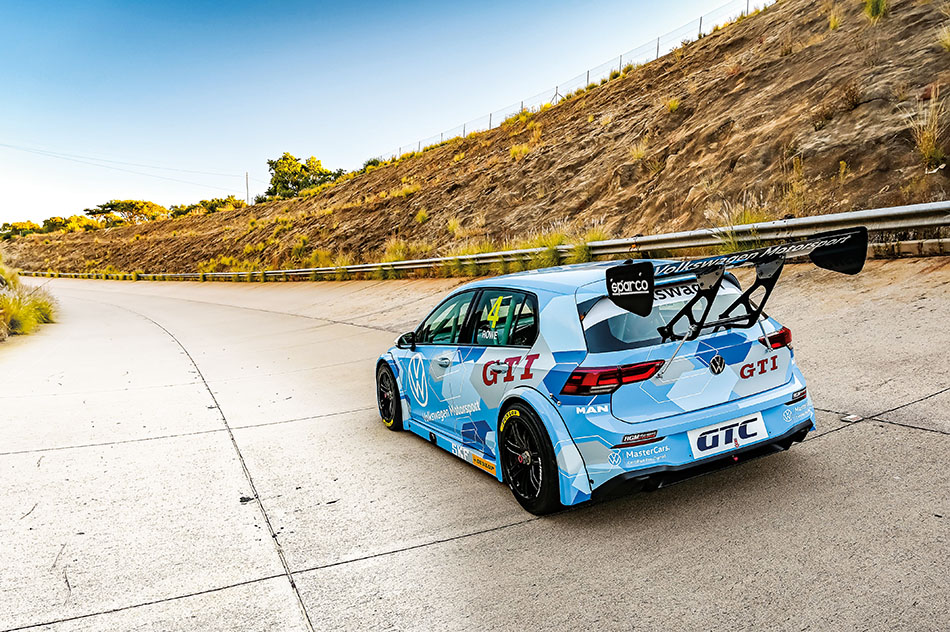