New school builds are just air bags and wheels, right? Well, this Toffee Brown example, with an EA888 engine from a Golf R, is one of the most complete VW Caddy builds we’ve seen in years. There’s certainly plenty of details for the naysayers to chew over…

When this issue hit the shelves, it was that time of year again for many where the festive tins of sweets are open and the habitual fortnight of grazing is well underway. Funny with Quality Street how certain chocolatey treats are first to be devoured. In our house, there’s always a race for the strawberry creams and the fudge. By early January, as the decorations come down and the self-loathing inspired new year’s resolutions are made, it’s the poor old toffee pennies that are left skulking in that otherwise empty vessel. Similarly, Chris Lister, the 42-year-old Lake District-based Mechanical Engineer and owner of this Caddy explained that when he viewed the van back in November 2018 despite the low mileage and immaculate condition, he was the first to see it and it had been languishing in the classifieds for a good while. It seems that the autumnal hue wasn’t popular with those wanting a small commercial.

As soon as Chris could pass his test, he was out there modifying cars. Even his automotive starting point, an Austin Mini 1000 was 1275 swapped. Chris explained that he was a BMW technician for 11 years, the early period of which piqued his interest in German metal in general. A part exchange MK2 Golf GTI 16V that came into the dealership was irresistible for the then 18-year-old petrolhead. This was adorned with the oh so nineties combination of big bumpers, alloys, springs, Hella blue lights and ICE. The dub disease had started but crippling running costs for such a young gun saw Chris swap over to a Nova GTE for a period. Various performance cars of the time that are now considered modern classics passed through the Lister stable including an E36 M3 Evo and a Honda Civic Type R. Chris’ current eclectic collection includes a modified Rover Mini Cooper Sport. the 2014 Caddy on these pages and a Honda VTR1000 SP1 for kicks of a two-wheel variety. 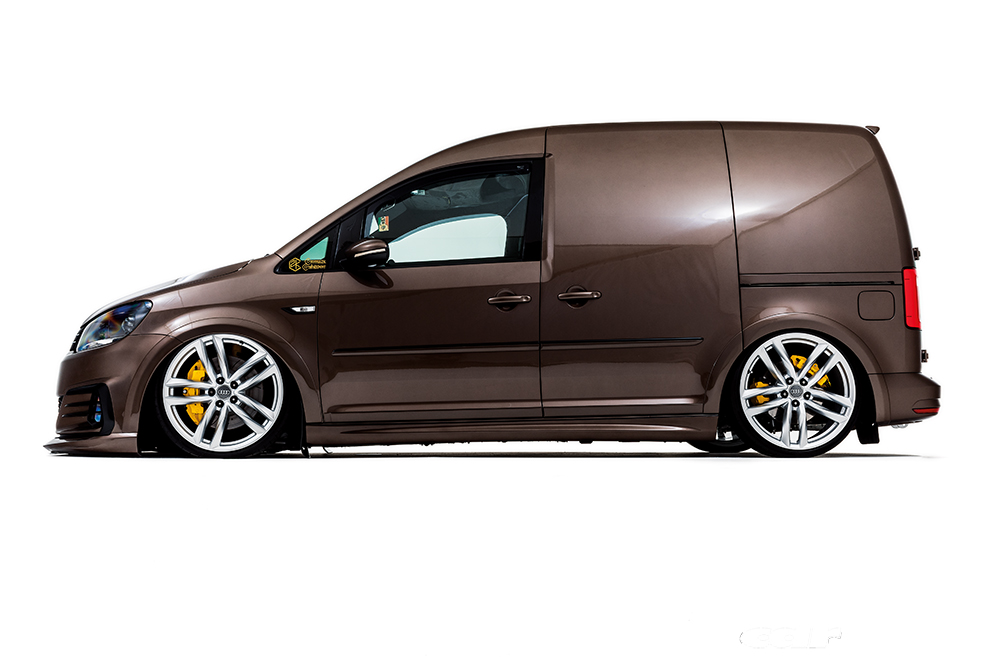 The EA888 VW Caddy story actually starts with a different example, a 1.6 TDI in white that was the big project prior to this one and was originally destined to be sprayed in Toffee Brown once the build was complete. Chris brings us up to speed: “The white Caddy build was well underway and featured some nice touches including MK5 Golf GTI front seats and MeisterR front coilovers. I then started to carry out the MK7 Golf R engine conversion but due to the platform difference’s I had an issue where I couldn’t get the ABS and steering modules to code, and therefore the dash was lit up like a Christmas tree. As a result, I drafted in the services of a so-called specialist. This was the first and last time I’d let someone else work on my vehicle. On getting the van home and continuing to work to resolve the ABS issues, I soon discovered the work to be a far cry from my expectations. Subsequently, I was forced to take the van off the road until I could solve the ABS issues and fully rewire the conversion. I needed a daily whilst work continued on the white Caddy and when I saw the Toffee Brown car on Autotrader I just had to have it. A trip to Yorkshire sealed the deal in November 2018 and the fun began. The initial intention was to just swap all the modifications over to the brown Caddy with the exception of the engine conversion.

Chris wasted no time and initially focussed on the interior of the new build. Recaro Wingbacks and Touran rear bench were the chosen pews. These were reupholstered in Nappa leather and GTD tartan along with the door cards and upper dash by Optimus Automotive. A MK7 Golf GTI steering wheel recovered in perforated leather and suede is an in-keeping tiller whilst Touran carpets and centre console add luxury to the once spartan cockpit. 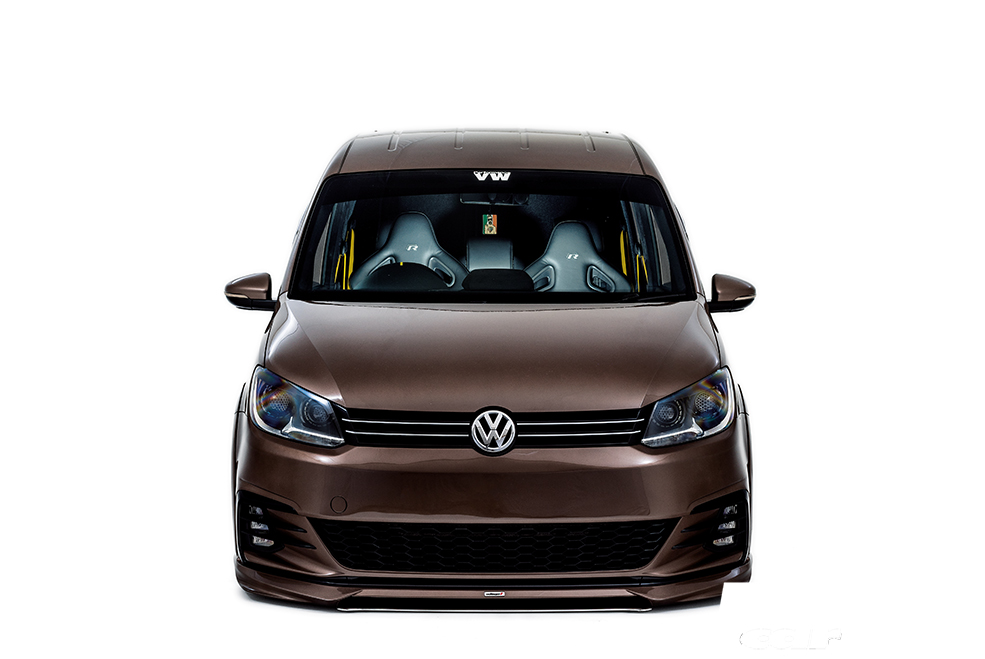 The modernised, factoryesque theme continues to the exterior of the car and the subtle style belies the amount of work that has been undertaken. Mk4 Caddy rear lights and bumper join a rear spoiler that quietly hints at the sporting capabilities of the build. A hybrid Mk7.5 Golf GTI/Caddy front bumper is fitted up front along with an Oettinger spoiler and splitter. Custom Touran/Caddy wing mirrors and Edition 35 style side skirts are clever enhancements to the side profile. All additions were expertly colour coded KJ Bodyworks.

It’s a job to know how Chris has found time to sleep in recent years as alongside perfecting the brown Caddy’s build he was slowly chipping away at the engine conversion on the white van. “At the point I’d finally perfected it, my wife suggested transferring it to the Toffee one. She is very understanding!” The engine used for the conversion is a 3rd generation EA888 (CJX engine code) removed from a 6000 mile Mk7 Golf R. This is coupled to an SQZ code gearbox from a Scirocco with a Forge Motorsport quick shift via an RTS twin-plate clutch. A lot of the issues were of an electronic nature. I’d been working on resolving ABS issues with the Golf R converted White Caddy and with the help of Nikki Dawson from Twinsport and Doc from the Caddy 2k forum, the issues were finally resolved in September 2020, a full 29 months after first starting. I couldn’t tell you the number of times I’d rewired the white van or the number of different ECU’s it had, but we got there in the end and now have a fully working EA888 gen 3 CJX engine conversion with zero fault codes and no DTCs deleted/removed from the ECU”. A carefully orchestrated selection of tuning parts was ordered up including an APR Carbon intake, Powervalve 100 cell cat, Darkside Developments intercooler, Creation Motorsport hard pipe kit, a Litt Co L380X turbo with Funk motorsport turbo blanket, RamAir Muffler delete and Turbo elbow, custom CSK Stainless steel exhaust and a hybrid Caddy/TTRS low-pressure fuel pump. Tuning was carried out by Uber Tuning UK, it made 417.5bhp and 545Nm, at 28 degrees and on low octane fuel. 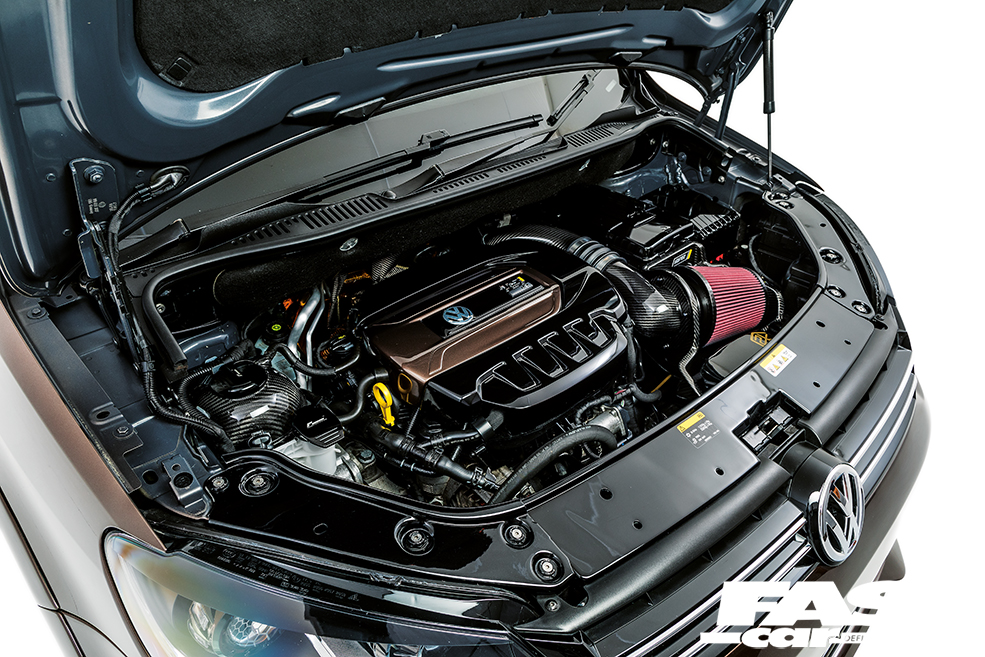 An ABP air ride system is fitted that utilises Bilstein front struts and their in-house bags. The rear features a split-leaf system and, again, uses Bilstein shocks. This hardware is managed by a Grinds G1 system. Whilst the van looks purposefully low when aired out or cruising, retention of factory arch liners to protect the longevity of the daily driven van means that it does not lay frame like some builds we have seen as the decision for air on this Caddy was made as a compromise between looks and practicality. The execution of the system is in keeping with the high-end finish of the rest of the build and the tank, dual compressors, water traps and check valves are all installed under the rear of the van, on a custom mounting plate and enclosure. Genuine 20” Audi A6 wheels provide the OEM+ icing on the cake to the chassis modifications. 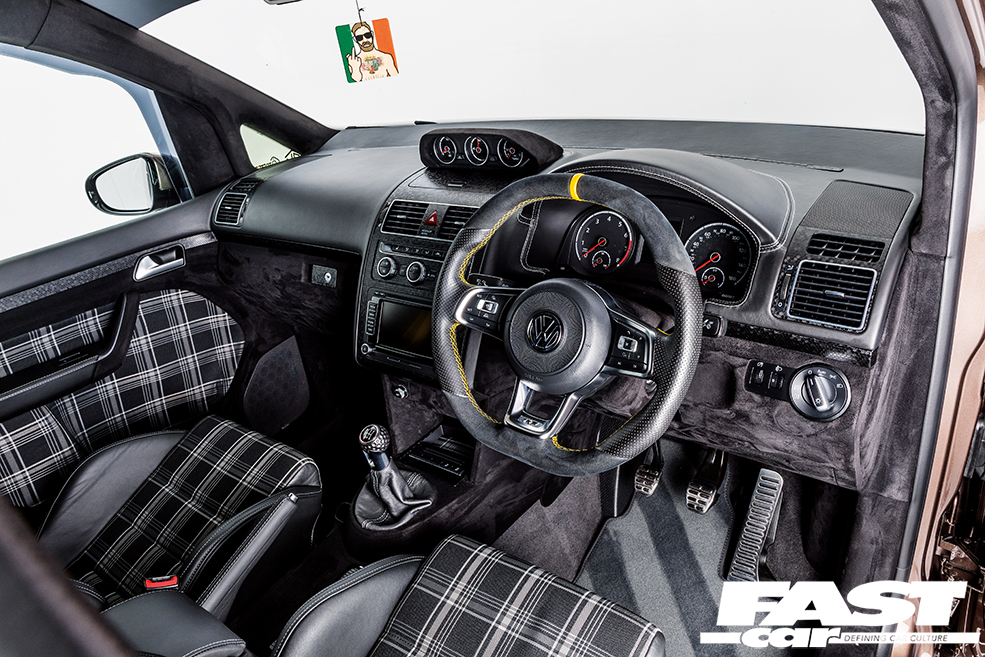 The EA888 VW Caddy was largely built in a tent at the top of Chris’ father’s driveway. Chris was keen to point out his Dad, Keith got stuck in despite the cold conditions and being in his eighties and was a huge help. The car is largely finished now but Keith has a couple of small touches he is considering including the fitting of a Caddy Alltrack rear bumper but he just wants to continue enjoying using it daily, transporting his spaniels and bikes to the fells. The Caddy has a dual life as a show car and the reception has been extremely warm with silverware in the trophy cabinet already from Cumbria VAG, Tatton Park, Kultureshock and Cleanfest. There can’t be many dog cars that can claim that!

Has it been worth the headaches and the heartache? “It’s currently one of only two properly executed (not just loom swapped) Caddy EA888 gen 3 conversions in the world. The other belongs to my friend, Doc. This makes me feel very proud. Also, it’s a hell of a lot of fun to drive and really surprises a lot of people. The noises, the acceleration, how involved it is… it just makes you smile”. We’re certainly glad Chris got his teeth into it. 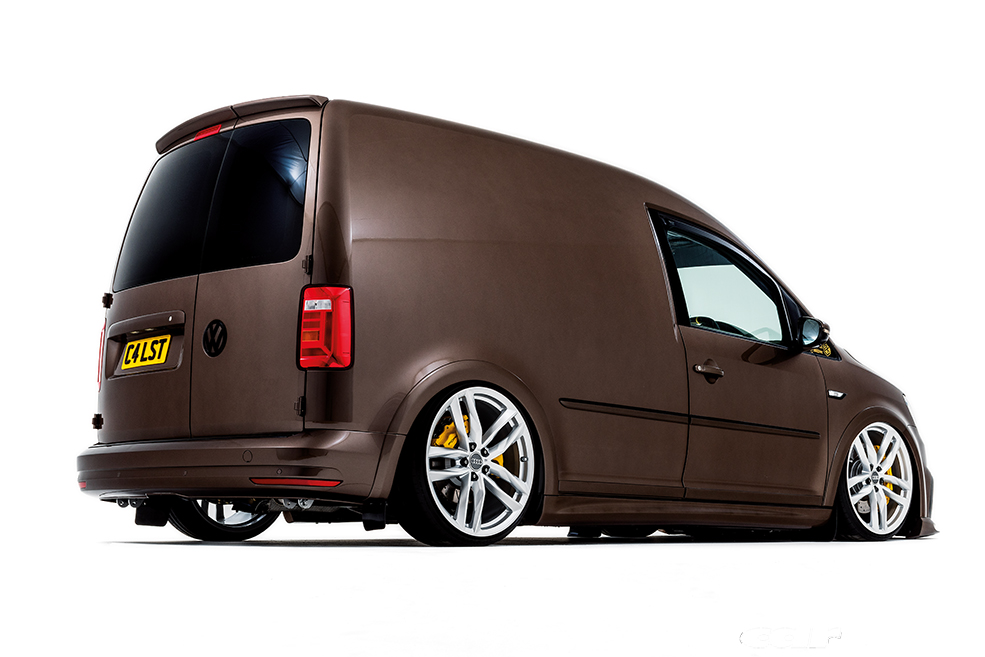