The VW Beetle may have its roots in the 1930s, but Matt Dennett’s homegrown hellraiser packs 21st century tech thanks to a 505whp RB25 engine.

There are a number of things we know about VW Beetles which have been comprehensively torn up and thrown away here. They have air-cooled flat-fours, right? This one doesn’t. The performance can be best described as ‘relaxed’? Nope, not here. The engine’s mounted in the back? Take that received wisdom home, sunshine, because things are about to get rowdy.

What you’re looking at here is technically a classic Beetle, but it’s only a complete entity in the sense that Dr Frankenstein’s monster was. Peel back the skin and you’ll find the chassis from a BMW E36, extensively modified to fit. And if you peep in the frunk where you’d normally expect to find Herbie’s groceries, there’s a full-fat 505whp Nissan RB25 engine in there, unceremoniously ripped from a Skyline. Why? Well, why the hell not? 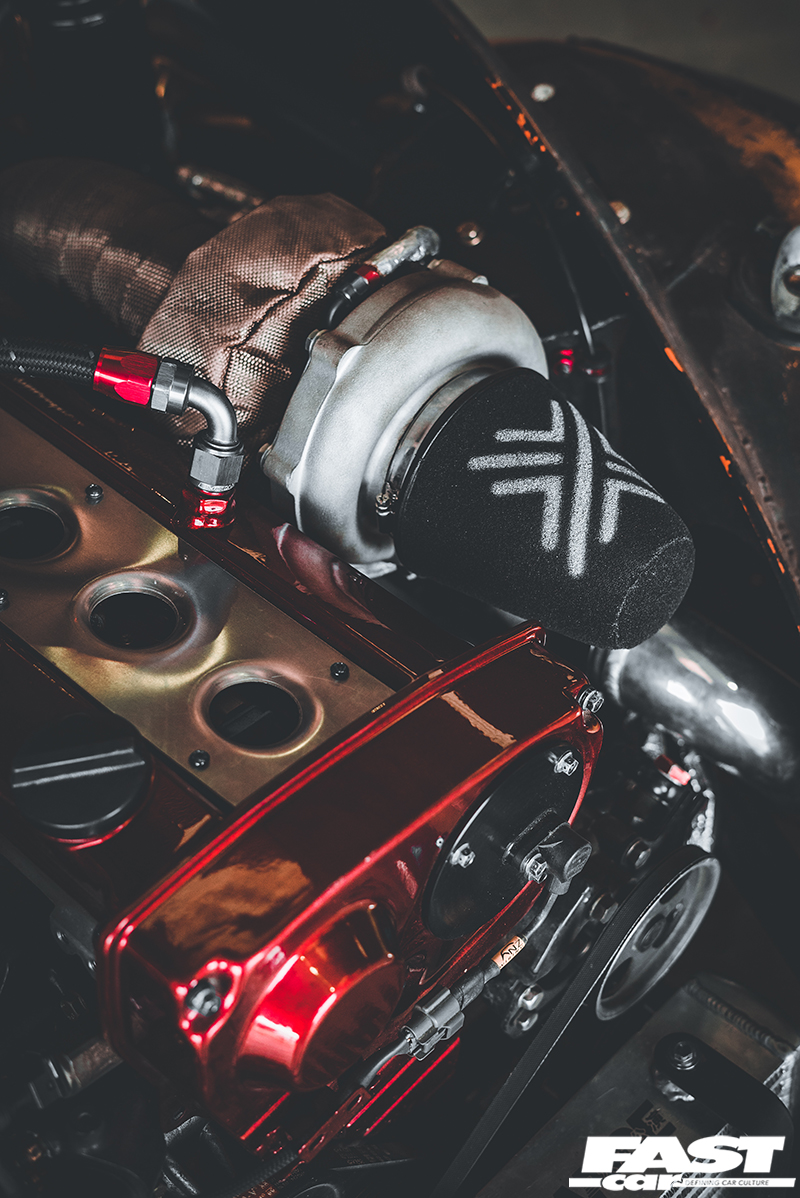 All of this unhinged lunacy is just another day for Matt Dennett, an automotive mad scientist who’s been around hardcore petrolheads his whole life. With an uncle who was a professional motocross rider, and a mum who raced bikes too, this sort of thing’s been entwined in his DNA from the start. “Anything that I could make or that I could hop on that would scare me, I was all over it,” he grins. “So as soon as the idea of the RB25 Beetle got stuck in my head, it just excited me. And here we are. Every time I get in it, I’m like a kid.”

Now, speaking of childhood exuberance and youthful passions, have a think back to your first car. Was it a project? How far did you take it? For the majority of readers, their first car will be some manner of cheap runabout hatchback, sourced for its insurability rather than for any semblance of performance or excitement. Sometimes they turn into projects, and sometimes those projects get brilliantly out of hand. And for Matt? Yep, this Beetle was his first car. A whole load of machines have come and gone since, but that Bug was the genesis of his driving endeavours. “The VW ended up sitting at a unit we had, and I was sort of restoring it,” he recalls. “I also had a BMW E36 there, one of my skid cars, and that was knackered. I didn’t have much money and we were getting kicked out of the unit, so I cut the BMW up – they were worthless at that point – and put the Beetle shell on top of the BMW chassis. Then I took it to the new unit, decided it was a good idea to mix the cars together, and that was that!” 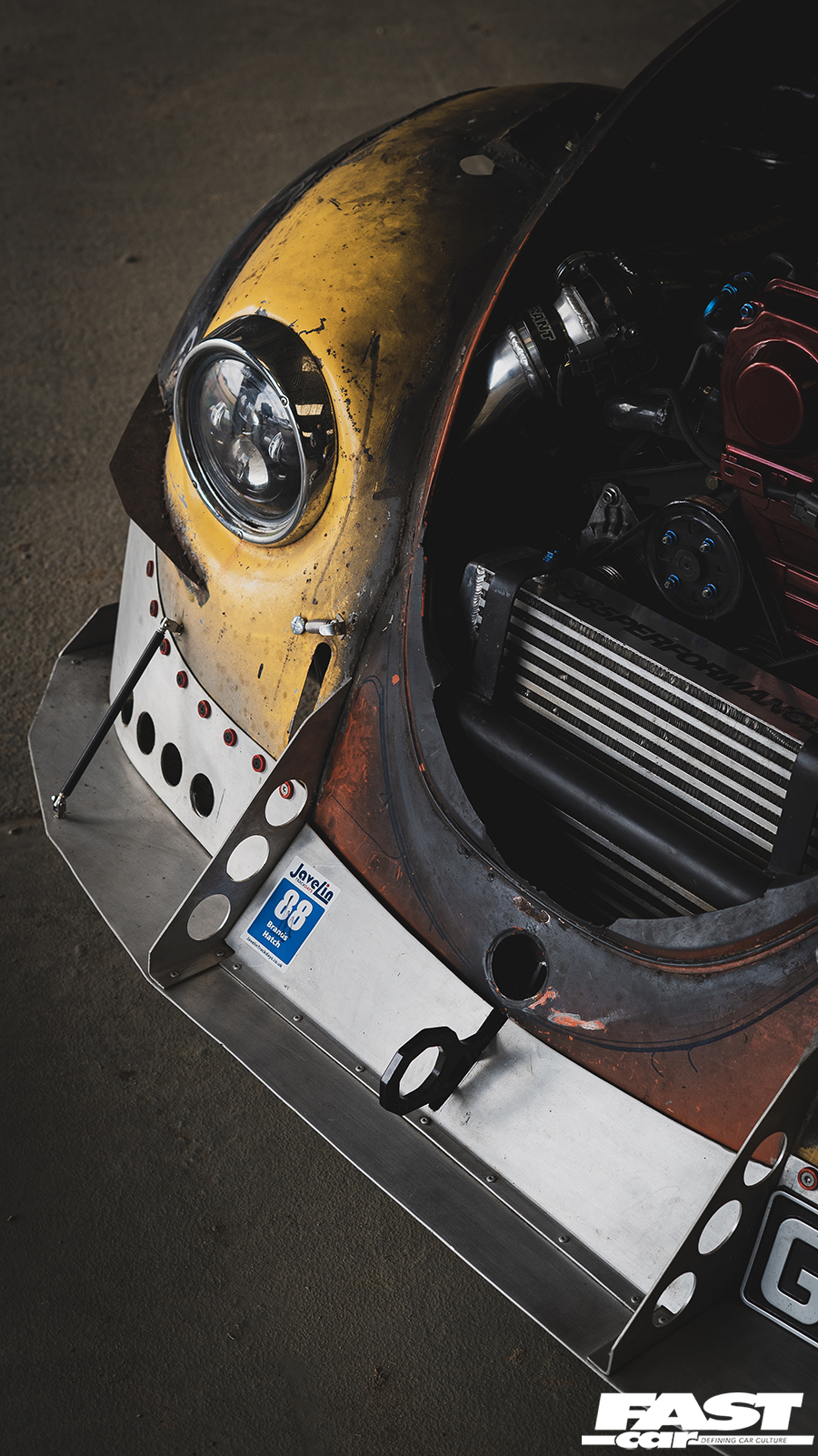 Oh right, simple as that eh? Well no, not quite. Fusing two entirely different cars is a ludicrously complicated undertaking if you actually want it to work properly – and let’s not forget that it’s not just the Beetle and the E36, there’s the Nissan motor to consider as well.

“The BMW I had was a coupe, so it was far too long to start off with,” he explains. “I had to take twelve inches of chassis out of the middle of it and then make all of that work again, so that was difficult enough in itself. And then there were all of the hurdles I’ve had to jump in teaching myself how to do everything… the rollcage was very hard, as it was the first one I’ve ever made and it’s an unbelievably tight space, there’s no tolerance for anything. And I’m a big guy so I needed every inch possible to fit everything in. Making the BMW subframe line up to where the gearbox was presented another set of challenges, and making sure all the angles were right – I turned into a massive nerd, basically, researching everything and trying to figure out what was best. And then it just became a big snowball effect of constantly chasing problems, figuring out why they happened and continuing to advance the project; now I’m at the stage where I’m hopefully past all that, but it has been a struggle at times. I started building this car six years ago; for two years of that it was at my nan’s while I didn’t really have time to do anything to it, so in all it’s taken me four years to build, and that’s all just evenings and weekends.” 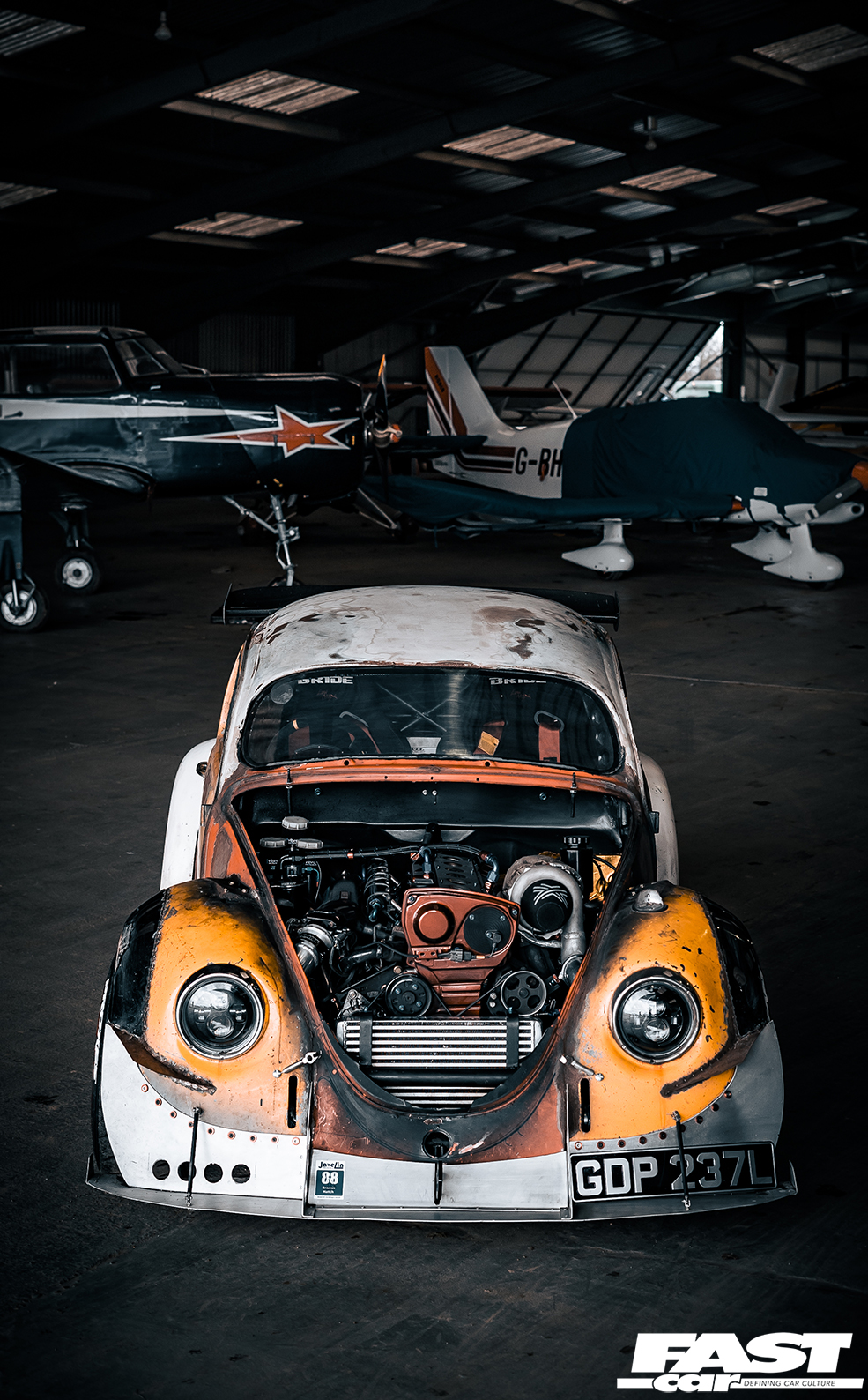 It’s been a labour of love, for sure, but it’s that enduring love for internal combustion which has meant that the project has remained fun throughout. Indeed, fun is precisely what the Frankenstein Bug was built for. It’s not eligible for racing or most forms of competition because of the extensive chassis mods, and while it can be used on the roads, that’s really not its purpose. It’s a track car in essence, and particularly talented at hillclimbing where its short ratios and short wheelbase pay dividends.

“To drive it… it’s pretty scary,” he laughs, with the manic grin of someone who genuinely enjoys being scared. “When the boost kicks in, everything at the back gets light and it starts moving around. It’s… fast. Because it weighs nothing, and with the way the boost curve comes in, with this latest setup it’s phenomenal. To begin with it was uncontrollably scary because the boost just came in too quick, it’d light the tyres up and it was undrivable, but now you can feel it. It picks up speed fast, it’s really good fun.”

Impressively for a car that weighs about as much as a Happy Meal, it’s now kicking 505hp to the rear wheels, with the latest setup being internally gated so it’s track-appropriate with no worries about noise complaints. The extensive testing process has involved taking in a lot of shows too, where passers-by are always drawn in by the screw-you rat rod vibe, then blown away when they see what’s lurking under the skin. “My favourite show to go to is probably the Players Classic,” says Matt. “Last year I really enjoyed the event there, it was a really good mix of cars – and it’s at Goodwood, which I think is one of the better places to go anyway. I’m pretty excited for this year because I’ve got track time there also. I can enjoy the show, and finally get out on the Goodwood track – it’s been one of those circuits that I’ve always wanted to drive. I’m also looking forward to Japfest, that’s always a great show. The Japanese engine in the old German car takes people by surprise.” 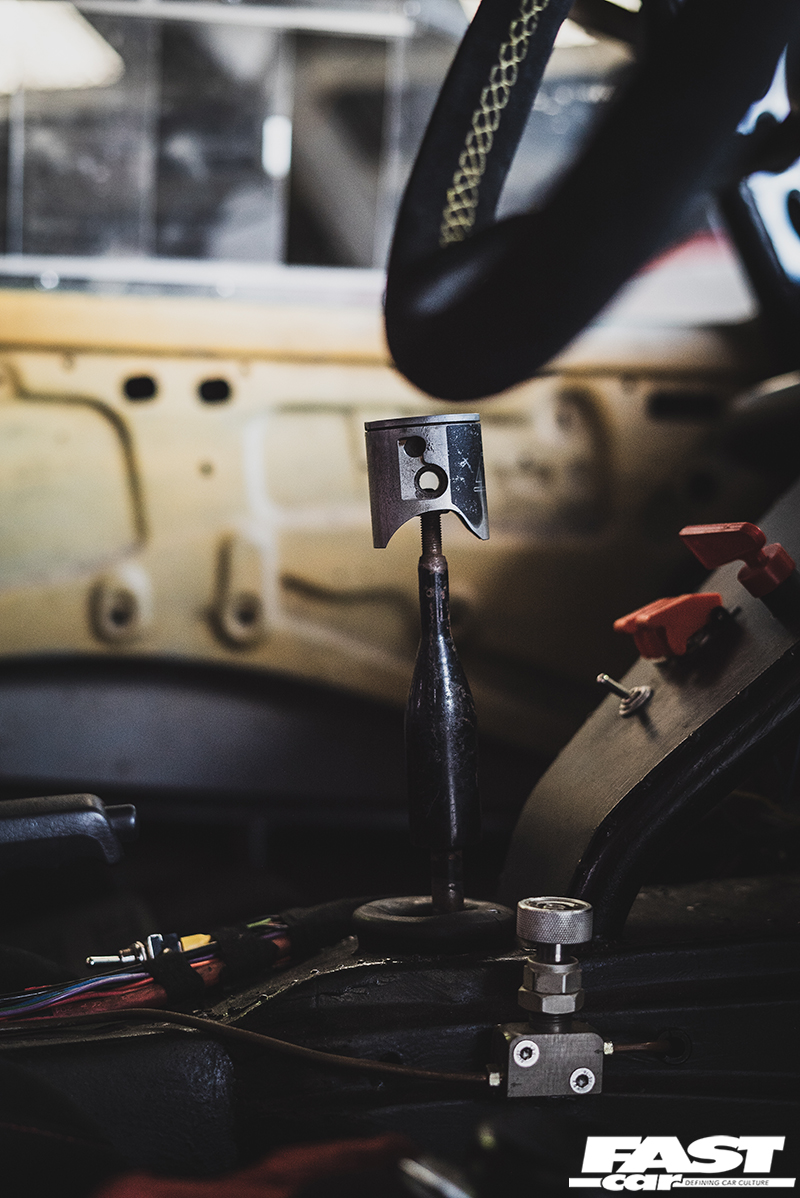 So what of that rat rod vibe, does it speak of a work-in-progress or are we seeing the finished article? “Yeah, people ask me that question a lot,” he laughs. “I will paint it at some point, but at the moment it’s quite nice to have it rough because I can hurt it and it doesn’t matter. I can thrash it about without worrying about stonechips, and if I need to put a bracket on somewhere or something I can just do it and not worry about it. I’ll keep testing it until I’m fully happy, then I can strip the car back to a bare shell and get it sprayed in some lovely paintjob and put it all back together… and then it’ll be a full-on show car and I’ll probably never drive it on track again! I like rat rods, I do like American cars, and so the look comes from that, hence all the rusted spot-welds and that kind of thing, because I like that style. I like lots of different things, Touring Cars and all sorts, so the look comes from different places – well out of the way of what a Beetle is, and all brought together into this new one-off thing. And I think it‘s worked, I think it looks cool.”

We can’t disagree there. It’s a very cool-looking Beetle indeed, super aggressive and seeming like it might rip your arm off at any moment. But that offbeat aesthetic is secondary to the sheer performance of the thing, Matt’s mad science twisting and transmogrifying the unassuming Bug into something genuinely scary. And because he likes to be frightened, this homegrown hellraiser is only going to get scarier. 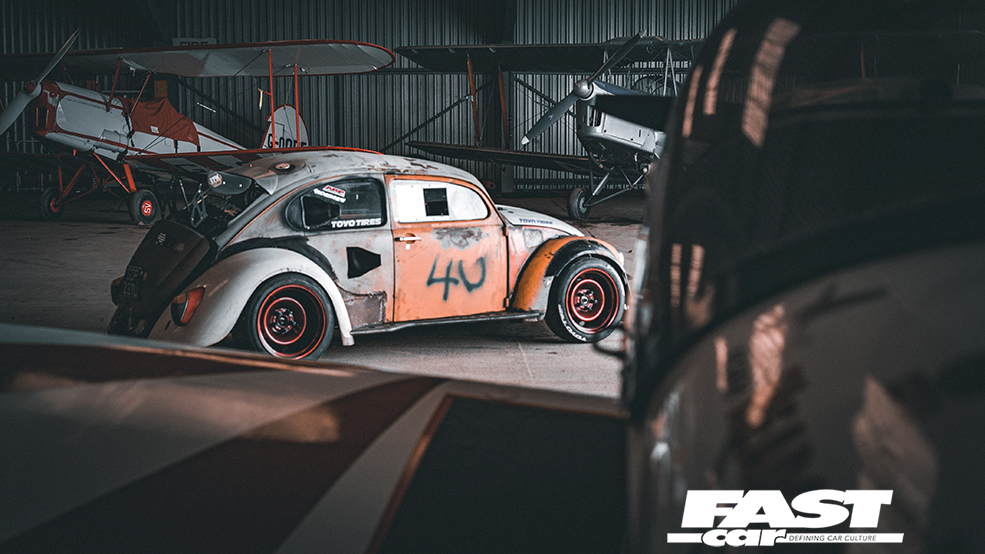