Looking rather subtle on the outside, this undercover E30 Touring can sneak around unnoticed before delivering a near-700whp turbocharged hammer blow: welcome to sleeper motoring, Swedish style…

They say that there are only two certainties in life: death and taxes. But, we say there is a third: Nordic BMW owners building insanely powerful turbo creations. It’s been going on for as long as anyone can remember, and look back through the Performance BMW annals, and you will find countless such boosted monsters. We’ll never get bored of seeing what sort of wild turbocharged creations our Nordic friends put together next, and we’ll never stop getting excited when we see something like Martin Eriksson’s (@martin__eriksson) turbocharged E30 Touring. On the outside, it looks like a fairly unassuming classic BM estate, but on the inside, well, it’s a completely different story… 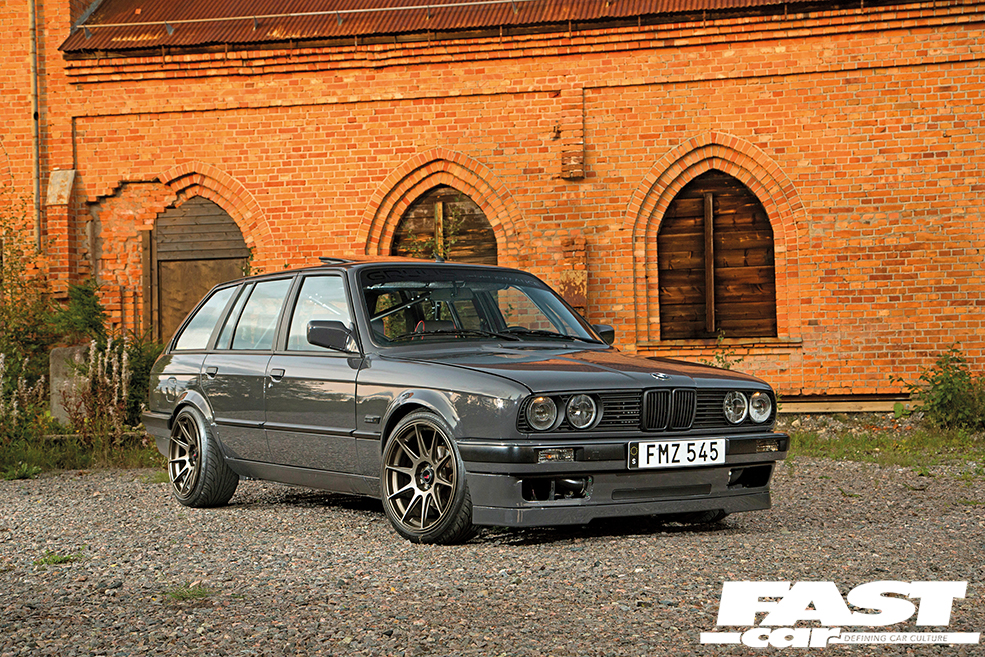 Martin lives in Sweden, and this truck mechanic has been a BMW fan for a very long time as if this E30 and his E61 525d M Sport daily weren’t proof of that already. “I have been interested in BMWs since I was very young when my cousin and I helped his older brother renovate an E34 M5 from scratch. Since then, I’ve been completely into BMW,” he grins. “My first car was an E30 325i Coupé – I bought it when I was 18 and had got a driving license because I always wanted my own,” he adds, and it’s clear that his early encounters with the classics definitely left a big impression on him. “I bought this Touring because I like the look of the E30!” he exclaims with a smile, “I bought the car here in Sweden, and it had done about 130,000km. It was in good original condition: the paint was a little worn, but there was no rust. The plan from the beginning was that I would repaint it and put in an original M50B25, but it turned out that the engine block was cracked,” he says, and while that’s never a good thing, it does give you the excuse to make some improvements while you’re carrying out repairs… 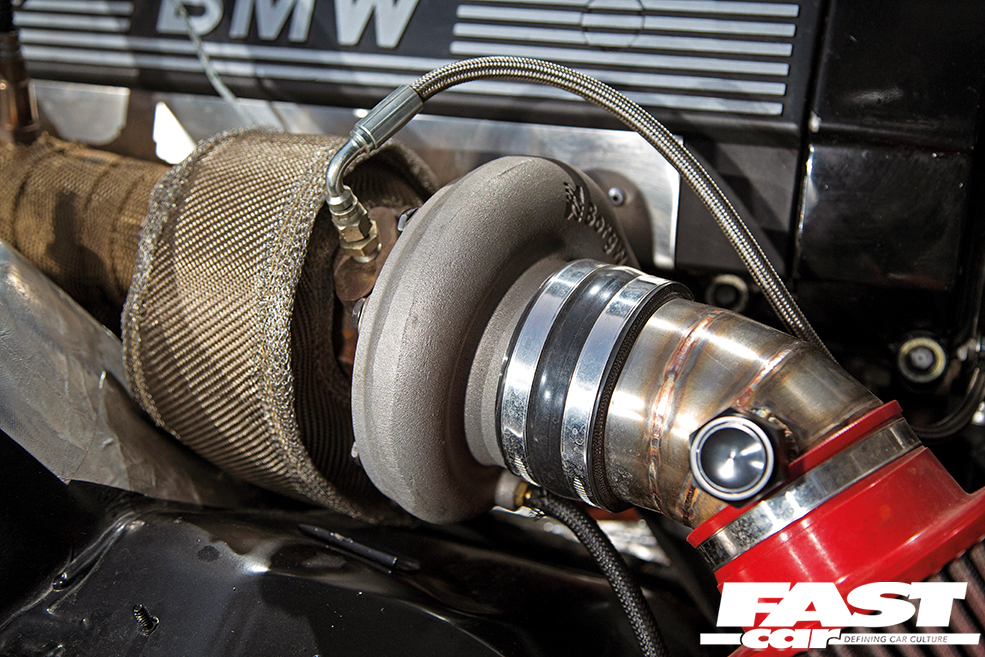 “I started working on the car the day after I bought it and picked it apart. I had it the workshop I worked at before and rolled it in and out after working hours and ground the paint down and started with the paint job,” Martin says. In terms of aesthetics, he’s kept things very simple. He has treated the Touring to a fresh paint job, but, as you can see from the pics, it’s a very understated shade of solid grey, which looks great, but ensures this Touring effortlessly slips under the radar wherever it goes, which is exactly what Martin wanted. “The only ‘styling’ I did want was the E30 iS lip at the front, but I wanted the car to look like a sleeper with nice wheels,” he says, and that’s exactly how it looks. Sure, it sits a little lower than a regular E30, but it’s not scraping on the ground. There is a fat exhaust, but it’s just a single, downturned tip, and there are those bronze 17” Japan Racing JR11s that mean this E30 does look modded, but they don’t exactly scream out for attention. This is the sort of build that would get an admiring second glance from a BMW enthusiast out on the road, but there’s absolutely no way anyone else would give it any attention, or that anyone would have any idea about what was going on under the bonnet… 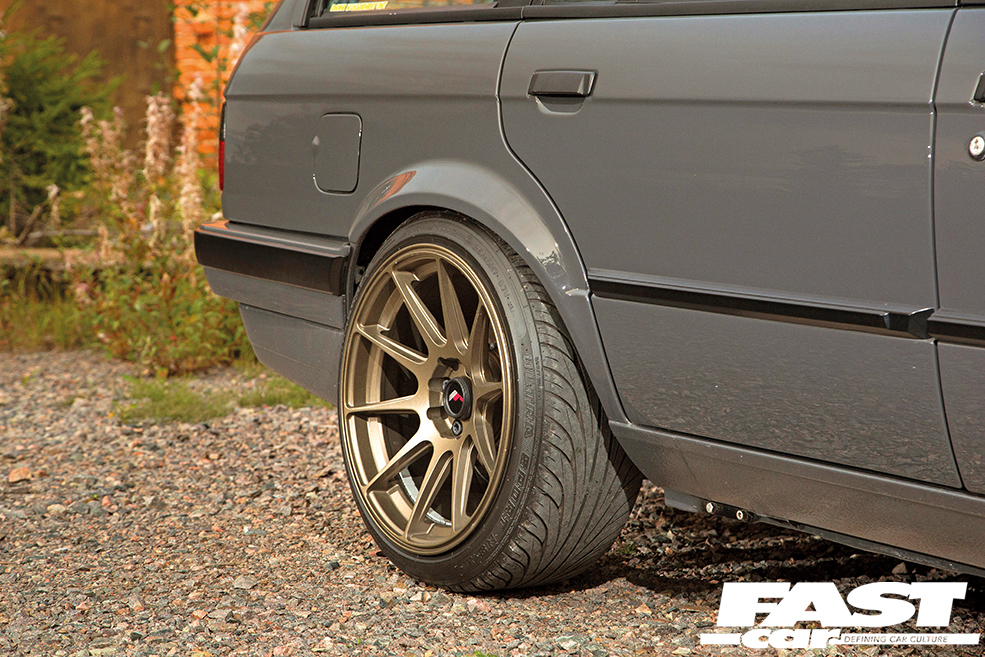 While Martin’s E30 Touring was looking good, with a cracked block it was going nowhere, and so it was now time for some serious engine work. “I took it out the old M50 and fitted a new engine block with H-profile rods, an ethanol conversion and a BorgWarner Airwerks S200 SX-E turbo. I also added Siemens 875cc injectors, Ecumaster management, and fitted an E36 M3 gearbox, Sachs 618 pressure plate, four-puck KEP clutch, and an E28 LSD diff. It delivered 480hp and 457lb ft,” says Martin, and those are some fine numbers, but he was just getting started. “I wanted more, so the year after, I took out the engine again, and it was forged and balanced. I replaced the injectors with Bosch 1300cc ones and fitted a new intake, then I remapped the car, and it delivered 585hp and 538lb ft,” a healthy increase for sure, but there was a lot more to come. 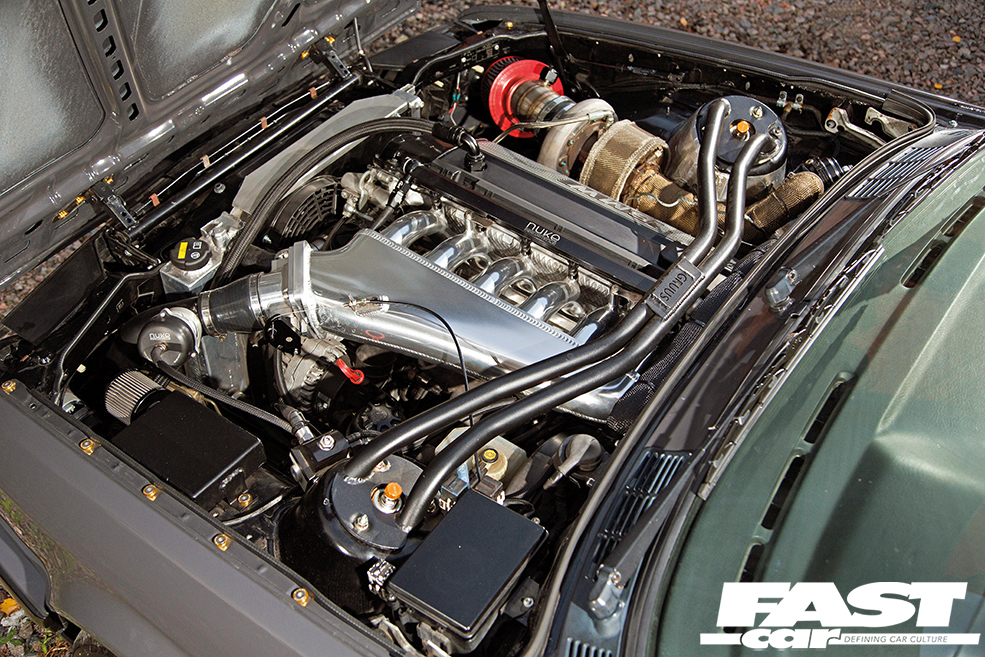 “In the winter of 2019/2020, the idea was to change the clutch to a twin-plate Tenaci one, but at the same time, the issue of Bilsport came out with Joakim Ottosson and Nisse Järnet and their DKGEcu for DCT gearboxes. I’d been looking at Nisse’s YouTube channel for a long time and had long been considering doing this gearbox swap,” smiles Martin. “So in January 2020 I went to Nisse and bought an M4 DCT gearbox, and the work began immediately with soldering and construction of the wiring harness etc. To get the feeling of having a sequential gearbox, I bought a DCT shifter from C-Parts here in Sweden. After many hours of programming and help from Joakim Ottosson the car goes like a dream,” he grins, and the finishing touch was, naturally, more power. “In the middle of summer 2020, I went to PPF and mapped the car again, so today it delivers 672whp and 600lb ft wtq,” says Martin with a smile, and that combo has transformed this turbocharged E30 Touring into an altogether different beast. The turbo M50 pushing out almost 800hp at the crank is wild enough on its own but combined with a DCT gearbox in an E30, that’s something else.

That sequential DCT shifter is the centre point of the interior, and it looks awesome. The tall shaft really delivers that sequential ’box sensation, while ahead of him, Martin has a digital gear display that sits in the middle of the otherwise stock gauge cluster. The seats and door cards have been retrimmed in a red, grey and black colour scheme that adds a bit of personalisation to the interior. There’s also a roll-cage that extends to the front of the cabin, a wise safety addition when you’re putting this much power into a car that isn’t especially solid by modern safety standards. 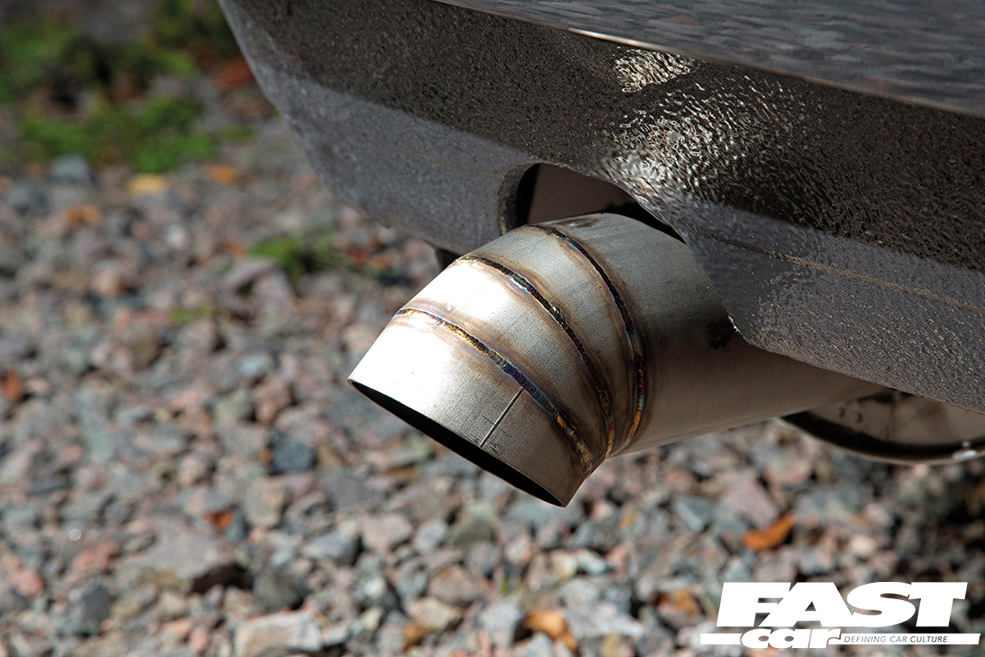 Of course, asking an E30 to cope with almost 800hp requires a little work beneath the surface, and Martin has made sure to give the chassis some attention too. “I use Yellow Speed two-way coilovers, and a reinforced rear subframe with the control arms reinforced and StrongFlex poly bushes both in the front and in the rear. I want the chassis to be stiff and fun to drive,” explains Martin. This setup does that and also offers plenty of adjustment to fine-tune the handling, allowing him to really enjoy putting all that power to the tarmac. 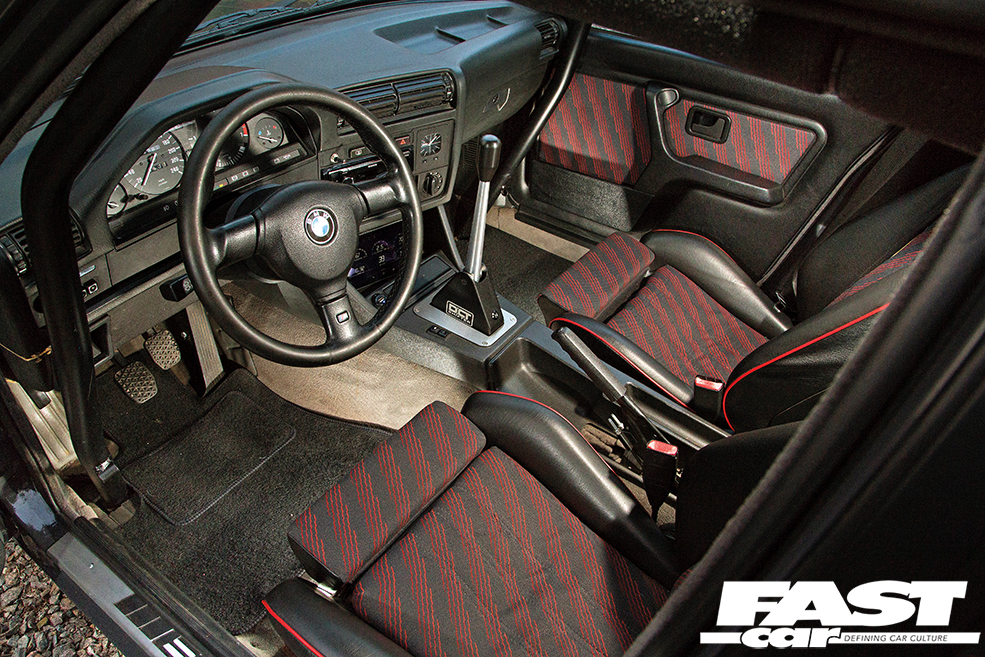 This turbocharged E30 Touring is an absolute beast, there’s no other way to describe it. The power is absolutely insane, and it must make driving this a real white-knuckle experience, but it’s the DCT gearbox swap that really makes it special. It definitely sets it apart from the crowd, and it’s also Martin’s favourite part of the whole build. “The M4 DCT gearbox is my absolute favourite mod. It’s sick!” he exclaims with a massive grin, and it was clearly worth all the work and effort. All that power and performance topped off with that sleeper styling make this an awesome E30 Touring to be really proud of. But while Martin has spent seven years working on this car, it is, in his own words, a rolling project. “There is always something new I want to do with it – next I will be fitting Porsche calipers and 320mm discs soon,” he says, and no doubt there will be more mods to come beyond that. This turbo E30 Touring may already be a bit of an animal, a snarling monster that shreds tyres at the drop of a hat, but there’s always room for a bit more of everything. Whoever said you could have too much of a good thing…? 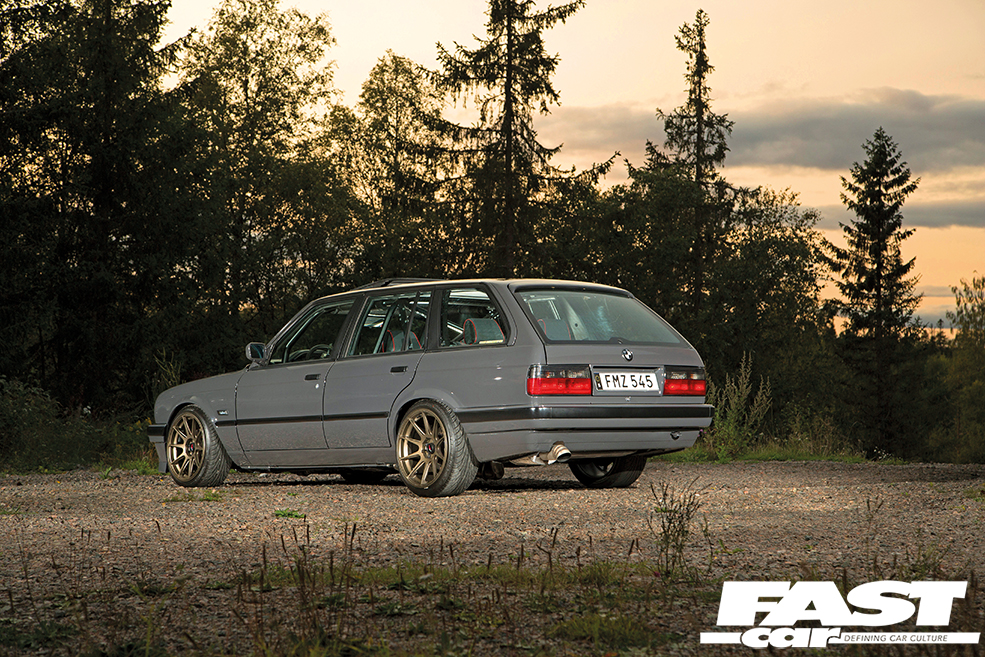