After experiencing the adrenaline rush from a friend’s project, Scott Hammond had to build a turbo EK Honda Civic of his own…

As humans we are all genetically susceptible to suffer from addiction. Our brains are wired in such a way that, if we experience something we like, we often go on to crave that experience again and again. Be it the euphoric mind-altering high we get from hard drugs like Heroin or crack cocaine, or the chilled out feeling we experience from a puff on a joint or a few too many Stellas; if we enjoy it, then the seed has already been sown. But it’s not just narcotics or the results of fermented grains that can set a cycle of addiction into motion, as the very natural rush we get from our own body’s adrenal gland can be just as strong, as 39-year-old Scott Hammond found out.

“Say the term adrenaline junkie and people think of rock climbers, bungee jumpers or those nutters that take selfies at the top of skyscrapers, but I get the same kind of kick every time my EK Honda Civic comes on boost!” laughs Scott, as he describes the high that he has been chasing for most of his adult life.

“I’ve owned loads of fast cars in my time, but nothing compares to the rush of a boosted stripped out Civic.” 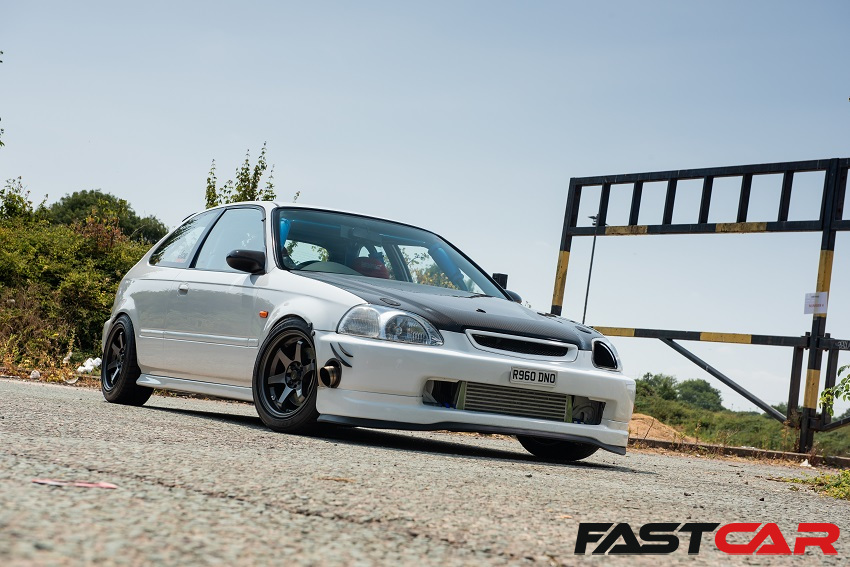 It’s as if his previous cars were the gateway drugs that lead Scott to develop his petrol-powered craving.

“I always knew that I had a growing infatuation with forced induction,” says Scott with a wry smile. “When I look back over the cars I’ve owned – Subaru Imprezas, Escort Cosworth, even Metro and Uno Turbos – they’ve all featured that demonic metal snail under the bonnet.’

But what began as a mild habit soon developed into a full-on dependency as he searched for ever-greater performance to satisfy his needs.

“It reached its peak when I went for a ride in a friend’s EG6 Civic with a bolt-on turbo kit,’ Scott explains. ‘The performance was incredible! I’d been in some quick naturally aspirated Hondas before, but this was on another level entirely.’

And like the Heroin addict that gets irretrievably hooked from his first high, for Scott there was similarly no going back.

“I immediately became obsessed with the idea of owning a turbocharged Civic,’ he remembers. “I’d spend hours watching Youtube videos of cars with various setups and researching costs and kits.” 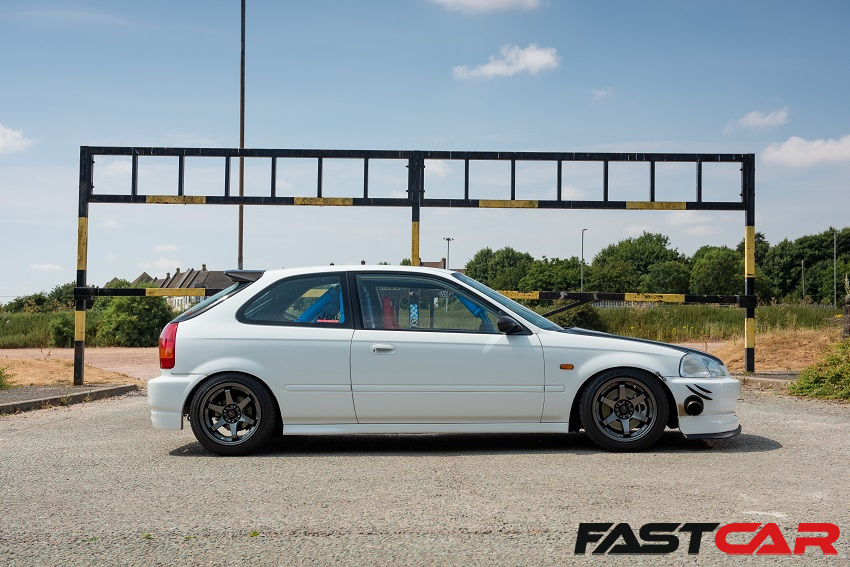 Scott’s fastidious investigations revealed that as far as performance cars go, there are few out there that can match the bang-for-buck results you get from a EG or EK Civic with a bolt-on turbo kit.

“For the money, I don’t think there’s much that will touch them,” reckons Scott.

And so, the hunt was on for a suitable steed to create his ultimate adrenaline rush.

“I started looking for a shell that would become the basis for the build,” he says. “I was after either an EG or an EK Honda Civic model ideally, as they can be picked up for reasonable money, are lightweight and can easily take a host of engine options.’

And it didn’t take long until he stumbled across something that caught his eye. 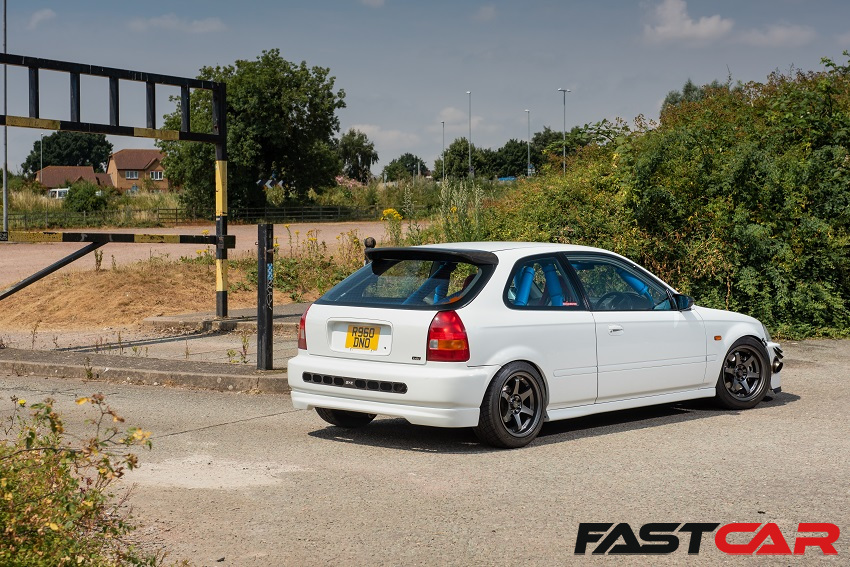 “I was looking on a Honda sales page on Facebook when I spotted a mint EJ9 Civic rolling shell which had been resprayed Frost white and featured a load of cool mods, many of which I was planning on doing anyway, so it was the perfect option really.”

The shell he bought had even once housed a turbocharged B18C engine, however the previous owner had decided to sell up and buy something else after blowing the engine.

“I couldn’t have asked for a better base,’ Scott says. “It was even the colour I wanted! The fact that it came with pretty much everything that’s on the car now – minus the engine, transmission and the carbon-fibre – meant that, at the £3k asking price, it was a much more cost-effective option than building something myself from scratch.” 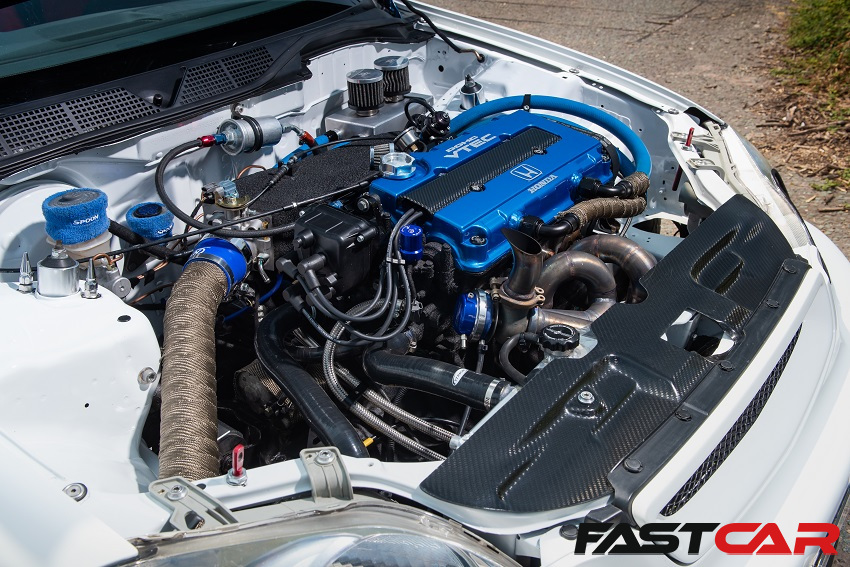 So excited was Scott at the potential of his new purchase, that he wasted no time in getting started on bringing it back to life with a few of his own added touches thrown in for good measure. The first thing on his list was to tidy up the empty engine bay.

“The previous owner had the car resprayed in Frost white, but left the engine and interior blue,” says Scott. “So, after running all new lines, pipework and wire-tucking where I could, I decided to paint the bay white to match the exterior.”

With the bay of the EK Honda Civic now gleaming white, it was ready to receive the monster of an engine that Scott had been craving.

“I’d sourced a B18C4 engine and S9B five-speed gearbox with a limited slip diff from a Civic MB6 which was for sale on a Honda breaker’s page on Facebook,” Scott recalls. “It was in good condition and low mileage, so was an excellent candidate for forced induction.’ 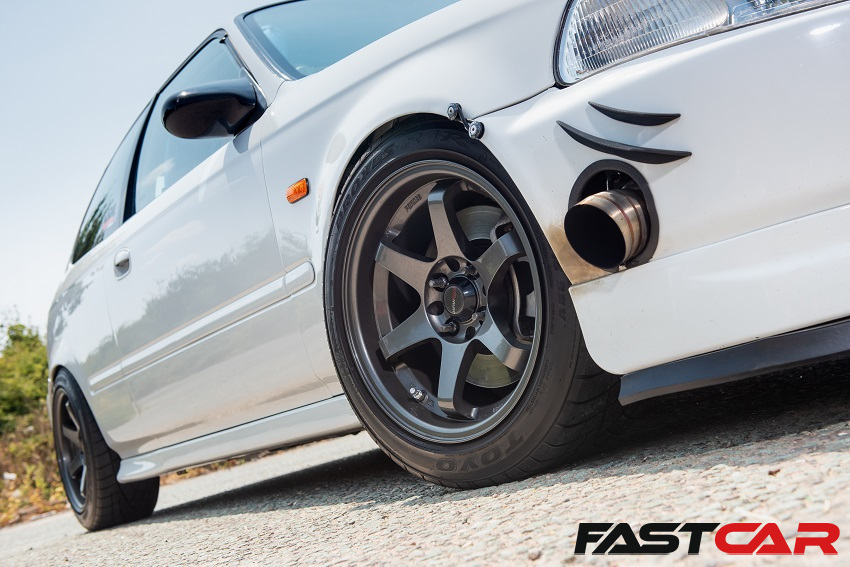 Scott diligently prepared the 1.8-litre naturally aspirated lump before painting it in VHT wrinkle black paint and readying it for the forthcoming introduction to boost.

“I’d been looking into turbo kits and reckoned that the Racetech twin-scroll kit with a TD05 turbocharger was the way to go,” he says. “The kit is rated for 500bhp and comes with the turbo, tubular exhaust manifold, downpipe, all oil and water lines plus an intercooler and pipework.”

However, rather than simply bolt the kit on as intended, Scott had a plan to make the upgrade even wilder…

“I wanted a front exit exhaust,” he smiles. “Which meant fabricating my own 3-inch downpipe and connecting it to a KTuned muffler which pokes though an aperture on the driver’s side of the front bumper.” 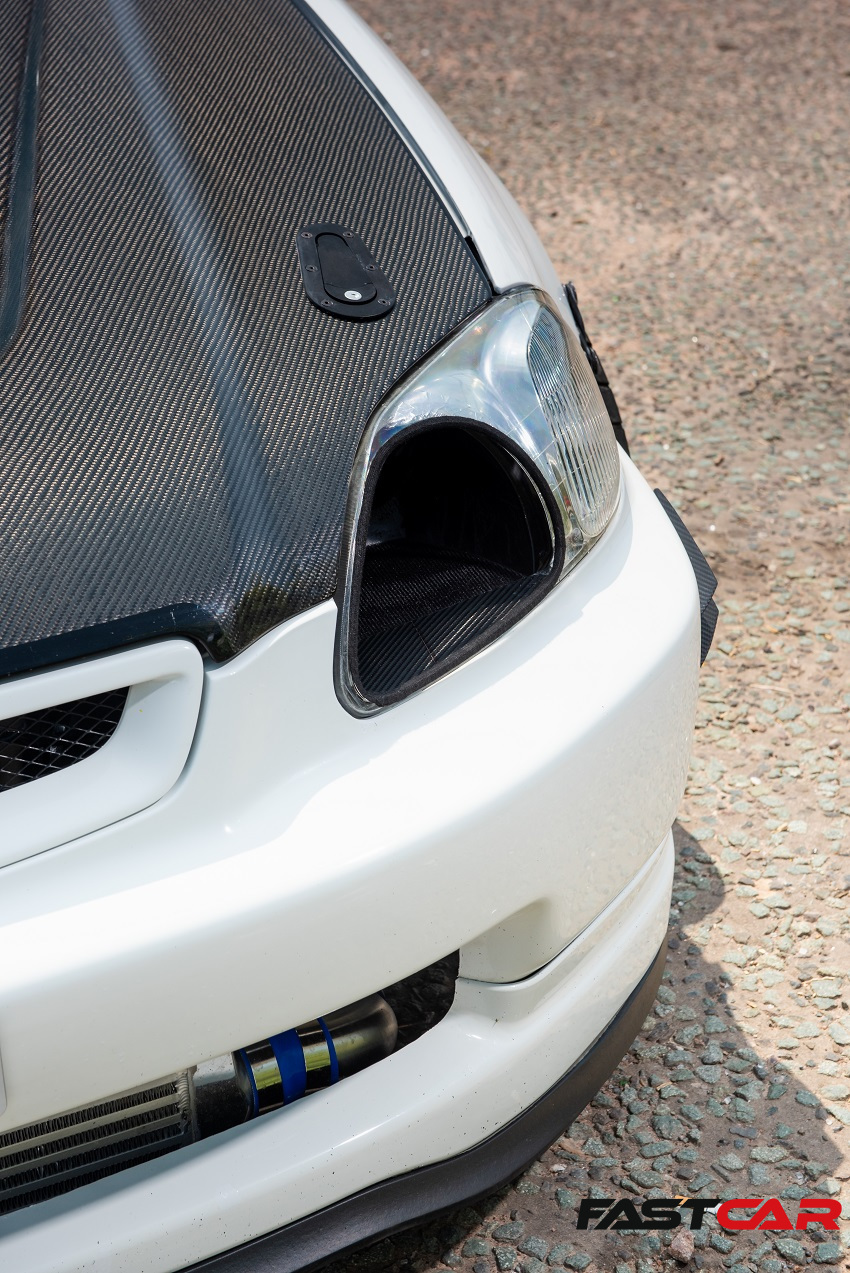 This was also accompanied by a custom headlight intake plus a screamer pipe off of the Turbosmart Compgate wastegate, which vents straight up and out of the bonnet. Needless to say, that Scott’s neighbours are only too well aware when he’s about – this thing is loud!

Combined with a secondhand Racetech inlet, 750cc Grams injectors, a 70mm Skunk2 throttle body, a Japspeed radiator and mapping of the P28 ECU from Jesse Halford of J.Cal, the result of all of Scott’s hard work is an engine pushing 330bhp at a very conservative 0.8bar boost.

“The turbo kit is capable of up to around 500bhp, but for that I’d need to pull the engine apart and fit forged internals,” Scott explains. “Which is definitely something that I’d consider in the future, but to be honest it’s a pretty wild ride as it is!”

Scott’s wisely employed a Stage two Competition Clutch to help transmit all his newfound power to the gearbox, while the limited slip diff means the tortured rubber wrapped around the 8x15in Japan Racing wheels has a better chance of laying it down effectively to the tarmac. 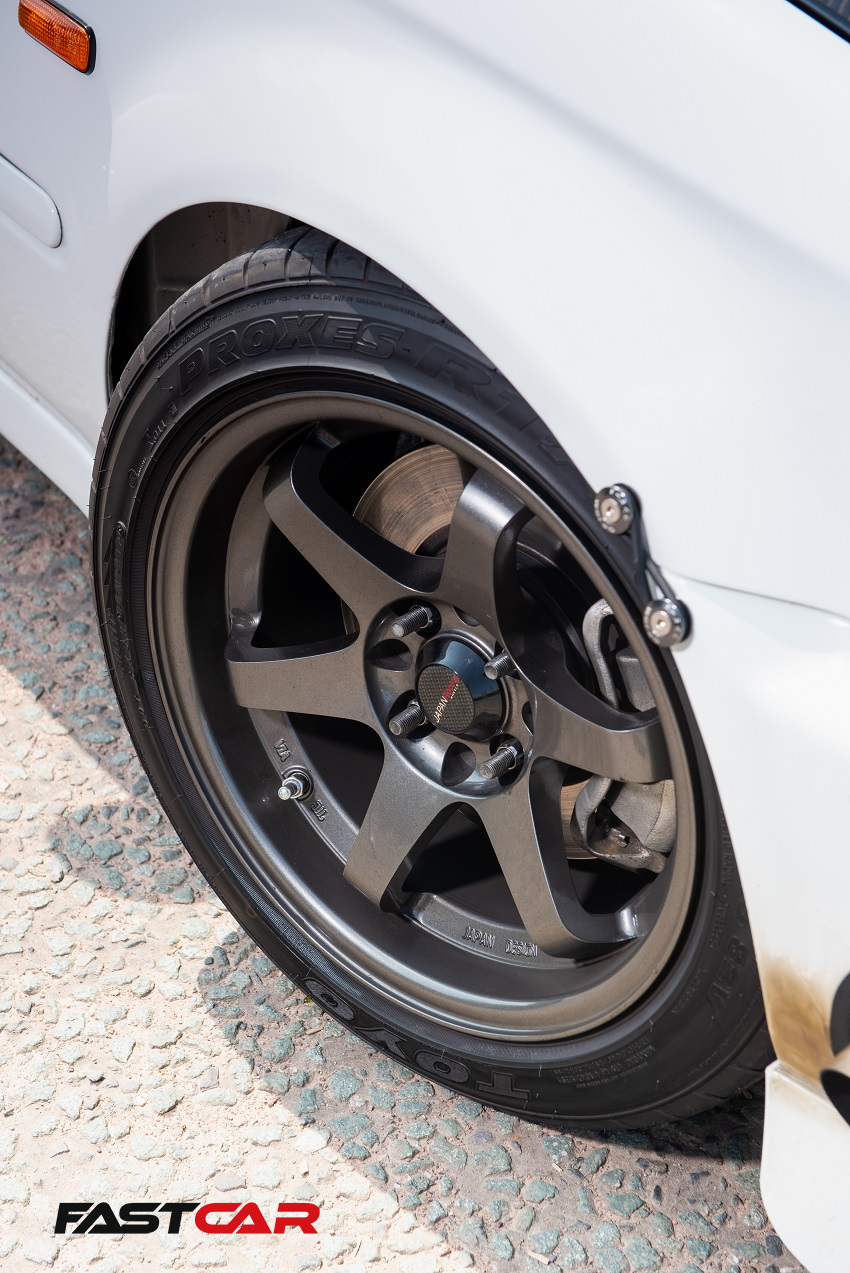 Once the engine and gearbox were in and the car running sweetly, Scott turned his attention to the bodywork.

“The shell already benefitted from front and rear bumpers and lips from an EK9, plus a carbon rear spoiler, so I decided to continue the white and carbon look and set about finding some more of the black weave, to both look good and lose a few extras grams of weight.”

Scott managed to acquire the VIS-style carbon bonnet after engaging in a particularly tense Ebay bidding war with another keen carbon fan.

“It went for more than I was hoping to pay in the end, but I just had to win the auction as a matter of principle, as much as anything,” Scott laughs.

Other trick carbon parts that Scott tracked down are the Spoon-style mirrors and front bumper canards, both of which he found on a Honda breaker page on Facebook. 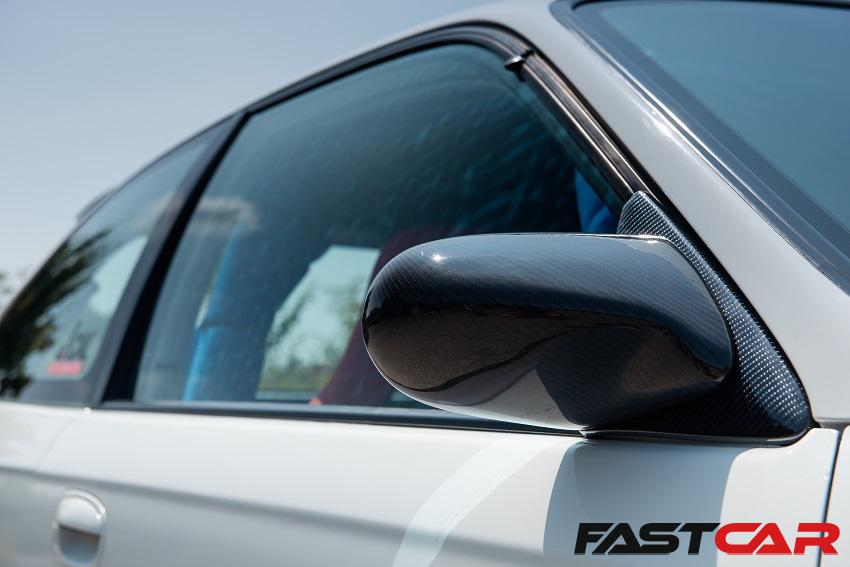 “I’ve managed to find a lot of the parts secondhand, either through social media pages or auction sites like Ebay, and by doing much of the work myself too, I’ve really been able to keep the costs down,” Scott says. “Of course, there are some things you just can’t, or at least wouldn’t want to, skimp on, such as the turbo kit, which I bought brand new, plus paying out for a decent mapper to calibrate the ECU, but other than that, this car owes me very little.’

Other than add some gauges and a steering wheel – which he has fitted to every car he has modified over the years – Scott’s made no changes to the car’s stripped and caged interior, as the Cusco cage and Bimarco Dakar FIA bucket seats with Reamco four-point harnesses are spot on for what he needs.

“I’ve been extremely lucky with this project, in that the previous owner had already carried out much of the work that I was planning on doing, and even gave me help and advice after the sale had gone through to help me achieve my goal,” Scott says. “And that’s meant that I’ve got the car that I’d been craving for so long for a lot less cash and effort than I expected, which puts that all-important performance-per-pound rating through the roof!”

But that’s not to say that this is the finished article just yet, as Scott still has plans for further mods that he wants to make to this EK Honda Civic in the future. 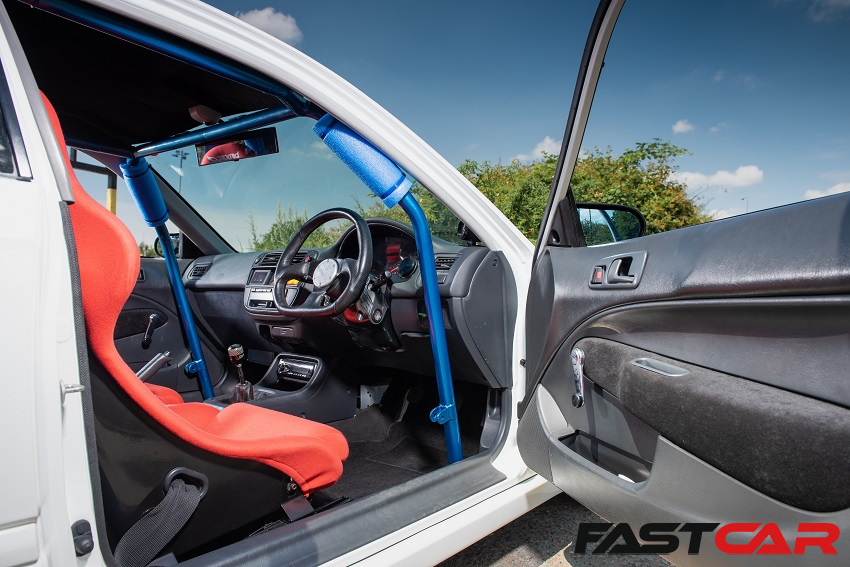 “I reckon I’ll probably paint the interior Frost white to match the rest of the car and add some carbon front wings too,” he smiles. “Then I’ll no doubt pull the engine again and forge the internals so I can up the boost and extract the full potential from the turbo setup.”

And so, the cycle of addiction continues. Even though Scott now possesses that which he so craved, his brain and body is already feeling the diminishing returns so common with addicts. Over time that rush dulls, to the point that it no longer hits the spot, meaning an even bigger dose is needed to get their fix. And for Scott this is likely to mean pushing his turbo’d tearaway to over 500bhp.

But if cars like Scott’s stunningly hot EK Honda Civic are the direct result of an insatiable need for speed, then maybe we all would benefit from getting totally addicted to boost?

BRAKES: VTi setup all round with new calipers and hubs, Hel braided lines

THANKS TO: My girlfriend for putting up with me and the car, Dominic for helping and welding up the fab work, Lee Ferrel for help and advice throughout the build selling me a top shell, Jesse Halford of J.Cal ECU calibration for sorting the car’s running issues and the awesome map – get at these lads for any Honda work or maps – and thanks to my boss Danny Eady for letting me have the day off work at short notice lol!