After spotting this tuned Sapphire RS Cosworth at an event in 2019, the Fast Ford team has managed to track all 538bhp of it down to feature it…

Buying a used Ford can be a stressful experience. Will it look like it does in the photos? Is it a genuine advert – or just another scammer trying their luck? What if it turns out to be stolen – or a Cat D? Add to this the constant, nagging worry that the person selling it is a world-class messer, liable to change their mind at the last moment and decide to keep it or sell it to someone else, and it’s a minor miracle that any of us bother to even try to buy a used car at all.

Sure, there are lots of things we can do to try and protect ourselves, from detailed history checks to asking an owners’ club if anyone knows the car, but when all is said and done, buying a used car is always a risk.

For Christian ‘Hippy’ Taylor, owning a Cossie was something he’d always wanted to do. 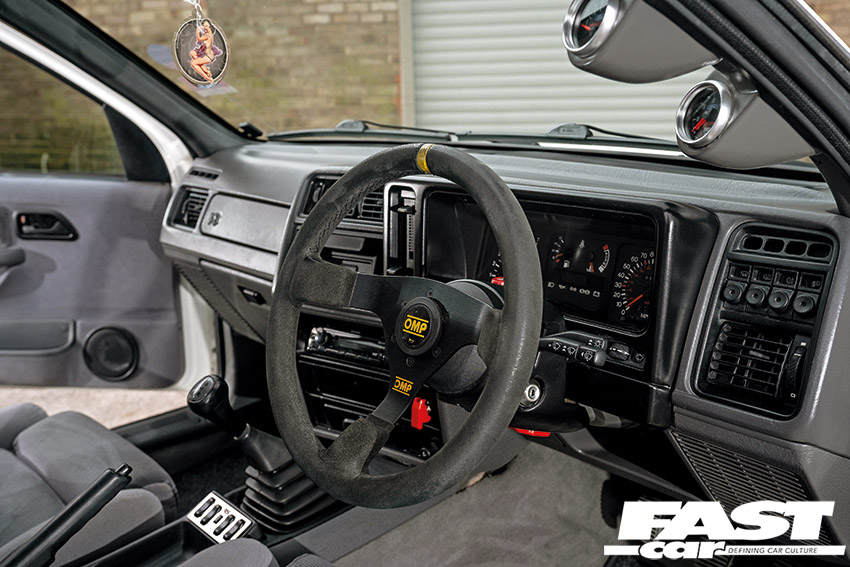 He says, “I started out with a Mk4 Escort 1.4, which was given the full RS Turbo treatment, including engine, interior and exterior bits.”

Unfortunately, his pride and joy was T-boned by a woman in a Micra (why is it always a Micra?) and his relationship with fast Fords was put on hold.

During the subsequent years, lots of different performance cars came and went, one of which was even a Vauxhall (don’t tell anyone). But it was the Ford itch that really needed scratching.

“I spotted the Cossie for sale and agreed to go and look at it,” says Christian. 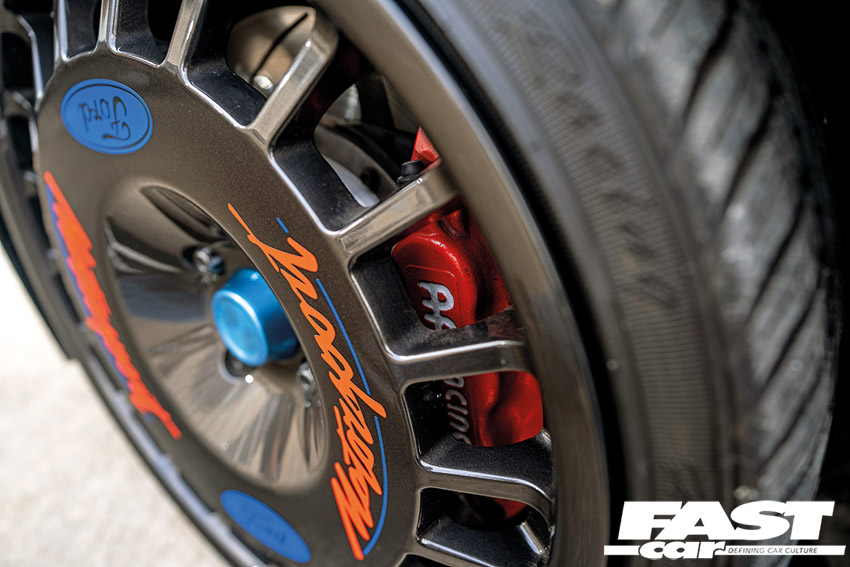 The mildly-modded Diamond White RS Cosworth looked to be the ideal project to get stuck into. The only issue was that the owner lived in Manchester, a good 200 miles away.

Not a man to be put off by a bit of distance, Christian booked a flight and headed up north to do a deal.

Having given the car a good examination and checked all the paperwork, a deal was indeed done and he drove his new purchase home to the south west.

“I did worry that it might not make it. But it got me home, no problem,” he remembers.

But that was about all it did, because shortly afterwards, the head gasket decided to let go – as Christian explains: “I removed the engine to see what damage was done, but it ended up being total scrap.” 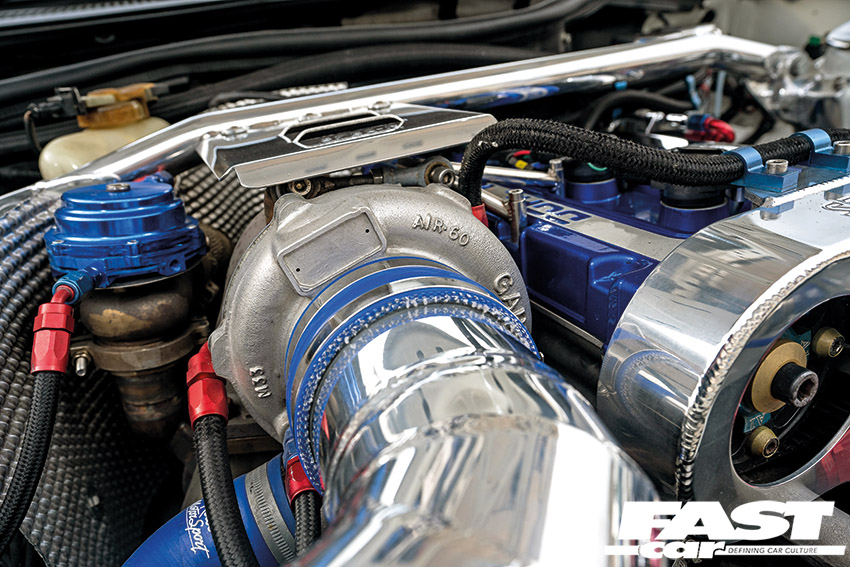 Not a man to give up easily, he put it down to experience and formed a plan: “I got hold of a 200 4×4 block and set about sourcing parts for a new YB engine,” he reveals.

But that wasn’t all. He continues, “I thought, if I’m going to the trouble of a rebuild, I might as well tune it. My mate Dave from DP Motorsport built the engine, and I started the rest. Before I knew it, it was a bare shell.”

Over the next 18 months, the tuned Sapphire RS Cosworth was transformed, with pretty much every aspect of it being treated to a makeover.

The engine spec has evolved several times over the last seven years-or-so, with Christian trying different setups to get the best out of the YB unit.

He says, “I decided I wanted more power, so changed the turbo and had it mapped again, before changing the fuelling, head, cams etc.” The new turbo delivered more power, but it came at the expense of driveability. 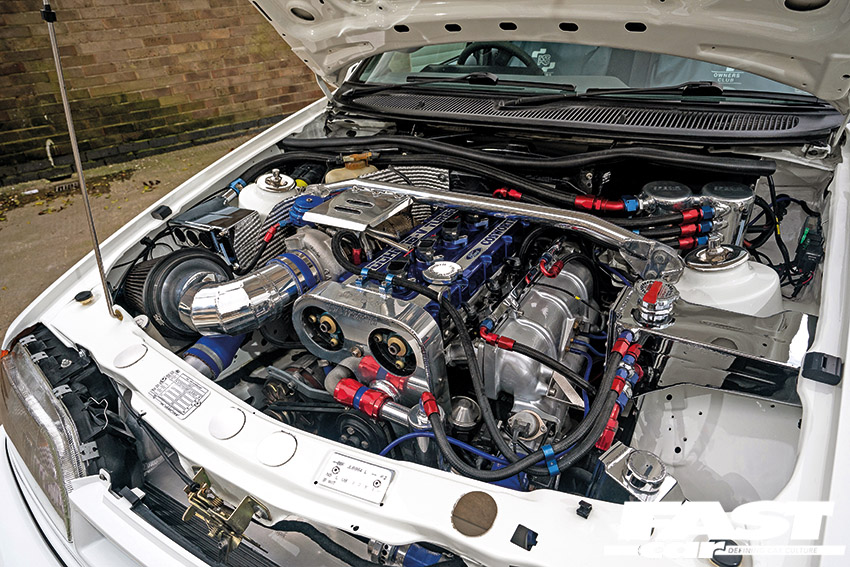 “It was pretty laggy, so I changed it again and now it’s much better,” says Christian.

Pop your head under the bonnet and you’re greeted by plenty of go-faster bits – many of which are lovingly polished.

“Pete at Spec-R has supplied many of the parts,” says Christian. These include the breather system, large intercooler and the turbo elbow, which is a true work of art.

The bits you can’t see include Mahle oversized pistons and a reground and polished crank. The whole shebang is controlled by a Link standalone ECU, which allows a full range of functions such as launch control and anti-lag.

“I only use the ALS at the moment, but everything is there if I want to set it up,” confirms Christian. 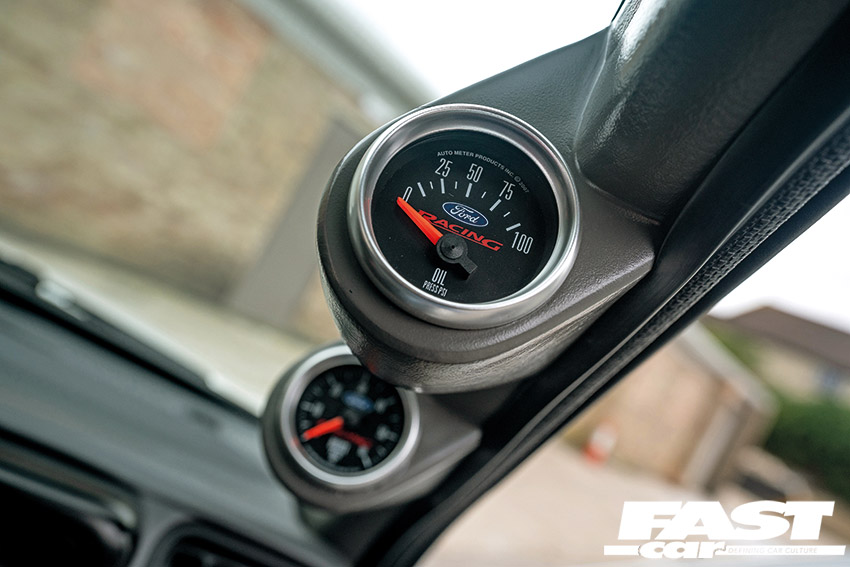 Several different maps have been applied over the years, the latest of which has delivered a solid 538bhp, courtesy of Midlands-based Martin Batty.

“The power delivery is different from a modern car, but it still gets up and goes. The arse end wants to overtake the front,” laughs Christian. “It’s great. You just need to be careful and know when it’s going to happen.”

An AP Racing six-paddle clutch transfers all that grunt via the factory T5 gearbox, although Christian would like to upgrade to a sequential in the future.

The chassis on the tuned Sapphire RS Cosworth has been fully upgraded to cope with the extra horses, allowing Christian to make the most of that raw power. Underneath you’ll find Gaz Gold coilovers, which do a great job of firming up the ride. 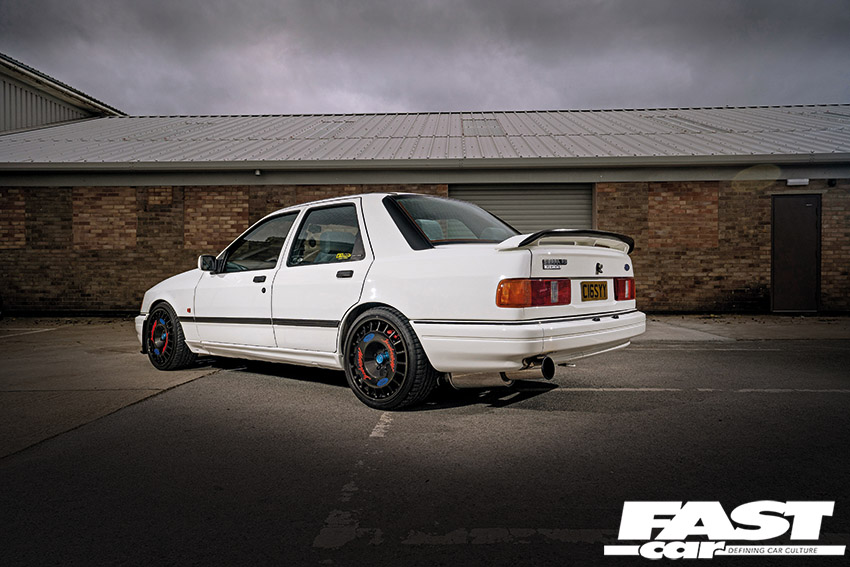 “They’re not lowered too much; I did have them very low, but it ruined the handling.” The chassis upgrades are finished off with a full complement of poly bushes, together with an MK Motorsport six-degree rear beam, adjustable bottom arms and tie rods.

Perhaps the most striking part of this tuned Sapphire RS Cosworth is the wheels, as Christian agrees: “I saw a set of Rotas in gloss black on a white 4×4 and really liked them.” They’re certainly different from the Comps he previously ran, but the 8.5J width meant he had to roll the arches and cut away the wing brackets for clearance.

Peeping out from behind the wheels is a set of AP Racing six-pots, which do an admirable job of stopping this hard-charging Saph.

Inside, things are pretty much factory-spec, save for a tactile OMP steering wheel and a couple of gauges mounted on the driver’s A-pillar. Nothing wrong with that, though, as the stock Recaros are in fine fettle. 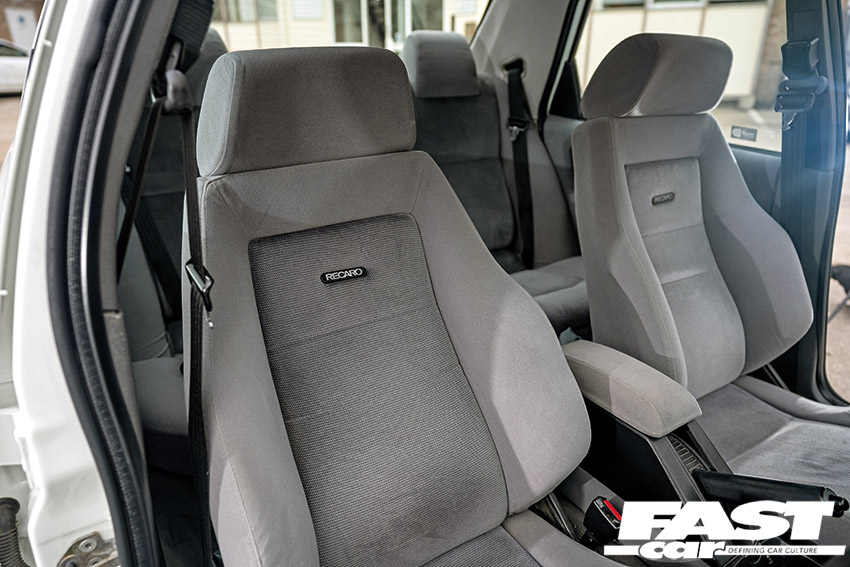 Overall it’s a very nice build that makes good power, which begs the question, why is Christian about to take it apart?

He says, “I’ve been planning a refresh for ages and have decided to take it off the road.” A new YB lump has been acquired and Dave Pritchard is going to build it up and install it.

“It will be a similar spec to Dave’s Ford Escort,” explains Christian, “A Smith and Jones alloy block, 9180 BorgWarner, different cams, CNC-machined head, big-wing sump, new pistons, crank etc, so it should be around 700bhp.”

While he’s swapping the engine, the rest of the car will be getting another makeover. 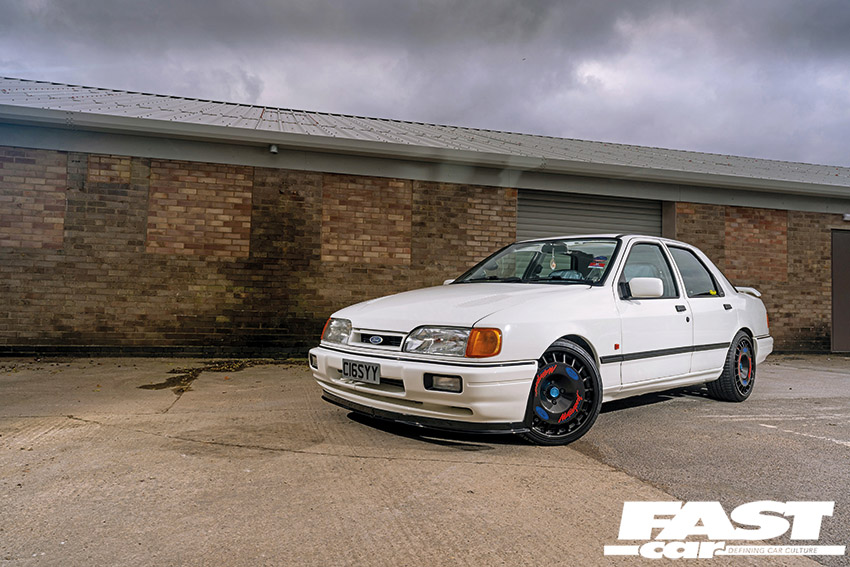 “I’ve been collecting parts for years; stuff like plastic trims, a new rear spoiler – I even managed to find some new headlights,” says Christian. The bodywork will be given some TLC where the odd marks have appeared, since it was resprayed seven years ago.

“The main areas to do are the underside and arches; the outside will just need a blow over,” Christian adds.

The only potential spanner in the works is in fact work because Christian is flat-out right now. On the one hand that’s great for funding his Blue Oval habit, but it does mean hardly any time to work on the car.

Fingers crossed he gets some free time soon, because we can’t wait to see the next evolution of this sweet tuned Sapphire RS Cosworth.