Initially bought for selling on, this bright tuned R53 Mini infected its owner and became a total obsession.

If your whole family drives Minis and your business is buying and selling them all day long, it takes a pretty special car to make a lasting impression and reserve a permanent place on the driveway. Brett Michael has bought, fixed, modified and sold enough R53 Minis to fill a multi-storey car park but this Liquid yellow example is his pride and joy, his keeper. So we thought it was worth taking a closer look at the ins and outs of the build and why it’s so special to him.

“Being honest, I only bought it to sell on for a profit,” Brett explains, “I found it on Facebook marketplace, and the plan was to buy it cheap, fix it up and sell it on”. The car had started out in life as a dealer demonstrator, then found ownership for the next 15 years with a mature lady who was selling up as it had started to develop a few little issues. “I messaged her on Facebook, bought it blind, arranged transport and started preparing to turn it around for sale, but all that changed when the transporter arrived at my house,” continues Brett with a laugh. 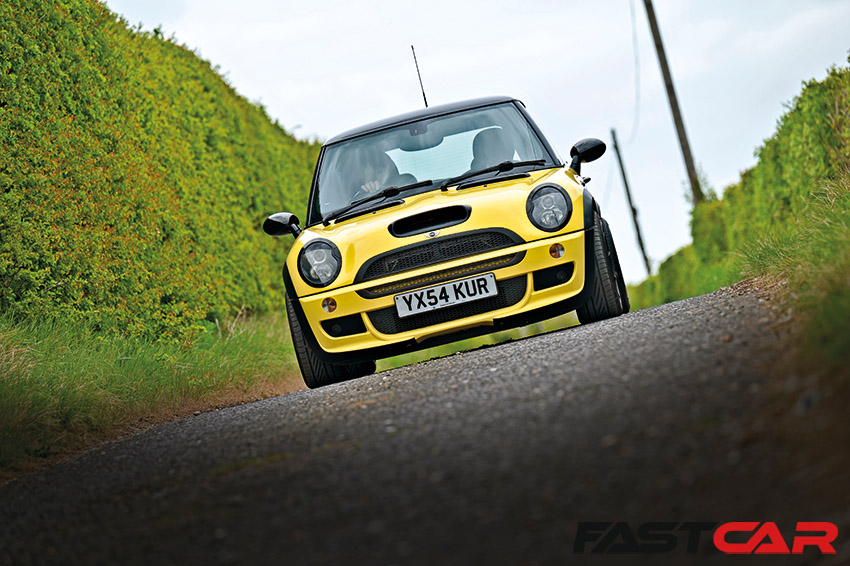 In the flesh, the car was mint, the previous owner having really cherished it with a full main dealer service history, all three keys and 86,000 miles on the clock. “Not just that,” adds Brett, “but seeing the colour in the sunlight made my brain go into overdrive thinking what I could do… It’s actually a very rare little beast, and I didn’t want anyone else having her!”

Having paid just £750 for the car, Brett could let his imagination (and wallet) go wild, deciding to tackle the engine mods first because, as he says, “power matters”. A Thumper TPR2 big-valve head forms the core of the extra performance, fitted with a Cat Cams 469 cam it frees up a shedload of mid- and top-end power, which is complemented by a 17% reduced pulley blowing through an Airtec intercooler. “I’ve had all of the different intercoolers over the years,” adds Brett, “and the Airtec works the best all-round, their expansion tank is also the best quality tank I’ve seen and comes with a sight window so checks are super fast and you don’t need to mess around with stubborn lids.” 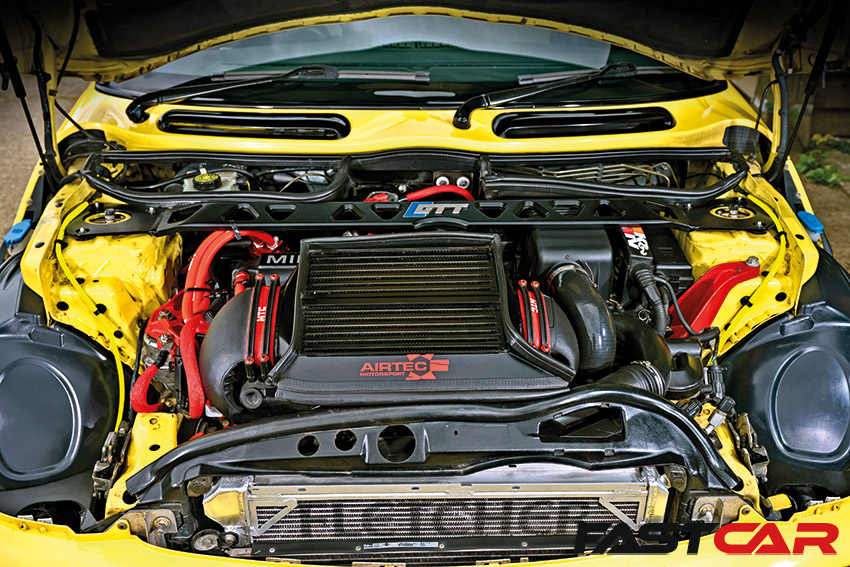 With a set of 550cc injectors fitted providing the fuel to match all of this extra air, Brett says the car has made 242hp at the wheels on the dyno which equates to around 280hp at the crank. He describes the end result as “pure nuttiness”, so it’s just as well he fitted a Quaife ATB LSD and R56 JCW Brembo brakes at the same time. “More power also means more time on the anchors,” says Brett, “and along with the suspension, these are hands down my favourite modification on the car. If you think an R53 is a go-kart, put good brakes and suspension on, and you’ll think it’s an F1 car!” 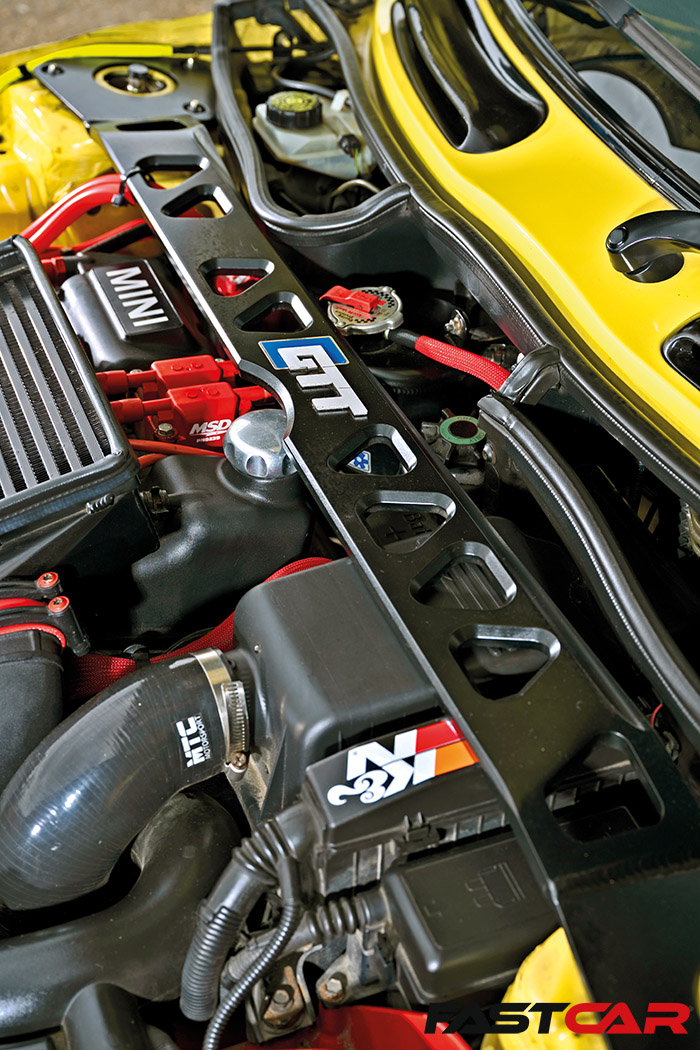 With regards to the suspension, Brett has tried many different makes and setups on R53s and R50s, and he is a big fan of BC Racing coilovers. “BC Racing stuff seems to be just right,” he continues, “the level of adjustment and the ride quality is brilliant for our B roads, especially as I’ve set the dampers to almost full soft.” This is quite different to many owners who slam their car and dial everything up to maximum stiffness, because race car, but as Brett says, “Setting a Mini a bit softer gives almost a factory feel but without any roll.” He complemented the subtle stiffening with a full set of Powerflex bushes, alongside GTT strut braces and adjustable suspension arms. 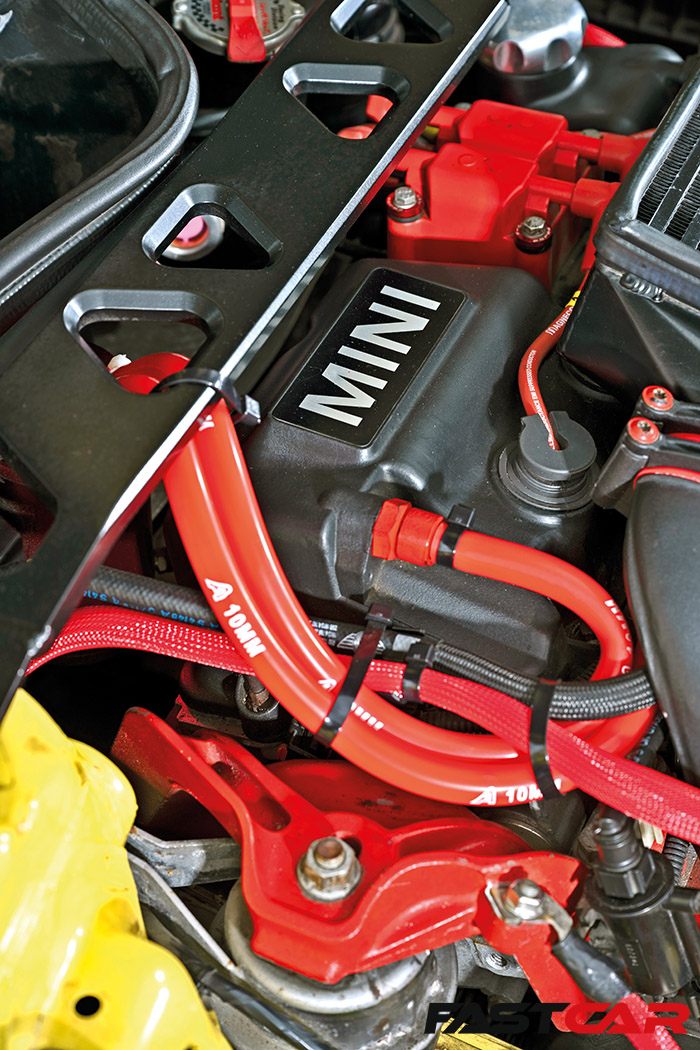 The latter haven’t been set too aggressively but needed a little bit of adjusting to get the Japan Racing wheels sat nicely in the arches. Measuring over 8” wide, Brett then also added 20mm spacers to the rear and gave it a mild stretched style by fitting them up with 215-section tyres. “I love the concave look,” Brett adds with a smile, “I’m also eyeing up some Autostar Chaser rims as they’re a concave six-spoke wheel which I think would really suit the tuned R53 Mini.”

Certainly, those concave JR rims give the Mini a purposeful stance and tie in very nicely with the yellow and black colour theme dashed around the rest of the car and its exterior mods. 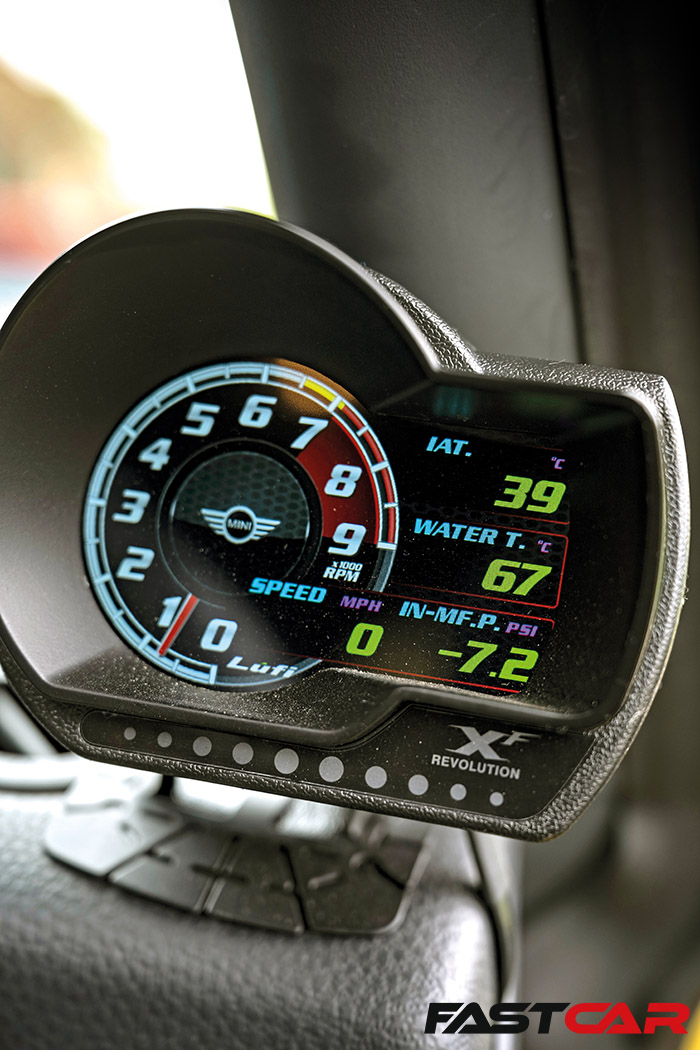 “Actually, I haven’t done too much to the outside,” Brett comments, “with the Aero kit from the factory, she was already a saucy lady I just put her ‘going out face’ on!” He was keen on the ‘bumblebee’ black and yellow look, but without going too over the top with bolt-on parts. Up front is a larger bonnet scoop finished in black, which complements the black ‘Joey’d’ front headlights with de-chromed surrounds. The de-chroming continues around the rest of the car courtesy of KillAllChrome’s beltline kit, and a set of smoked rear LED lights, plus Orranje’s halo product, the G-Wing, turn the rear end from cutesy to purposeful with just a day’s spannering. The cherry on the cake is a set of LEAP rear bumper inserts, which as Brett exclaims, “Damn, they are expensive, but they’re totally worth it for the looks.” A few carbon fibre parts are dotted around the rest of the exterior, including genuine JCW items, and this theme continues inside the cockpit. 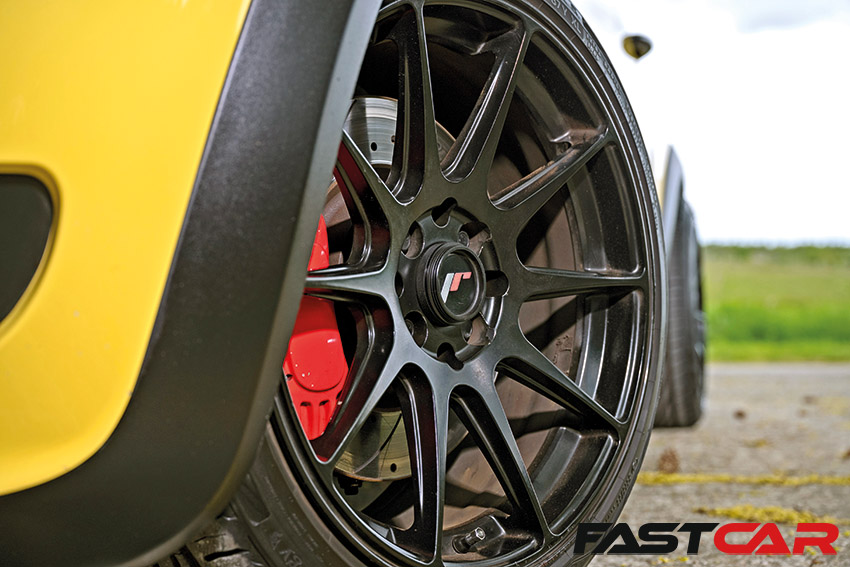 “I’m actually not a fan of the JCW,” says Brett, “but they do have some nice carbon parts such as the gear knob and handbrake lever, and I had a few lying around in the garage, so it would have been rude not to fit them.” The stand-out mod for driver and passenger, however, are the Recaro seats, which, again, Brett settled on after trying every other seating option you can think of. “I’ve had the standard seats, the JCW seats and no seat is as comfortable or looks as good as the Recaros, it’s that simple” he states, “and it transforms the driving experience – there isn’t another car I can now think of that is more fun on a B road.” 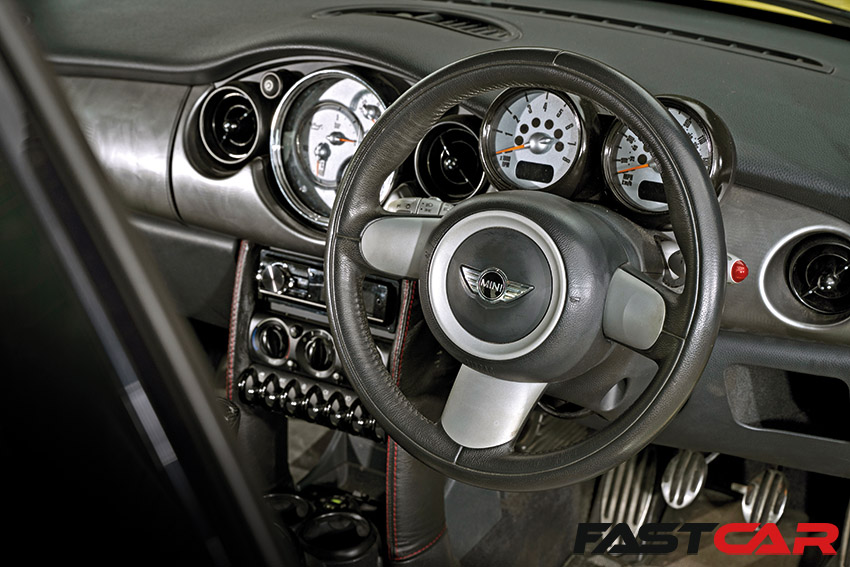 And that’s a great way to sum up this tuned R53 Mini – fun. Not only is it a hoot behind the wheel, but bystanders seem to be genuinely uplifted by this buzzy bee. “People stop and point as I drive by,” Brett says enthusiastically, “I remember a little girl tugging on her mum’s dress and pointing, saying ‘Look mummy, a yellow Mini,’ that really made me smile.” And it seems this bundle of joy is set to stay for the very long term, as Brett is genuinely considering an electric conversion. “Electric is the future,” he reasons. “Sure, I’m a big petrolhead, but the torque from electric power is like nothing else, and it’s much better for the planet, with far fewer moving parts which means less servicing and things to go wrong… winner winner, chicken dinner as they say!” Until he has fully researched how to keep the weight down of an electric conversion, however, and therefore retain the R53’s legendary handling characteristics, he will continue to enjoy the sweet sound of the supercharger whine and bringing a bit more bright yellow sunshine to the British public. 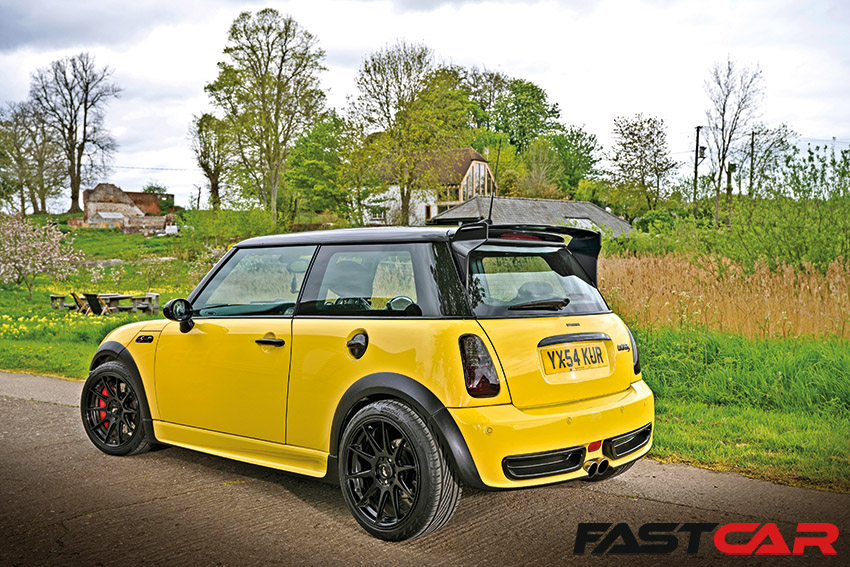