When James Hibbert swapped his R34 GT-R for its lesser-powered GT-T sibling, people thought he’d lost his mind. But there was definitely method in his madness as his tuned Nissan Skyline R34 GT-T will demonstrate.

When it comes to cars, there’s a very definite hierarchy to manufacturers’ model line ups. At the bottom of the ladder is usually the smaller, lower-priced models, whose reduced costs are in line with their sparse levels of performance and specification. At the top are the luxury and high performance models, the halo cars that drip with power, technology and desirability. As petrolheads who see cars as more than just simple modes of transportation, and who value the experience and thrill of driving and ownership as much as the practical advantages, it’s only natural that we covet the models that sit at the highest echelons of those ladders. They provide not only the adrenaline kick of performance and the satisfaction of style, but also endow their owner with a certain unspoken status too – an element that can get lost on some people, but is crucial to a car nut. In fact, so important is this standing within automotive circles, that it goes way beyond the differences between the varying marques and models and can come down to just a handful of letters…

“For anyone into Japanese cars the GT-R badge is the stuff of legend,” says 30-year-old HGV driver James Hibbert. “For many of us, any Nissan Skyline model that features those three letters on its bootlid falls under the category of our dream car, with people gladly willing to give up various essential body parts to own one, myself included.” 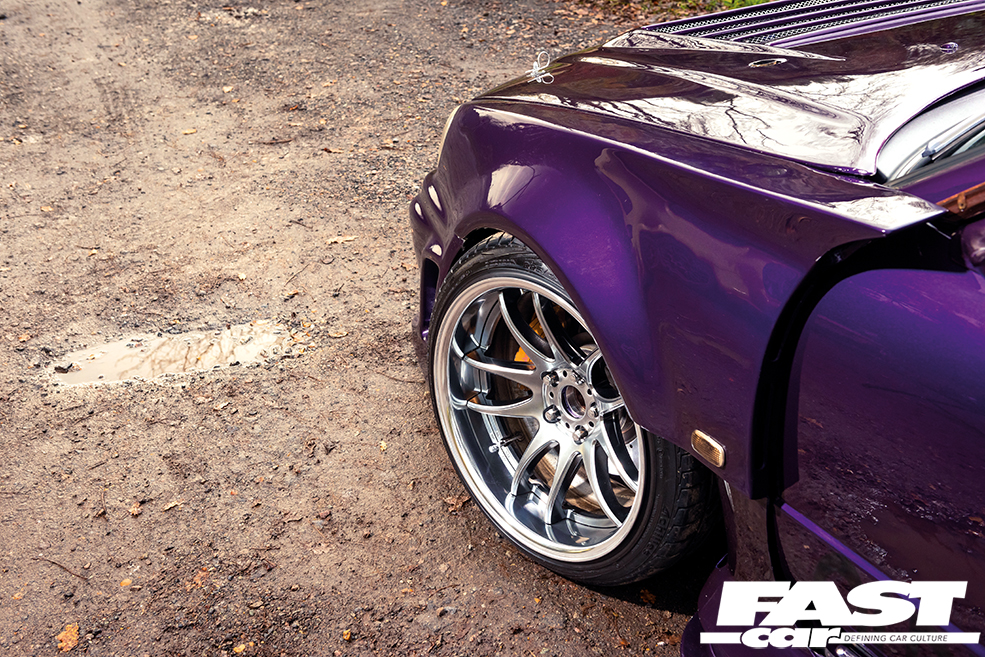 So when James actually managed to make his dream a reality by purchasing an R34 Nissan Skyline GT-R – while keeping all his limbs intact, too – why did he soon sell it in order to buy the GT-R’s poor relative; the lower-powered, less revered R34 GT-T?

“People must’ve thought I was going crazy,” he laughs. “But as good as the GT-R was, I just started to miss the fun of rear-wheel drive, and drifting in particular.”

Since owning an EP3 Civic Type R many years ago, all of James’s cars have been rear-wheel drive, with various Nissan S15s, a Lexus GS300 and an NA Supra making up his enviable back catalogue and cementing his addiction to steering from the rear.

“The other issue was the value of the GT-R and the attention it caused,” James sighs. “It meant that I was always wary of driving it on the limit or where I was parking it, as I was constantly concerned about it getting damaged or stolen.” 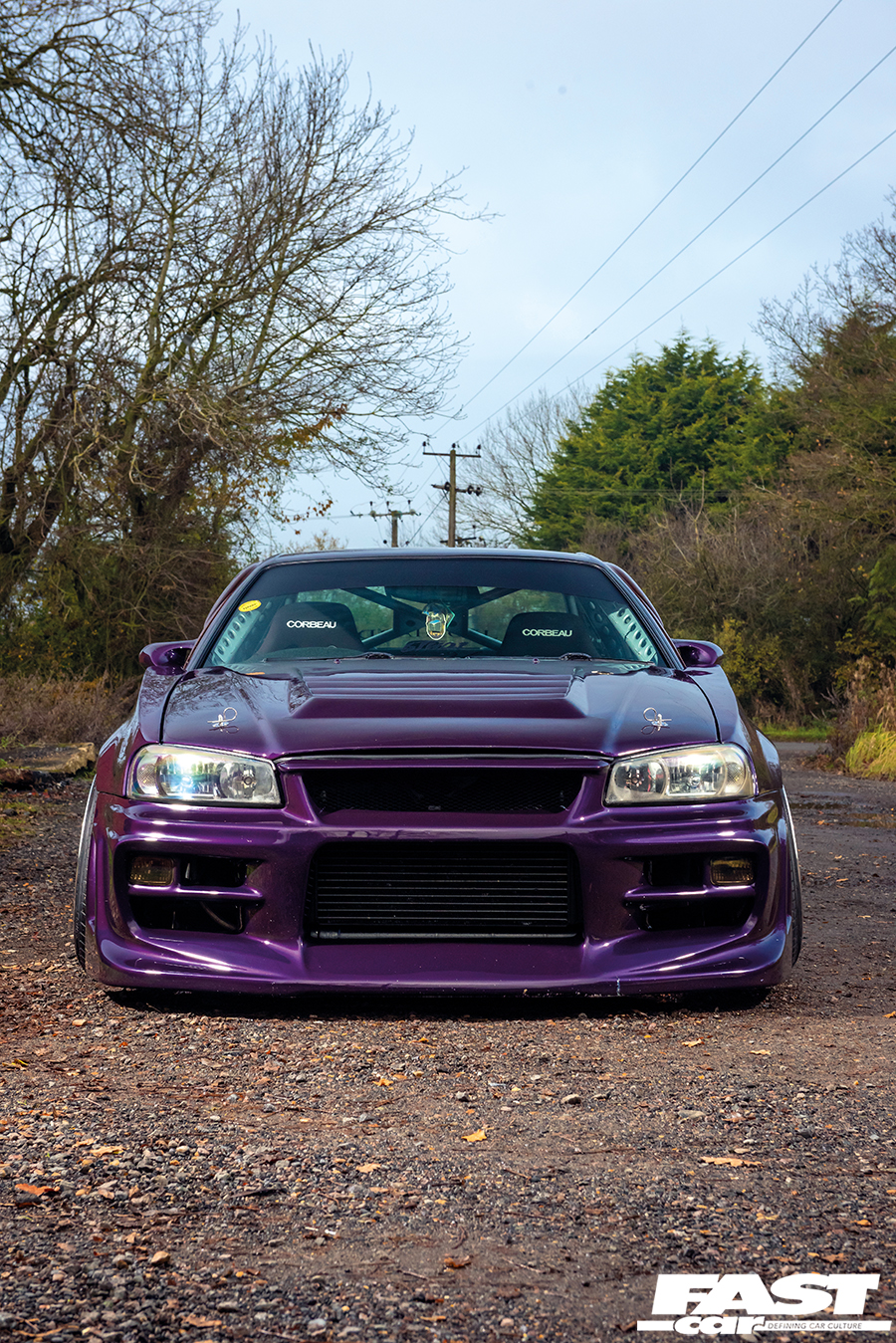 And so, combined with his need to get his sideways-sliding fix, James had an epiphany of what his next move should be, and started looking for a rear-wheel drive R34 Skyline GT-T as a replacement.

The R34 GT-T is Nissan’s next rung down the ladder after the range-topping GT-R. Featuring a 276bhp 2.5-litre single turbo RB25DET NEO, rather than the legendary twin-turbo’d 2.6-litre RB26DETT of its bigger brother (claimed to produce 278bhp as per the Japanese manufacturer’s gentleman’s agreement at the time, but actually making nearer 330bhp), it’s certainly no slouch, but the lack of the iconic swollen arches and the legendary ATTESA E-TS four-wheel drive system housed within, plus the small matter of the GT-R’s racing pedigree, means the GT-T will never be as revered as its stablemate, but to James, that was part of the appeal.

“GT-T’s may not look as tough as the brawny GT-Rs and don’t have the same potential to be tuned, but aside from the fact they’re rear-wheel drive (which is actually a bonus in my book) they’re actually not that different really,” reckons James. “And when you consider that you can get a mint condition GT-T for less than a quarter of the price of a GT-R these days, that leaves you with plenty of cash to tune and modify one to your preferred specification, which was exactly what I had in mind…” 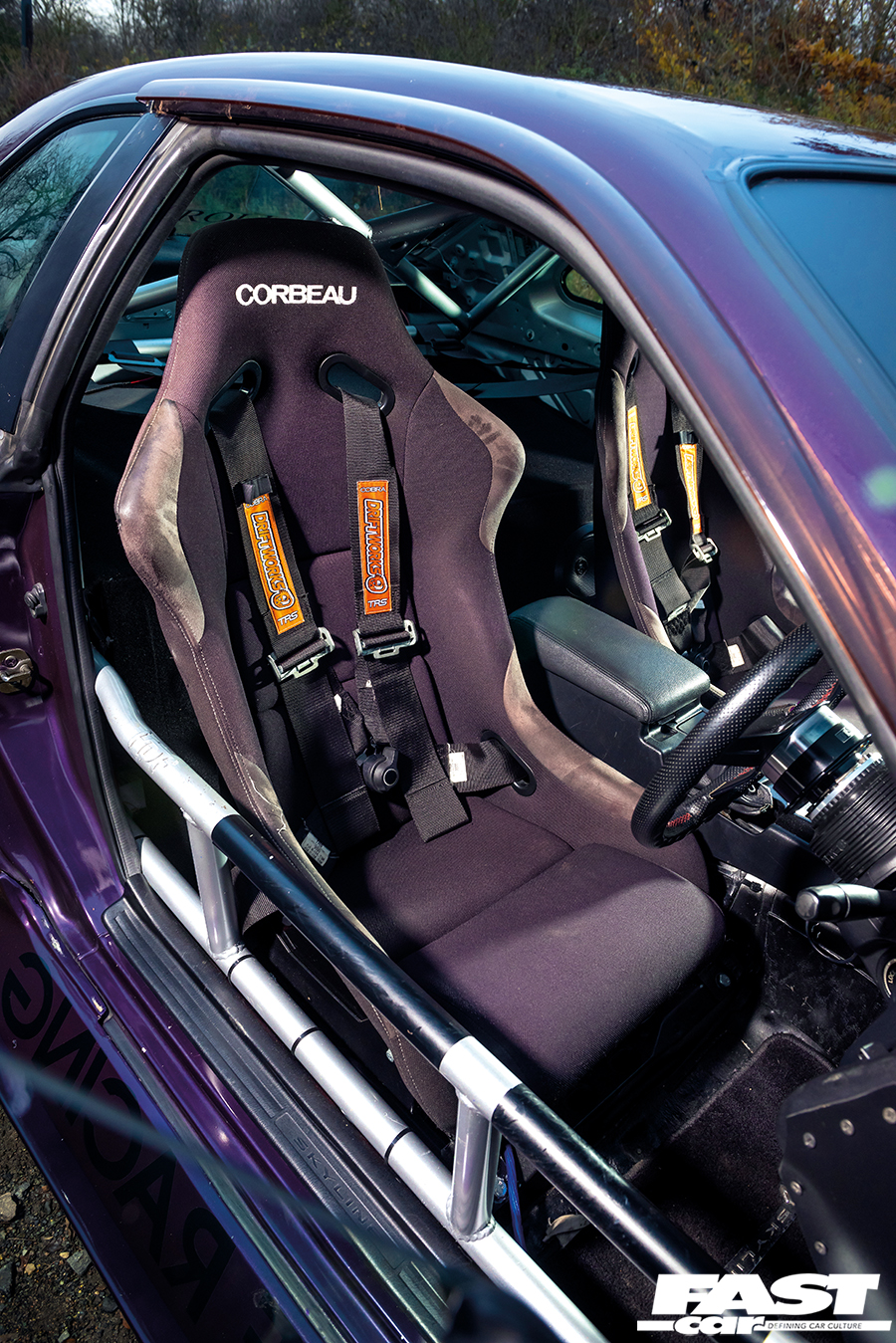 James began his search by putting up a post on social media to see if there were any GT-T owners who wanted to make the jump to GT-R ownership and were willing to work out a trade. Luckily, he didn’t have to wait long for a suitable candidate to arise.

“I was contacted by a guy with a GT-T with a full Tommykaira bodykit and accessories,” James remembers. “It had really low mileage and was immaculate!”

As well as the rare bodykit, the tuned Nissan Skyline R34 GT-R came with a host of other tasty additions including an HKS GTRS Pro turbo, a Z32 MAF, Sard injectors and fuel pressure regulator, a GReddy radiator and intercooler and an A’PEXi Power FC.

“It was making around 500bhp,” James says. “Which, along with a set of BC Racing coilovers, an uprated ORC twin-plate clutch and bigger R34 GT-R Brembo brakes, made it a real weapon on the road. In fact it felt much quicker than my stage one tuned GT-R that was running around 380bhp.” 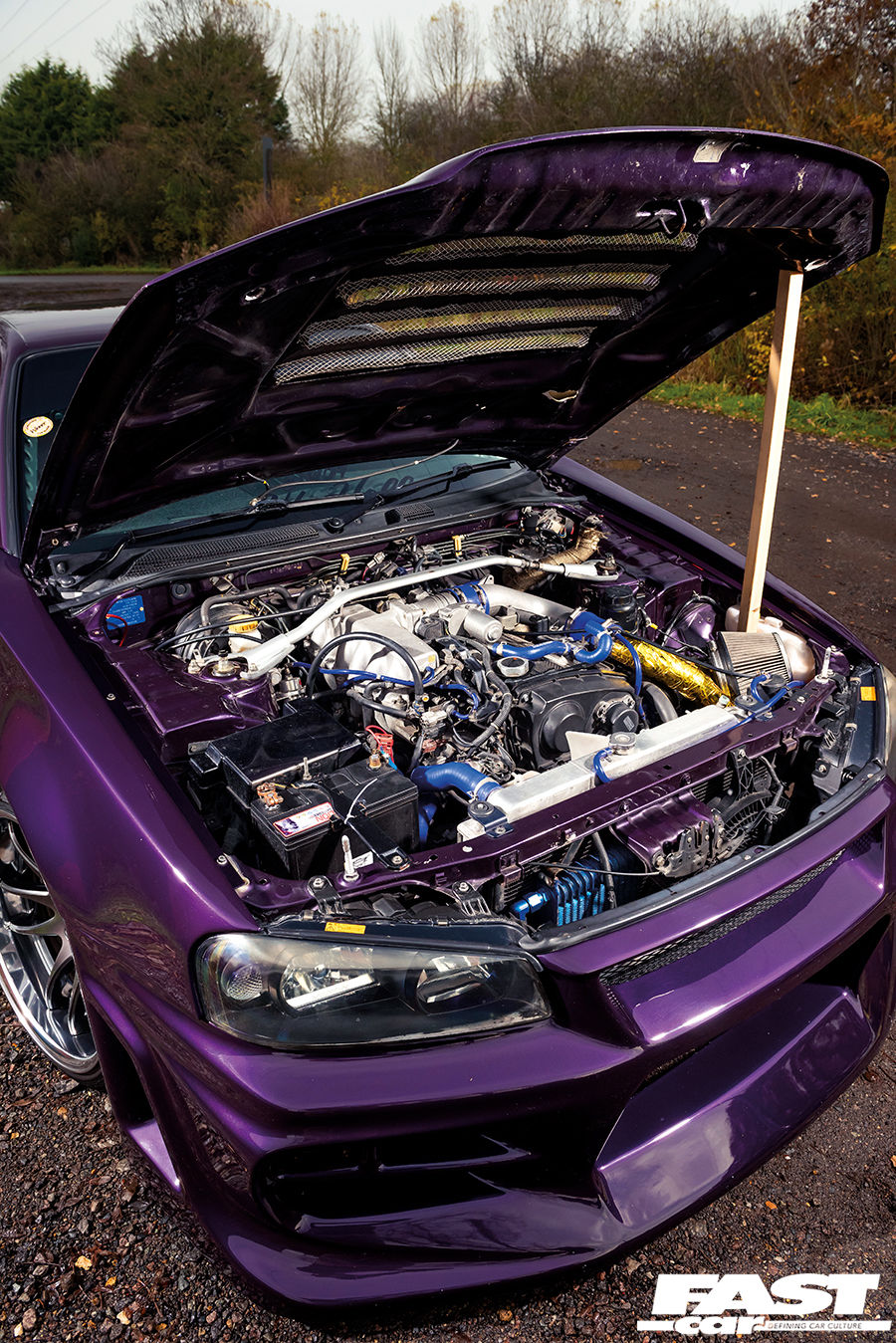 So after some friendly negotiations the pair finally did the swap on Christmas Eve, 2015, with James receiving an extra £18k his way, which just goes to show the price difference that occurs by moving that third letter of the badge just two positions along the alphabet.

“It felt great to have the power going to the rear wheels again, so I was happy with the deal,” James beams. “But even so, I wasted no time in adding my own touches.”

For starters it was the bodywork that received James’s undivided attention, as, even though it was genuine, he wasn’t keen on the look of the Tommykaira kit, so he sought to replace it with body panels bought from Loughborough-based body-styling supremos EP Racing.

“I’ve known EP’s bossman Leon Chan for years and he’s always been a great help with my project cars,” says James. “So when I removed the Tommykaira parts and sold them on – including the gearknob which sold for £300 on its own! – I had a nice pot of cash to spend on the GT-T to get it looking how I wanted it.” 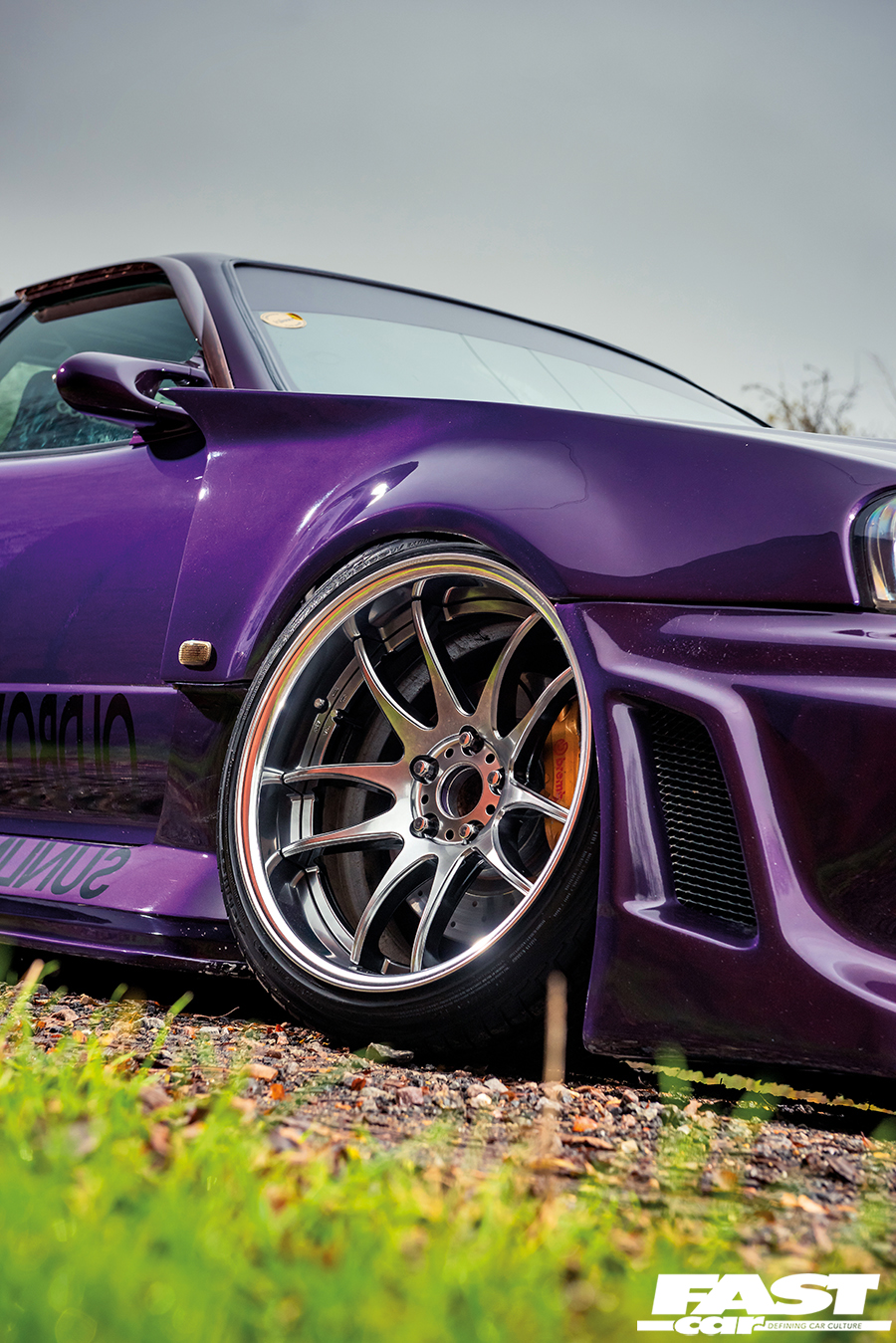 As anyone who’s really into their Skyline’s will likely tell you, the Z-Tune is the ultimate R34, but their rarity and astronomical price tag means few people are ever going to be able to own one, so James decided to do the next best thing and bought a replica bodykit, so at least his car could look like one.

“The kit was fitted by a friend of mine who owns a bodyshop in Chippenham called Desire Motor Factory,” says James. “He also tubbed the arches to allow more clearance for wider wheels, before respraying the car in a custom purple paint.”

With the body-styling sorted James swapped out the obscure 18in Sqobs wheels for a set of highly-concaved 7Twenty Style 46 split five-spokes and installed a HICAS lock-out bar and Kaaz two-way limited slip diff to ensure the rear wheels could be lit up on demand.

At this point in the build, James was happy to just kick back and enjoy his creation that combined the looks of his ultimate Skyline with the tail-happy handling attributes of his beloved S-bodies. 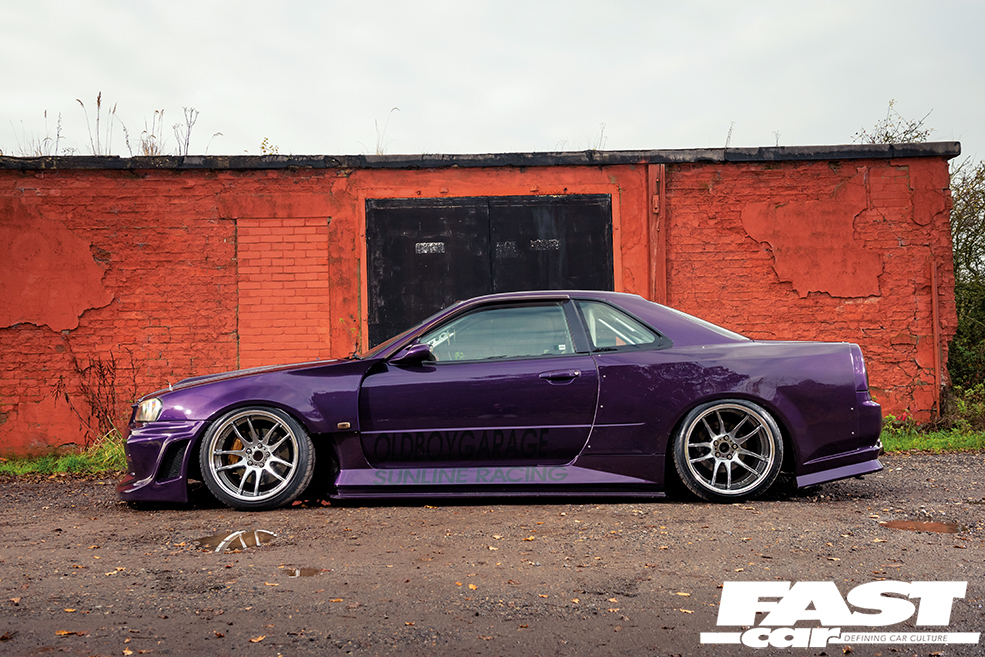 “It was great to get back into drifting again and the tuned Nissan Skyline R34 GT-T looked great, but I can never stop tinkering with things,” he grins. “So it wasn’t long before I’d added a big Japspeed GT rear wing and changed the wheels to a set of 19in Weds Kranze Cerberus splits with a 6.5in rear dish.”

Such is James’s addiction to alteration, however, that both of these mods were relatively short-lived, with the spoiler being removed and the wheels swapped again for a set of 18in Work Emotion CR Kiwamis. But that wasn’t all…

“I like to run the car low, but it can make it impractical,” James concedes. “So I invested in a set of Stance Parts air cups. These trick bits of kit are like mini air-bags that sit on top of your coilovers and are fed by a small air tank that allows you to raise the car a few inches when you need extra clearance, yet still retain the handling characteristics of coilovers.” 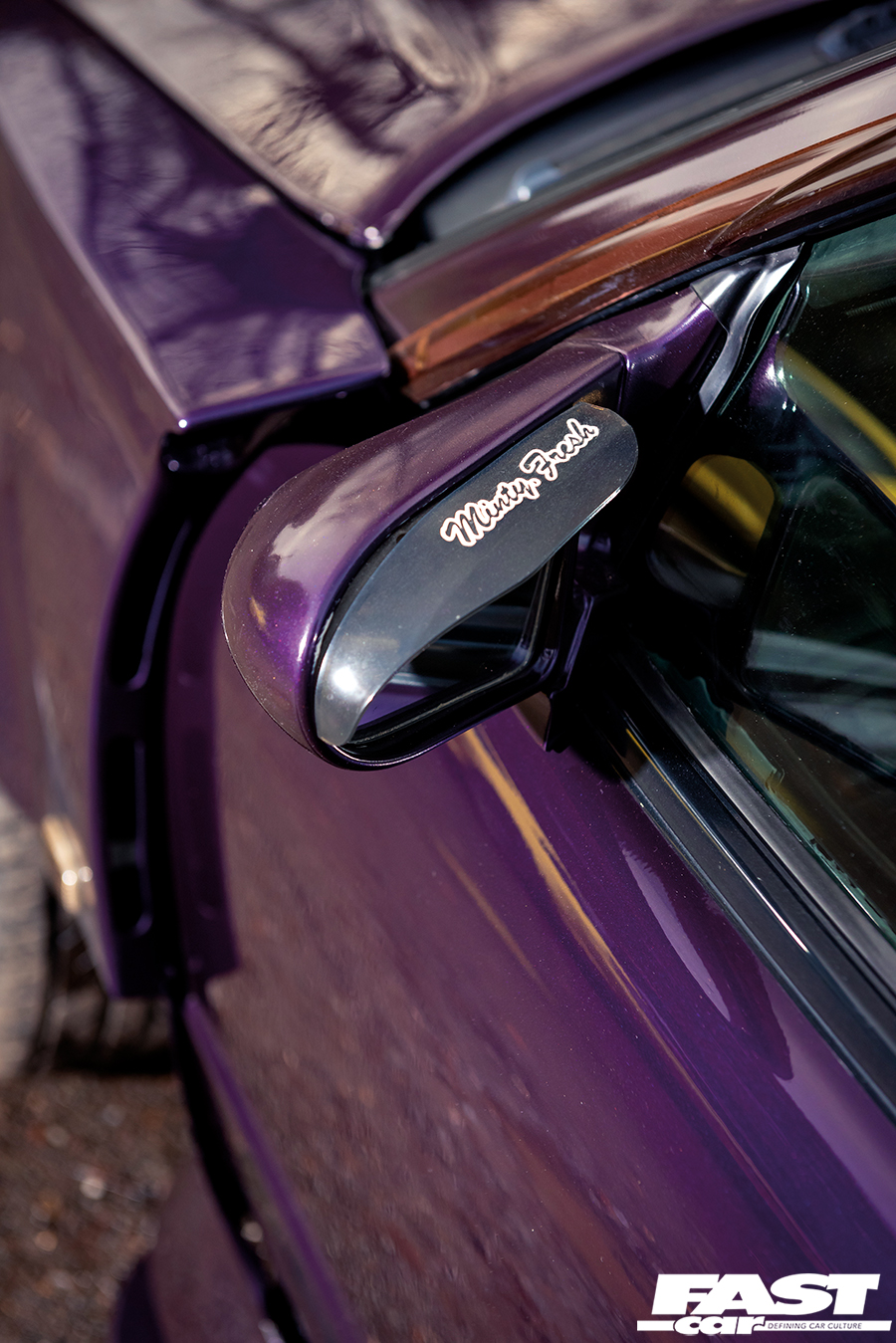 As well as the air cups, James decided to give the interior of the tuned Nissan Skyline R34 GT-T a shot of racecar chic by stripping it out, fitting a pair of Corbeau Clubman bucket seats and harnesses and having a comprehensive custom rollcage installed by HDF Motorsport in Petersfield.

“I really love my music so the rollcage has been designed to fit around my audio system,” highlights James, pointing out the Hertz door speakers and 10in Vibe subwoofer in a custom enclosure behind the bucket seats. “It’s a great sounding setup and pretty loud too, which it needs to be, if it’s to be heard over the exhaust system!” he chuckles.

Uninspired by the car’s previous setup, James needed added aural excitement from the GT-T so decided to install an external wastegate with a bonnet-exit screamer pipe and a straight-through exhaust system with shotgun-style tailpipes. 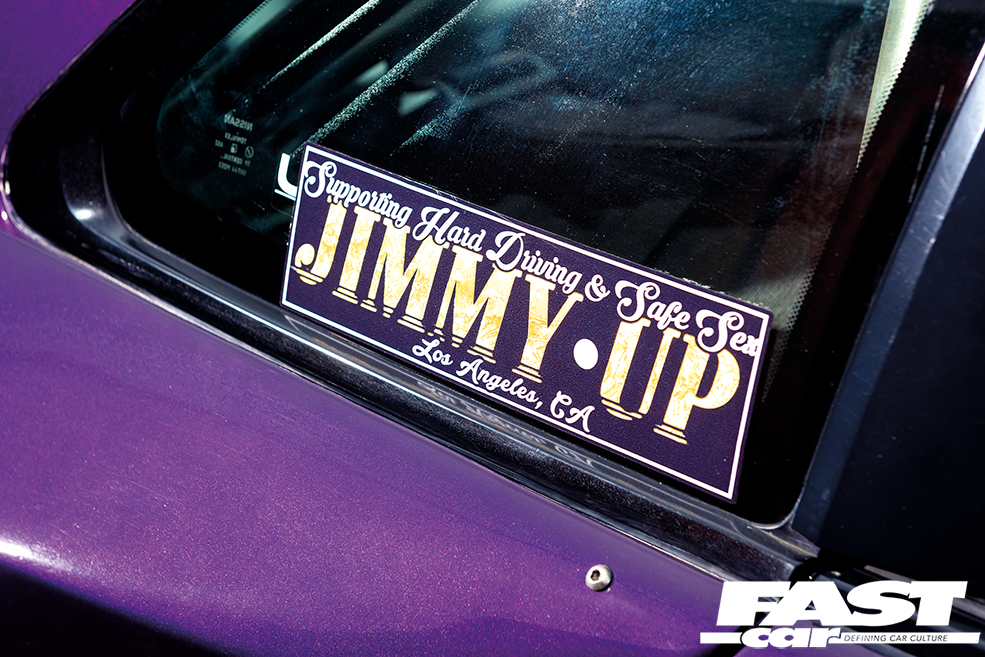 “It’s certainly a lot louder now and sounds epic when you let off the throttle and it spits flames up the windscreen,” he smiles. “Unfortunately when I removed the downpipe to fit the wastegate, I noticed the turbo’s turbine blades were damaged.”

This was all the excuse James needed to get the turbo rebuilt by forced induction experts Midland Turbo, while at the same time improving the fuelling and ignition with larger Sard injectors, an high-flow fuel pump and Splitfire coilpacks.

“Once the engine upgrades were installed I had the ECU re-mapped by Tom Hudson at tuning gurus, Fensport in Chatteris,” James reveals. “As far as I know, the car didn’t make any more power as such, but the delivery was night and day. The turbo spooled quicker and the torque in the midrange was brutal. It’s a much quicker and more fun car to drive as a result, which is exactly why people shouldn’t get hung up on outright power figures.”

Now, for most people, this would be the end of the story, but not for James and his tuned Nissan Skyline R34 GT-T.

“I got a call from Leon at EP Racing who said he had just taken delivery of a new Sunline Racing style kit for the R34,” recalls James. “It’s a really aggressive looking kit with wide arches and was the first of its kind in Europe… I just couldn’t resist!” 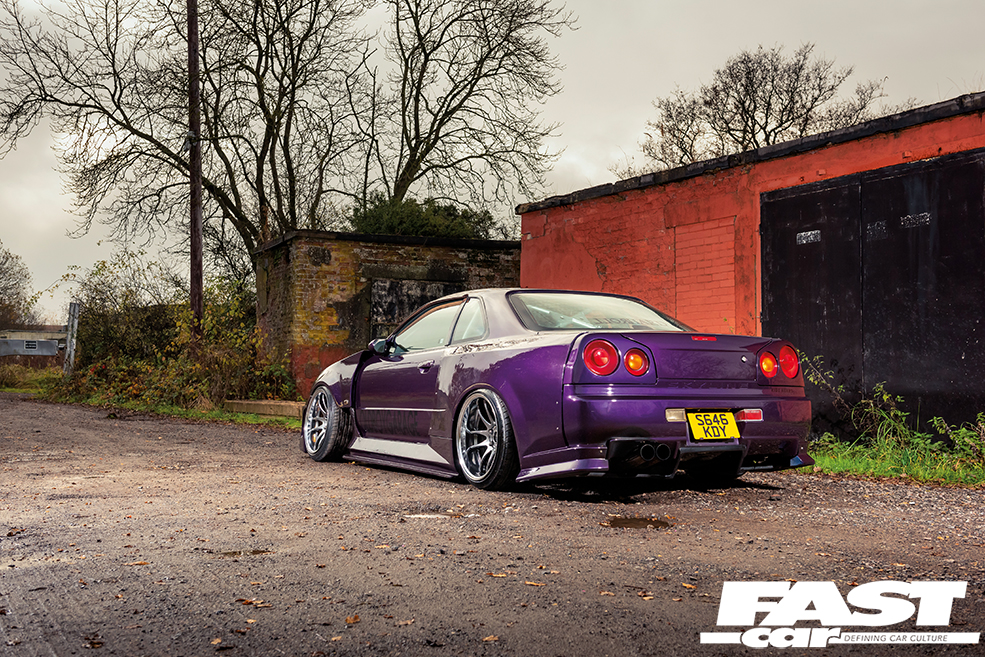 James sent the kit, along with a JUN-style front bumper, to be painted before installing it himself on his driveway the day before he was due to attend the Player’s Classic show at Goodwood racecourse.

“‘It was a bit of a race against time to get it on, but it fitted really well in the end and I made the show the next day, where it’s safe to say, it got a big reaction!” he beams. “I was well chuffed with how it looked, but it’s even better now I’ve changed the rims to these 18in Work Emotion CR-2Ps.”

So surely this is end of the road for James’s fettling fetish? Well, not quite, as he has his sights set on a forged engine with top mount turbo and a tucked bay! But that’ll have to wait until another day. For now though, James can be content with what he has. This tuned Nissan Skyline R34 GT-T may not have an R at the end of its moniker, but by taking a step down in the Skyline hierarchy, he’s built a car that not only looks a million dollars, but puts a huge smile on his face every time he gets behind the wheel, and there’s nothing crazy about that!