Welcome to FC Throwback, where we take a look back at some of our favourite previous feature cars. This is Liberty Walk’s Kato-san’s tuned Nissan Skyline Kenmeri C110 from 2014…

A rumour has been spreading like wildfire through the backstreets of the Chubu region of Japan. Sightings suggest that a legendary mythical beast is back on the streets. Even the intimidating Bosozoku custom tuners are anxious to know more. Many have heard it, but few are yet to witness it first-hand. Well, boys and girls, we can reveal that the rumours are true – Kato-san’s very own Kenmeri Skyline (check out our Nissan Skyline ultimate guide) is back with a bang after being the latest car to undergo his game-changing transformation skills. 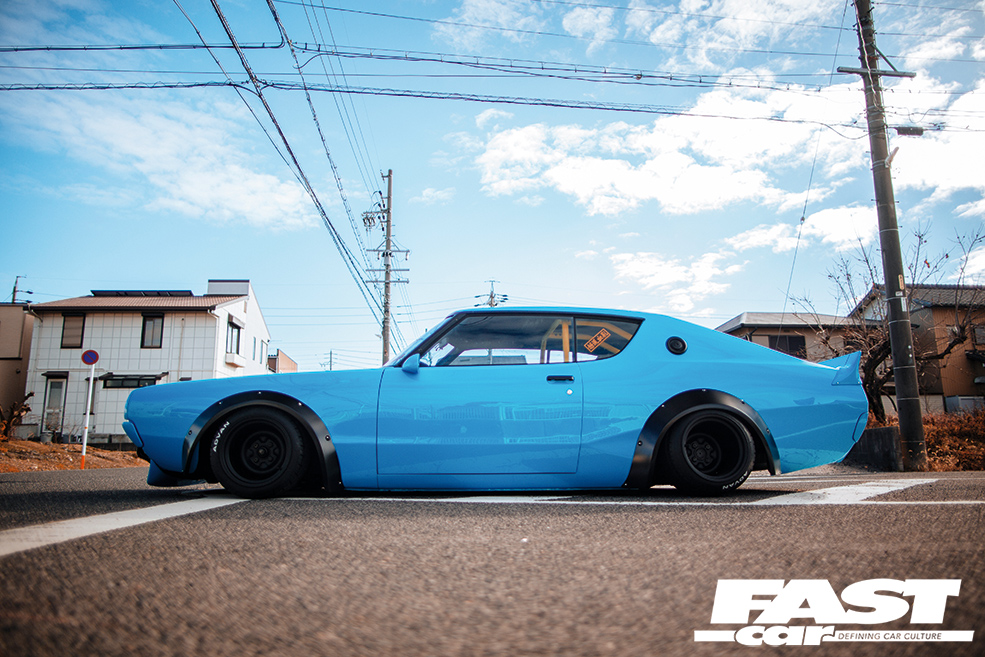 Rewind a couple of FC issues, and you might have caught our interview with Waturu Kato-san, the madman behind Liberty Walk (how could you forget it?!). Although that feature was dripping with crazy supercar exotica, a small piece of the conversation stuck in our heads. Kato-san fondly admitted his personal tuned Nissan Skyline Kenmeri was his most special car, and gave us an insight into what was to come, “It’s being redeveloped for 2014 – lower, wider and a new colour; I think you’re going to like it,” he said. 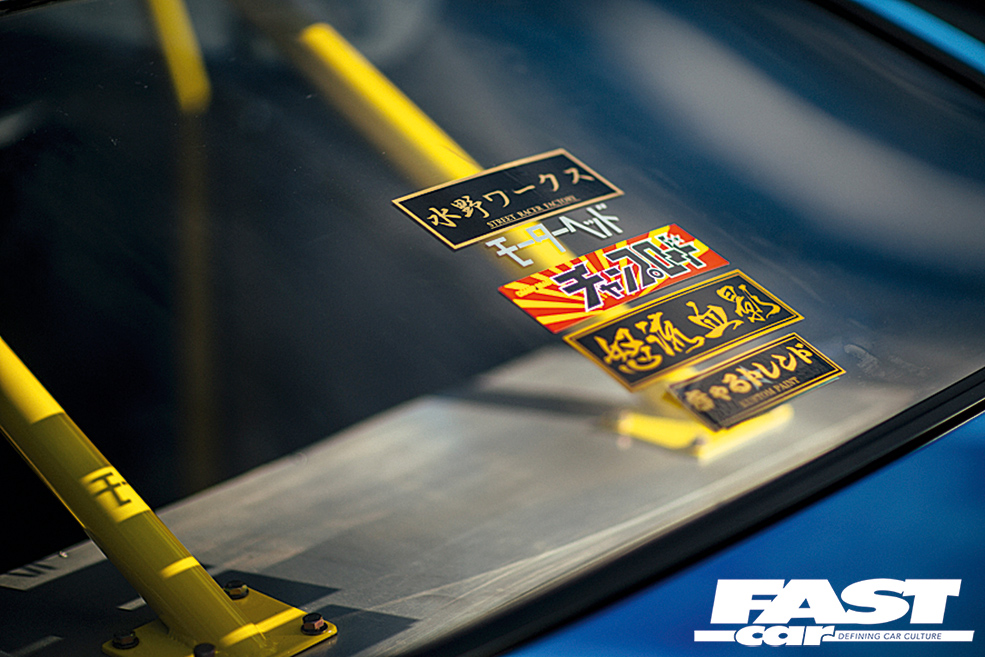 Since then, we haven’t quite managed to get the thought of Kato-san’s ’70s tuned Nissan Skyline Kenmeri out of our heads at FC Towers. What on earth would his bonkers style look like on a car like this? If you’re familiar with Mr Kato, you’ll know how enthusiastic he is when it comes to modding nice cars. Many an online photo shows him grinning madly, angle grinder in hand, ready to operate on another unassuming supercar with the air of a mad surgeon about him. His work on cars has always split opinions, and daring to mess with a beloved Kyusha Kai (classic car) will certainly stir a similar reaction. 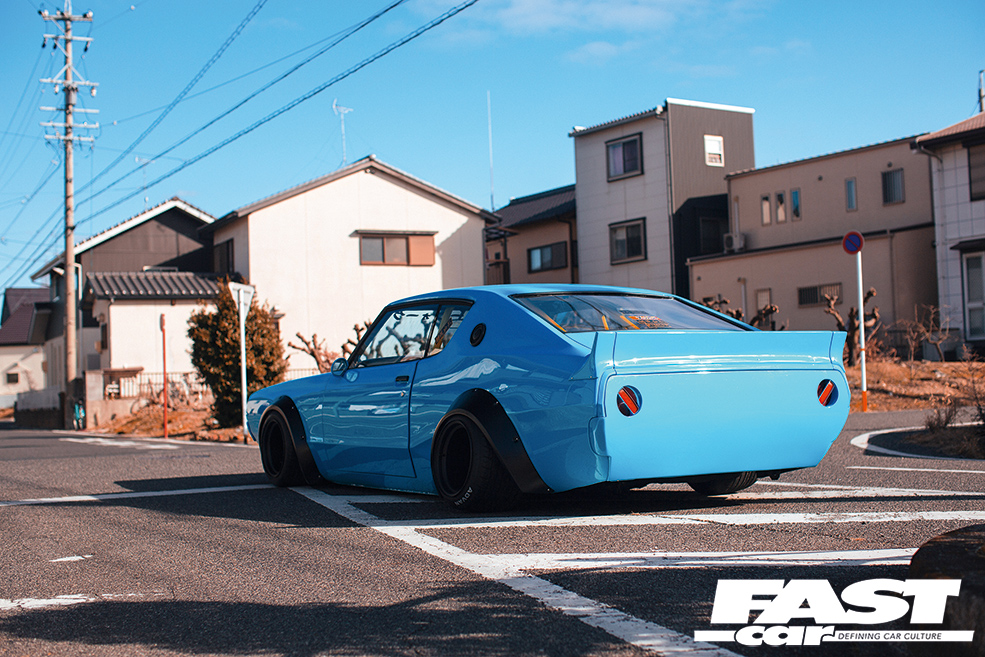 You may have already grabbed a sneak peek of the car at this year’s Tokyo Auto Salon, where it was proudly displayed amongst some of Kato-san’s finest work: ground-breaking Ferraris, Lambos and all other manner of exotic metal, modded to a style that is threatening to take over the world’s tuning scene very soon. The fact that this humble old Skyline managed to cause just as much of a stir with the punters as these beauties, however, is a testament to just how special this car is. 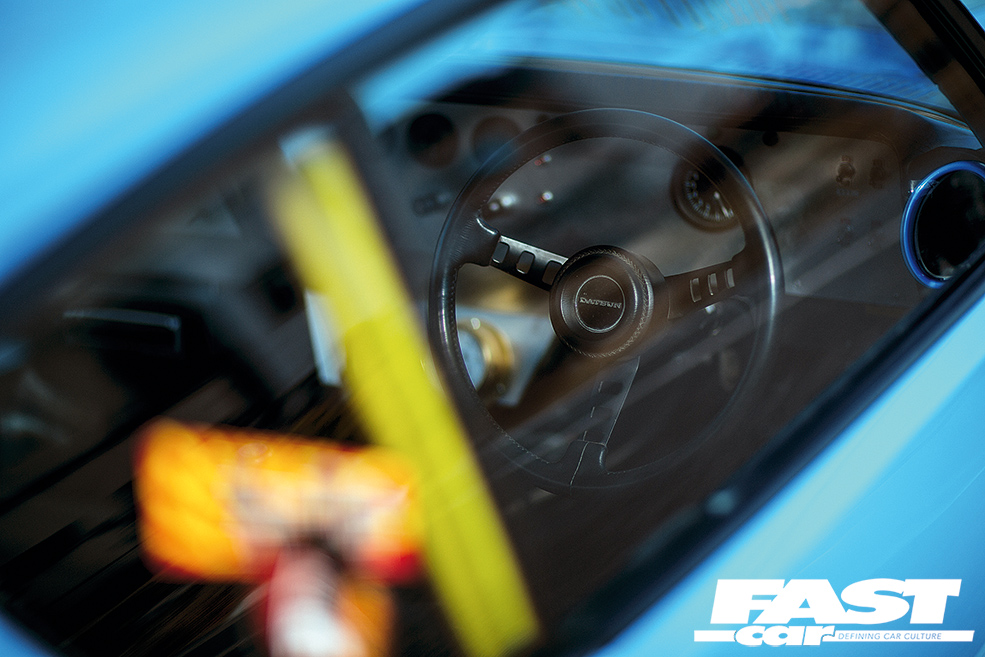 When you see this tuned Nissan Skyline Kenmeri in the flesh, the first thing that strikes you is the colour scheme. The fresh baby blue paint comes as a bit of a shock initially, but once your eyes have adjusted, you’ll realise that it only serves to enhance the sexy lines of this 2-door. Next, you’ll gawp at just how much wider this beast is than any other C110 Skyline out there. Kato’s LB Performance garage, with the help of the legendary Mizuno Works, riveted on the widest arches they could find, and then banded some old-skool steelies to a ridiculous 13in girth on the rear to fill ‘em out nicely. ‘What about tyres?’ we hear you ask! We put this very question to the man himself, who jokingly explained that only some ex-racing Advan wheels were up to the job, fitting the old-school racer theme rather nicely we think! 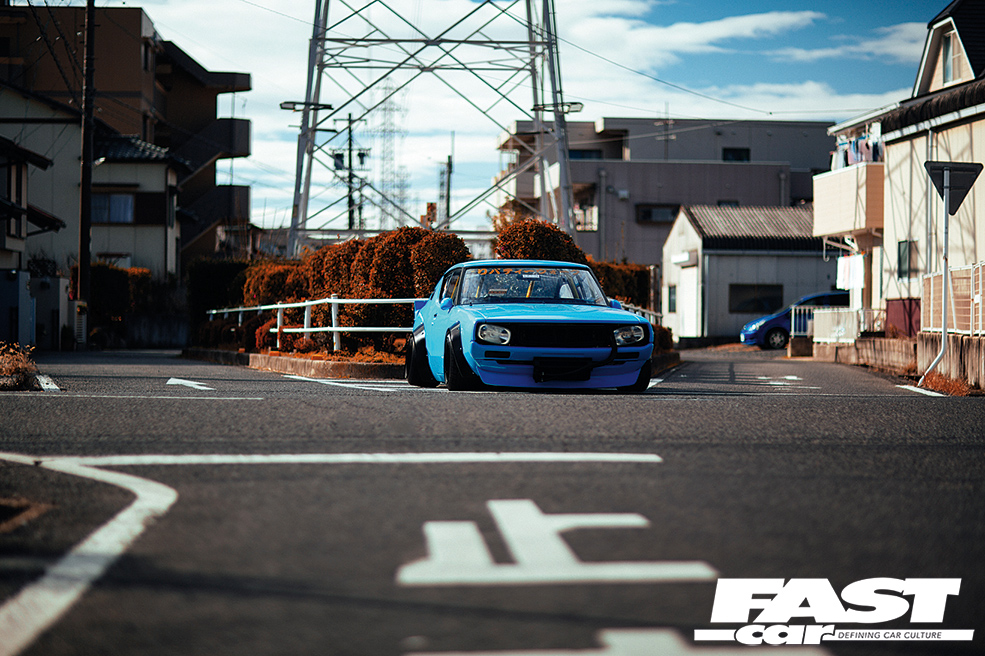 Most people who follow the Kaido classic Jap car scene like to keep their cars as original as possible, ‘preserving a piece of history’ or whatever they like to call it. Unsurprisingly, this mind-set was far too boring for Kato-san. As a keen member of the Bokosozu clan back in the day (a gang where the louder and more obnoxious, the better), he wanted the car he grew up with to feature this lairy style as much as possible. The unforgivingly smoothed exterior, kinked head and taillights and wildly-angled ducktail spoiler will certainly be about as offensive as receiving a one-finger salute for some of the classic car fans out there! 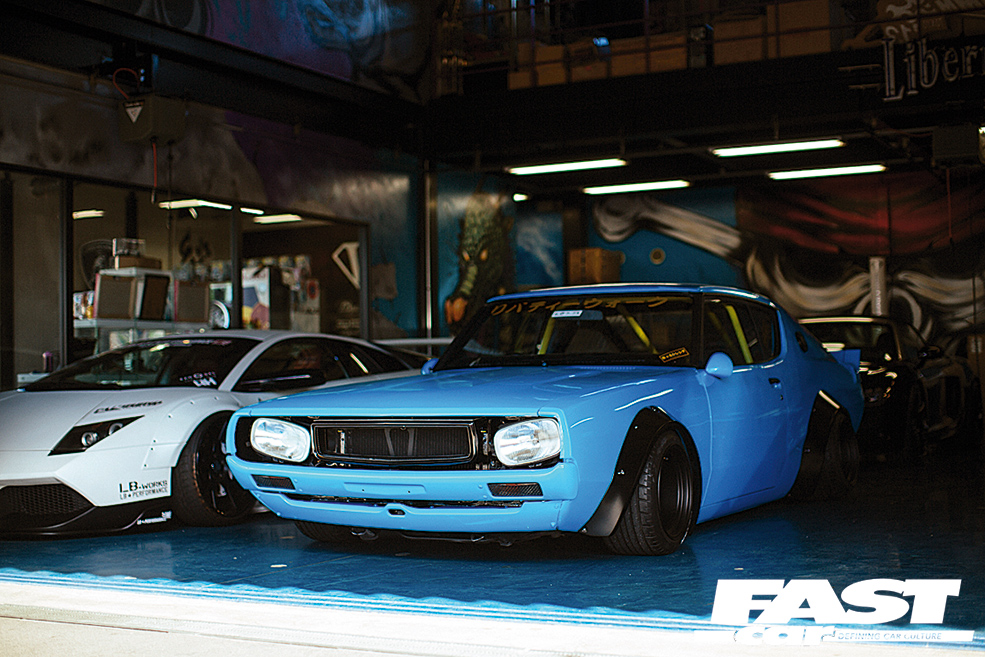 An external oil cooler hanging unforgivingly out of the bare front end is reminiscent of the classic Jap racers that were officially as cool as hell at the time, and even more so now. It also gives a clue to what’s lurking under the bonnet – an absolutely mint L28 lump on triple carbs, rebored by Mizuno Works. Kato-san estimates it’s kicking out anything up to 300bhp – enough to send this flyweight RWD coupe to infinity and beyond! Oh, and the car is as deafeningly loud as it looks thanks to a lack of exhaust – with just 5mm of static clearance down under, Kato-san has decided that an exhaust isn’t a priority! 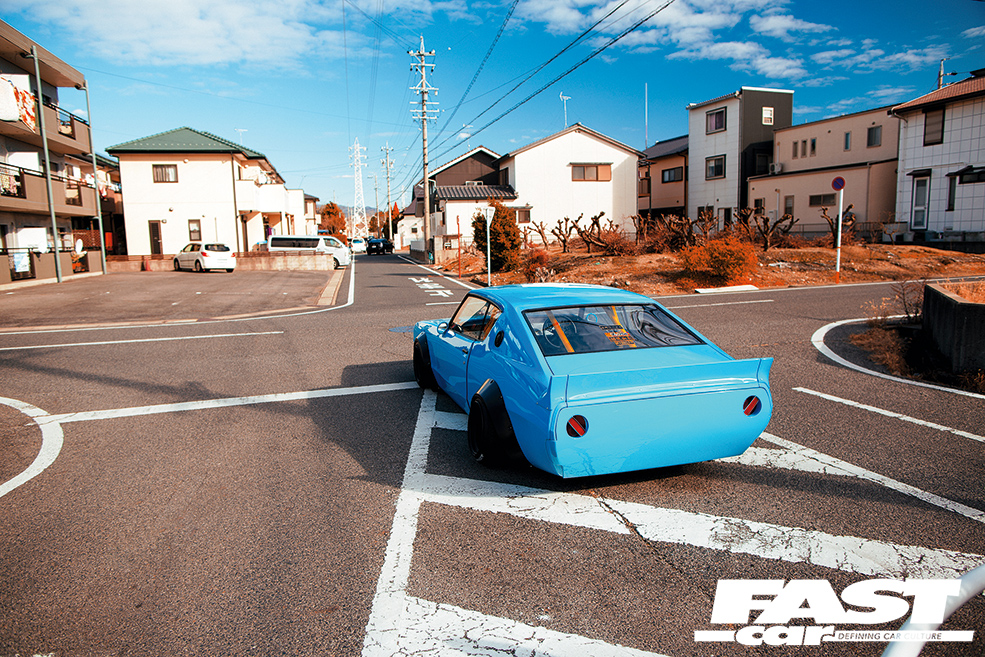 Open the door to find a beautiful ’70s-racer inspired interior staring back at you. The Datsun racing seats and steering wheel are about as rare as finding a unicorn covered in fifty pound notes down the back of the sofa, but Kato-san knew they were essential to complete the look. A wild yellow half-cage is the only modern touch to the internals, and the contrast works as perfectly as the rest of the car somehow manages to. 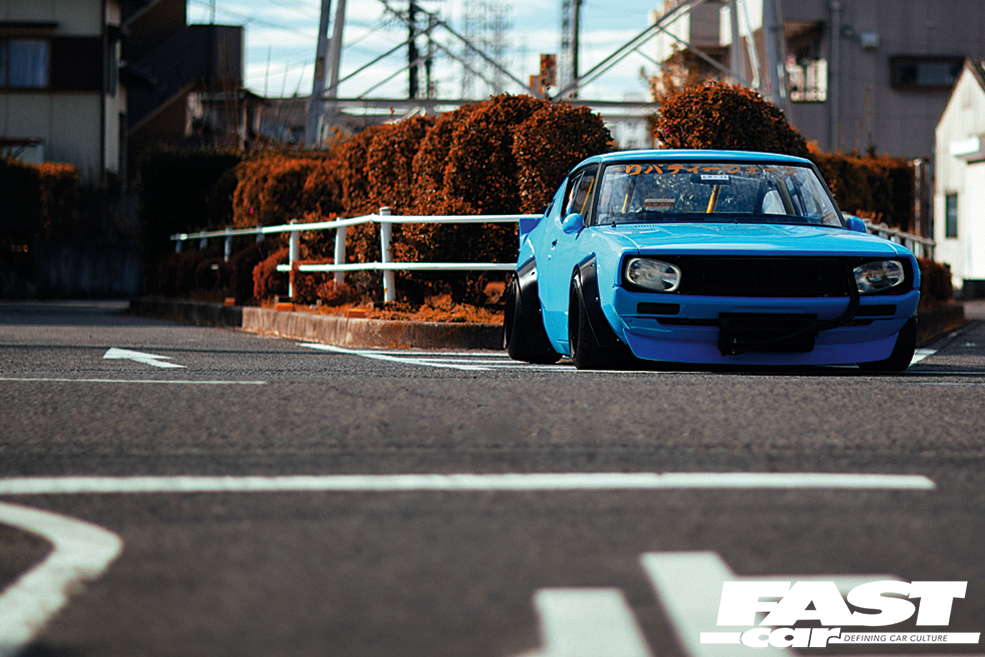 Kato-san’s personal motor is certainly a mish-mash of several different styles. Initially, it screams Liberty Walk, with its dustbin-dished rims and super-wide arches. But dig a little deeper to find a car that a whole lot of thought and lifelong passion has clearly been poured into. Kato-san is a proud ambassador of Yamato Damashi, or ‘The Japanese Spirit’, which he is successfully spreading across the global car scene. His no-nonsense attitude has ensured that Liberty Walk is changing the way we look at cars
for good.

What does Kenmeri mean?

Bizarrely, the ‘Kenmeri’ name that has become synonymous with the C110 Skylines actually comes from the combined names of the couple, Ken and Mary, who featured in Nissan’s TV adverts from 1972 to 1974. They were young, and loved tooling around in their 2000 GTX which captured the hearts of the Japanese public so much, that the car became known as the Kenmeri. It’s a bit like how everyone goes nuts over those bloody meerkats nowadays, only bigger.

Anyway, you may be asking why Ken and Mary weren’t rolling in a GT-R? Well, because of the 1970’s oil crisis, they had to show their green credentials. In fact, Nissan only actually made 197 GT-Rs over  seven months in 1972 and 1973 making them some of the most sought after classics ever – after that there wouldn’t be another GT-R for 16 years.