Don’t be fooled by the relatively mild-looking appearance of this tuned Nissan Skyline GT-R R34, because, while still road legal, it also is one of the fastest GT-Rs around Japan’s Tsukuba circuit.

Looks can be deceptive. Take nature for example. When it comes to choosing whether to touch, eat, or fight anything in the animal kingdom, it really pays to know your stuff before you get stuck in. What may look totally innocuous at first glance can turn out to be the deadliest, most ferocious mutherhubbard you could ever wish to meet when provoked. 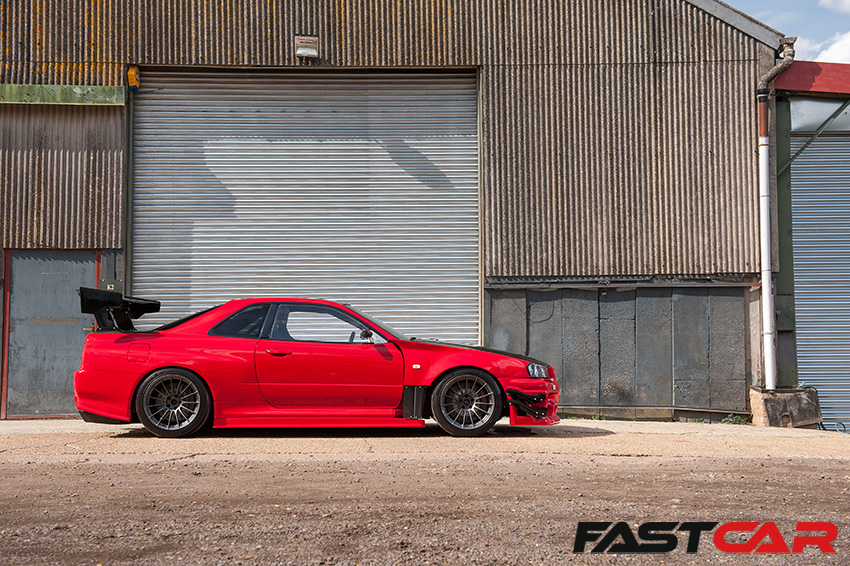 It might pay to take a closer look beyond the glossy red paintwork of the tuned Nissan Skyline GT-R R34 (check out our ultimate guide to the Skyline GT-R) you see here, as there is a lot more to the car than meets the eye…

Imported by Japanese import specialist, Harlow Jap Autos, the tuned Nissan Skyline R34 GT-R originally assembled by hardcore JDM racing shop Autech Tsukada, also known as ATTKD. Based in Nagano, ATTKD are well known throughout Japanese tuning circles as a firm focused on setting super-low lap times with every car they build. Previous projects have included one of the fastest naturally aspirated Nissan 350Zs in Japan, as well as a monstrous R32 GT-R racecar, built to dominate at Japan’s high speed Fuji Speedway circuit. But unlike their previous creations, which featured aggressive aero mods and were plastered in race graphics, the R34 was always destined to be a more subtle-looking machine – one that retained its fully road-legal status. 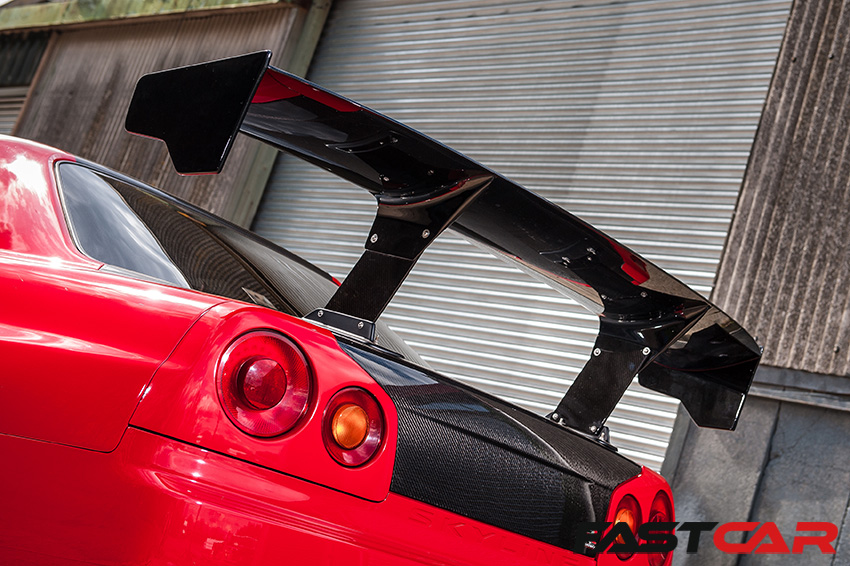 This time out, Fuji was not on the radar, but rather the smaller, tighter and more technical Tsukuba track, host to the popular Time Attack and Battle Evome events.

Tsukuba has become a track ensconced in tuner tradition. As one of the original tracks used for the first Super Lap and Tuner Battle competitions, it has become the default proving ground for Japanese tuning houses to come and test their metal against the clock. For decades now, the fastest cars in the Far East have migrated to the small Shimotsuma-based circuit to take on its tight turns with the dream of capturing the coveted lap record. The current record is held by Nobuteru Taniguchi and the Toyota 86 TRB-03 with a time of 49.44 seconds on slick. However, this is a full-on lightweight racer with bonkers aero and crazy power – its days of being able to drive on the road long forgotten. For street cars that can still ferry their owners to the supermarket as well as put in a searing lap time, anything under a minute is seriously fast. 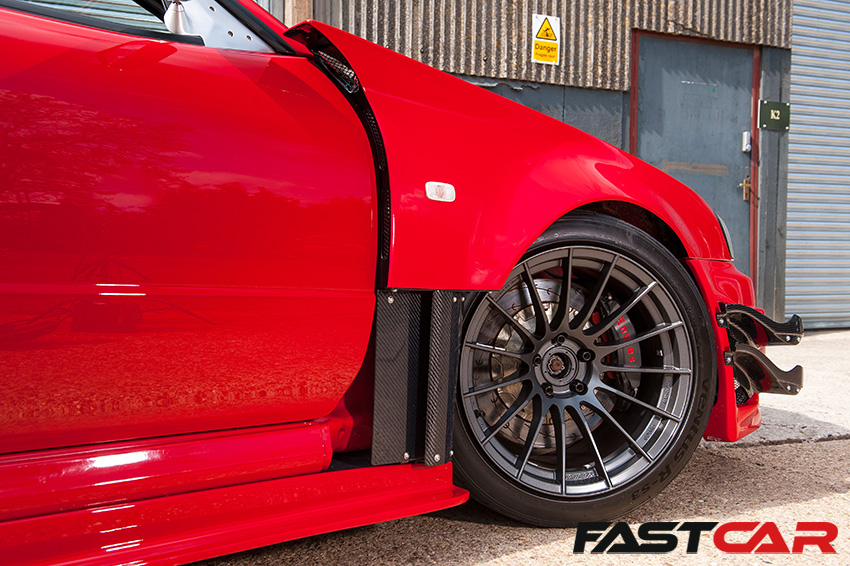 ‘The ATTKD GT-R is one of the fastest road-legal GT-R’s around Tsukuba, having put in a blistering lap time of just 56.9 seconds,’ says Osman (Ozz) Hussain, bossman of Harlow Jap Autos. ‘We’ve imported loads of quick cars over the years, from RX-7s to Evos and all manner of Skylines – including legends like the 1000bhp Drag R R33 from Top Secret – but in terms of a road legal track car, this has got to be one of the fastest GT-Rs we’ve ever brought over, and it has the lap time to prove it!’

And, just to put that lap time in perspective, a £125k R35 Nissan GT-R Nismo can only manage a 1min 1sec lap, which is the same as a Lamborghini Gallardo Superleggera. And to be capable of pulling out another four-seconds over these guys, you can see just how potent the ATTKD tuned Nissan Skyline GT-R R34 really is. 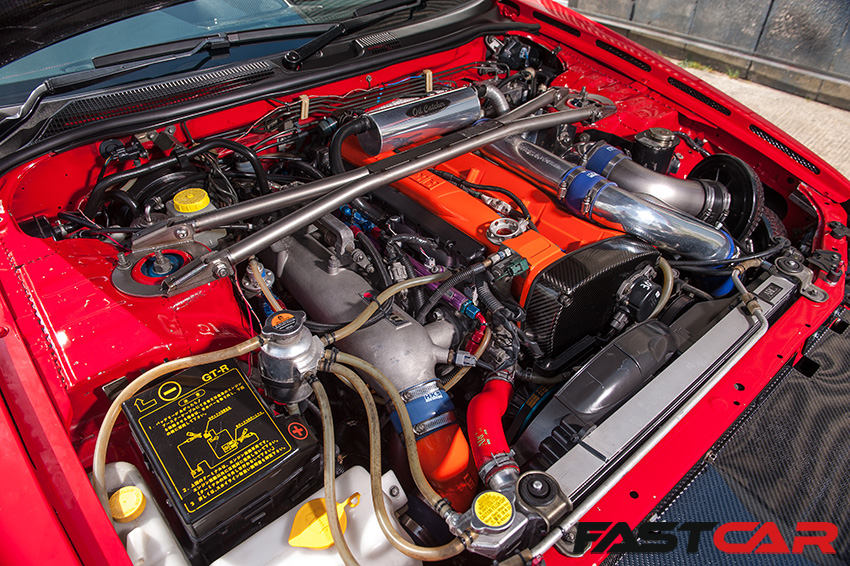 ‘The recipe for on-track domination began with the engine,’ explains Ozz as he pops the GT-R’s lightweight bonnet. ‘ATTKD removed the RB26DETT motor to install an HKS 2.8-litre stroker kit. Consisting of 87mm forged pistons, H-section forged con-rods, and a forged lightweight full counter crank, the Stroker kit’s increased displacement provides greater low end torque, plus more power to spool the twin HKS GT2530 turbochargers before exiting through an ATTKD titanium down pipe and into a lightweight ATTKD titanium exhaust system. ATTKD stuck with the twin blower set up, as opposed to fitting a big single turbo, as the twins offer improved response and a more linear delivery – essential ingredients for securing the fastest lap times on track.’

Breathing in through a pair of HKS Power Flow intakes, the twin HKS snails blow into HKS intercooler piping and a deep ARC front-mounted intercooler. Sharing space in the nose with a HKS oil cooler kit, the ARC unit helps keep the intake charge temperature under control when pushing the motor to its limit. 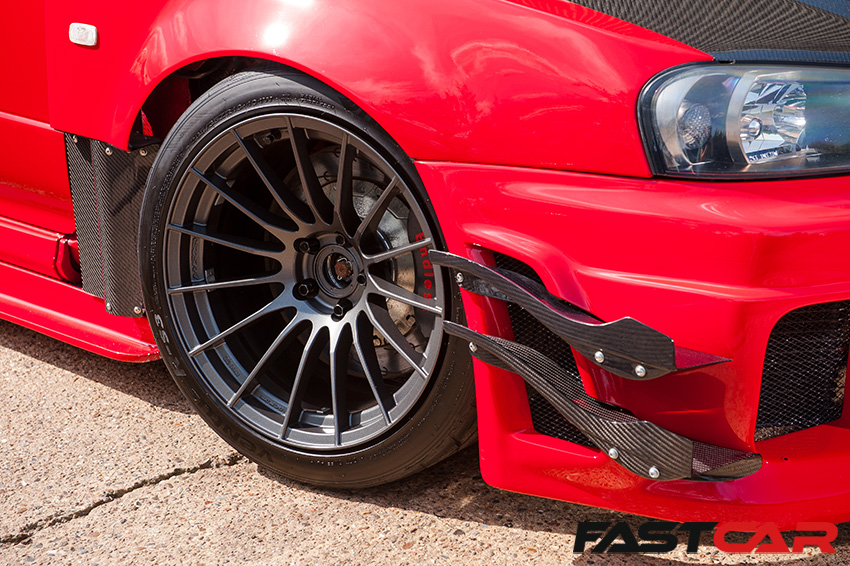 ‘Interestingly, not all the mods on the tuned Nissan Skyline GT-R R34 are designed solely for flat out track use, as ATTKD wanted to retain as much on-road useability as possible too,’ Ozz says. ‘One item that helps the car perform its dual roles, both on and off the circuit, is the HKS V-Cam system, which replaces the intake camshaft and allows the use of variable valve timing on the intake side whenever the system is activated. Interfacing with a HKS F-Con V Pro engine management system, the V-Cam system has been used to maximize the power band for more than just high-RPM track use, making it just as raucous on the road at more reasonable engine speeds too.’

Pushing out 650bhp, the motor is far from the stratospheric outputs we’ve seen from RB26-equipped cars in the past, however, as this car was built to dominate at the tight and twisty Tsukuba track, it doesn’t need the outright power of a car competing at a much larger and faster circuits such as Fuji, so ATTKD limited the power, instead focusing on response, so as to keep it useable on the road but still exactly the right amount to work at the track. 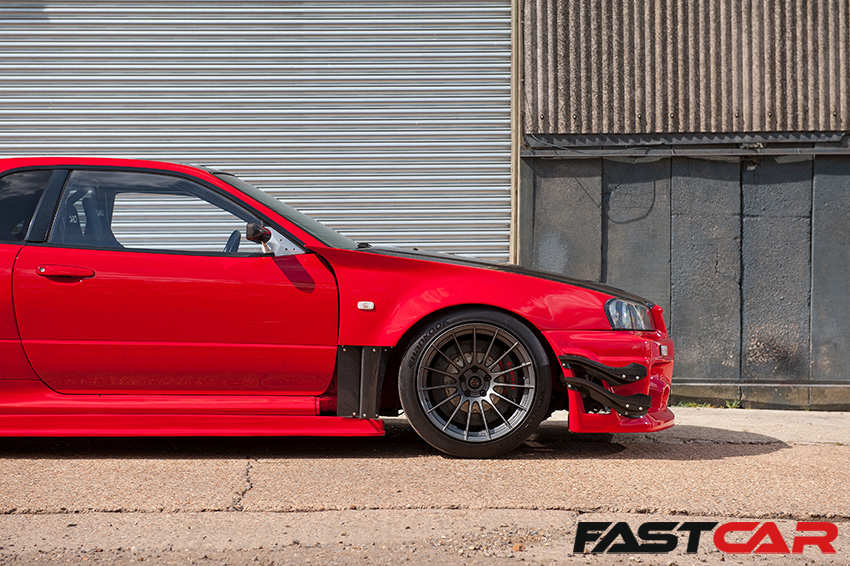 ‘The way the car builds speed and the traction it gets off the line is immense,’ grins Ozz. ‘It’s certainly more than enough power for the road, and weighing in at around 100kgs lighter than a stock R34, I can see how it would be a weapon on track too.’ 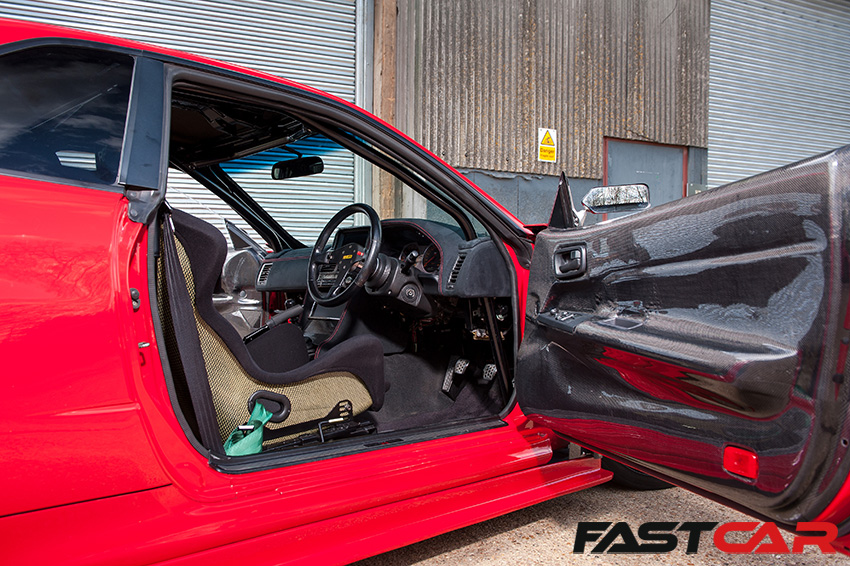 Time to put the R34 Skyline on a diet

ATTKD have form for building fast track cars so know the benefits of weight reduction only too well, which is why the R34 features a host of trick carbon fibre and titanium parts to shed that one tenth of a metric ton from the GT-R’s frame.

‘As well as the titanium exhaust and various pipe work in the engine bay, ATTKD also equipped the GT-R with titanium strut braces from ARC and Kansai Service – in fact, even the bonnet stay is made from the exotic lightweight metal,’ highlights Ozz. ‘Other lightweight parts include the bonnet, boot and roof, which all are dry carbon-fibre, as is the huge ATTKD GT500 rear wing and Craft Square mirrors, while the wild Sunline Racing front wings and ATTKD front bumper are both made from lightweight fiberglass and the windows are Perspex.’ 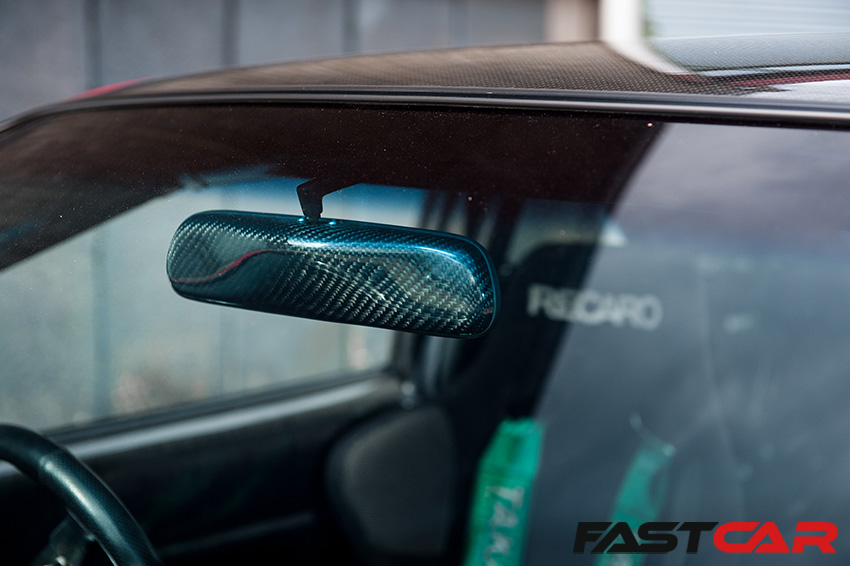 The tuned Nissan Skyline GT-R R34 had its diet continue inside the cockpit too, where the rear seats have been deleted and the factory front seats have been binned in favour of lightweight carbon/Kevlar Recaro buckets with Takata harnesses, the door cards replaced with Sunline Racing carbon-fibre items and a Robson Design multifunction cover and air conditioning panel also made from the lightweight weave.

‘Considering this car has spent much of its life on track, the interior is still an exceptionally nice place to be,’ Ozz points out. ‘The dash may only feature the top half – the bottom half deemed an unnecessary weight burden for the 650bhp motor – but how it has all been done just shows the attention to detail that ATTKD put into their cars.’ 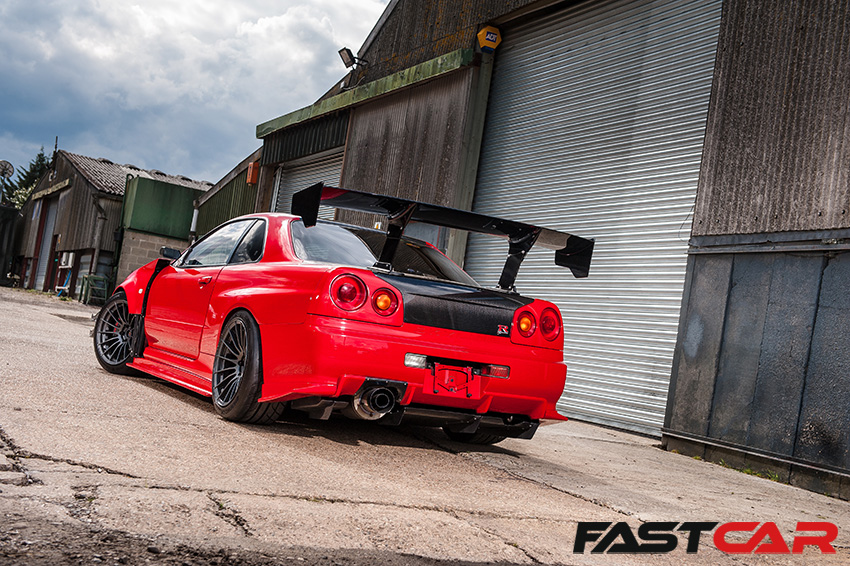 Where a dedicated track ride can do without the niceties of a luxury interior, you wouldn’t want to drive them everyday like that, and the guys at ATTKD have come to an excellent compromise with their road-going track GT-R. The half dash is trimmed in luxurious black alcantara with red stitching through which the Cusco 6-point rollcage passes with neat trim panels making for a very slick installation. It’s definitely an interior that means business, but is also finished to the highest standards giving the best of both worlds.

And that ability to straddle both the track and road disciplines and accomplish both to such a high standard is probably the most incredible thing about this car. Yes, the performance of the twin-turbo engine is electrifying; the braking via a set of Endless six-pot calipers both front and rear clamping huge dinner-plate-sized discs is astonishing; and the custom tuned adjustable ATTKD coilovers allow the heavyweight GT-R to dance like a flyweight and drive like a car half its size; but it’s the fact that a car so focused as to be able to deliver a sub-57-second lap of Tsukuba can still be useable as a road car that is the biggest surprise. And it just goes to show: like the adorable yet ferocious honey badger, you should never judge a car on its initial appearance, because with the right combination of modifications and a tuning pedigree like that from ATTKD, even a road car can be a true track terrorist capable of decimating all that come before it. 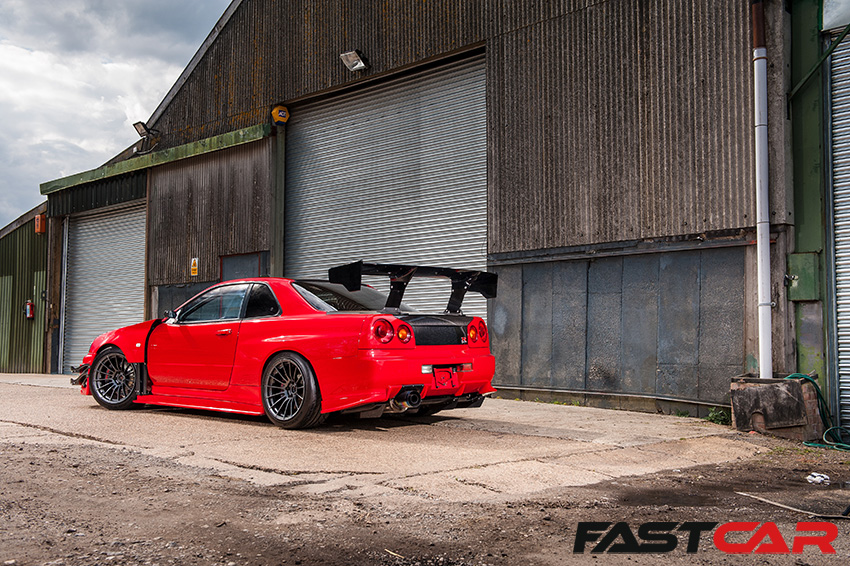