The more you look at Mark Fisher’s tuned Mk5 Golf Edition 30, the more dazzling details you uncover. By paying particular attention to the small stuff, he’s created something devilishly good…

The true magic of life can always be found in the details. The rich texture of reality is firmly grounded in the attention that’s paid to sweating the small stuff; in much the same way that your ol’ grandma used to say ‘look after the pennies and the pounds will look after themselves’, so the bigger picture is always underpinned by a million smaller snapshots. Mark Fisher’s tuned Mk5 Golf Edition 30 is a case in point. See how it’s liberally slathered in carbon fibre? Each of those individual elements represents a series of considered decisions and a lot of hard work and effort. Indeed, the very nature of carbon fibre itself acts as a metaphor for this project: the strands within the material are around 0.00020” in diameter, and yet these infinitesimal pieces add up to a stronger and prettier whole. And the carbon fibre reinforced polymer they reside in? That’s a composite material, something which by its very nature requires a matrix and a reinforcement: scale the idea up, and that neatly describes this car. The Golf is the matrix, and Mark’s creativity and imagination provides the reinforcement – it’s a hybrid in the traditional sense of the word, fusing disparate ingredients to improve the formula.

When we comb through Mark’s diverse automotive history, it’s no surprise to learn how and why he’s such a details man. Over the years he’s refined his craft; starting out with classic Minis and progressing to Fords of both the concours and fast-road variety before graduating to the VAG stable, he’s endeavoured to keep upgrades in the OEM+ way, with parts, upgrades and even engine swaps always coming from the same family, with the aim to turn his cars into the ultimate versions of themselves. It’s a quest for perfection – doing the job better than the manufacturer could do, and creating something that could have once sat on a dealer forecourt if only we lived in a more dream-like world. 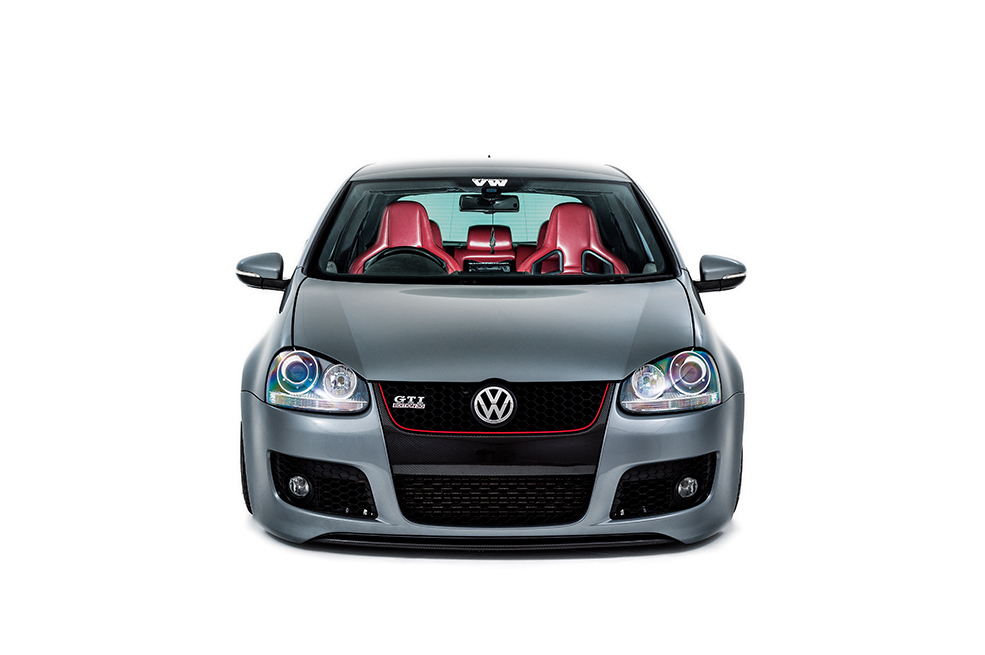 So why a Mk5 Golf Edition 30 this time? Well, the car sort of chose itself really. “I was looking to get back into a petrol hot hatch, but after driving most I was undecided,” Mark recalls. “In my head I wanted to go German, but R32s and GTIs didn’t do anything for me. I started to look at the K04-equipped cars, and preferred the interior of the Edition 30 over the Pirelli – so it was just a case of finding the right one.”

Having spent a few weeks trawling the classifieds for a likely candidate, this one popped up in Lowestoft, a breezy eight-hour round-trip away. The spec was spot-on and the car was all standard; a low-mileage, two-owner example that had been pampered and cherished and serviced way more often than it ever needed. It was quite clearly The One, and Mark wasted no time in signing on the line and bringing it home. 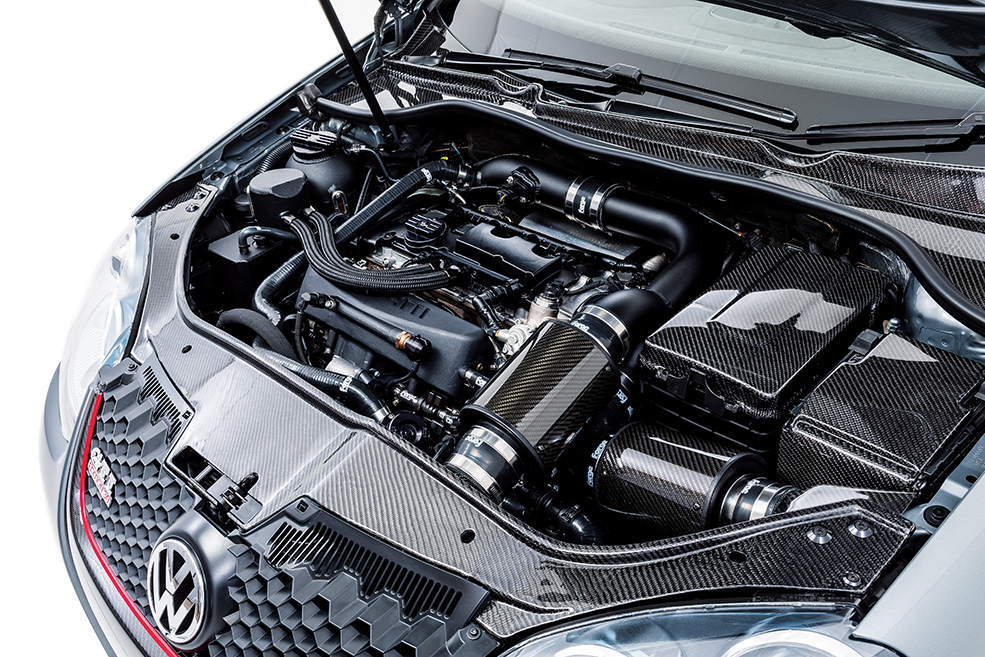 “After going full ‘show spec’ with previous builds, the idea with this one was simply to add a few OEM+ touches,” he says, “making it drive and handle better as well as adding some more power. That was all. This idea lasted about three months…”

Well, yes, when you’ve already been corrupted by the power of your own creativity, any concept that starts out with the term ‘simply’ is always going to escalate into something bigger and brighter. That’s just how this game is played. And having fitted a few choice mods from H&R and Forge, a conversation with the latter rapidly sent our man down the old path. After all, he’s got form with looking at the Forge menu and ordering like tapas.

“I spoke with Alex at Forge Motorsport, and we put together a long shopping list!” he laughs. “Pretty much every component they listed for the car made their way onto the Golf, including a few that had been made for development or in limited quantities. Then it was time to look at the wheel and suspension setup in more detail, so I started speaking to Luke at Plush and we went ahead with Air Lift Slam and V2 management with a tidy Alcantara boot build for the air and audio setup.” 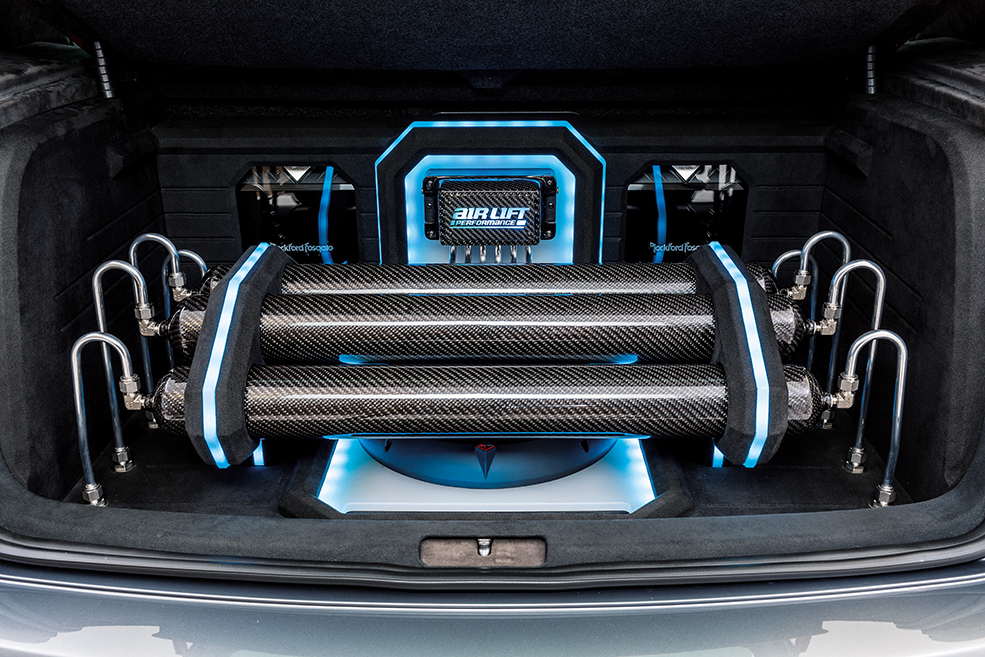 You can see how things start to snowball, can’t you? But keep in mind that while the upgrades are comprehensive, this has never been a case of just chucking parts at the car with the aim of having all the right names attached to it. Every single element has been carefully thought through.

Keeping the OEM+ angle front-and-centre, Mark fitted a set of Helios wheels from a Phaeton – and with that, he was good to go. Handling sorted, aesthetics sorted, power sorted, job done. Right?

No, of course that wasn’t the end of it. There seldom is an end, is there?

“Although the Edition 30 interior isn’t a bad place to be, it wasn’t where I wanted it,” he says. “After a few more conversations with Plush, it received a full trim based on some Recaro CS that were ‘surplus to requirements’ from Forge as they’d been used on a run to the Nürburgring before taking them out and storing in the warehouse. To keep the OEM feel, hexagon stitching was used throughout the trim, tying into the hexagonal design in the front grille. Some subtle touches were added along the way, such as the US-spec driver’s doorcard modified to fit the passenger side, and with the retrim completed I wasn’t happy with the dash as it didn’t tie in with the headlining and doorcards… so Luke trimmed this up in Alcantara to match.” 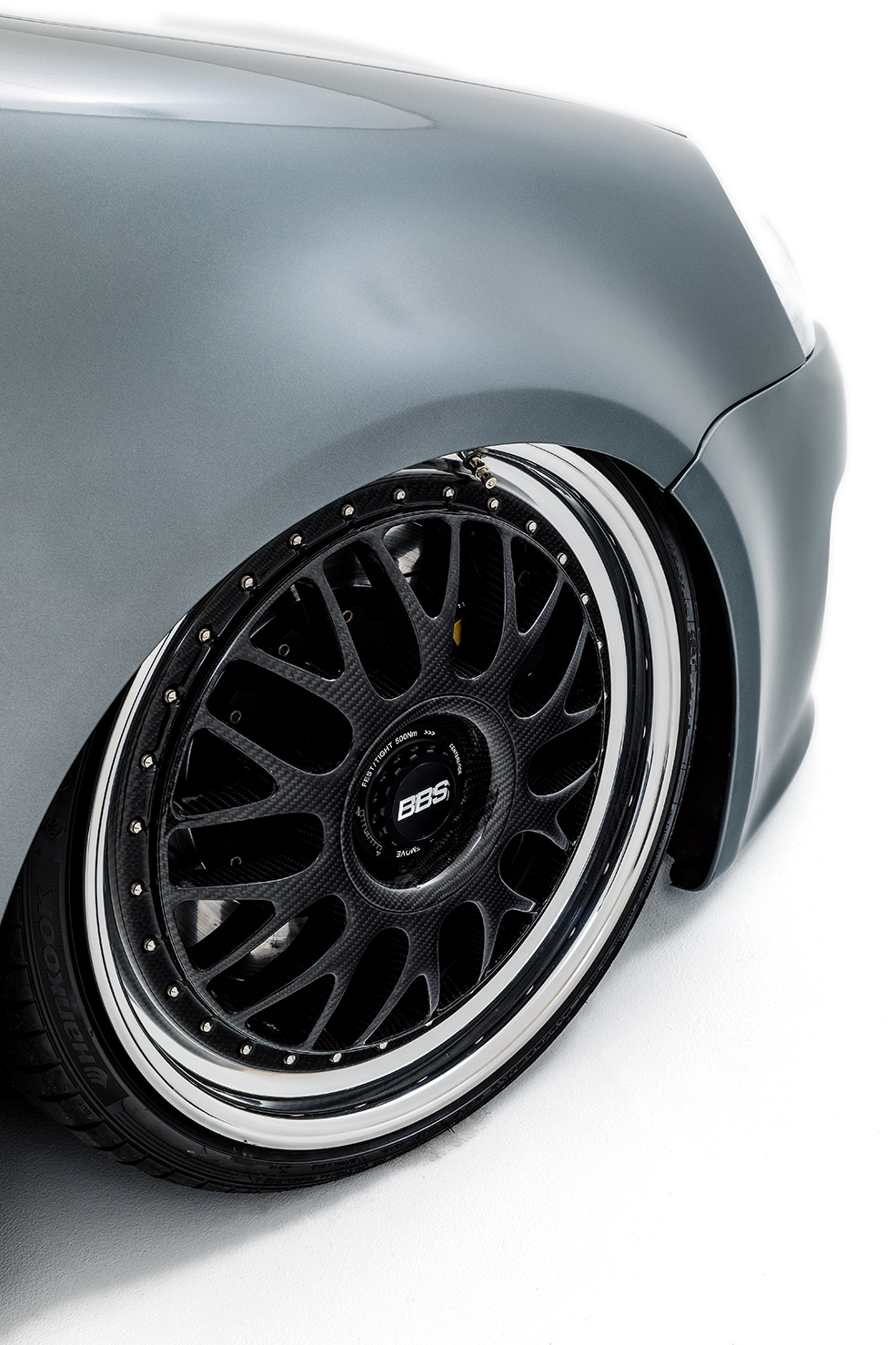 Things had already progressed way further than planned, and as Mark started to take the car to some shows he found himself picking up more and more trophies – and this was all the impetus he needed to take the build to the next level.

“Tim at True Paintworks was recommended to me,” he continues, “and after a chat I dropped the car off for some smoothing; blending the front bumper into the splitter, deleting the trim under the headlights as well as his signature Mk6 wing mirror conversion, and front wing mod for more wheel clearance. I wanted a US-spec rear bumper, but didn’t want just a US bumper – as not only has it been done to death, but I wanted to keep the Edition 30 look. So, nine individual pieces of rear bumper later and Tim had crafted one with a shortened recess to give me the look I was after. A full repaint, and the Golf was ready for collection!” 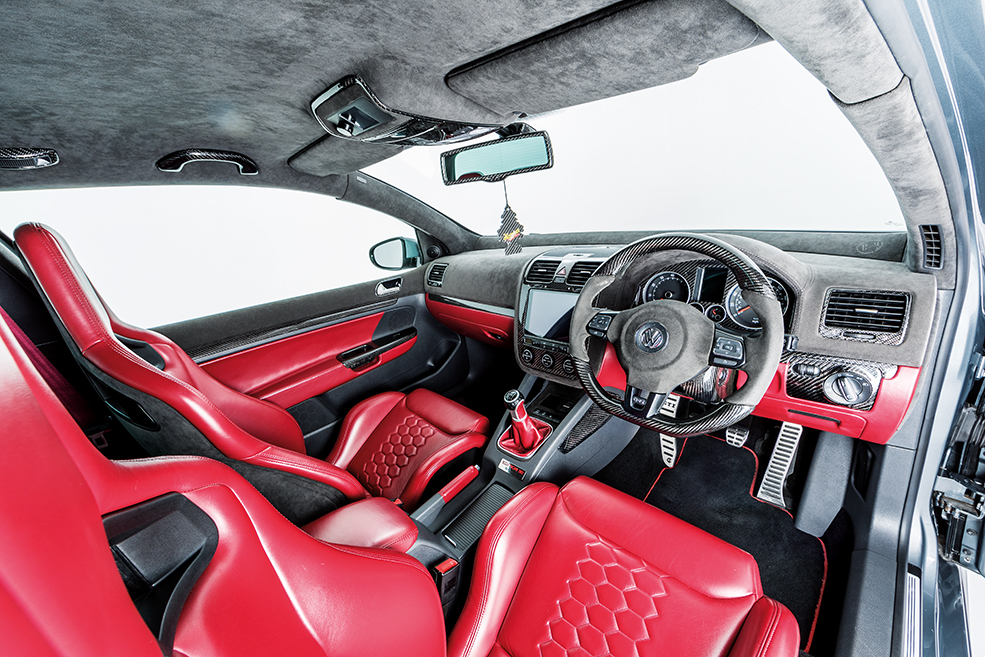 Yep, we’re definitely some way from ‘simply’ by this stage. The ideas were coming thick and fast; soon after this, a set of Lamborghini Calisto wheels were sourced, split, colour-coded and rebuilt, before thoughts turned to audio. Mark’s always been an audio man, and a conversation with Reece at RTA resulted in an iPad dash conversion with optical cables all controlled by a DSP, which later had a separate control mounted in the sunglasses holder in the headlining. And then, of course, there was all the carbon fibre…

“I’d had touches of carbon on a previous car, and knew I’d get a few bits and then want a few more, so I decided to go all-in,” he grins. “The brief was that anything not painted on the outside was to go gloss carbon, and any smooth plastics inside were to be satin carbon. New interior parts were bought and sent off to Paul at C6 Carbon, and the transformation began! Not long after this I was speaking with Phil at The Install Company, and a new boot build was planned out as well as a set of BBS GT-004 that a friend of his was selling. We also decided an upgrade was overdue, and Air Lift Performance front and rear struts were installed along with 3H management. Phil then got the headache of fitting ET27 rims! Machining the wheels, face-mounting the centres and individually machining spacers bespoke to each corner of the car, Phil had the fitment dialled in. And after a few months, I again wanted to push things up a notch so the wheels were stripped and sent up to C6 with all the other parts, including some tanks from the audio build.” 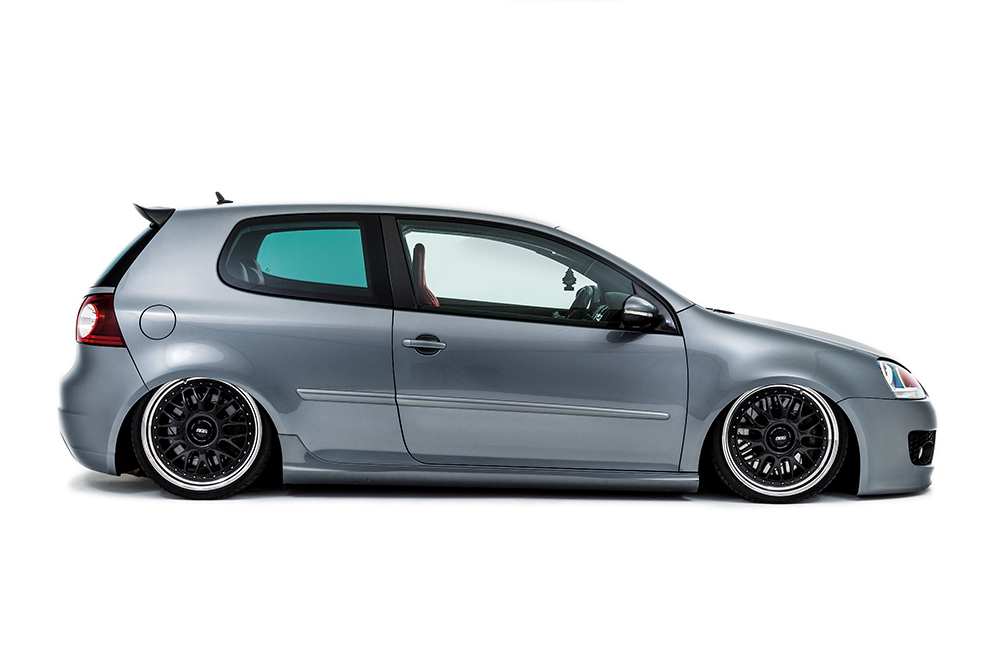 The pace of development with this car really is breath-taking. And as if you weren’t already gasping for air, it was around this time that Mark decided the tuned Mk5 Golf Edition 30 needed even more power. So he sourced himself an HPA inlet manifold, took a trip to the Revo Performance Centre, and came away with a fuel pump upgrade, Stage 2+ software, and SPS Pro – a clever control module that syncs via the CAN gateway, providing full control of the Revo software settings and modes via the factory multi-function display.

With all of this done, finally, after such thought and care and investment and effort, the car was complete. Mark was happy with the performance, the handling, the stopping power, and the aesthetics inside and out. Mission accomplished. 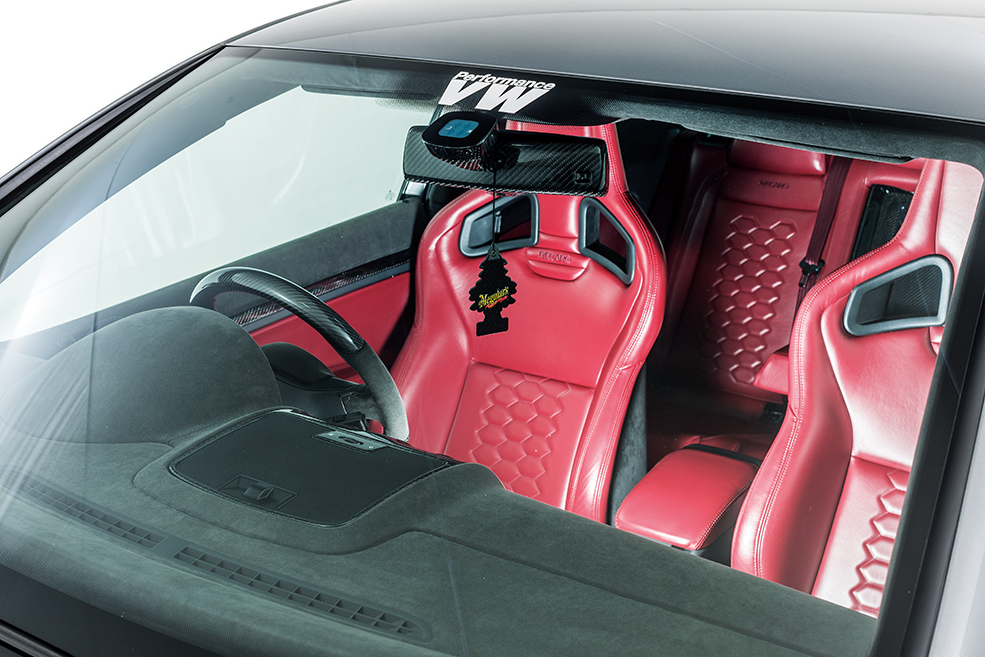 Well, almost. “A few tweaks were inevitable,” he smirks. “You can always change bits – although I never wanted to change things for the sake of it, or because I thought I had to. But yes, then came another full audio build from Phil at The Install Company as well as some custom speaker mounts and tricks from his years of experience in audio competition, and then sending all the carbon back to C6 to be treated to a gloss finish pretty much brings us up to the build as it is now.”

We are, of course, witnessing a moment in time. Mark’s cars never stay the same for long, he just can’t sit still. But will it be this car that continues to evolve, or a whole new project? “I feel I’ve taken this Mk5 Golf Edition 30 to the top of its class,” he smiles. “I think it’s time to move on to the next project, and I’ve got a classic that I’ll rebuild over the coming months.”

We certainly cannot wait to see that. Because we know, without a shadow of a doubt, that it will be a supremely detailed build, intelligently crafted and beautifully assembled. That’s just what this guy does. 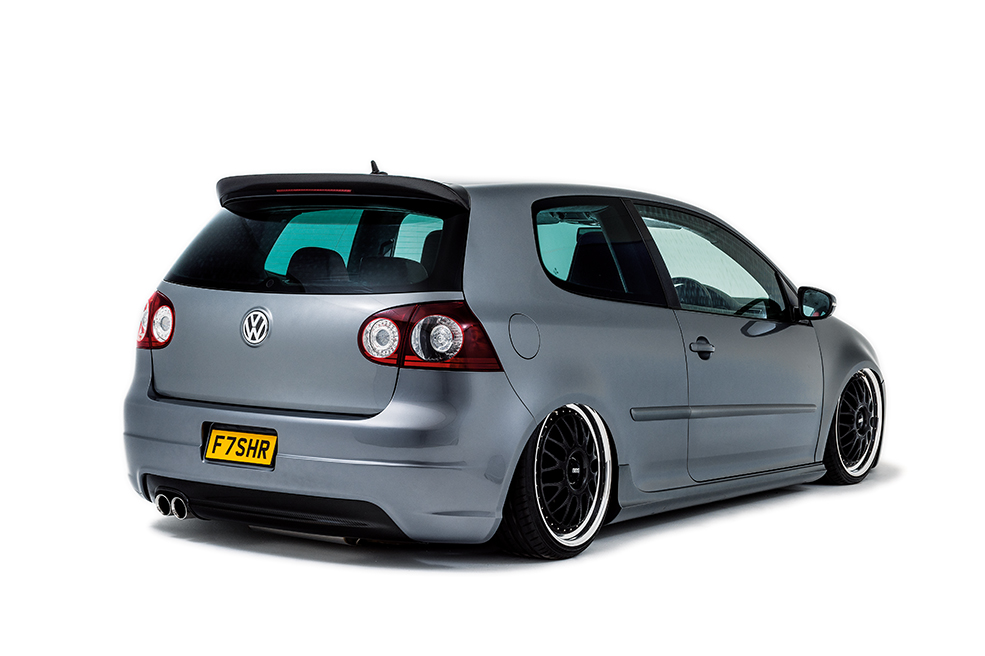