We talk about mean-looking cars, but this really is a mean-looking car… James Caborn’s tuned Mini R56 JCW looks like it’s ready to pick a fight with every car it sees, and it’s got plenty of muscle to back up that attitude.

Cars have faces. There is no question about that. We’ll swerve what the Cars movies did because that went against the accepted car-face convention (though we get why they did it), and if you do that, then we’re all in agreement that the headlights are obviously the eyes, and the grille forms the mouth. It’s fair to say that most factory Minis are designed with cute and friendly faces, and while the Cooper S and JCW models definitely have a bit more attitude, they’re not really angry-looking cars. James Caborn’s R56 JCW, however, is another matter entirely.

James’ tuned Mini R56 JCW is not a friendly car. It’s not cute and smiley, it’s not happy to see you, and it doesn’t want to be your friend. James’ R56 is angry – it’s having a bad day, it’s got attitude, and if you look at it funny, it’s probably going to deck you. This Mini does not play well with others and, with its black-on-black colour scheme and fat, wide arches, it’s got enough presence to bully just about every car on the road out of its way, and we love it. 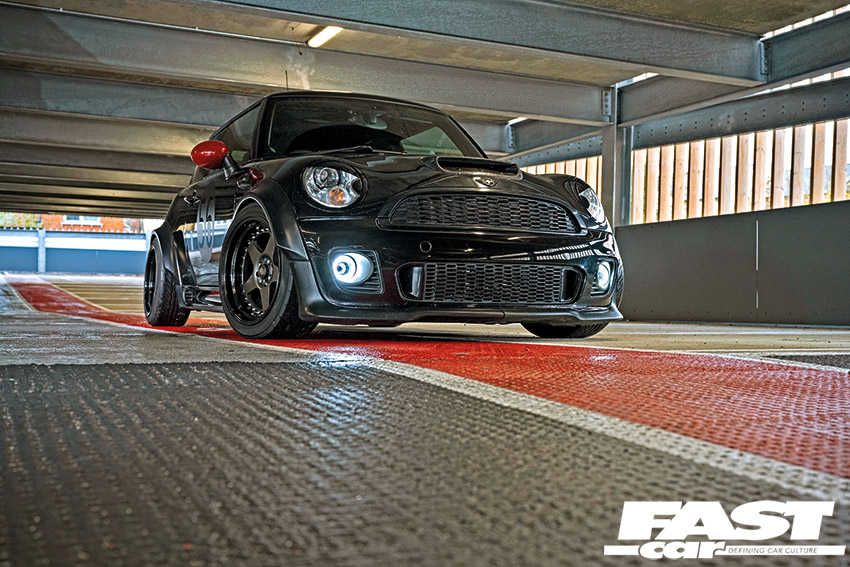 James loves it too – the R56 JCW purchase came about from both his long-standing interest in classic Minis and the need for a car that he could use every day. A Mini was the best compromise, and a JCW was the best choice. “The JCW that I own was the first one that I bought. I owned an Audi A5 that went wrong; I sold it back to the company I bought it from and needed something for daily use that was still fun and something I could keep for a long time,” reasons James. “What I really wanted was a classic Mini, but they weren’t practical enough for daily use. I find the R56 the best shape available in terms of looks and what it delivers.

They are slightly more robust than the earlier R53s but more fun and agile than the F56s. It’s a car that I intend on keeping for a long time, and for that reason, it needed to stay fun, which is why I bought a JCW rather than a Cooper S,” he adds. A bit of searching led James to discover this completely stock example for sale some 40 miles from him, in excellent condition and with a full service history present, and such a cherished Mini could not be passed up.

Now, you don’t just casually decide to take a tidy original Mini and turn it into a wide-arch bruiser, but James is no stranger to modding, having previously tweaked an Audi A1 and a BMW E92 3 Series, which were both treated to a selection of upgrades, but he’s never built anything on the scale of this Mini before. “I was always going to modify the car and get it the way I wanted it. I was scrolling through Instagram a few months after I bought it and came across the wide-arch kit I have now. I know there are other options available, but that was the one I had to have,” he grins. 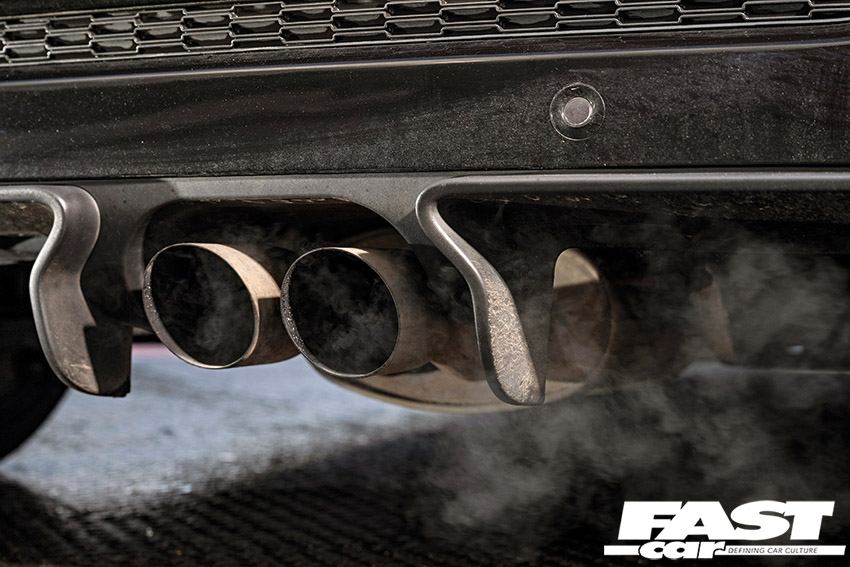 We have to talk about the kit first, really, because it dominates this car and gives it so much attitude – we can see why James was so smitten with it. “The exterior styling was decided the moment I saw a picture of that wide-arch Mini in America. It took me a few months to hunt down what kit it was and then get it ordered,” he tells us, but it was worth the effort as it looks simply awesome. A wide-arch kit completely transforms a Mini, it gives it that aggressive, broad-shouldered look, with real purpose and presence that makes it look like it can dominate the road.

The arches might be the main attraction, but they’ve got plenty of support from the additional styling mods that James has fitted. These combine to really ramp up the aggression and make sure this Mini always gets noticed. Up front, there’s a larger carbon scoop, then you’ve got the GP rear wing and diffuser plus the Union Jack rear lights. But, there’s one more addition here, one that’s not immediately obvious, but one that’s extremely impressive and makes a big difference to the whole look of the car. Look closely, and you’ll realise that the front wings are vented at the rear, and these custom items are seriously cool and make this tuned Mini R56 JCW even more of an impressive build. And the finishing touch? Why it’s making sure everything is black, all black, with that de-chrome kit, the badges, the black door decals and, of course, those scowling black eyebrows.

When you’re building a car, wheels can make or break it, and especially so when you’ve gone all-out with a wide-arch kit, so no wonder James took his time making a decision. “The wheels took a long time to choose, I didn’t want to go with any of the obvious choices, but I also needed something that fitted well within the arches. The Rotas gave me the option to have something different, that fitted properly and gave the aggressive look that I wanted,” he says with a satisfied smile. 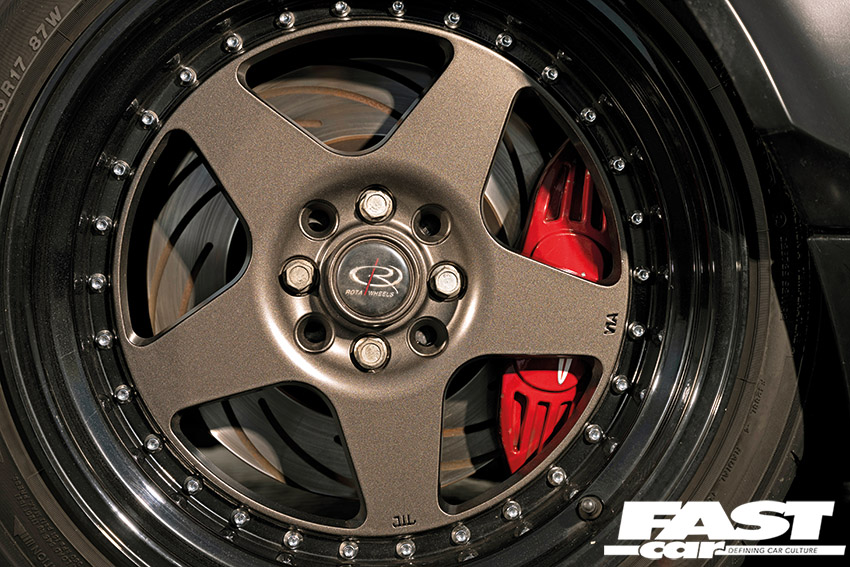 The Kyusha 17s look great here, they really suit the car, but most importantly, they have the impact to match the kit and the width and fitment to fill out those fat arches to perfection. It’s a match made in heaven, and it’s further enhanced by the suspension upgrades because you can’t put together a build of this calibre and leave the car rolling with a stock ride height.

“The suspension and chassis modifications are a set of HSD coilovers and an SW Motorsport rear strut brace. At the time, I was using the car every day, so I didn’t want a full cage, and that’s why I went with the rear strut brace. The coilovers are my second set as I snapped a strut on the first set, so I wanted something that was decent quality,” explains James, and the HSDs are doing some work here. They’ve got this Mini sitting just right, with the arch gap gone and the stance spot on – it’s so satisfying.

Of course, with that eager turbo four-pot under the bonnet, it would have been rude of James to leave it stock, and while he hasn’t gone mad with it, he’s given his JCW a healthy boost in performance. “I’ve mainly done supporting mods for stage 2 power, so there’s an AEM induction kit, MTC intercooler, Powerflex engine mounts and GFB DV+ diverter valve,” he says. That little lot has netted him 257hp, which has definitely made this Mini even more thrilling to drive. 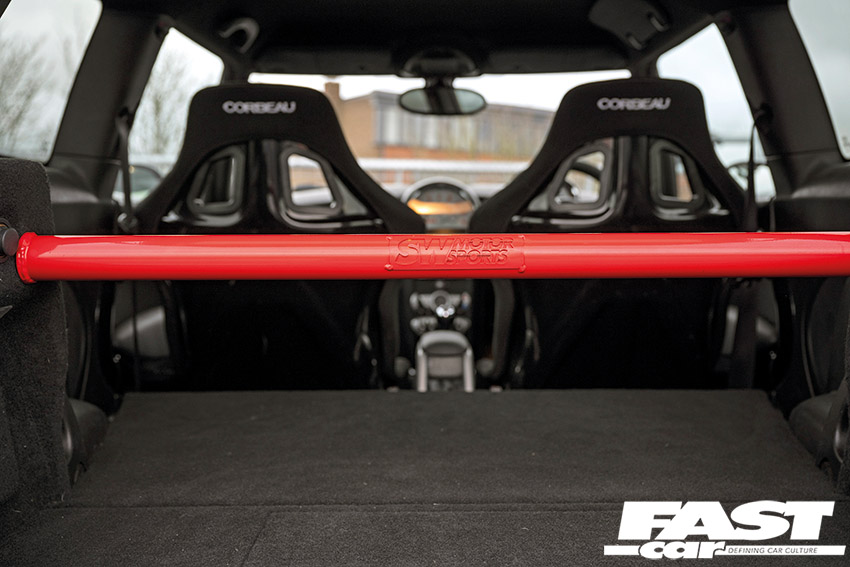 Finally, we come to the interior, and James has treated it to a fine selection of mods that give it a focused, hardcore feel, though there’s plenty more to come. There’s a pair of sexy Corbeau Clubsport seats that offer masses of support, an equally sexy Alcantara steering wheel that pairs perfectly with the seats, and it’s finished off with a rear seat delete with a flat carpeted boot floor. “The interior is still nowhere near how I want it,” James tells us. A Coolerworx short-shifter still needs to be added with a full Alcantara dash, some carbon fibre and a full cage,” he smiles, and that’s all going to look so good in here.

James has owned his tuned Mini R56 JCW for just under three years now, and in that time, he has done some serious work and given this unsuspecting Mini an incredible transformation that has really taken it to the next level. There’s so much to enjoy here, but, really, it’s all about those arches, especially when combined with those achingly cool custom vented wings, and for James, they are the stars of the show. “My favourite mod is the wide-arch kit, the way the car looks has always revolved around getting that fitted,” he grins. Of course, a project is rarely ever truly finished, and even with this many mods on board, James has plenty more in mind for his tuned Mini R56 JCW.

“I’m not sure at what point I would ever class it as finished. It’s had stuff added to it continuously and probably always will,” he smiles, and with no plans to sell it, this Mini is only going to get meaner still. Of course, James’ perma-grinning face behind the wheel will take the edge off that attitude a little, but that can’t be helped – this is a car that just makes you smile. 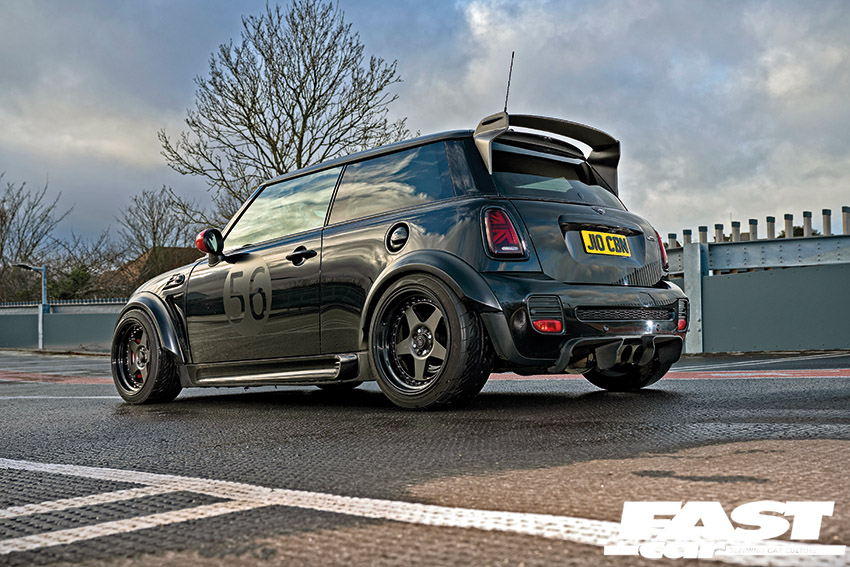