Some might say that brown is a brave choice for a high-end JDM build, but Sean Malone’s tuned Mazda RX-7 FD is positive proof that if you build the car you want rather than trying to please other people, the outcome will be all the better for it…

We owe a lot to the 1970s in terms of style, culture and fashion. The area of seventies automotive fashion, however, is something that a lot of people would happily leave behind.

There is, however, one 1970s motif that’s back with a vengeance: brown. The muddy hue may have been left in the wilderness for a couple of generations as people harshly sidelined it as the preserve of Morris Marinas and Austin Allegros, but brown paint has shown a staggering resurgence in recent years. Pretty much any manufacturer you can name now has a rich shade of chocolate on the palette, and the show scene is grabbing onto the idea with both hands. 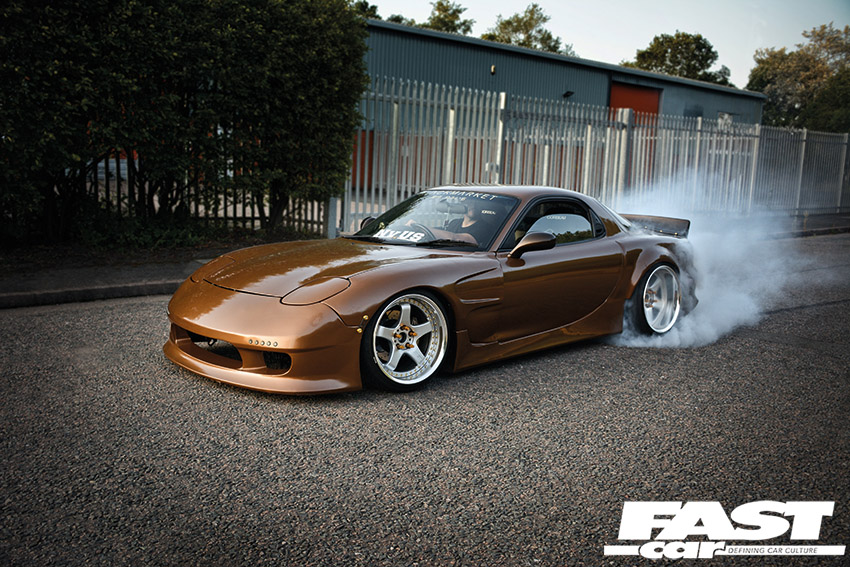 The tuned Mazda RX-7 FD (check out our ultimate Mazda RX-7 guide) we have here has been wrapped in arguably the coolest shade of choccy around – a BMW colour named Marrakesh Brown, which has just a frisson of golden sparkle to it in the right light. A lot of people told Sean Malone he was mad to be considering wrapping his Mazda RX-7 FD in this sort of shade, but it all goes to show what a personal build this is to him. ‘Build your car for you’ is very much the ethos here; this is what Sean wanted to do, so he did, it’s as simple as that. Thankfully the results are pretty spectacular – although we shouldn’t be entirely surprised, as the man has form in the area of applying crowd-pleasing mods to any and every car he lays his hands on.

“I’ve been modifying my cars since I was 17, starting out with a Mk2 Fiat Punto Sporting,” he explains. “In the early days I was just learning the basics, wheels and lowering springs, stuff like that. Since then I’ve owned approximately fifteen cars, and not a single one of them has stayed standard. Life’s too short for boring stock cars! I’ve owned quite a variety too, including a Mk2 Golf, a classic Mini, a 300bhp Mazda 6 MPS, and a drift RX-8.” 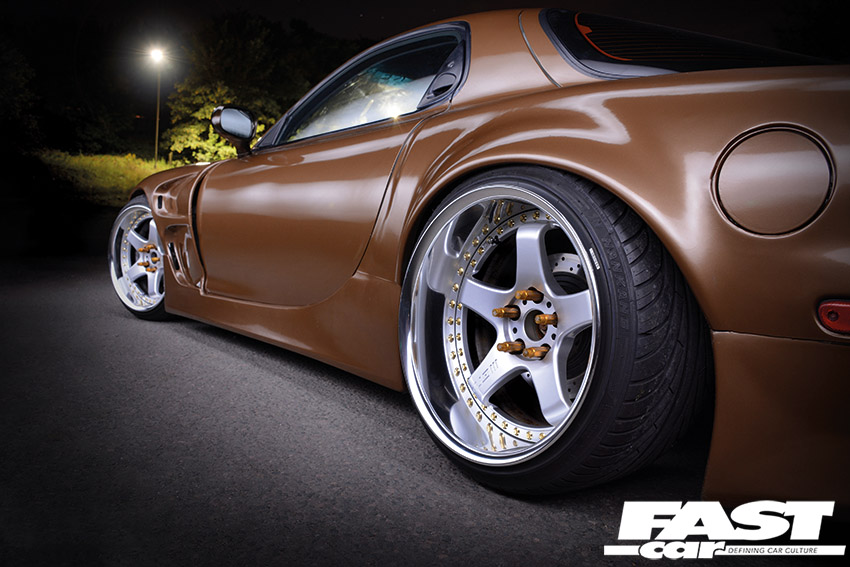 He’s a man of diverse tastes, then – so why a tuned Mazda RX-7 FD this time? Well, as is so often the case with feature car owners we talk to, it can all be attributed to a youth spent racing around in video games. “I’ve always loved the RX-7, from when I was a kid playing Need For Speed on the PlayStation,” Sean explains. “The sound, and the sleek, low body… it was always going to be a car I’d own one day. Having owned and drifted an RX-8 beforehand, it gave me the rotary bug and spurred me on to making sure I owned a proper ’7 someday soon.”

That day came somewhat unexpectedly as Sean was holidaying in Florida. Lounging in the sunshine and casually scrolling through Facebook on his phone, he saw an ad pop up for a shabby but promising Mazda RX-7 at JapWestMods, the Dorking-based JDM specialist. Liking what he saw, he pinged them a message asking whether there had been much interest, saying that he’d be along to take a look if they still had it when he was back in the UK. On returning home Sean found that the car hadn’t sold, so he went down the next day to check it out – and instantly fell in love. Sure, it was fairly tatty and was wearing a damaged C-West bodykit, but he could see past the cosmetic issues to the potential within. 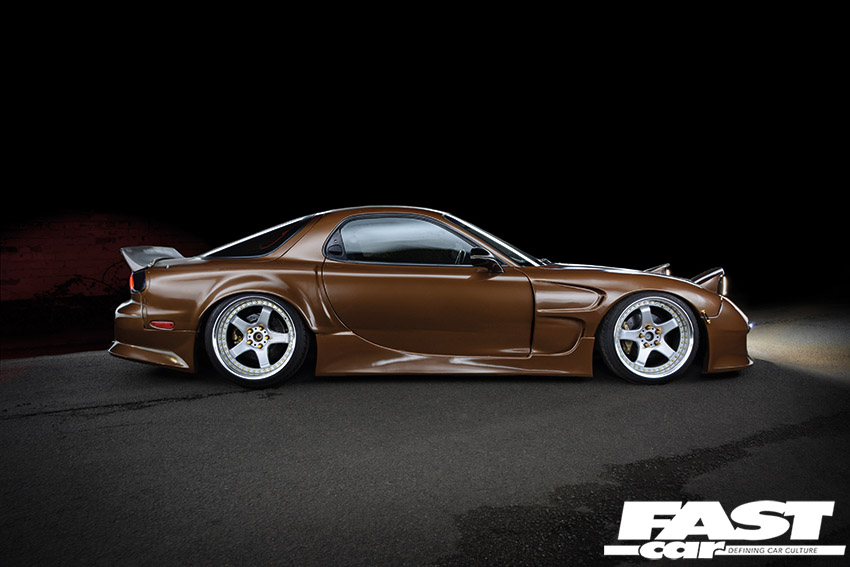 “I already had a vision of how this car would turn out – the first time round, that is.” he grins. “You may remember seeing it at various shows around the UK, and on my Instagram page @mr_maloney. It was painted white, sporting a full Rocket Bunny kit, gold hardware and some fancy 14.5×18-inch Weds Kranze ERM wheels. Yep, that’s the same car! Two years later I decided to change it up again, strip it back and rebuild with the kit, wheels and the colour you see in this feature today. The second evolution.”

For this fresh new makeover, Sean decided to do all of the bodywork entirely by himself, the sole exception being to draft in a friend to help creating the custom front bumper. For this part he took elements of the Rocket Bunny kit and merged it with the classic flared look of the Vertex kit, deleting the original sidelight/indicator aperture in the process and adding the Rocket Bunny running lights and indicators. The rest of the bodykit is all Vertex, which Sean has carefully fused with a set of wider DMAX wings – the fronts add an extra 30mm of width apiece, with the rear overfenders broadening either side by 50mm. 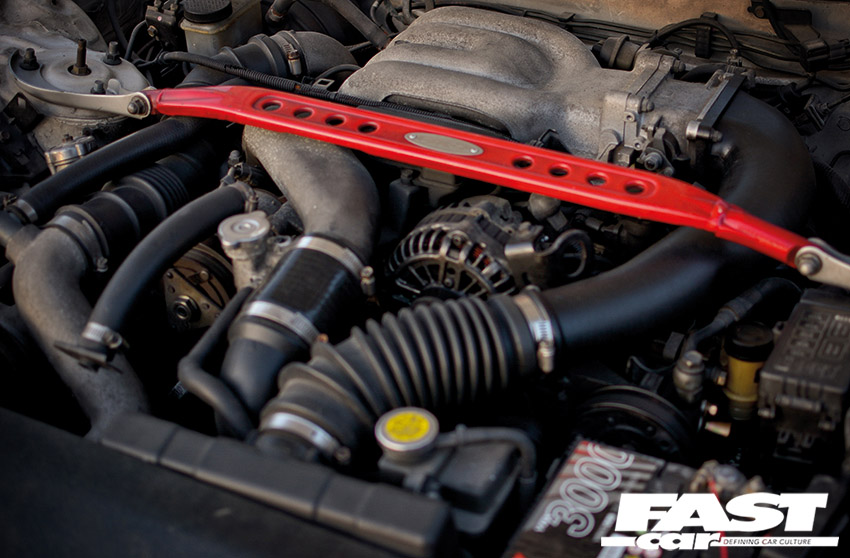 “I loved my old Rocket Bunny ducktail spoiler, so I bought a new one and fitted that again,” he continues. “To finish off the look of the exterior I sent the car to a friend and colleague of mine, Joe Cowling of Stage 3 Auto Aesthetics, for a full wrap in Marrakesh Brown. People were sceptical when I said I was going to finish it in brown, but I think my vision played out well in the end! I’m a strong believer in ‘build it for you’; no matter what people had to say about my colour choice, I was set on it and it was going to happen. It was actually the wrap that caused us the biggest headache though; not in the colour choice, but because the complex curves and contours of the FD with this kit made it a real challenge to wrap.”

The results on this tuned Mazda RX-7 FD really speak for themselves however, and it was worth all the stress and complexity. With two weeks of painstaking work to get the wrap perfect, Joe and the team managed to get the car ready for its big reveal at Japfest, with Sean’s final flourish for the makeover being a gleaming new set of WORK Emotion GT5 wheels. 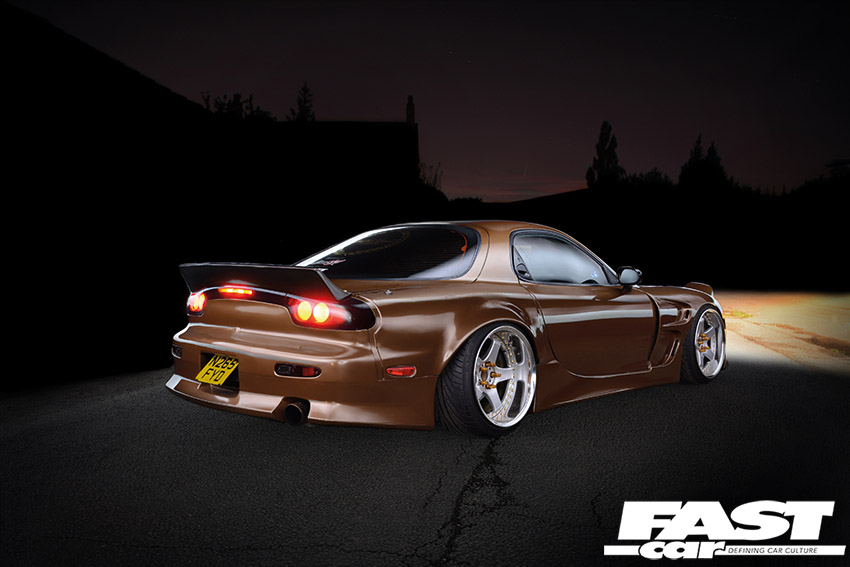 While it may all sound like Sean’s crafted this tuned FD RX-7 to look pretty and languish on the show circuit, that’s very much not the case. That twin-turbo 13B has been street-ported and treated to uprated induction, exhaust and various little tweaks, and he’s not afraid of getting out there and dicing with the traffic. “I often just drive it to work during the week, and go shopping in it and stuff,” he shrugs. “I get a lot of people trying to take photos of it while driving on the motorway to work and back, and I’ve actually had one guy come up to me in the supermarket car park and ask for me to take a photo of him stood next to the car!”

All of which speaks volumes about this car’s fabulous allure – it’s a gorgeous shape even in OEM form, and the Vertex / Rocket Bunny makeover truly accentuates that; the glimmering shade of unexpected brown is simply the icing atop an already delicious cake.