With CSL styling, BBS E88s and a whole host of engine and chassis upgrades, this epic, tuned E46 M3 build takes the already awesome M machine to the next level.

It’s fair to say that, if you’re a BM fan, then almost by default, you will be an E46 M3 fan, and that’s definitely something that can be said of Eumir De Leon (@s54_power). He is most definitely a BMW fan, and the Bavarian brand has been a big part of his life for a long time. “I’ve been into BMWs ever since I was a little kid,” he begins, “in the ’80s, my father owned a new E30 325is M Tech with gold BBS wheels and Bilstein suspension, exhaust etc., then again when I was in my early teens. I vividly remember him always washing and taking care of his BMW. The sounds of tyres chirping in between gears, the engine revving, and being glued into the seats would always put a smile on my face,” he says with a similar smile.

The E30 was his first true love, and unsurprisingly, he wanted to follow in his father’s footsteps. “I was supposed to be given my father’s last E30 as my first car but things got complicated for him so, that never happened,” says Eumir, and instead, he took matters into his own hands and bought an E36 325is as his first car. He didn’t go easy on it, mind, and as well as some Recaros, Style 5s and coilovers, he put together a custom turbo kit. But, as great as that turbo E36 build was, there was another car besides that first E30 that was also on his mind. 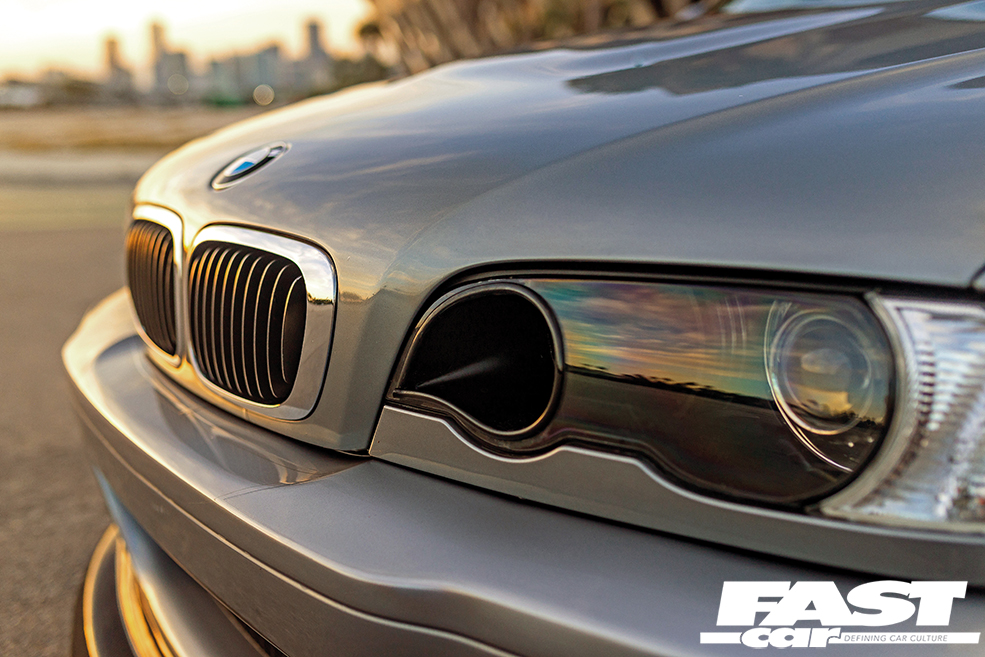 “As a kid moving down to Miami from NYC, I remember seeing the E46 M3 when It was new, in Laguna Seca blue. I remember thinking how futuristic and beefy-looking it was. I used to wonder if I would ever be able to afford that car…” he reminisces. “Fast-forward many years later, when I was a tech at a BMW performance shop, there used to be an Alpine white, track-ready E46 M3, with the CLS airbox, Recaro seats and Enkei NT03s. Seeing it fully specced out made me want to put those mods on my future car. Hearing it do a few pulls on the dyno and hearing the high-revving S54 complemented by a full exhaust and that CLS intake would just grab my attention, like ‘Wow! I need to have this already!’” he grins, and the M3 that’s parked in front of us is proof that dreams do come true. 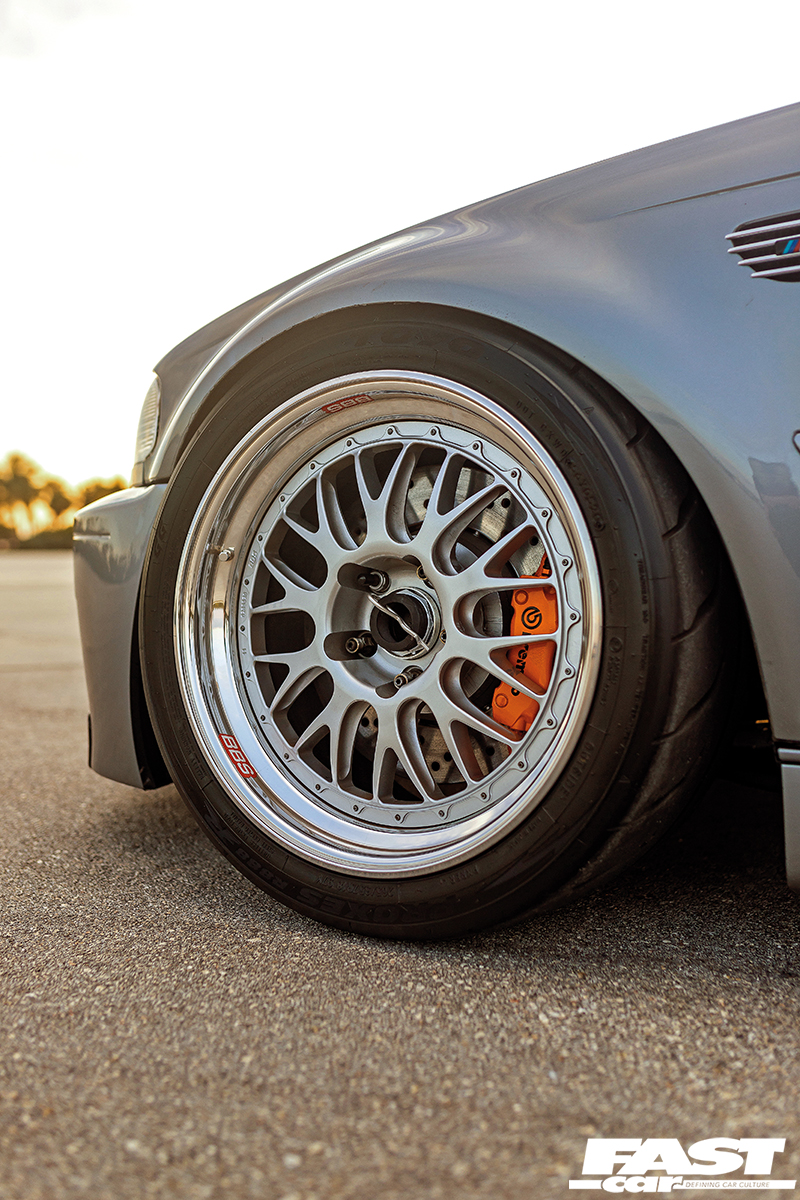 “When I began to search for the E46 M3, I specifically wanted an Alpine white with Cinnamon interior or Imola. At that time, prices were through the roof for that spec, so the next colour I was happy to settle for would be the Silver grey. As we all know, that’s one of the two colours the E46 M3 CSL came in. I looked online for months and couldn’t find an unmodified M3 anywhere. My good friend Fabian found the M3 I was looking for on Craigslist. I went to look at it and immediately I could tell how well-maintained the car was. It was bone-stock except for the rear wheel spacers. The previous owner looked very nervous to sell me the car as I looked young, and he likely thought I was going to ruin it. I told him, ‘Don’t worry, I’ll show you what I’m going to do to this car in a few months’. Every time we run into each other, he’s amazed by the car like, ‘Wow! This is on another level!’” smiles Eumir, and that’s because it really is. 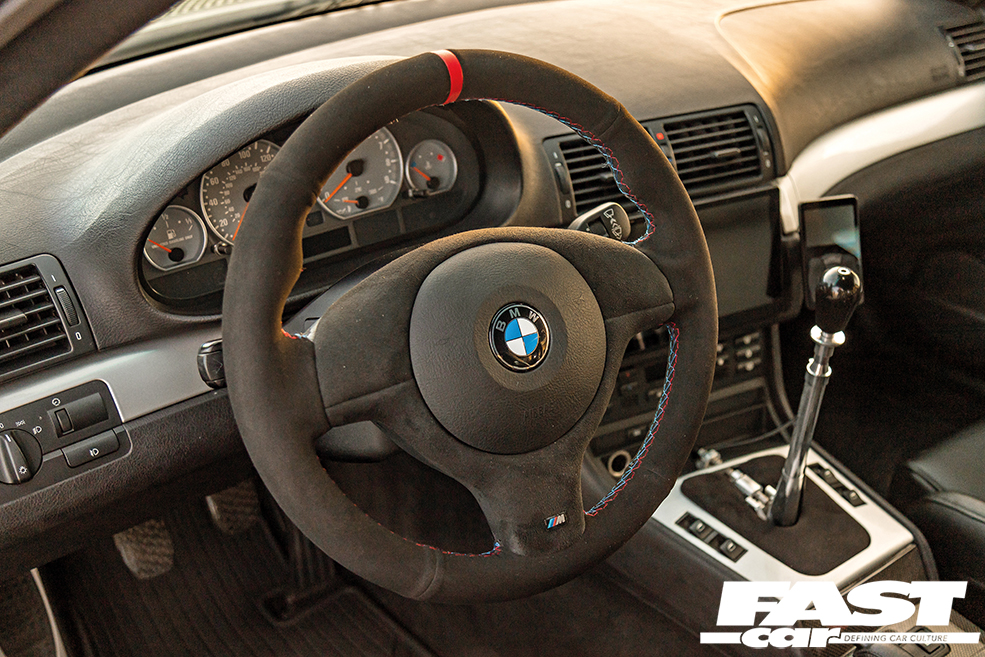 Having been inspired by that E46 M3 in the workshop all those years ago, there was no beating about the bush here, and Eumir knew exactly what he wanted to do. “My plan was to fully restore and build it to my spec that I’ve always dreamed of having,” he grins. If you can’t tell from looking at the pics, this was no small-scale casual build, and Eumir has put seven years of work into this tuned E46 M3, and every moment of that time was 100% worth it.

The S54 that resides under the bonnet has undergone an awful lot of work, and while your attention is immediately drawn to that awesome CSL airbox, there’s a lot more going on under the surface. Eumir has made sure that it doesn’t just perform like a dream, he’s also made sure it’s going to last. “I have fully bulletproofed the entire Vanos unit along with fully polishing the housing just to let it be known that’s it’s been worked on,” he grins. “I have also changed the rod bearings, fitted a Bimmerworld Vanos oil line, Active power pulleys, and a Mishimoto electric fan shroud with Spal electric fan. I’ve also added a CSF aluminium radiator, Mishimoto upper and lower silicone radiator hoses, Supersprint exhaust manifolds, and that CSL intake with custom CSL Alpha N tune,” says Eumir with a satisfied smile. That impressive array of improvements and upgrades mean that he can enjoy his M3, safe in the knowledge the S54 is now solid as a rock. Meanwhile, the performance additions haven’t just given this car a soundtrack to die for, they’ve also given him 370whp and 279lb ft wtq to play with, making this tuned E46 M3 one seriously rapid machine. 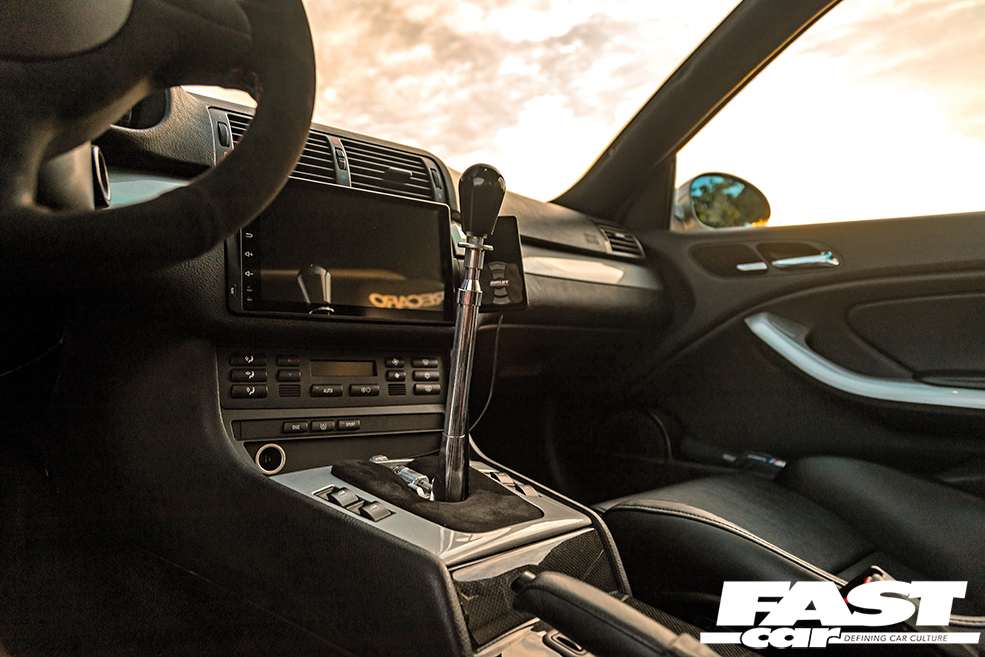 With this being such a thorough build, Eumir has left no area of the car untouched, and the chassis has received a comprehensive overhaul and upgrade. “The car is currently on Air Lift 3P modified air suspension,” he tells us, which no doubt has caused a large and sudden intake of breath for many readers, but it’s Eumir’s tuned E46 M3, and he can do whatever he wants to it. “The car’s chassis has been structurally reinforced all-round, starting with the rear subframe floor reinforcement plates from Redish Motorsport, along with the RACP, a Vince brace and gusset cups kit. Every single bush on the car has been upgraded with Powerflex, Revshift and AKG, plus I’ve added Hotchkis front and rear anti-roll bars,” he says, and that’s an impressive array of suspension mods.

We all know just how important wheel choice is when it comes to any build, and Eumir’s is absolutely top-tier. “Well, my dream wheels for the car are the wheels I currently have, which are the BBS E88s, inspired by Porsche builds,” he smiles. “I’ve gone through other wheels like the Enkei NT03, APEX ARC-8, then I accidentally came across a deal I couldn’t pass up with the BBS RS. They were cool but didn’t fit my driving style and look I was going for,” he adds. The 18” E88s look so good and suit this whole build perfectly, with that motorsport styling just working so well with everything else that Eumir has got going on. 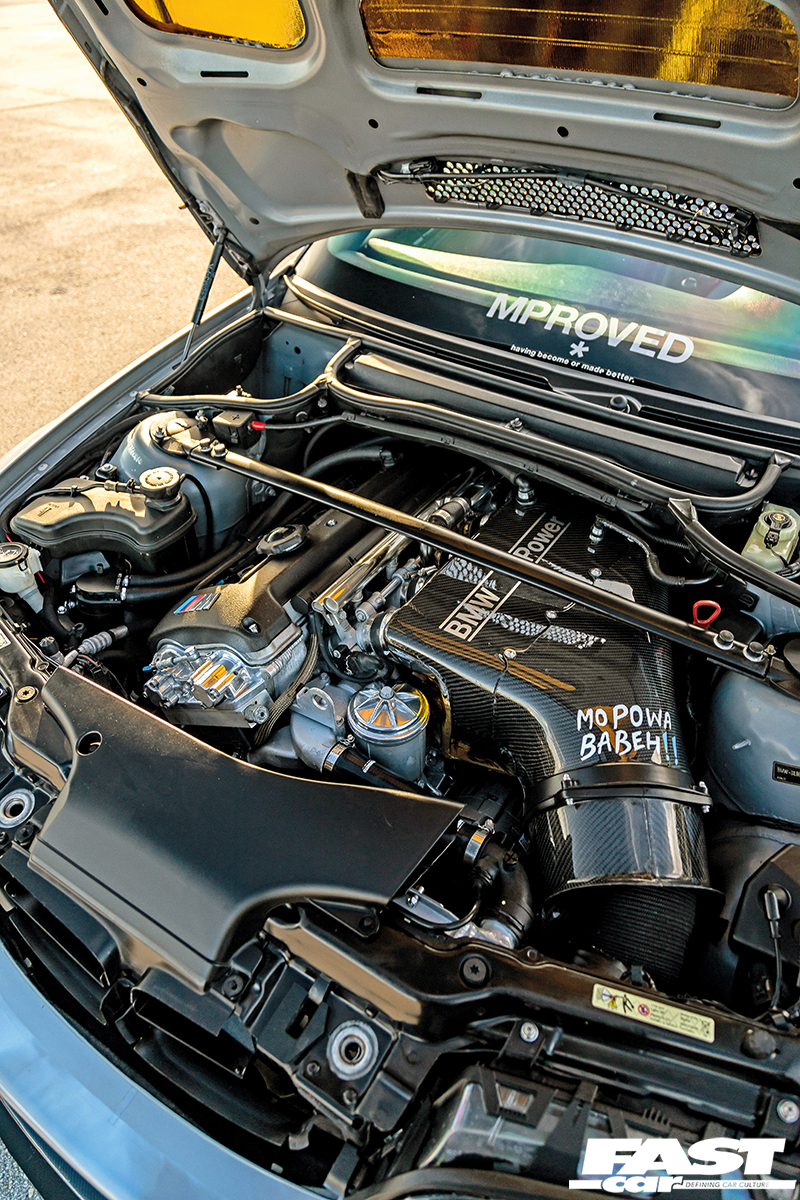 When it came to aesthetics, as with the rest of the build Eumir knew exactly what he wanted. “I’ve always strived to stay as close as possible to the CSL, but beefier and tweaked to my exact liking,” he explains, and he’s definitely achieved that. The changes are subtle but purposeful, just like a genuine CSL, and up front sits a CSL front bumper and carbon lip, with a custom front lip guard to keep it safe from damage, and there’s a matching CSL diffuser at the rear. The difference with this car, though, is that all four arches have been rolled and pulled, and while this is a very subtle modification, it serves to give this M3 that a slightly more muscular stance and just that little bit more presence, and it makes all the difference. 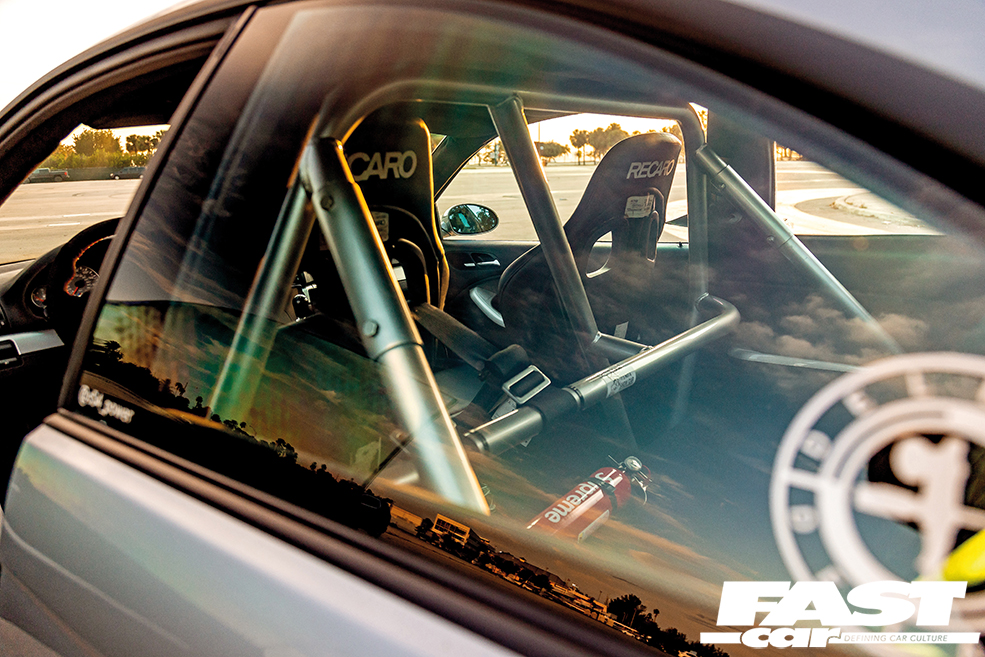 There’s nothing subtle about the interior, though, and Eumir has created his perfect driver-focused cabin, which gets to the point and looks good doing it. Up front sit a pair of Recaro SPG XL single-piece buckets that have been reupholstered in black Nappa leather, and they have been paired with Simpson Racing five-point harness. Eumir made the custom rear seat delete himself, and it’s wrapped in Roll-Royce suede for that luxury touch, and the rear of the cabin is now occupied by a Kirk Racing half-cage. Up front, there’s a minimalist steering wheel devoid of any buttons, trimmed in Alcantara and finished with a red centre stripe. Eumir has also added a CAE short-shifter and a CSL carbon centre console, while the trim pieces have been custom-painted. Finally, because there’s no need to lose all your creature comforts, there’s a touchscreen head unit, new HK speakers and a 10” sub so that Eumir can enjoy his in-car entertainment when he’s cruising the mean streets of Miami. 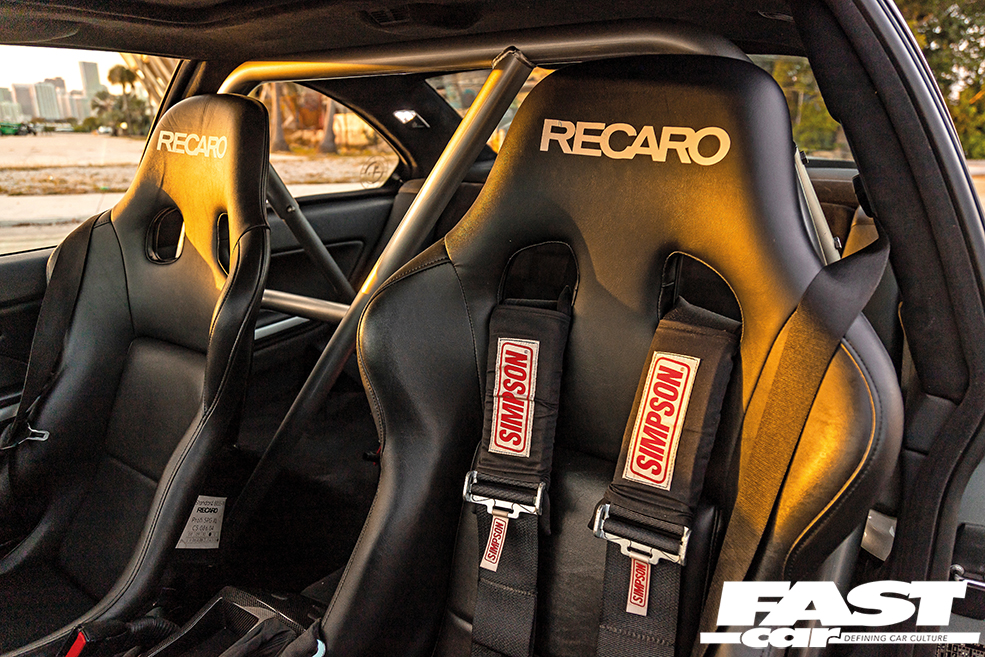 After so much work and effort poured into this build over seven years, asking Eumir about his favourite mod almost seems a little unfair, but he doesn’t hesitate. “Currently, my favourite is the 4.10 differential I recently installed. It really woke the car up and added a lot more snap that it already had, but it’s just so much more intense,” he grins, and it’s no surprise that in a build that’s all about driving thrills, it’s that mod that gets the biggest thumbs-up.

As impressive and comprehensive as this build may be, and as much time as Eumir has spent on it, it’s not finished just yet. “I have a few more things to do to ‘finish’ it, which we know never ends,” he laughs. “Very soon, I will add the finishing touches on the car’s body and interior, which are the CSL carbon roof and CSL door cards,” he says, and we know full well there’s going to be more beyond that. All those years ago, seeing that E46 M3 in the workshop inspired Eumir to buy and build one, and seeing the sensational result of all his hard work here might well inspire someone else to crave and create their perfect M3 one day. We certainly hope it will because modded BMs don’t get much better than this. 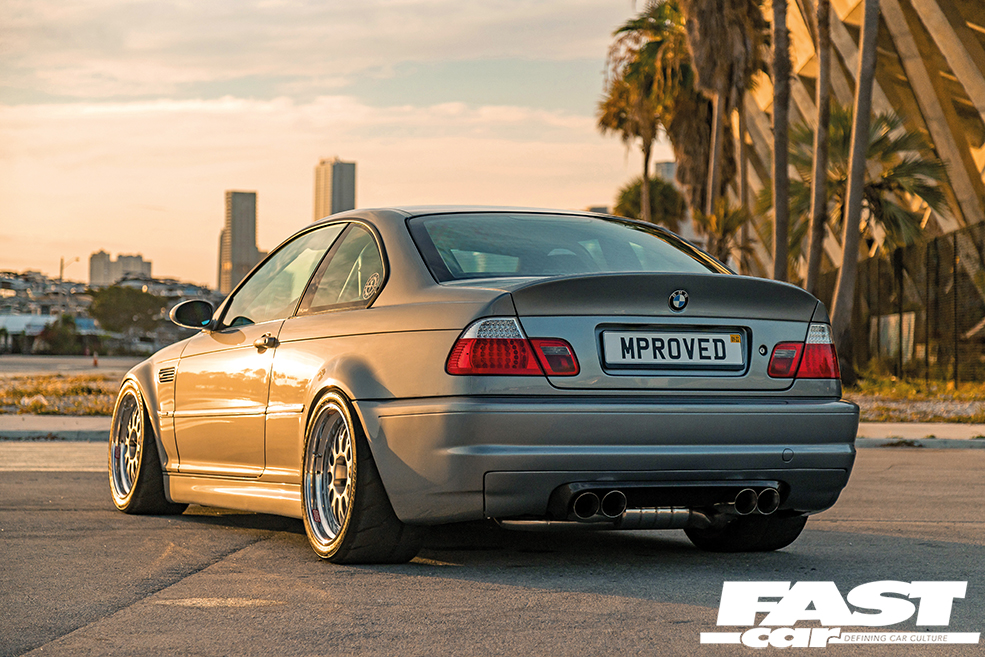