Part musical, part morality play, and one of the best car-chase movies of all time, “The Blues Brothers” turns 40 years old this year.

It debuted June 20, 1980, and today “The Blues Brothers” is remembered for cementing John Belushi’s status as a comedic star and for elevating the Black art form of blues—all through the antics of Belushi and Dan Aykroyd, who gave Nazis their due while they reveled in vehicular destruction.

The plot centers around Jake and Elwood Blues, a pair of recidivist ne’er-do-wells raised in a Chicago orphanage run by a stern nun (“the Penguin”) seemingly imbued with supernatural powers. Upon Jake’s release from prison, the duo visits the orphanage and discover it will soon be shut down because it owes $5,000 in back taxes. The brothers decide to get their old blues band back together to raise the tax money and run afoul of the law and Illinois Nazis along the way. On what they view as their mission from God, they’re chased by legions of cops, the military, the National Guard, a SWAT team, and the Nazis, creating wanton destruction in their wake.

Director John Landis made the scale of the movie part of its humor. Go big, break the budget, and watch your two antiheroes best the nearly unstoppable forces amassed against them during and between musical numbers. The automotive mayhem dovetailed into that neatly: According to CarThrottle, 103 cars were wrecked while making the movie. 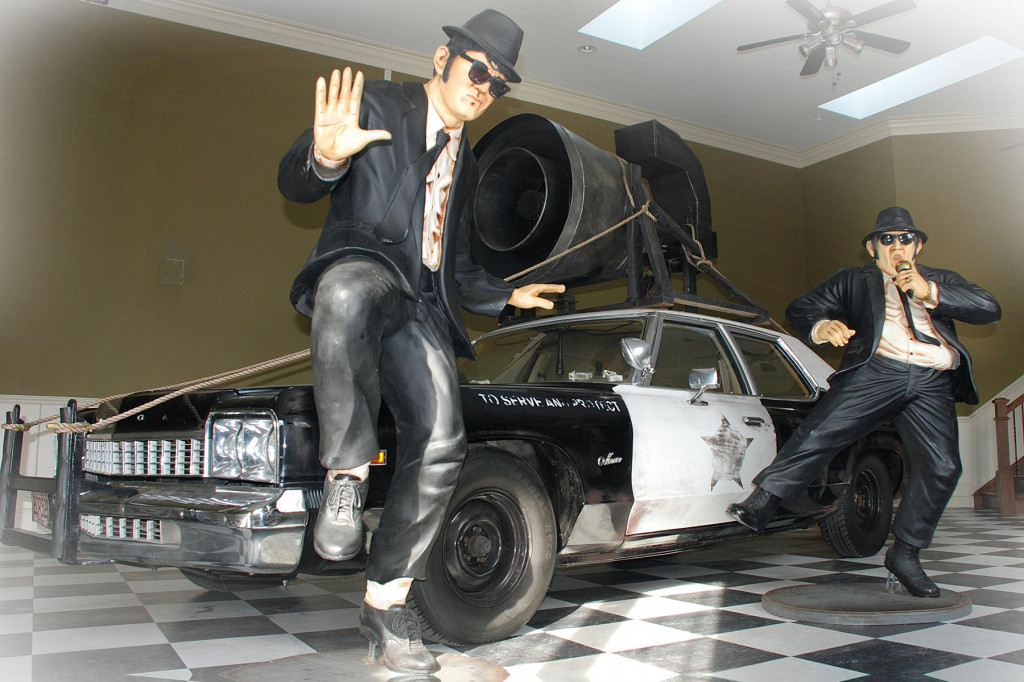 “Part of the joke with ‘The Blues Brothers’ was size,” Landis said in a behind-the-scenes look at the movie on the film’s 25th anniversary DVD. “The distillation of my concept of ‘The Blues Brothers’ could be Daley Plaza, where the masses of the law are just congregating. This huge concentration of power and military might coming down on these two little guys in the elevator.”

Landis was referring to the end of the movie when a 106-mile car chase ended in downtown Chicago. The city of Chicago and the state of Illinois muster all it can to catch Jake and Elwood Blues on their run from the successful concert that raises the money needed for the orphanage. “Use of unnecessary violence in the apprehension of the Blues Brothers has been approved,” a police dispatcher deadpans during the chase.

“John Landis directed this move as General Westmoreland might prepare a battle,” Henry Gibson, who played the lead Illinois Nazi, quipped on the DVD commentary.

The crew plotted the movie’s chase scenes in its “war room,” with maps of Chicago, aerial views, and scale models. The crew coordinated to shut down city streets on Saturday and Sunday mornings with the police and fire departments, and a production assistant with a walkie-talkie was stationed at every alley and intersection to make sure nobody walked out into the carnage.

And Landis did his best to make the car chases realistic—a hazard to any passersby.

“We had great drivers. The doubles for Belushi and Aykroyd were Tommy Huff and Eddie Donno, and Tom Huff was a brilliant driver. And what we were doing in that movie that was unusual was we were going that fast,” Landis said. “I mean we had 34 cars going 110 miles an hour in downtown Chicago. I don’t think you could do that again.”

They were lucky to be able to do it at all. Former Mayor Richard J. Daley prohibited filming in Chicago after a scene in “Mod Squad” depicted a Chicago cop taking a bribe, according to Landis. But Daley had died in late 1976, and Jane Byrne was the new mayor in 1979 when the film was shot. She not only allowed the filming but also the city of Chicago set up a film office for the movie that was responsible for luring future film and TV projects to inject new money into the city’s economy. Since “The Blues Brothers,” there have been more than 1,100 films and TV shows shot in Chicago, according to the Chicago Film Office.

At heart, it was a movie about Chicago, filmed in Chicago, about Chicago blues. Filming on location spanned much of what is now considered greater Chicagoland, but 40 years ago the area it defined was separated by more than 100 miles of farmland, from Joliet to the west, Calumet City (which borders Indiana) to the south, all the way up to Wauconda, near the Wisconsin border to the north. In one key scene, Milwaukee, 85 miles to the north, even subbed for Chicago.

Aykroyd is a car guy. According to Landis, the character of D-Day, who turned a 1966 Lincoln Continental into the Deathmobile in “Animal House,” was based on him. “Danny’s idea of a good time was to get in his car in Los Angeles and drive to New York straight,” Landis said.

Aykroyd certainly talked the talk, both in “The Blues Brothers” and when talking about the movie.

No car enthusiast can forget Elwood informing Jake of the charms of a certain 1974 Dodge Monaco: “It’s got a cop motor, a 440-cubic-inch plant. It’s got cop tires, cop suspension, cop shocks. It’s a model made before catalytic converters, so it’ll run good on regular gas. What do you say? Is it the new Bluesmobile or what?”

Aykroyd, who wrote the original script that was later cut down by Landis, chose the Bluesmobile for a reason.

“At that time the hottest police car in America was the Dodge Monaco with the 440-cubic-inch engine. And that became the Bluesmobile because Elwood knew that he had to stay at least, if not one jump ahead of the law at least, you know, on the same kind of technological footing with them,” Aykroyd said in the DVD commentary.

Aykroyd’s original script included a scene that explained how the Bluesmobile was imbued with special powers. It was parked under the El tracks near a transformer and it absorbed that power to allow it to do jumps and flips. Landis shot the scene but cut it from the theatrical release, arguing that the car’s abilities needed no explanation. Viewers could also interpret the car’s stunts were supernatural, just like the Penguin’s ability to glide back into her office.

In the chase scenes, the Bluesmobile bests all comers, police and Nazis alike, then falls apart all at once just as Jake and Elwood reach their destination: Daley Plaza where the Cook County Assessor’s Office can take the tax payment for the orphanage.

It’s the chase, not the destination

For lovers of “The Blues Brothers,” it’s all about the journey as much as the destination, or the chase instead of the journey. Two notable chase scenes make that journey much more fun: the pursuit through and complete destruction of a shopping mall and the run from the murderous Illinois Nazis.

The Dixie Mall in Harvey, Illinois, which is south of Chicago, had been abandoned about a year before film production began, and it served as a perfect backdrop for Aykroyd’s wild idea. The crew filled the parking lot with mostly new cars, and re-created the stores inside, borrowing the merchandise (anything destroyed or stolen had to be paid for). Stunt people filled the mall as customers, and then the crew set about destroying what it had built to the music of Otis Redding’s “Can’t Turn You Loose.” Matter-of-fact lines like Jake pointing out “disco pants and haircuts” or Elwood noting “new Oldsmobiles are in early this year” only made the wanton destruction more joyous.

The abandoned mall stood for another 32 years before it was demolished in 2012.

Later, the Illinois Nazis pick up the brothers’ location by monitoring police scanners and set off after them in a pair of Ford wagons, an orange Pinto and a green LTD. This time the music isn’t blues. It’s Wagner’s “Flight of the Valkyries,” a classical piece that adds drama, grandeur, and ironic humor to the scene. Though the chase begins in Chicago, it ends up in Milwaukee so the production could use what was known at the time as “the bridge to nowhere.” A planned northern extension of the I-794 spur in the heart of Milwaukee was started but never finished.

The unfinished bridge provided the perfect setting for some of that Bluesmobile magic. Confronted by the end of the road after throwing a rod, the Bluesmobile stops short of falling off the bridge. You can see the extra structure the crew added behind the front wheels so the front tires could teeter off the bridge as the car comes to a stop.

In a physics-defying move, Elwood jams the car into reverse and it does a backflip with a twist to escape as the unsuspecting Nazis fly off the bridge.

This is where the fabric of space-time warps two more times and leaps further into pure fantasy. The bridge in Milwaukee was maybe 40-50 feet high but the Pinto fell 1,200 feet in Chicago, first headed toward the peninsula where Chicago stores its winter road salt (where the car was actually dropped). Then, somehow, it ends up smack dab in the middle of a city street. The LTD follows on top of the Pinto to add injury to injury.

According to film producer Robert K. Weiss, the Pinto was dropped from a helicopter so the fall could show off the Chicago skyline. A drop that high meant the Pinto had to be certified by the FAA for its lack of airworthiness because the agency was afraid it could act like an airfoil and sail over city streets. The crew had a 50-by-50-foot target and the car hit the mark on the first try, folding up like an accordion as it met the earth.

“Elwood is a genius driver,” Landis said. “He does extraordinary things with his car.” Elwood’s ability to escape is tinged with a magical realism that gives the movie a grand style.

The massive machine the antiheroes were up against and the genuine joy their music provided made it easy to cheer for them and view the destruction they wrought as comedic rather than criminal. Jake and Elwood played David to the law’s Goliath. Landis made it all funnier by going big, which turned “The Blues Brothers” into the most entertaining car-chase movie of all time.