How do you make even a modified Ford Mustang look like a seven-stone weakling? Buy an extremely rare SVT Cobra R.

Jason the photographer snaps away at an angry-looking bright red Mustang, which sits for the moment deathly quiet – but still menacingly – in the corner of an Essex industrial estate. We pinch ourselves to check what we’re looking at is real: build number 252 of just 300 SVT Cobra Rs supplied worldwide as a 2000 model, and bone stock as it left the Dearborn, Michigan factory over 20 years ago.

“Maybe it’s just ripening enough to become more desirable”, shrugs the owner Peter Gale, “but if not, I don’t mind. I didn’t buy it as an investment, I bought it because I love it.”

Peter is the archetypal Mustang fan – in that he was inspired at an early age by a loud, brash car, which stuck with him ever since.

He explains, “When I was a child we lived in the USA for a while. My dad bought a Fox body GT and used to pick me up from school in it on Fridays. I loved everything about that car, and have been fascinated with Mustangs ever since.” 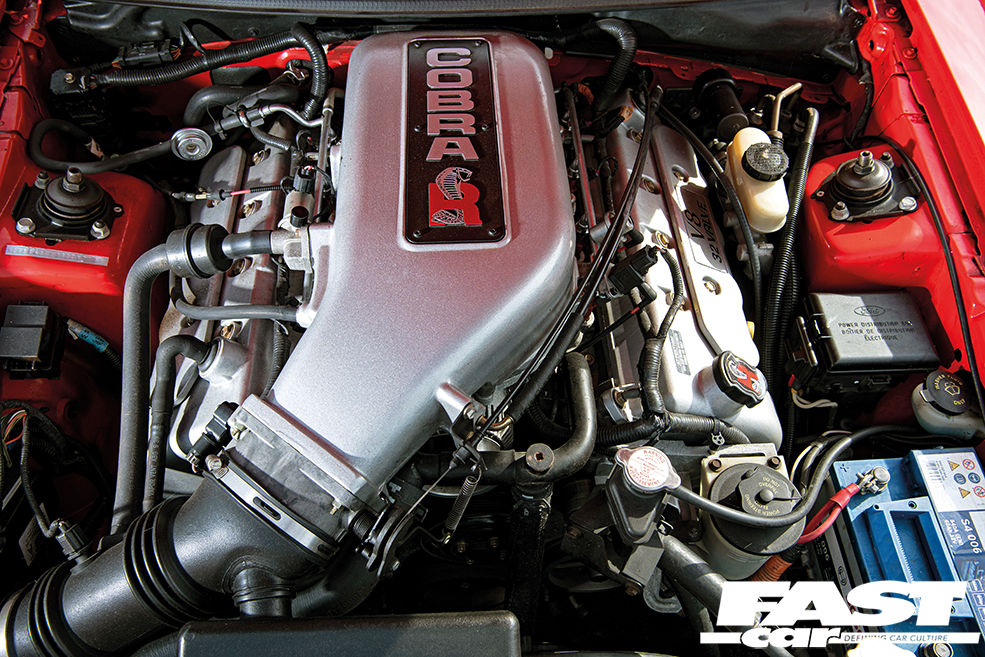 A 7.0-litre ’69 GT scratched that childhood itch quite nicely, and a brand-new 2015 GT was being pressed into service and enjoyed until a fateful browse of the internet. Like many of us, Peter loves a sneaky peek on Autotrader and Pistonheads of an evening, and one such evening he came across something quite special.

He says, “The advert said it was an SVT Cobra R, it was 30 minutes down the road, and I simply couldn’t believe it was a genuine one. I was convinced it was a replica.”

Thankfully, when he viewed the car it was all correct, and all of the original paperwork was present to prove its provenance.

But anyone who knows their Mustangs will agree that Peter made the right choice – the Cobra R was a genuine Ford Special Vehicle Team (SVT) product, designed from the ground up to give road drivers a racing car experience, and racing drivers the perfect base vehicle to take on track and win with very minimal changes. Think of it a bit like the GT3 RS or Challenge Stradale of the Mustang world and you wouldn’t be far off; that’s how OCD the SVT engineers really went in making this Cobra R the most visceral Mustang driving experience yet. 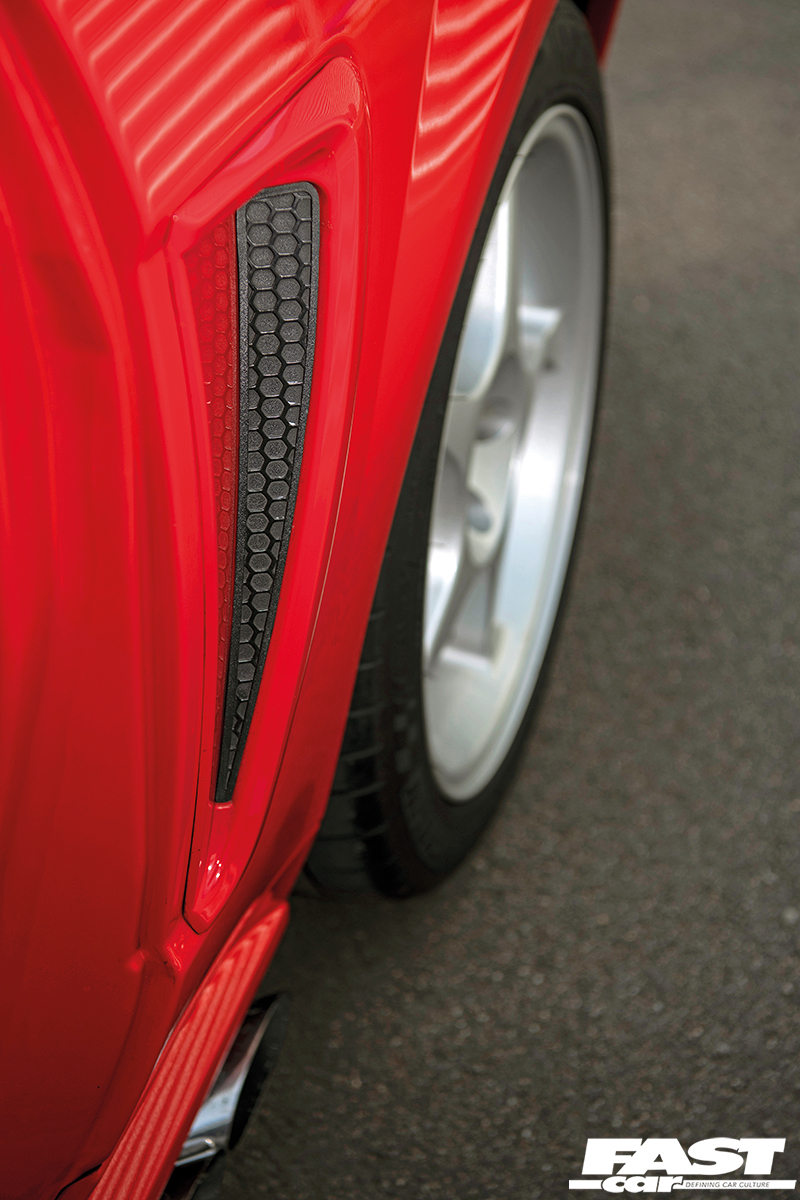 Peter smiles, “The thing that hits you most is just how raw it is. SVT removed the radio, air-con, cruise control, rear seat and most of the sound deadening. It’s so exciting, but it’s pretty full-on – after a three-hour trip to Ford Fair I admit that I was exhausted.”

A cruising grand tourer the Cobra R definitely is not; indeed, everything is honed for maximum driving dynamics, starting with the hand-built engine.

SVT started with the 5.4-litre Ford Triton cast-iron block, usually fitted in F-150s and Expeditions; the engine is so tall that not only did the crossmember and engine mounts have to be lowered to fit in the Mustang, the bonnet had to incorporate a huge bulge to cover the intake manifold.

A forged steel crank, forged rods and pistons, ported heads and wild cams added up to 385bhp and 385lb.ft at the crank… officially. Several independent rolling road tests have found these cars to make similar figures but at the wheels, meaning the crank figures were originally understated by Ford. 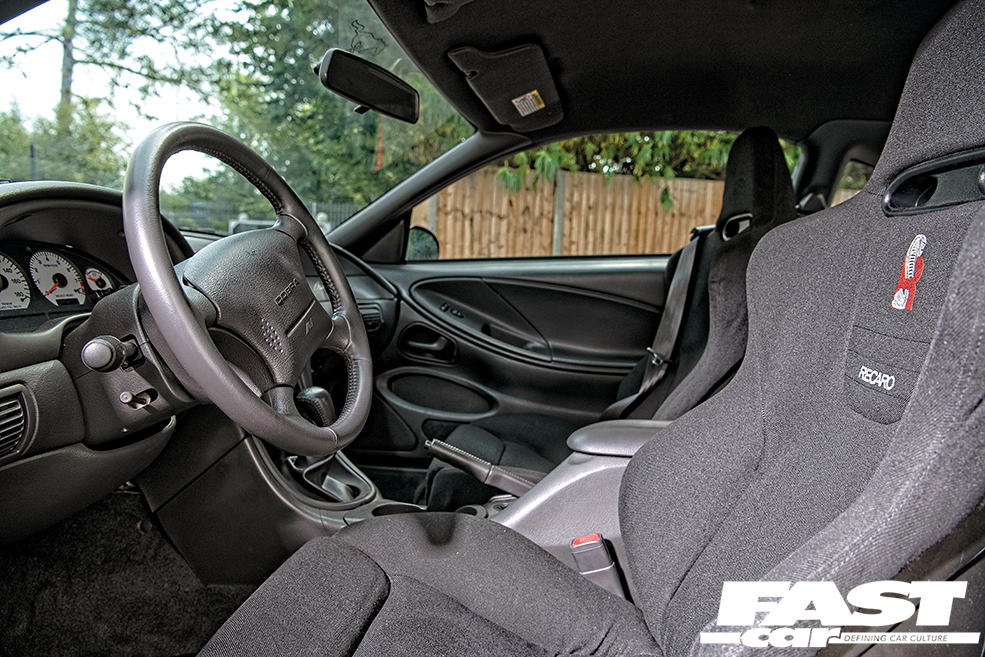 A baffled oil sump hints at the racing DNA, as does that huge fuel tank hanging underneath the car. Measuring 75 litres, it enabled American Trans-Am road racers and endurance racing teams to go for more miles between refuelling, plus being a properly bladdered and baffled fuel cell it passed FIA safety regs. But the tank did cause a problem: it made fitting a conventional rear-exit exhaust system impossible. Famed exhaust manufacturer Borla came to the rescue with very loud and very ostentatious twin side-exit pipes, which in hindsight just add to the quirkiness and uniqueness of the car.

Getting all of that instant, raw power transmitted to the fat 265-section rear tyres is a trusty Tremec six speed gearbox and an LSD. Both were played with by SVT, and contain shorter ratios and a shorter final drive respectively compared to the shopping Mustang. The end result is a more buzzy and responsive driving experience, and a greatly enhanced accelerative punch – the red rocket can reach 60mph from zero in 4.4 seconds, yet despite the short gearing still marches on to a 177mph top speed.

As the saying goes, though, power is nothing without control. For the handling and stopping, SVT cleverly partnered up with BF Goodrich, Eibach, Bilstein and Brembo to call upon decades of road-racing experience and gain access to invaluable data to fine-tune the driving dynamics.

The car received 1.5in lower springs at the front, and 1in lower at the back, with spring rates increased from 500lb to 800lb and 470lb to 750lb respectively. This enabled the sticky-compound tyres to work their magic, and endowed the Cobra R with watershed 1G cornering ability. Indeed, Motor Trend magazine’s road test of the day wrote ‘high-speed laps on a Texas racetrack revealed a friendly, forgiving car that drifts at wide-open throttle precisely to the track’s edge, lap after lap, and answers steering corrections with surgical accuracy’. 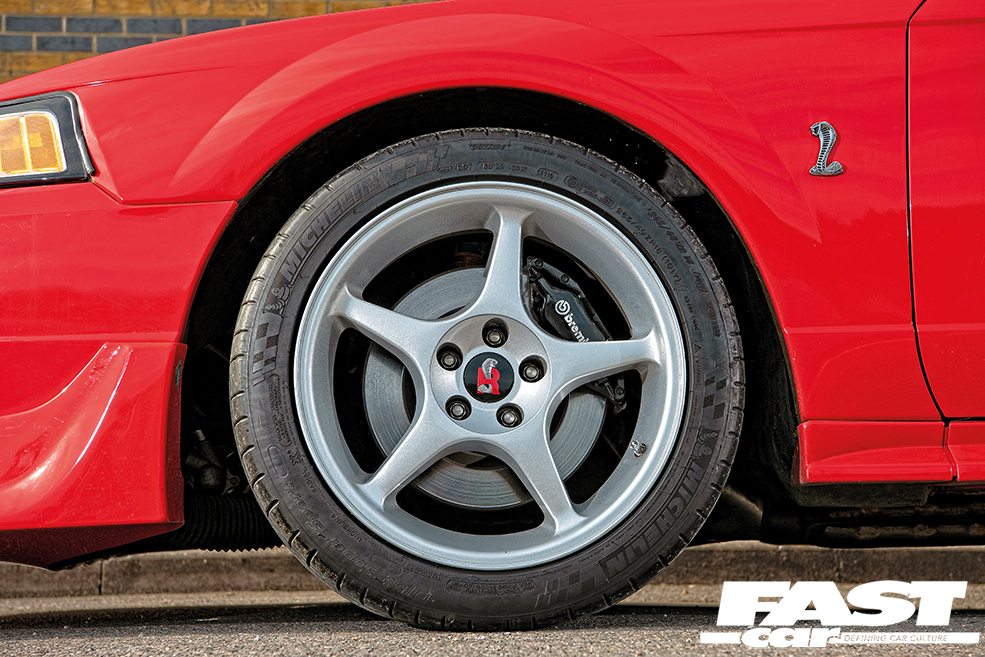 The car seemed to herald a new dawn in Ford’s muscle car dynamics. As Peter talks further about the evolution of the Ford Mustang, we agree that the 2000 SVT Cobra R may represent a significant turning point in the marque’s history.

He says, “Having owned a classic Mustang, an S550 Mustang and now this, an argument could be made that the 2000 Cobra R marks the point when Ford turned from simple muscle car formulas to incorporating modern technology and sharpening the entire feel of the Mustang as a serious driver’s car.”

He may be right: this was a very different animal to what had come before it, even compared to Rs of years gone by. All Mustangs produced since – even base models – have displayed sharp handling, intuitive steering, and come very well equipped for spirited driving out of the factory.

So how close did Ford get to creating the perfect Mustang driving machine with the 2000 Cobra R?

Peter says, “I think they nailed it. You can tell that SVT really obsessed about every detail on the car, and it shows the moment you sit in the Recaro seats and start the engine.”

But what’s it like to live with? “Touch wood, I haven’t had any issues with it. It’s only got 10,000 miles on it and I haven’t messed with it as it’s so unique – I just maintain it well and enjoy it as SVT intended.” 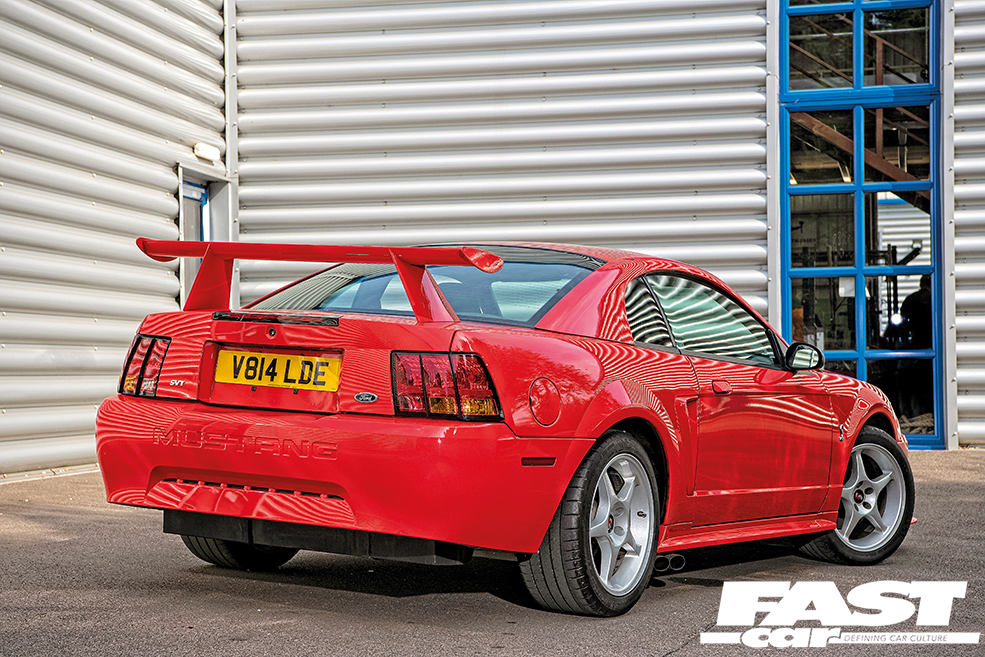 This means sunny Sunday drives out with his twin daughters, Amelie and Florence (“They call it ‘their’ race car,” laughs Peter), and going to more car shows with his dad, who owns a Mk1 Focus RS.

When Peter took the car to Ford Fair, he parked in a far-flung corner away from the crowds. Once the show had finished, he walked back to find a group of youngsters crowded around and waiting for a chat.

Peter remembers, “They asked me if it was mine, and then they asked if it was a real SVT Cobra R. I couldn’t believe it but they knew all about the model, the history, and the specs.”

Turns out, the SVT Cobra R was featured in the Forza Motorsport computer game, and the young fans had been inspired by the presence, noise and performance of this special Mustang, even in the virtual world.