Racing liveries have been a strong influence on Liam’s life for a long time. As a teenager, he had a white Cobra with blue stripes pinned on his bedroom wall. Little did he know then that those American national racing colours would return to feature in his real-world car life 20 years later.

With no particular family marque loyalties at work in the background, and after dabbling with a couple of Renaults, Liam’s car-life turned increasingly to performance-oriented Fords. But even then, Liam liked to take his own path and not follow the crowds, starting with a purple Probe, followed by a V6 Cougar.

Also increasing over time were the levels of mods and upgrades fitted to his Fords, but eventually the need for sensible family transport inevitably led to a more conservative Kuga. 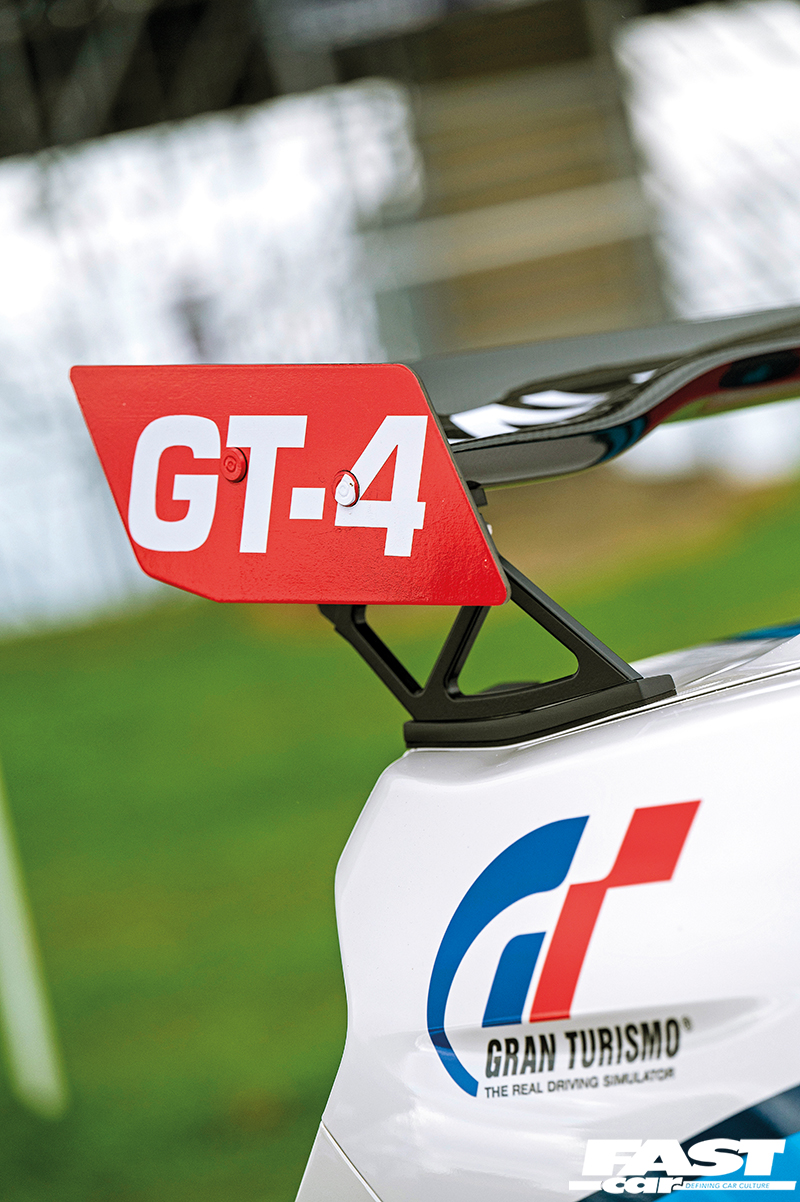 After a period of two-wheeled leisure and pleasure riding, Liam returned to a fast Ford in the image of his influential bedroom-wall poster. As Christmas 2020 approached, Liam was checking out a rich vein of high-spec German SUVs as the next source of his motoring excitement. What he didn’t know was that while his wife was encouraging his search, she was on the trail of something she knew would make all of his Christmases arrive at once. Operating under his radar, she had stealthily sourced an ultra-low mileage, white-with-blue-stripes Mustang GT through the Ford dealer network.

It was a deliciously timely find, as this was mid-pandemic and just before used-car prices escalated. With only 200 miles on the clock, the Mustang was almost as it had left the assembly line. The previous owner had tastefully added a lip spoiler and the blue US national racing stripes before deciding that the car was too young for his years. 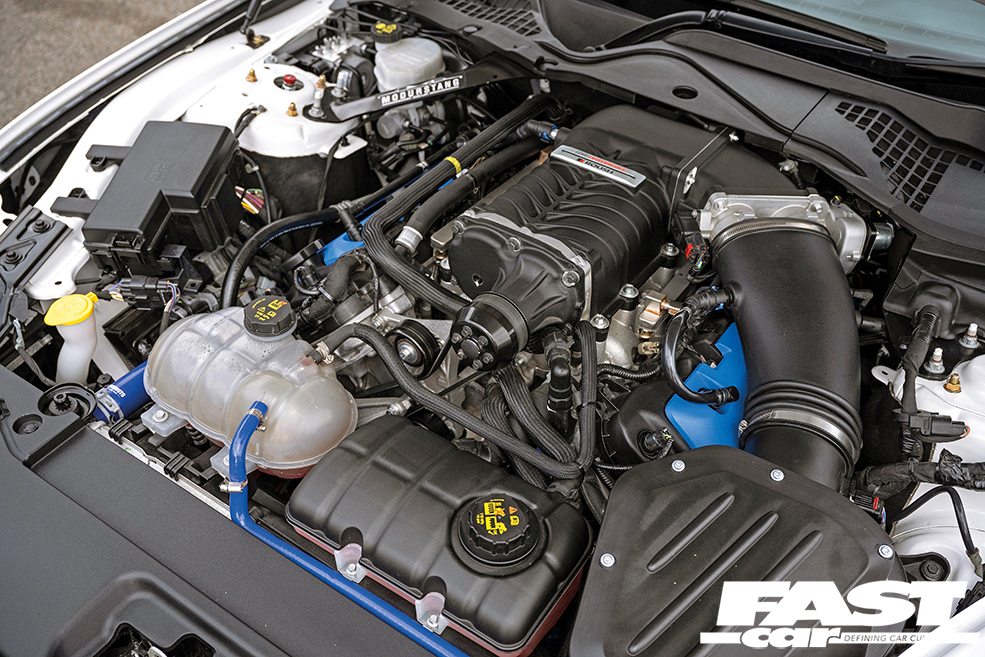 For Liam, this was his dream car; his bedroom-wall poster car fantasy had come true. Hard to imagine, given the car you see on these pages today, but at that point Liam didn’t want to change a thing, other than maybe tweaking the steering feel, fitting a GT350R red starter button, and adding a bit more exhaust growl through an appropriate axle-back exhaust.

Liam says, “That was it. I didn’t plan to go radical, the car as it arrived was just perfect.”

That was until his younger brother showed Liam a Martini Racing-liveried image he’d seen while playing Gran Turismo 4 on his PlayStation. Liam was smitten by the idea of creating a unique real car out of a virtual world concept. 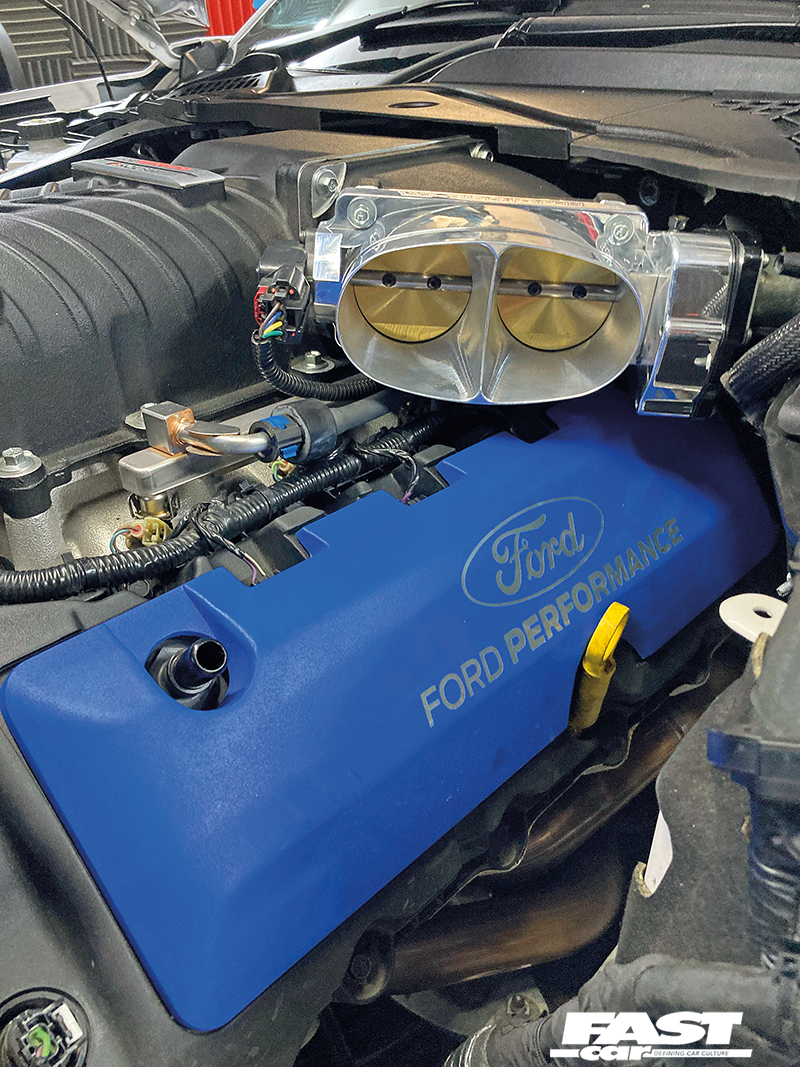 He also realised that keeping the car stock under that livery would be unbalanced and that he needed power and chassis mods to match the implied claims of its livery. He wanted the car to be all of ‘one of one, perfect and unique’.

He says, “My little brother was a bad influence but he was also the best influence.

“If I was turning a PlayStation racing simulation into reality, then I wanted the car to have the performance to match. I have ended up with a road-legal missile that loves to run down supercars.”

Liam tackled his own contact-point mods – like the custom steering wheel, gearknob, bonnet and boot-lift struts and deck lid. 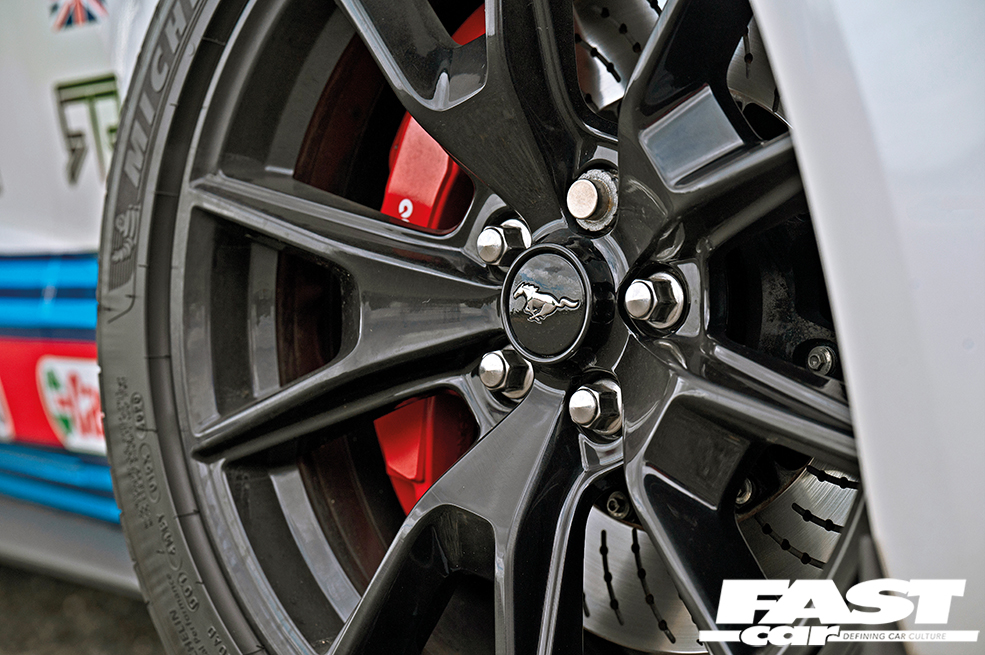 Not everything went smoothly, as Liam recounts: “While fitting my blue coil covers at night, I was using my daughter’s bike light to illuminate the engine bay. I placed it next to where the fender mounts to the body, not seeing the huge gaping hole right behind it. I knocked the light down the hole and I now have my daughter’s light magnetically attached as a permanent addition to the inner wall of my fender.”

Wisely, Liam left the oily modifications to the professionals at Modurstang and Motorsport And Performance (MAP).

Starting with a supercharger, a series of power and handling-related mods began, which put the car at the extreme end of road-going Mustangs in the UK. 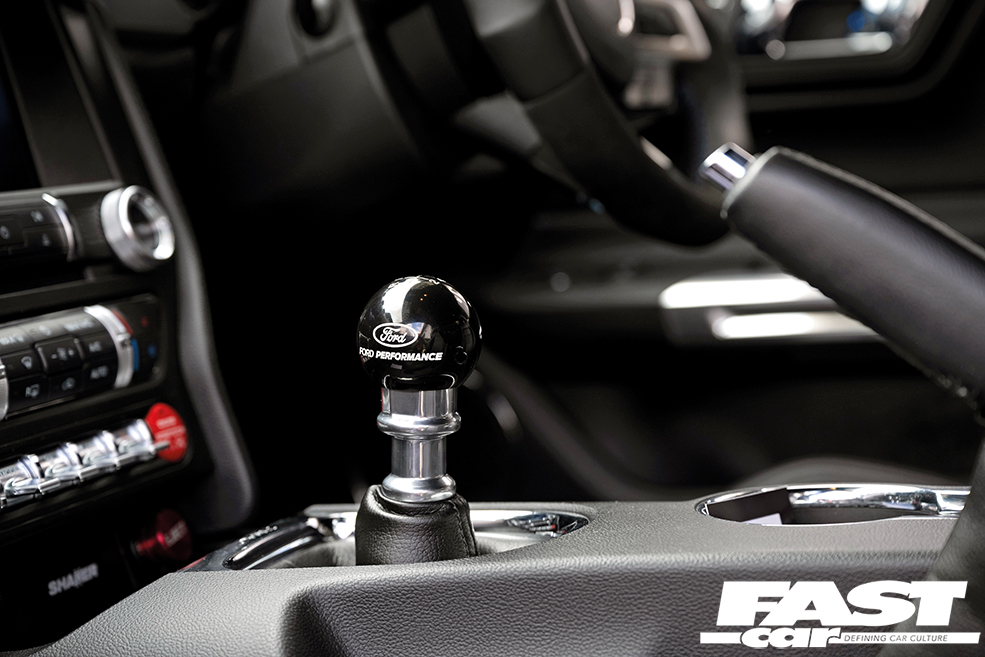 Liam has yet to accurately ascertain the car’s key bhp and torque numbers. First, because he hasn’t finished with the tuning; since our photoshoot he’s added larger injectors, a twin throttle body, a JLT intake kit, and a smaller supercharger pulley. It all needs recalibration and validation on the MAP dyno, which was put on hold due to the lack of 99 RON fuel during the petrol shortages of October 2021.

The previous spec saw 713bhp at the wheels, so we can comfortably assume the power is now well over 800bhp. Given the pace at which Liam has relentlessly pushed forward, by the time you read this, the Mustang will no doubt be fully tweaked, and Liam is aiming for as close to 900bhp as he can get. 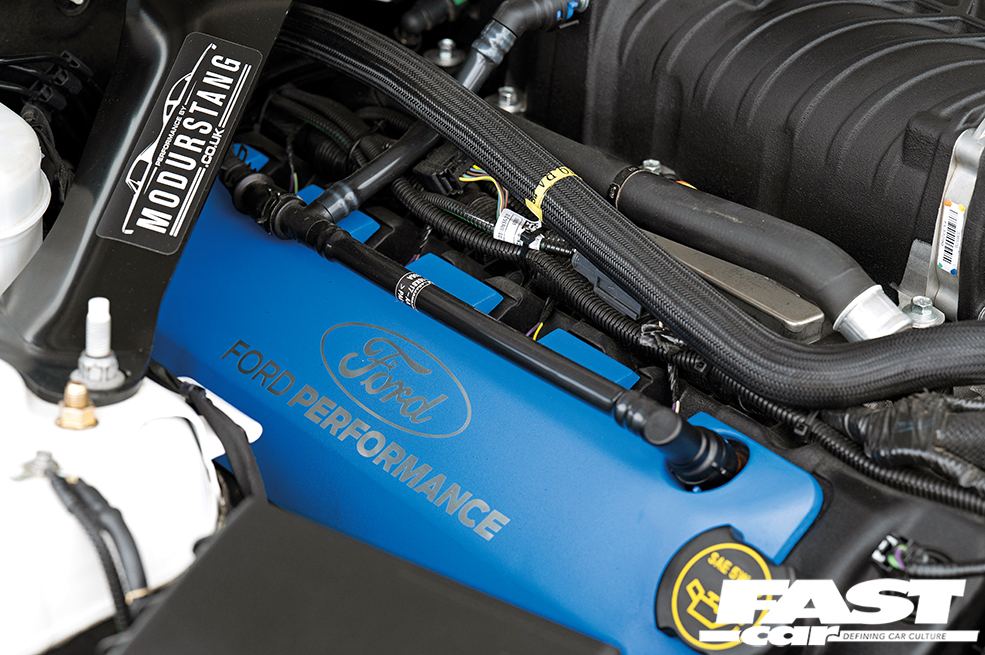 Intriguingly, Liam’s supercharged S550 Mustang has ended up with two sets of rear callipers as a result of retaining the small OEM rear pair for the handbrake function, with rear stopping power now provided by six-pot Brembos.

This car is no garage-queen, as Liam has already taken it to several major UK events: Pure Ford at Castle Combe in Wiltshire was the car’s first Ford community appearance and included some useful demo laps, which confirmed the integrity of some recent upgrades. Meanwhile, a trip to Ford Fair at Silverstone confirmed the positive public acceptance of his ambitious project. 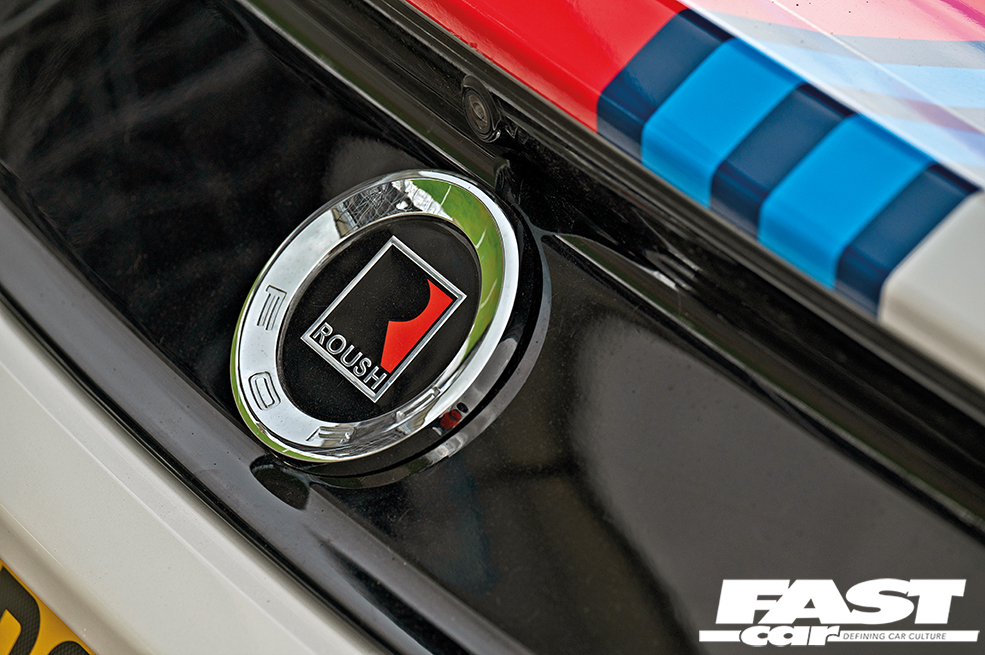 Since the Silverstone photoshoot, Liam has also acquired a set of Mustang Mach-1 Y-spoke wheels from a fellow Mustang owner.

Liam is looking forward to seeing what his car can do on his local track, Cadwell Park, but for now is enjoying the sound and feel of its amazing acceleration.

He grins, “It turns heads everywhere I drive it and it’s always having people take photos of it or with it”. 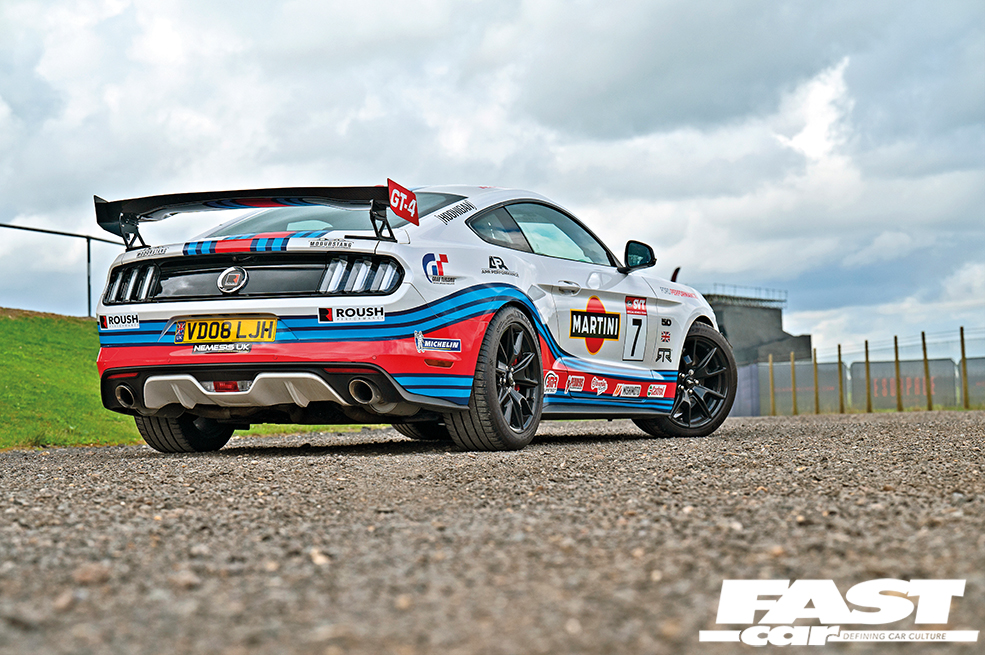 From a computer-generated image that captured his attention, Liam’s supercharged S550 Mustang has become a real-world example of that vision, and it’s capturing the attention of car fans all over the country.

Having close to 900bhp to back up the visuals doesn’t harm things, either. A real-life Gran Turismo Ford…