Dripping in carbon fibre and bristling with power, this supercharged Honda S2000 is whirling through a transition from track car hero to show-stopper.

The essential problem with human existence is that nothing lasts. All of our achievements, no matter how seemingly significant, will ultimately boil away into dust, the base elements returning to the cosmos from whence they sprang forth. It’s a truism to say that our lifespans, when taken as a percentage of the Earth or the universe as a whole, are so mind-bogglingly insignificant that there’s no purpose whatsoever to anything we do, but at the same time this little pocket of near-nothingness that we inhabit is still our nothing. It’s mankind’s prerogative to make things better for that brief flash of time in which we get to enjoy them, and it’s for this reason that great and inspiring art has always characterised man’s achievements; why architecture is often beautiful as well as functional, why clothes are colourful instead of drab and uniform, why food is tasty and pleasing to the eye rather than merely fuel, and why we build silly cars. We don’t need to spend all this money on making our cars different. But who ever cared about ‘need’…? 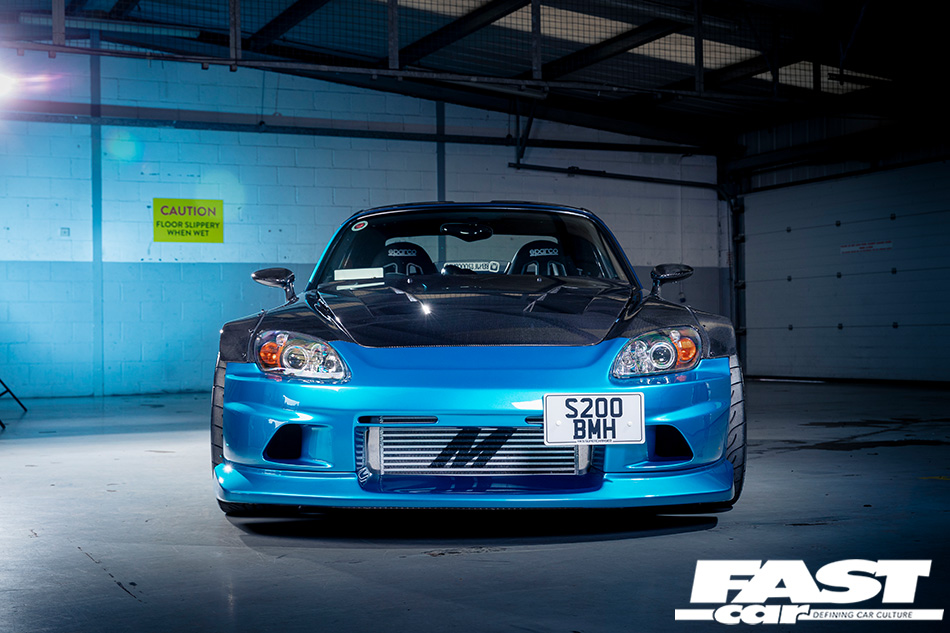 It’s because of all this cosmic back-and-forth that James Waterfield created the AP1 supercharged Honda S2000 GT that you’re now gawping at with undisguised animal lust. (Seriously, put your tongue away, people are looking.) James has a pretty clear idea of the nature of the cosmos and his own infinitesimal position within it, and it’s his overt aim to maximise that speck in any way possible. We’re going to start this story with a massive spoiler – no, not that kind of spoiler – and tell you that the tuned S2000 he built is not what you see here. The same car, yes, but totally different specification. The world knew his Honda, and it was good. And then, like Keyser Söze, it was gone.

James’s vision was to reimagine the celebrated Japanese roadster as something of a ’Ringmeister, re-engineering it for prowess on the Nordschleife/Nurburgring. However, in early 2020 he sold it to a friend, Ben Hoswell – the car’s current owner, who decided that it was way too clean an example to be thrashing around on track. Ben had plans. He had ideas. He also had a propensity for getting a bit carried away. 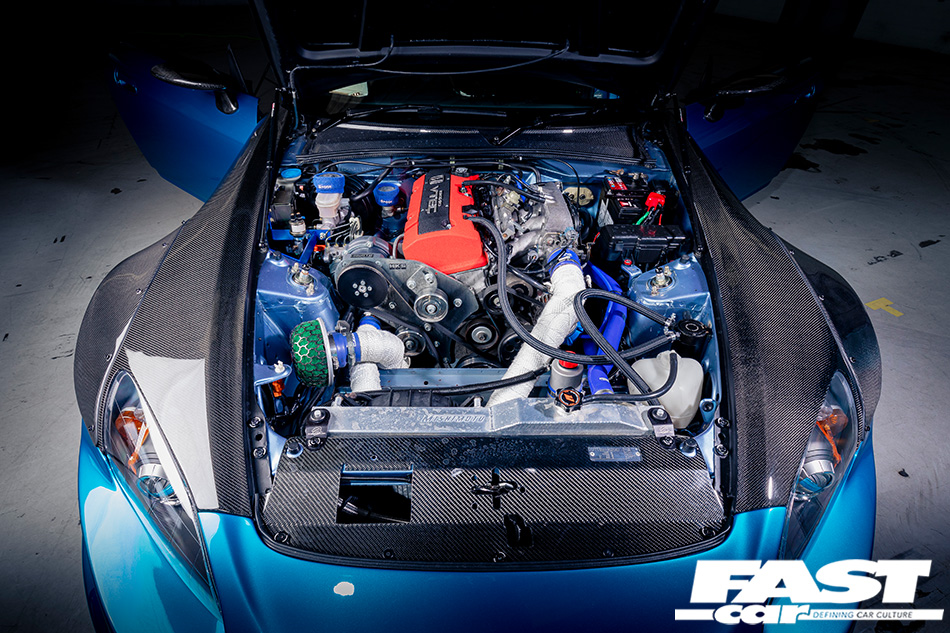 “Although James had already done a considerable amount of work to the car, I decided it needed a fresh coat of0 paint,” Ben grins. “However… that soon escalated into what you see here today! Upon breaking the car down for prep, I decided to completely change the colour. The chosen shade is Atlantis Metallic, taken from a 2018 BMW F80 M3. Between me and a friend (Pool Panel and Paint) we soon gave the car a new lease of life. The exterior modifications then started and never stopped…”

It’s fair to say that Ben pursued something of an obsessive route when it came to carbon fibre, the first parts to be fitted being a TS-style bonnet and CSL-style bootlid from Seibon, along with a full Circuit Garage wide-arch kit, also crafted from the lightweight weave. This was soon followed by a Voltex carbon bumper and lip, painted body colour to break up the contrast, as well as a carbon scuttle tray, carbon Spoon mirrors, and a Seibon Mugen-style double-sided carbon hardtop. 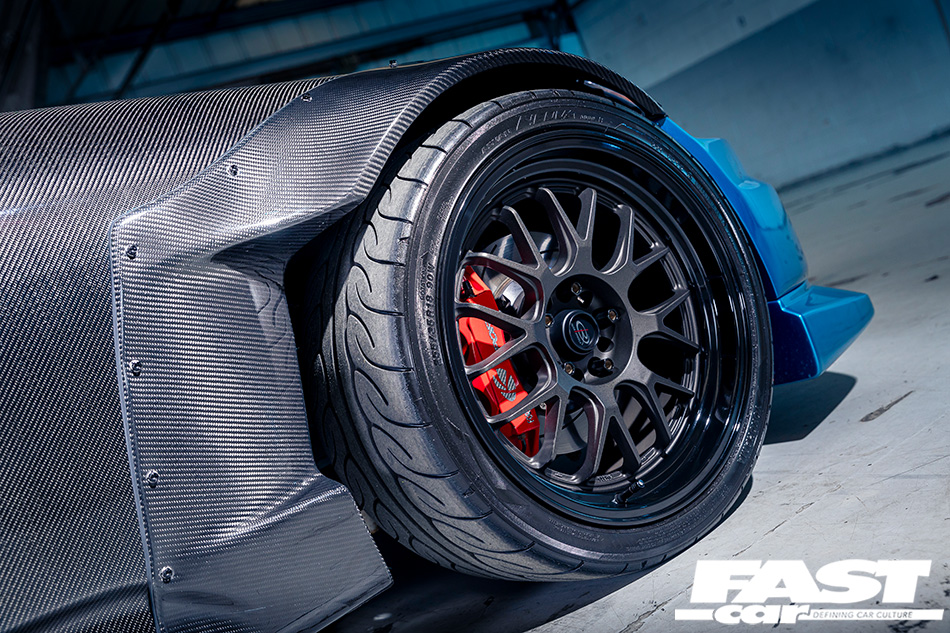 Nicknamed ‘Suki’, the modified Honda S2000 just kept on getting more and more hardcore, and Ben made sure to keep James on hand to develop and evolve the drivetrain – after all, he’d been through it before, and knew it inside out. “The car is running an HKS GT2 supercharger setup with AEM management and fuel system, producing a safe 400bhp,” Ben explains. “It’s got Hardrace braces and arms in the front and back to keep it all tight, plus an 8-pot K-Sport big brake kit and BC coilovers. The S2000’s F20C engine been further upgraded to run a full Mishimoto cooling system including a 4″ core intercooler, and there’s a GReddy RS single-exit cat-back system. 80% of the parts have either been brought in from America or custom-made to get the best quality. I decided to do the AP2 headlight conversion too, and Depo LED taillights, to bring the car into 2022.” 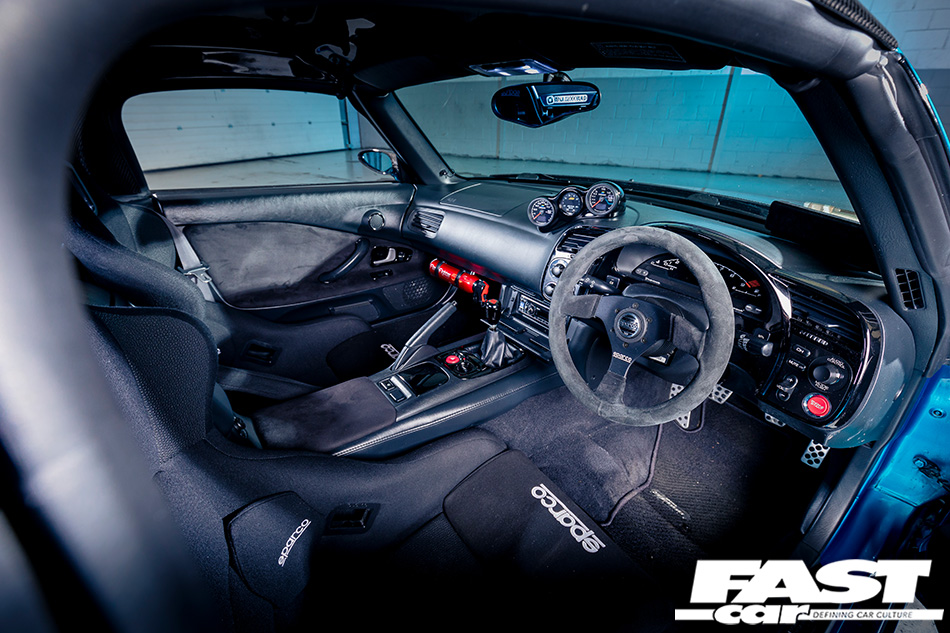 It’s an ever-evolving build, and Ben’s worked hard to ensure that it’s like no S2000 you’ve seen before; engineered for speed and agility, and also carefully crafted to present an on-point aesthetic with a show-winning finish. And every stage of evolution exists as a snapshot in time, before being ousted by the next phase of development.

“Suki is my weekend toy and show car, she stays in my unit and doesn’t ever see the rain,” he says. “Everywhere the car goes, it certainly turns heads – I think it’s mainly the noise, not only does it look awesome but it definitely creates a fine bit of Japanese music. Most people don’t even know what the car is… ‘Is that a Mazda MX-5 underneath?’ is a very common question I get asked! 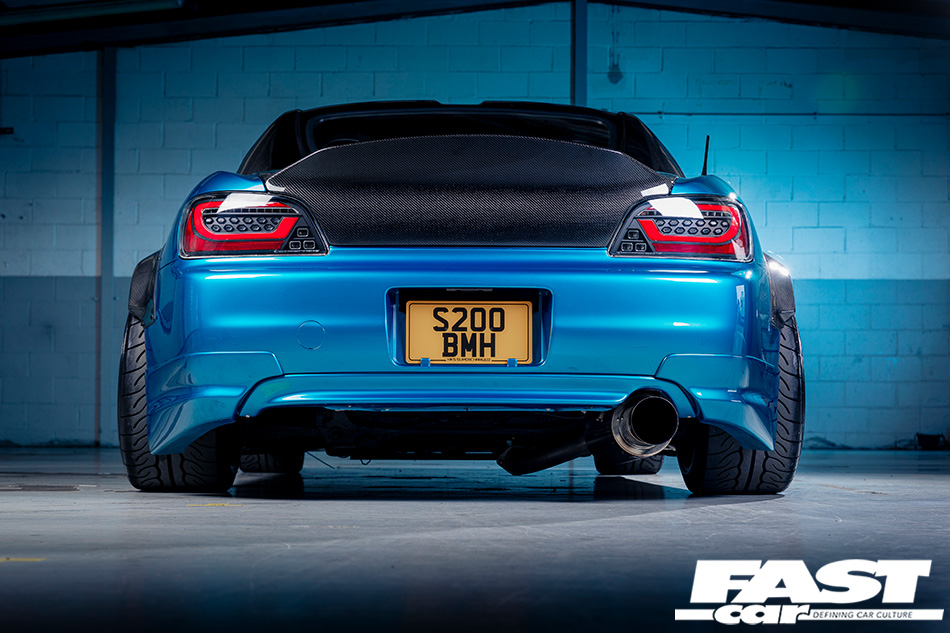 “I’d like the say a huge thanks to everyone that has played any part in me achieving this life goal,” he continues. “The S2000 has always been the reality dream car to own for me, and I’d have never got this far without everyone involved – so yeah, massive thanks to James Waterfield, Pool Panel and Paint, Exoracing, Fiberworx, Tegiwa, Mishimoto, and Dodo Juice. Massively appreciate the consistent support.”

You’ll be unsurprised, of course, to learn that Ben has a lot of plans for the supercharged Honda S2000. The trajectory of this build isn’t likely to lessen any time soon. He’ll be pulling the motor so he can finesse and paint the engine bay, along with painting the head, block and gearbox. The underside of the car will be fully resealed, and all the suspension components are going to be powder-coated. Well, why not, eh? Embrace the transitory nature of existence. So what if nothing lasts? That isn’t something to fear, it’s something to revel in. None of this really matters, just get out there and enjoy yourself. Ben certainly is. 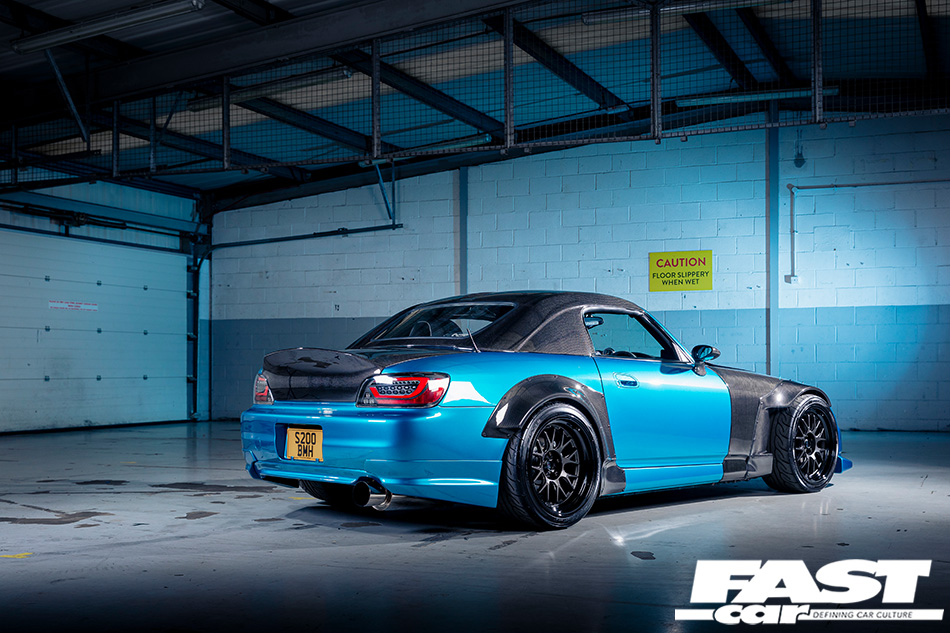