Serving up slick OEM+ styling, on-point stance, and a healthy dose of supercharged power, this seriously tasty E46 325ci demonstrates perfectly why the fourth-gen BMW 3 Series is a modder’s dream.

There once was a time when the E46 was the cheapest way into 3 Series ownership and even the cheapest way into BMW ownership, but those days are long gone. You can still find cheap-ish E46s with high miles and in less than perfect condition, but if it’s got two doors and six cylinders, like Josh Nichols’ (@builds_by_joshy) example, then a good one will set you back a few quid as people are starting to appreciate them. And the E46 deserves a whole lot of appreciation. It’s a great car – it still looks good, it’s fun and engaging to drive, practical, and, when it comes to modding, there’s so much out there to choose from that it’s a little bit overwhelming. Not that that was a problem for Josh, mind, because one glance at his BMW 325Ci is enough to tell you that he’s got this whole modifying thing well and truly sorted. 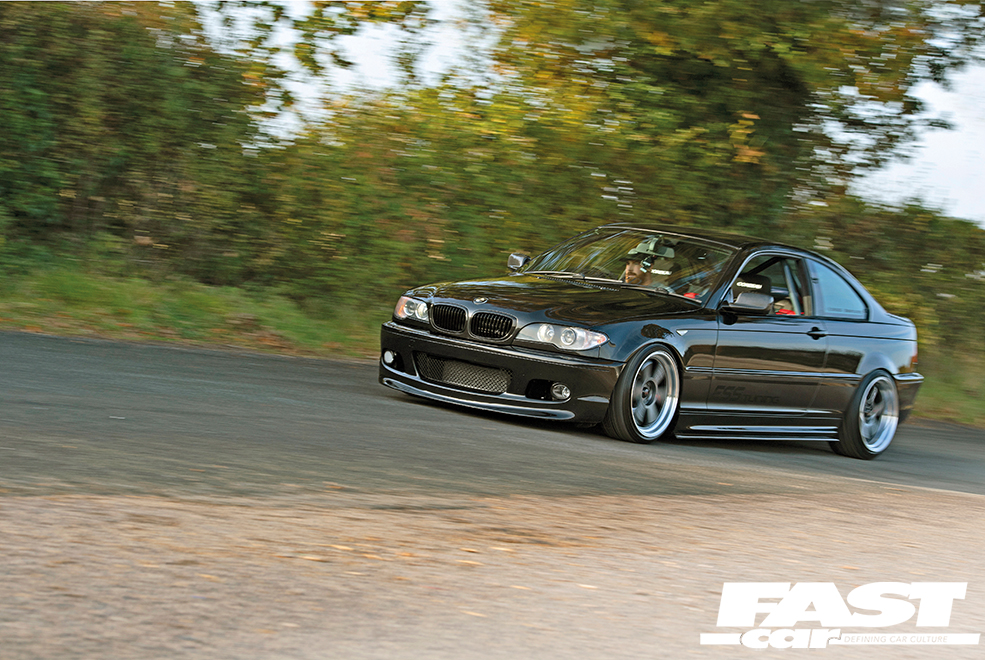 Josh is clearly a BMW fan, he wouldn’t be driving around in a modded E46 if he wasn’t, but just how big of a fan he is becomes clear after chatting to him for a few minutes. “I’ve been into BMWs ever since my first car 10 years ago, an E46 320Ci. The reliability and comfort no matter how hard they are driven make them special,” he enthuses. “I bought the E46 because I’d heard that they slide well; it was just a bit underpowered, but I do love RWD!” Josh grins, and he’s certainly not lying as this 325Ci is joined by a BMW E46 M3 Convertible and an E91 M Sport Touring, a very nice three-car garage.

“I bought my 325Ci because the car I had previously turned into a headache with many problems, and so I sourced this E46 as it had been well looked after with a good history,” explains Josh. “The plan was to build a car to a high standard that is still usable. A plan to modify the E46 with air ride for the stance look but also run some mods that suit my driving needs and create good power! The original plan has now been achieved, and it looks and drives exactly how I wanted it to,” he smiles. That Josh had a plan in mind from the off comes as no surprise when you learn that he’s owned 60 cars in the past 10 years, most of which have been modded, and he’s definitely put all that acquired knowledge and expertise to good use. 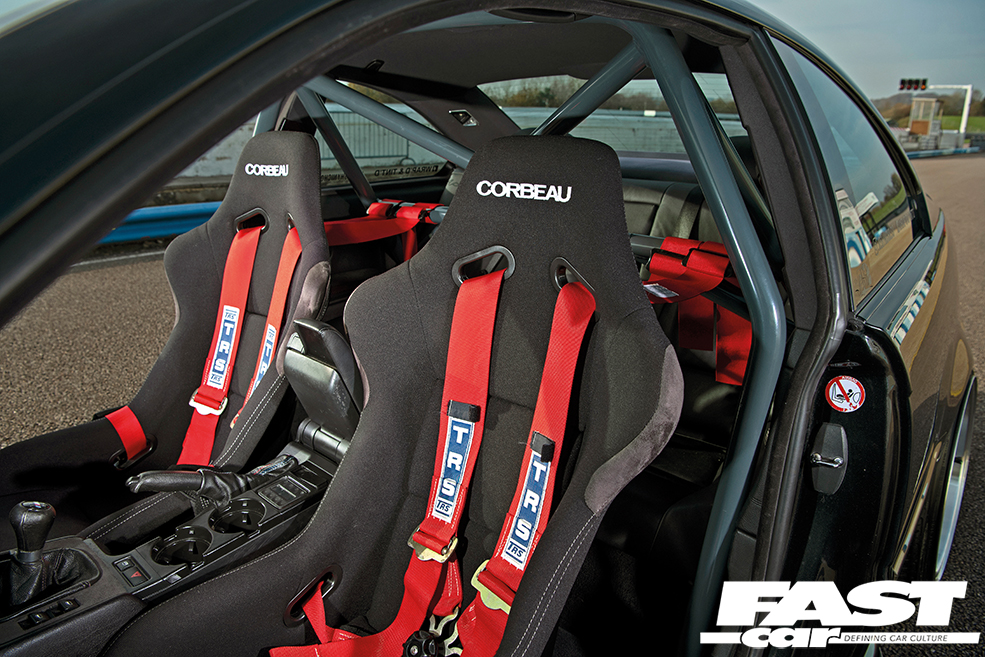 This E46 is very much the complete package, delivering in a big way in terms of both looks and performance, and it’s a very handsome 3 Series indeed. “I just wanted the car to look clean with the OEM+ styling, how I feel the 46 should look,” explains Josh about his aesthetic mods. “Much of the modification work was carried out by Jamie at RPM England. A great relationship has been built between Jamie and me over the past two years while building the 46. I now have more cars that are often with Jamie receiving custom modifications or maintenance of some sort,” he smiles.

The exterior mods are subtle, but they definitely make a big impact. Up front, the bumper has been enhanced with the addition of a CSL lip that has been moulded in, and it looks fantastic as a result; it really fills the whole bumper out and gives this supercharged E46 325ci so much more presence. Josh has also added black grilles, and, moving down the sides, you will spot the side blades and carbon mirror caps. At the rear, meanwhile, there sits an aggressive M4 rear spoiler and a diffuser, both also finished in carbon. This combination of styling mods works so well together and has delivered that OEM+ look that Josh was aiming for. The finishing touches, meanwhile, are the carbon roundels and black 318Ci badge he’s added, and that’s the perfect way to bait people who think this car is all show and no go… 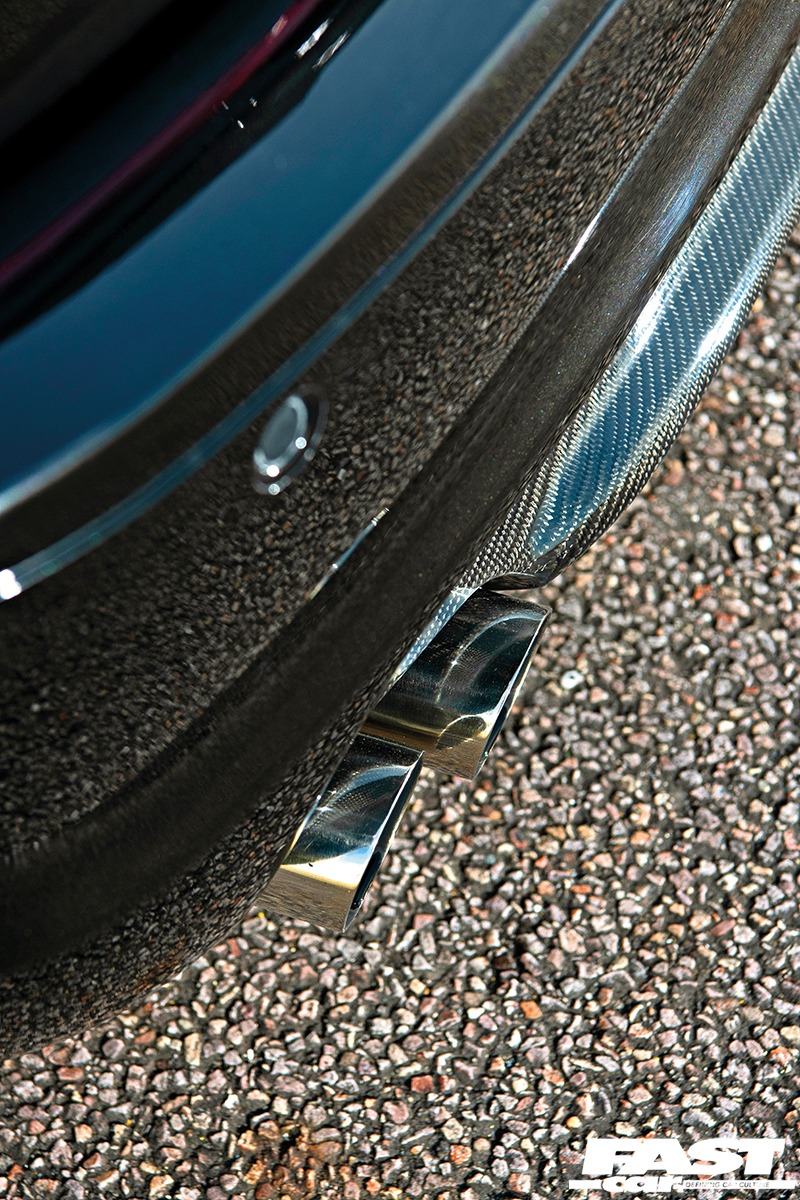 With sharp styling, you need some lows and the right wheels to match, and Josh has picked a wheel and suspension combo that really delivers. “My plan was always to run air-ride, and I chose it for the comfort and versatility it offers, allowing me to drive it anywhere without clearance problems and air-out when at car shows giving the low/stance look,” he says. Dropped low, this E46 looks fantastic, and Josh’s choice of wheels is the perfect accompaniment for the air-ride, and they play a big part in how good this E46 looks. “I love these wheels as the fitment works really well. Running Japanese wheels on a German car goes against the grain a little. I like that!” he grins, and we’re totally on board with that. The 18” Japan Racing JR12s he’s chosen look great and suit the car so well – the combo of grey centres and silver lips is a timeless one, and the deep dish design works fantastically well on the E46. The fitment is nice and aggressive, filling out the arches to perfection when Josh is on the move and seeing the lips just resting on the tyre sidewalls when the 325Ci is dropped at shows. It’s positively delicious.

Josh could have stopped there, and he’d have himself a fantastic-looking E46 that he could have been really proud of, but at this point, the surface of this build had only just been scratched. Josh wanted his 325Ci to look good, but he also wanted it to come with a healthy helping of power, and so the next step was to take care of that part of the build. “I chose the ESS Vortech V3 supercharger kit for its power output and reliability. I was toying with the idea of doing a turbo conversion, but I liked the idea of a supercharger setup. I think it really suits the engine bay well and looks like it should have always been there,” grins Josh.

“With the careful installation from Jamie at RPM England and the high quality of the components from ESS, the engine bay is definitely a part of the car I often look at and love,” he says with a smile. “Many people like to be sure that the bodywork is looking fresh and clean (as do I), but I like to frequently have the engine bay detailed to appreciate what’s under the bonnet. The Mishimoto cooling system was a great addition to run with the supercharger kit to ensure reliability and efficient cooling with the added power,” Josh says. This is a killer setup that’s really endowed the M54 with some serious muscle, around 300hp in fact. To give his supercharged E46 325ci a proper soundtrack, Josh has had a de-cat carried out and a stainless steel exhaust system fitted, while a solid-mass flywheel conversion and a DC Performance clutch kit ensure that the transmission is up to the task of putting all that power to the tarmac. 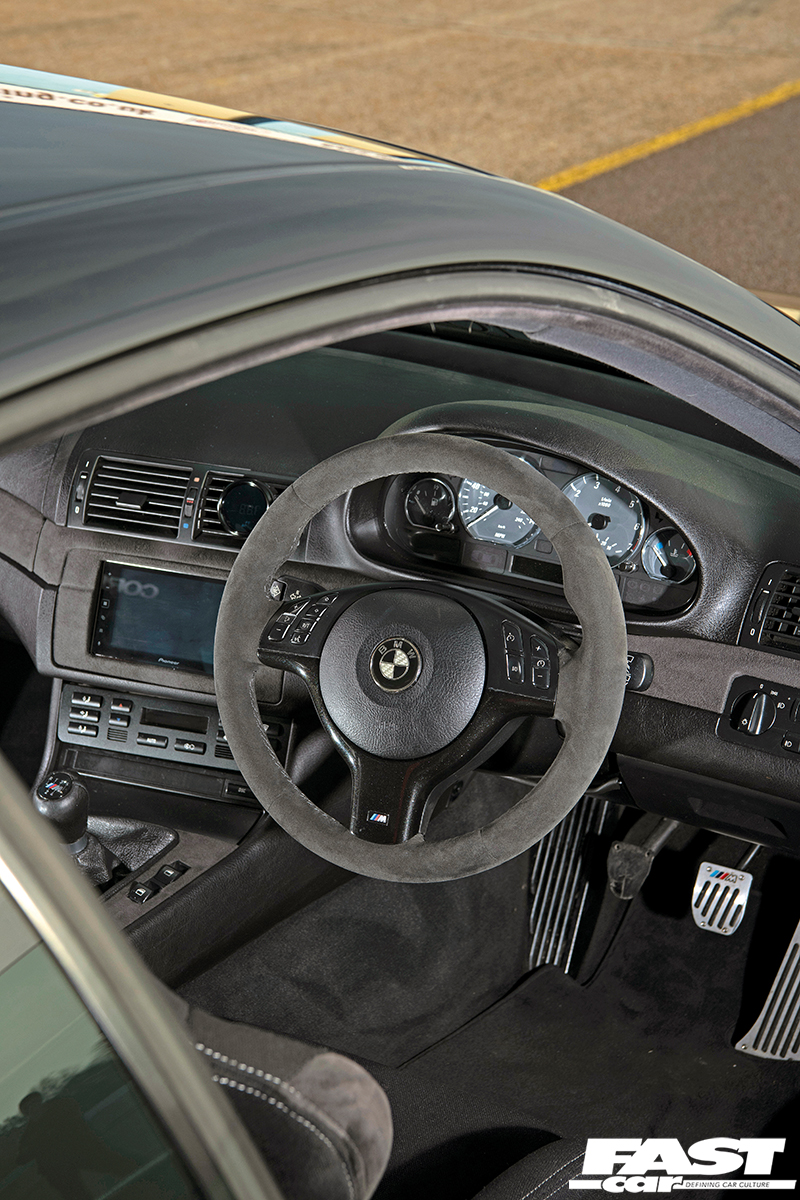 The final part of the car that Josh turned his attention to was the interior, and it really doesn’t disappoint. “I wanted to go for the clubsport look. I did decide, though, to retain the rear seats when having the cage installed as it’s not really the done thing. I think it looks great and keeps the interior looking clean and tidy. People often comment on it and wonder why. It’s not like the seats can be occupied, but that’s not the point to me,” he reasons, and modding is always about doing your own thing and what’s right for you. In keeping with the clubsport look, the cage is joined by a pair of Corbeau Club Sport single-piece bucket seats, accompanied by TRS four-point harnesses. There’s an Alcantara steering wheel with a carbon roundel, and the dash trim and door armrests have been finished in Alcantara. The finishing touches are a custom-mounted Pioneer double-DIN touchscreen head unit, a vent-mounted boost gauge, a set of alloy pedals. Since the shoot, Josh has also added a Coolerworx shifter with an RPM England shifter surround, giving the interior even more of a clubsport feel. 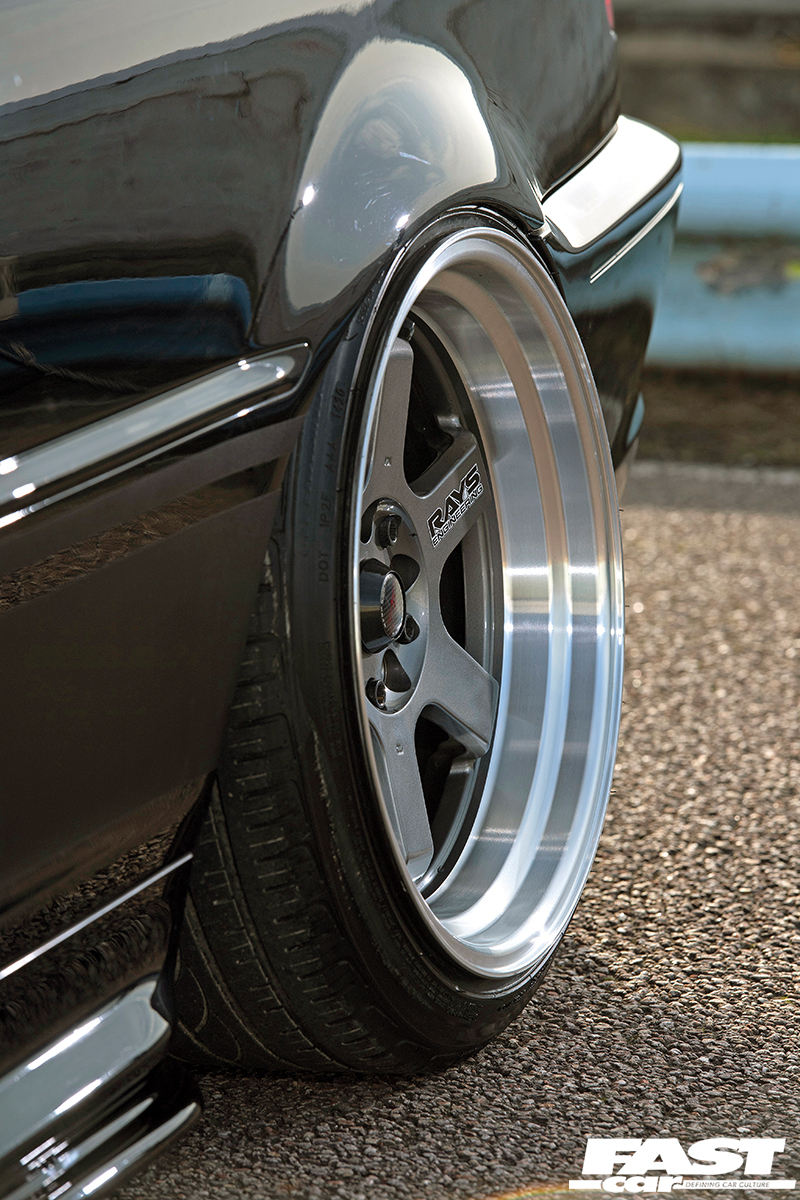 The fact that this car has enjoyed some additional mods since we shot it makes it clear that Josh isn’t about to leave it alone, even after two years of modding. “I’m planning some small tweaks here and there to produce more power and create some more custom parts. There are always plans, even when I think I’ve finished it,” he laughs, and that’s just how modding a car goes. But no matter what other mods Josh has planned, nothing will top that supercharger. “It’s my favourite mod. It transformed the car’s driveability and really changed the personality of this car!” he enthuses, and we’re not surprised. With its on-point styling and stance, and the power to back up those looks, this supercharged E46 325ci is the perfect modded package. It’s no surprise that Josh, and the BMW scene, is so keen on the fourth-gen 3 Series, and this example is an absolute belter. 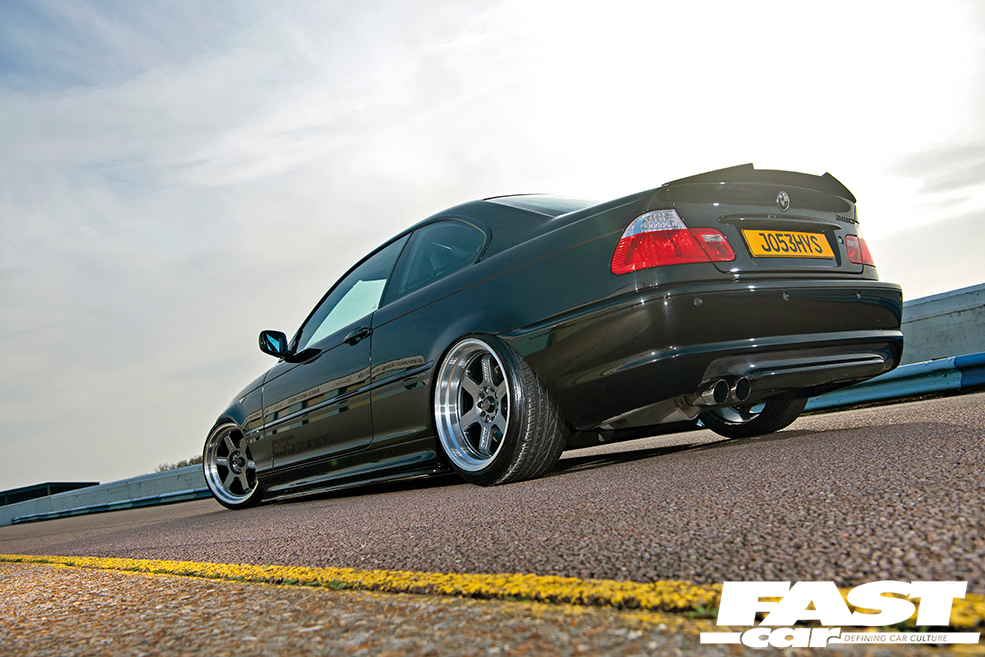