Tobias Arkell continually engineered his beloved Fiesta XR2i until he created this monster-spec, turbocharged ST170 engined, RWD animal – and it’s all been built in his shed…

Great Britain has a history of blokes in sheds churning out world-beating engineering masterpieces – it’s in our DNA, it’s why seven of the ten current Formula One teams have bases in Britain, and ultimately, it’s how we won the war. The man tinkering in his shed is an archetypical British phenomenon.

But in an age where everything is digital you may think that man-in-a-shed spirit has been replaced with computer-aided pristine white workshops, leaving behind the old beardy-weirdies to twirl their Whitworth spanners on some old classic piece of junk that never actually worked in the first place.

But, thankfully, the world still has people like Tobias Arkell. Yes, he does have a beard, and hailing from deepest, darkest Cornwall, some may say he’s a bit weird – but he possess that oh-so-British desire to tinker. And he’s clearly got quite the knack for it, as proved by wheeling this immaculate-yet-crazy, RWD Fiesta XR2i complete with a turbocharged ST170 engine out of the shed it was built in. 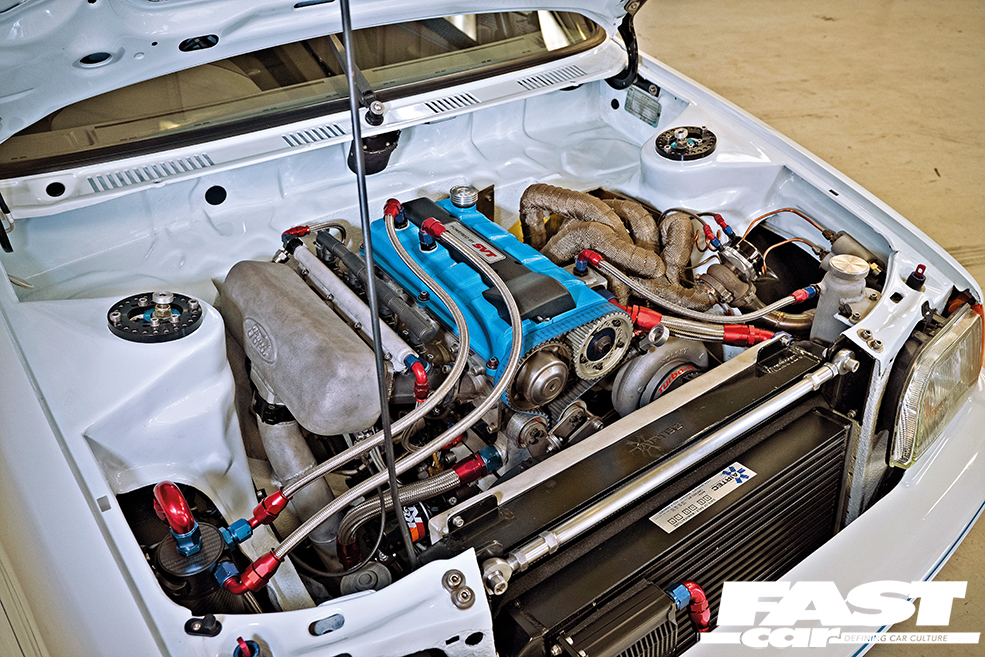 Growing up, our man was always destined to be a Blue Oval owner, thanks is no small part to Uncle Robert and his Graham Goode-tuned Sapphire Cosworth. With a punchy YB fettled by a famous RS500 racer, a perfect stance, and bags of performance, teenage Tobias wanted his new purchase to follow in the footsteps of the car that formed his love for fast Fords.

Tobias quickly realised he wasn’t going to get the performance he wanted from the CVH, so a swap to a full 16-valve Zetec soon came about. But not any old Zetec; Tobias fitted throttle bodies and ran it on a Megasquirt ECU hooked up to a CTS Stage 2 ‘box with Quaife ATB diff upgrade. 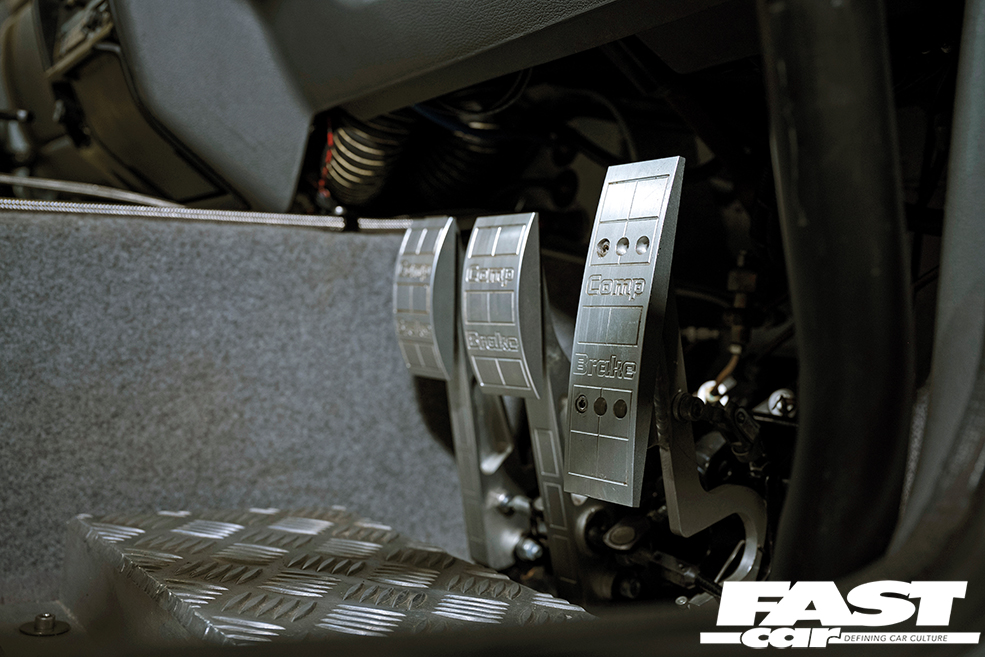 At just 18 years old, that’s quite a weapon, but when you’re doing trips to Spa and Nürburgring alongside mates in Cosworths and RS Fords, the lure of a turbocharger to keep up is always going to be hard to resist. Too hard for Tobias, whose engineering-led brain went into overdrive at the thought of adding some forced induction to proceedings.

Tobias recalls, “I started to find a love for making my own parts or modifying components to suit.

“Being an engineer by trade I had learnt how to TIG weld, so I bought myself a cheap TIG and started doing some bits at home – stuff like modifying a Crazycage exhaust manifold to reposition the turbo flange where I wanted it to mount. This led to custom boost pipes and a custom inlet too.” 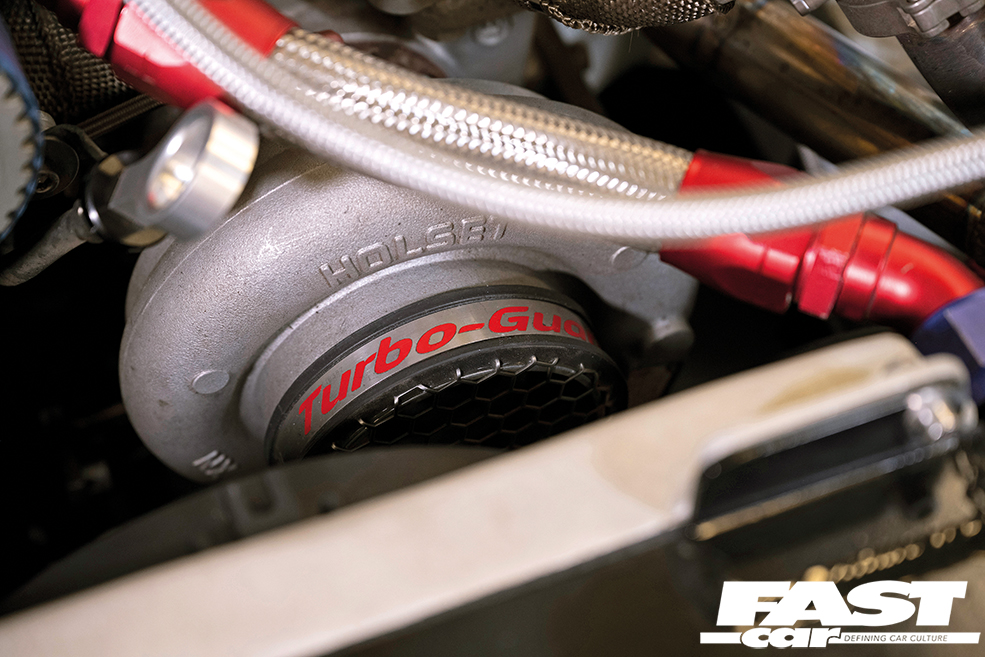 Despite all the monumental efforts getting the car running with the new Zetec turbo engine in situ, Tobias used the car only a handful of times in that spec (“As my mate Kurt often likes to remind me,” laughs Tobias) because the gearbox never seemed happy.

That’s where the story takes a twist – quite literally, through 90 degrees.

“I’d pulled the engine and gearbox out to replace another broken FWD box, and that’s when I came across a feature in Fast Ford on a rear-wheel-drive Mk1 Fiesta. My dad came in with a cuppa – his way of checking up on me and what I’m doing – and said, ‘why don’t you do that?’ With the engine swinging on the crane, I’d already started measuring up for a transmission tunnel before he’d finished his tea,” laughs Tobias. 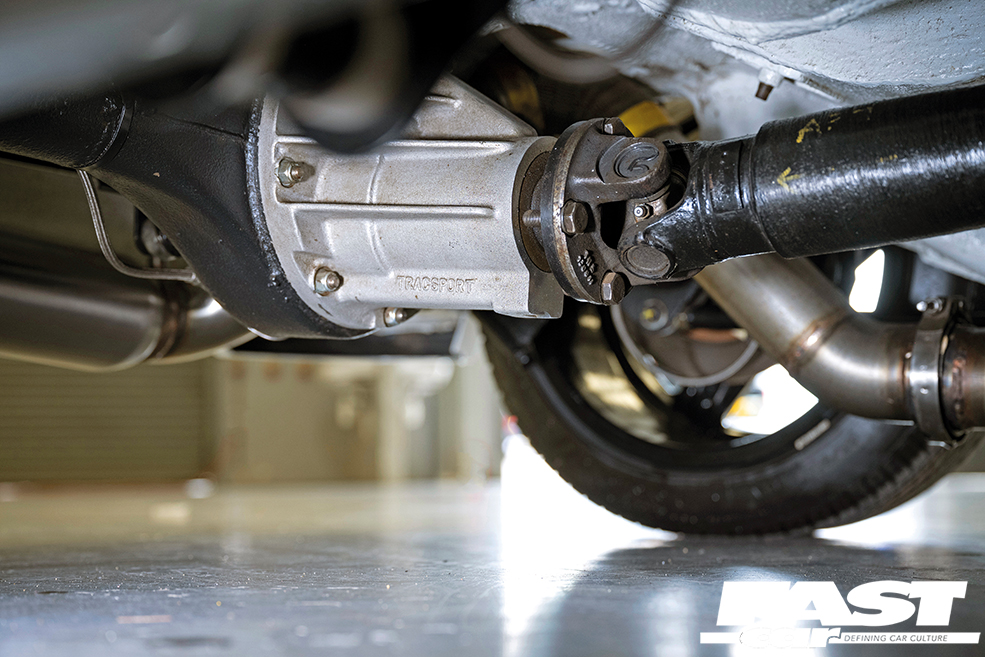 The starting point was finding a suitable rear-drive gearbox; one that would be slim enough to slot neatly under a custom transmission tunnel but would also be able to cope with the abuse from a highly-tuned turbocharged Zetec. The answer came in the shape of a Mazda RX8 unit.

Some of the classic’s boys have been using these to good effect, but Tobias couldn’t resist opening one up and having a little tinker.

“I’m using an RX8 gearbox with RX7 bearings and my own machined baffle plate to add strength, as well as some oil capacity,” he smirks. “After speaking to a few RX8 gearbox users and chatting about failures (fourth gear in particular seems to be an issue) I decided to strip mine down and found that all the bearings are sealed units. 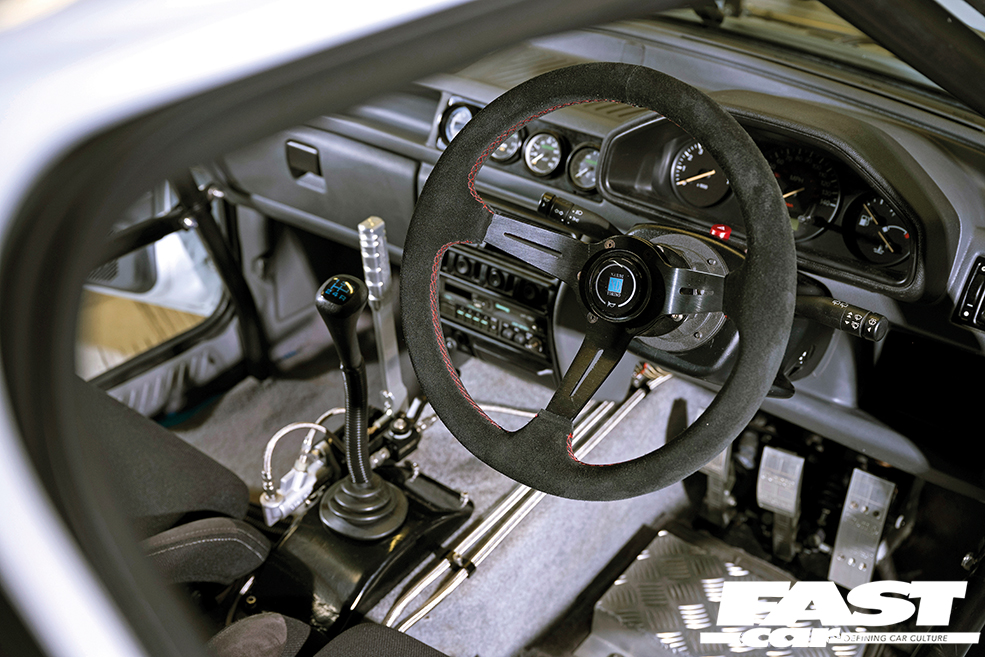 “I then found out that people use the RX7 (FD3) gearbox in high-power applications without any problems; it has open-face bearings, meaning the oil can pass through and aid cooling. So, I converted my RX8 ‘box to run the RX7 bearings – which, as it turns out, fit perfectly without any machining.”

At the back end, a trusty English axle has been stuffed with an aggressive 3J Driveline NXG limited-slip diff (with 45/45 ramp angles, and a seriously heavy pre-load), a 3J alloy front snout, and 3J 18-spline halfshafts.

Connecting the two is a fancy carbon-fibre propshaft. “I got lucky with that,” Tobias admits. “It’s from an RX8. When I offered it up, by sheer fluke it had the perfect amount of float. I did modify some Land Rover Defender universal-joints, though, so I could use a larger Atlas axle drive flange on the diff.” 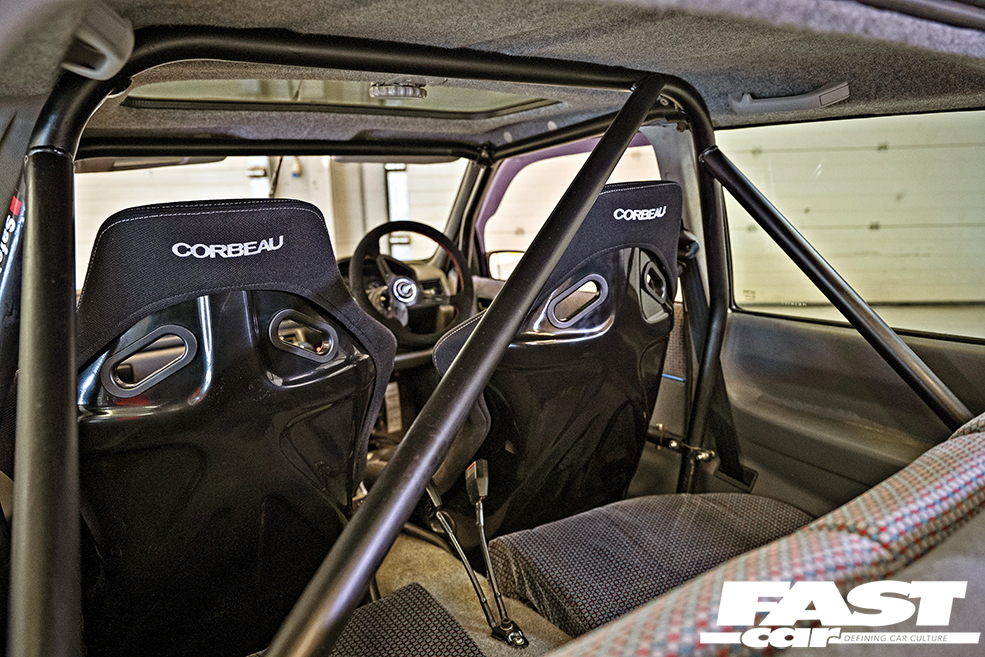 With the car stripped, the entire Fiesta shell was fully stitch-welded – a process of strengthening every seem with a pattern of one-inch weld followed by one-inch gap all the way around. At the same time, Tobias strengthened the front chassis rails with custom reinforcing plates and raised and redesigned the strut tops to suit the camber-adjustable mounts this XR2i now wears.

And that’s before we get to the obvious stuff like custom-fabricating a transmission tunnel. Tobias explains, “I cut and fabricated a full tunnel to the rear, and then raised and reinforced the boot floor and strut towers and added a welded-in cross brace. I’ve also moved the bulkhead back to try and get the weight distribution of the engine and transmission as far back as possible without affecting the interior too much.”

Similar evidence of not wanting to lose sight of the XR2i’s origins can be found with the rear end. Of course, no Fiesta ever came with an English axle from the factory, but Tobias has employed a custom six-link setup that retains the original XR2i geometry. 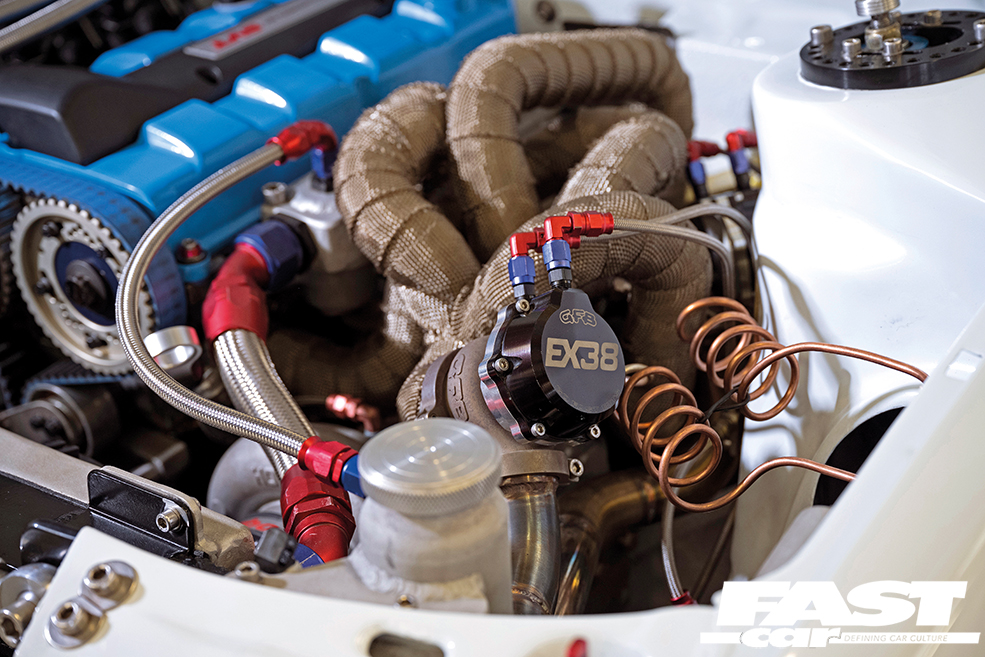 “It took me weeks to come up with it – I scaled the arms down, and even used lollipop sticks to check that it would all work in unison and the axle would travel through the motion correctly,” says Tobias.

It’s a similar story at the front: Sierra hubs modified to eliminate bump-steer join rose-jointed Fiesta RS1800-style wishbones on a custom subframe with the steering rack (made from a Sierra quick-rack with Volvo tie arms and rose-jointed ends) mounted in front of the engine. Rotating the engine itself through 90 degrees was comparatively simple, and some no-nonsense chassis mounts hold it all in the right place.

Ah, the engine. We’ve certainly saved the best for last. Based on a genuine Mountune CGi (carbon graphite-impregnated) block that you’d normally find on the Focus WRC cars that a certain Mr McRae used to drive, Tobias then further machined things to his own spec.

“The block was decked by 0.6mm to work with the desired compression ratio, and I also drilled and tapped the head studs to accept larger M12s – very nerve-racking, considering how rare the block is,” admits Tobias. 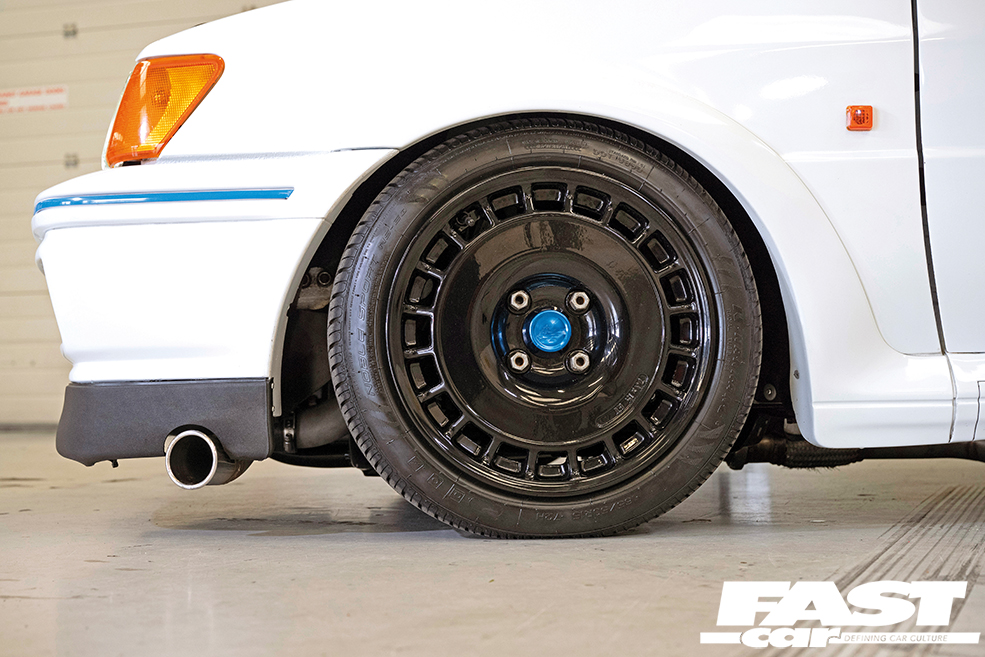 Inside the fancy block lives a set of Mk1 Focus RS H-section conrods from PEC and a set of secret Phil Reeve-spec pistons, but Tobias couldn’t resist putting his own stamp on things.

“The rods have been balanced to within 0.1g between them using my home-made jig. I machined the pistons to add valve pockets for clearance to allow the VVT to work, lateral gas ports, forced-pin oiling, and accumulator grooves – all done on my little toolmaker’s mill and lathe at home,” Tobias confesses.

On top of all that you’ll find an ST170 cylinder head (ported by Tobias himself, naturally) while the notoriously weak oil pump has been replaced with an externally mounted unit that means Tobias can retain the wet sump system but without fear of the oil pump exploding.

The impressive exhaust manifold was custom-made by Tobias from stainless steel and features 1.25in headers with a cast collector that includes a twin-scroll design and twin external wastegates. 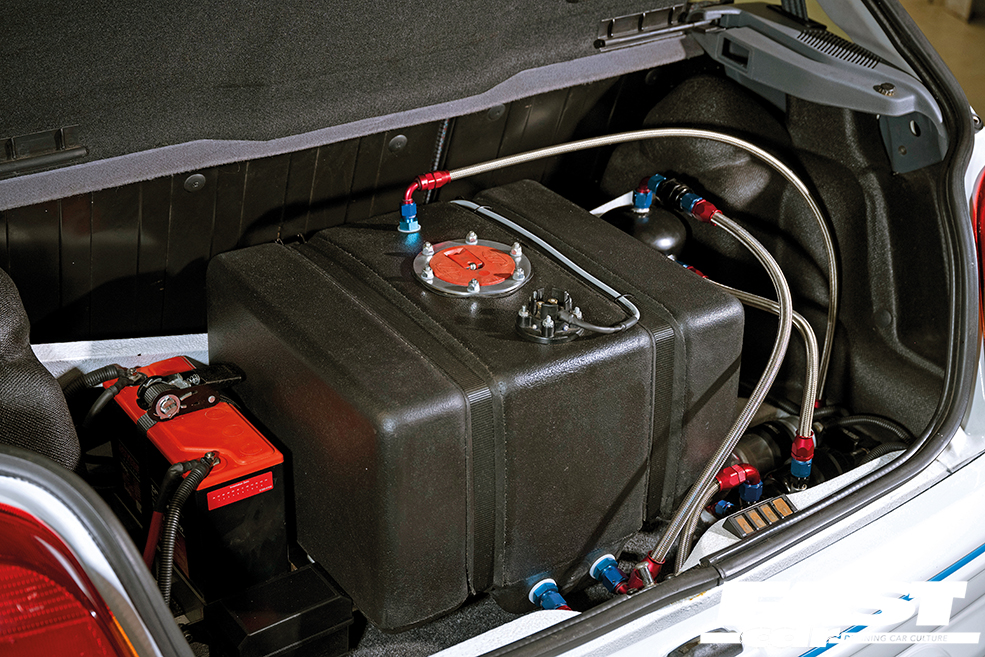 Tobias explains, “I went with a bottom-mount turbo manifold design, as I love the old Zakspeed cars with their crazy manifolds and how they were bottom-mounted.”

The turbo itself is a Holset unit; originally found on a Cummins generator, it’s been modified by Compressor Racing to create what is a hybrid HX35, or – as it’s called – an RS321. Off the back of the turbo, Tobias has made a 4in downpipe that tapers to 3.5in and then to 3in for the rest of the exhaust system.

The twin external wastegates are nice and small, so they work well in such a tight engine bay. Tobias has linked the outlets of both ‘gates so they exit via a neat little 2.5in outwardly rolled tip exiting from the passenger side of the front bumper. 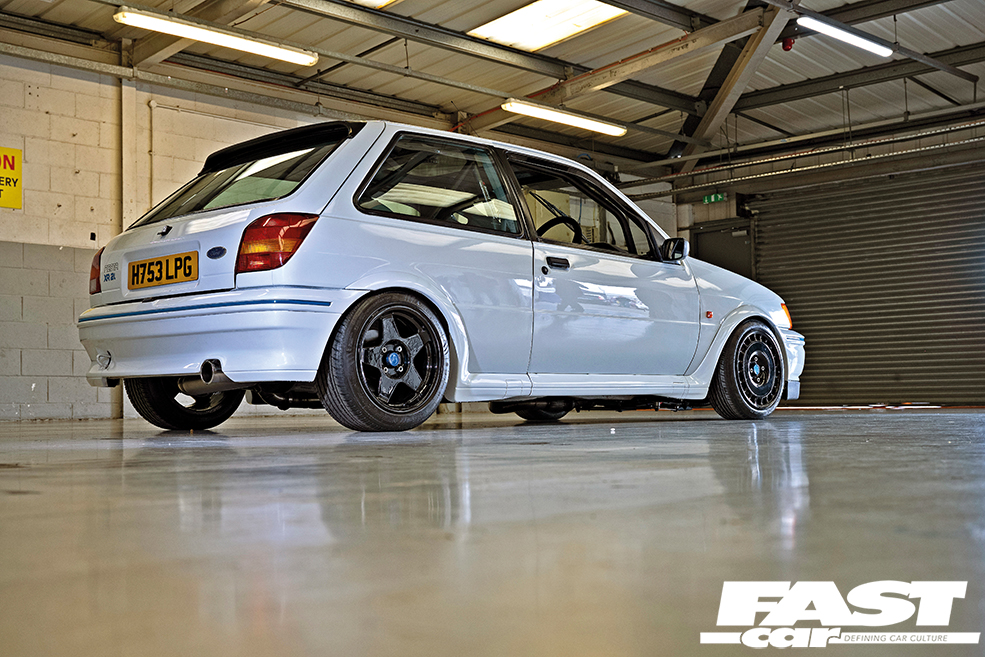 On the other side of the engine, the inlet manifold is another one-off. Tobias explains, “Many people don’t believe it, but the inlet is my own custom build. I based it on an RS200 manifold – the Ford logo comes from an RS1600i manifold that I cut the top off, while inside it’s got 25mm-high trumpets to encourage better flow. The plenum is also linked to the Jenvey 48mm throttle bodies from my N/A engines, although I have cut the ends off and welded on thicker flanges, and changed the seals to double lip seals too”

A custom cooling package comprises an Airtec RS500 intercooler (albeit mounted upside down and working with 2.5in solid boost pipes), an Airtec Cosworth 60mm radiator (modified with AN16 flow and return fittings) with twin 11in fans, and a 15-row thermostatically controlled oil cooler.

A Toyota Yaris has donated its coil-on-plugs, which Tobias mounted using a custom adapter plate. Finally, the whole thing is controlled by an ECUMaster Black engine management system – which Tobias is happy to map himself. 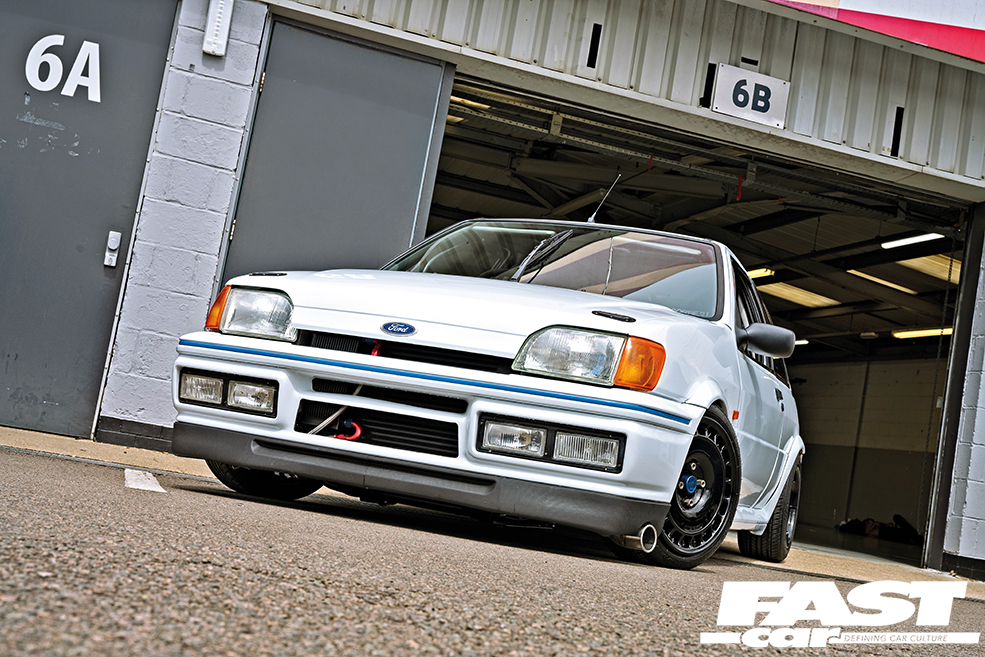 “I’m still learning for sure, but this ECU is so user-friendly, especially as the algorithm needed for the complication of throttle bodies and a turbo isn’t the easiest to get my head around,” he admits.

The car was running and, on the road, last year, but it was short-lived. Tobias explains, “I had an issue with the alternator bracket, which caused the auxiliary belt to heat up and snap. Unfortunately, this happened at the worst time – when it snapped, it whipped around and took out my oil pump drive belt at 8500rpm and 20psi of boost.

“Consequently, this led to a full engine rebuild, but I don’t see it as a bad thing because it gave me an opportunity to do the modifications to the new-spec pistons, as well as completely rebuilding the gearbox to a higher spec, and adding some extra mods that I wanted too.”

And that sets the tone with this RWD Fiesta XR2i project, really. With Tobias’s constant urge to improve and develop, this Fiesta is going to continue to evolve over the next ten years too.

In fact, Tobias has already said he wants to build his own pedal box and change the front wishbone setup so he can run wider front wheels. Then he’s got eyes on a Quaife sequential gearbox, where he plans to hook up a pneumatic shift system.

So, the next time you take a trip out in the sticks to somewhere like Cornwall, keep an eye out for a man in a shed – they still exist, and the next one might also be building a cover-worthy fast Ford…