We’ve got a new project car and a crazy idea…  to turn a regular rep-mobile Mk4 Mondeo Titanium X into a track-ready racer!

Last month we introduced our new Rep To Race Car project; a somewhat crazy idea to see if we can turn a lazy but comfy rep-spec Mondeo Titanium into something that’s harder, sharper, faster, and capable of tearing up racetracks across the UK.

That’s not going to be an easy task and is going to require a lot of work to pull off, so this month we’ve wasted no time in getting stuck into the transformation.

We’ve already got support from Teng Tools – backing the project and providing the necessary sockets and spanners to complete such a build – plus Mark Sargeant at Ford Parts R Us, who will be skilfully wielding those spanners to make our vision become a reality.

But before we could get carried away with fitting all the performance upgrades, we needed to make sure the basics were all in place. The car has a full-service history and came with wads of receipts for previous work, so we thought we’d bagged ourselves a good’un. Yet there’s nothing like getting it up on a ramp and having a good old poke around for yourself. 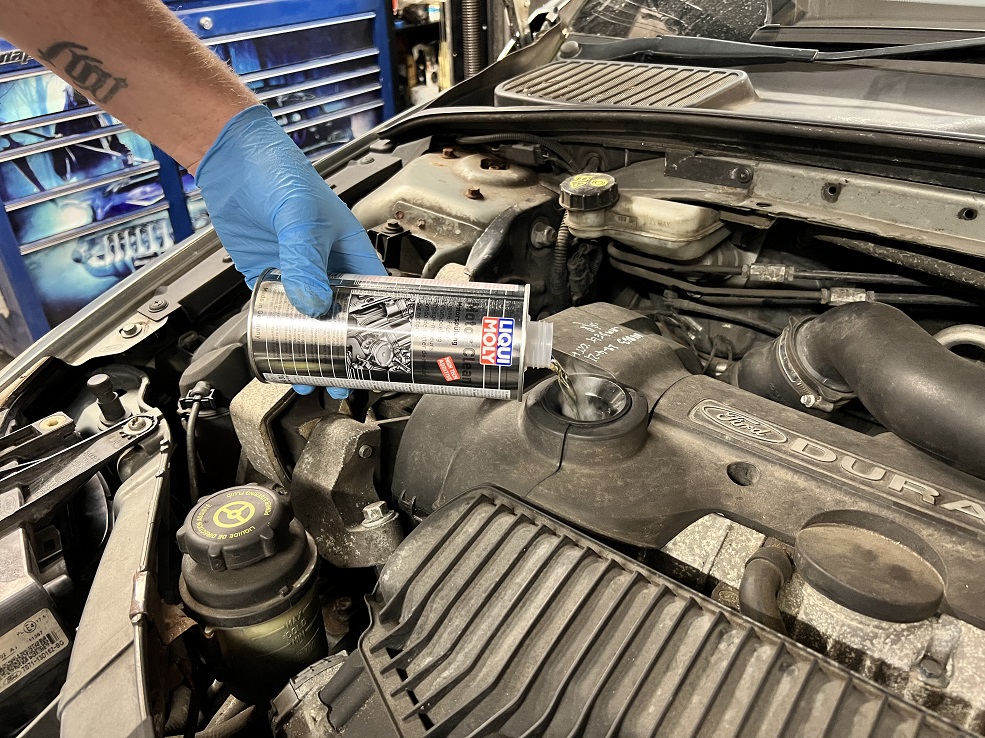 Thankfully, despite the grime and dirt, everything looks solid. And evidence of the car being well cared for and regularly serviced was even more apparent when we removed the old air filter; it had clearly not been in for long. Still, we were covering all bases and ordered all the parts for a good service: oil filter, air filter, cabin filter and even two new auxiliary belts as the old ones had started squeaking on the alternator and power steering pump – not anymore.

We even treated the engine to a good flush out with Liqui Moly’s Motor Clean. This clever additive is designed to dissolve old oil deposits and nasty build-up from inside the engine – perfect for a 120k-miler that’s spent most of its life cruising up and down the motorways. Just add it to the oil, run the car at idle for ten minutes to let it do its thing, and then drain it all out with the old oil.

This left us with a nice clean engine, which we topped up with Ford-spec 0w40 oil. Then, to add future protection – and hopefully free up a bit more performance along the way – we topped the system up with Liqui Moly’s Ceratec additive. This is like a ceramic coating for the inside of your engine, reducing friction for added protection and improved performance too. Just the job for this Mondeo. 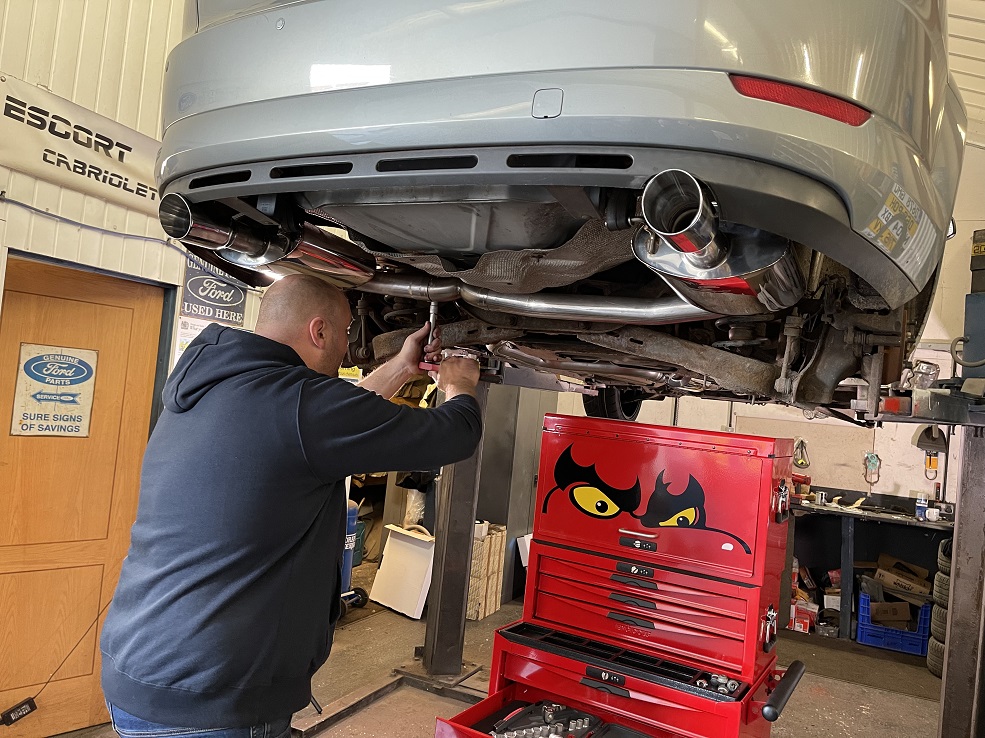 With the car fully serviced and given the thumbs up from our resident mechanic, we were given the green light to get stuck into the upgrades. First on our list, as with many modified cars, was the exhaust system. There were plenty of reasons for choosing to ditch the OE system: it’s a huge restriction when it comes to future tuning (especially the standard downpipe and catalytic converter); it sounded terrible – the five-cylinder five-pot should have a snarling off-beat growl, but the stock exhaust system muffled all of that; and finally, the original exhaust was rotten – one of the hanger brackets had already rusted away and broken off, and the rest of the system wasn’t far behind.

The perfect solution came in the shape of Scorpion Red Power’s stainless system for the Mk4 Mondeo. We’ve opted for the full turbo-back system, which means a high-flow 3in stainless steel downpipe coming straight off the back of the turbo. This will be needed later on when we start engine tuning work, and will allow the turbo to get rid of those exhaust gases much faster. 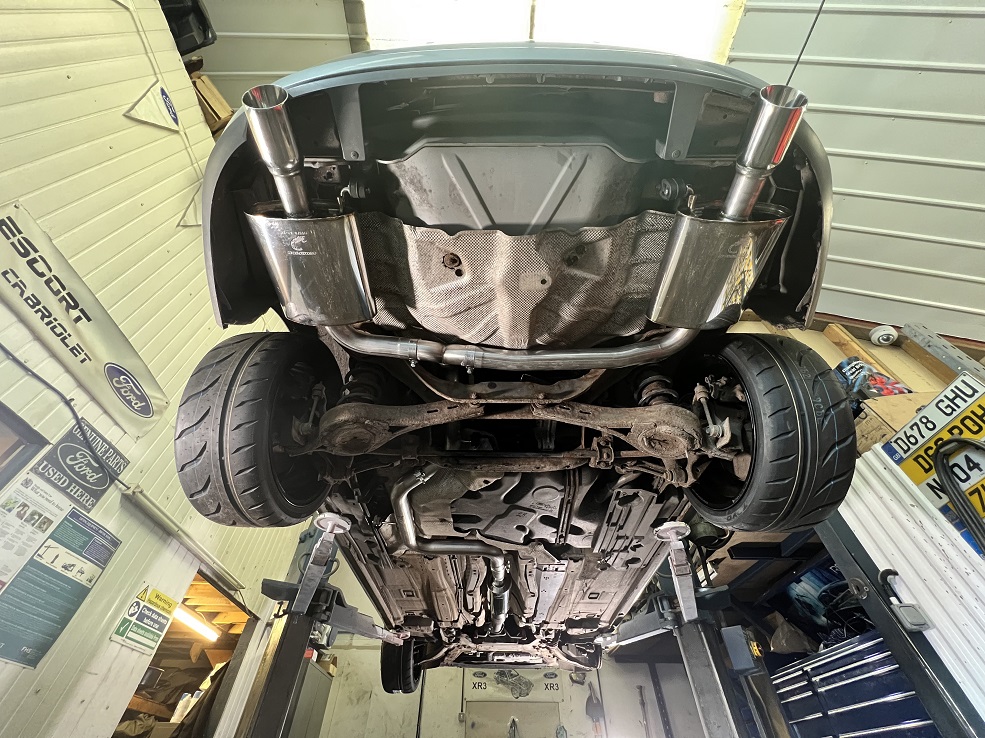 Coupled to the downpipe we’ve fitted a Scorpion sports cat. We could have opted for a de-cat pipe (which is significantly cheaper) but while the car is being built to take on racetracks, we still want to be able to drive there legally. A sports cat offers the best of both worlds.

Finally, the cat-back system bolts up to the sports cat and follows the original routing of the factory system, meaning it attached neatly to all the OE fixing points using the original rubbers. Our car did require some minor trimming to the rear bumper for tailpipe clearance – the system is designed to fit with the X Sport rear bumper, but we quite like the way it looks with the original Titanium X bumper. Plus, we may look to add a custom diffuser later in the build.

With the exhaust system fitted, we couldn’t wait to fire up the car to hear what it sounded like. What a difference! As soon as it bursts into life it has a much deeper growl and more meaningful burble at idle. 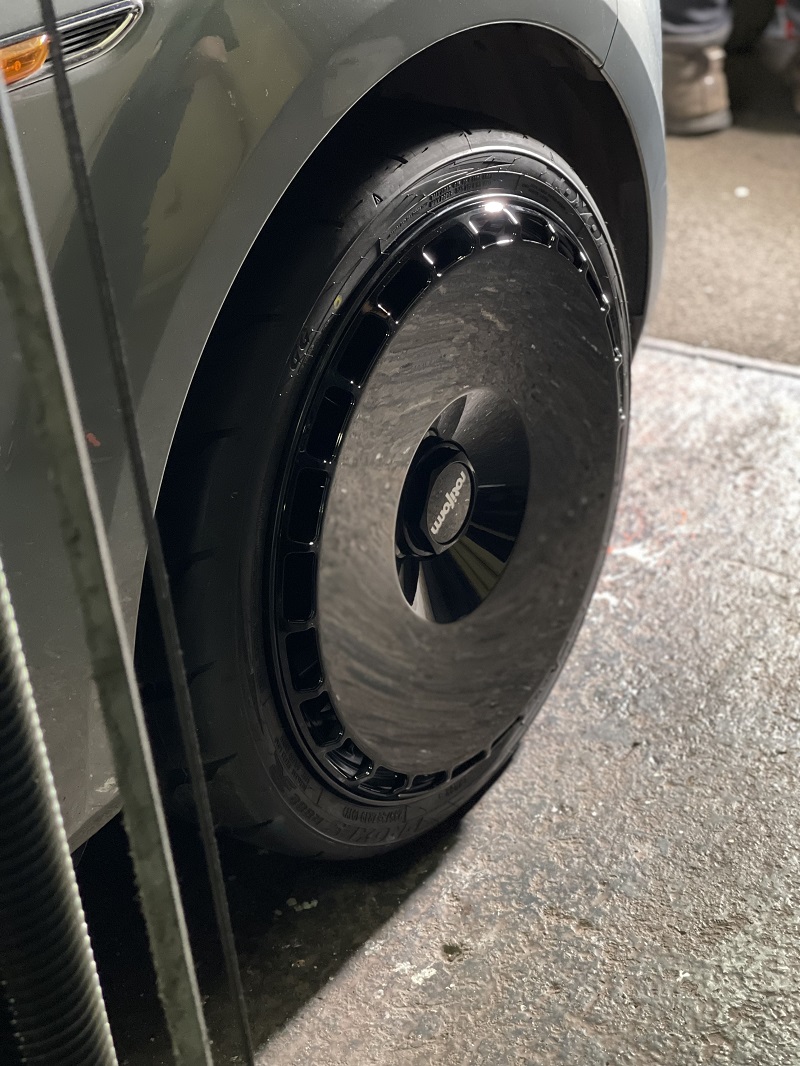 Give it a blip of throttle and it barks and howls like that much-loved five-pot should. After a run, and when everything’s nice and warm, you get a few spits and crackles on the overrun too – nothing like a pop-and-bang map, but some nice organic snaps and hisses that deliver plenty of audible encouragement.

Inside the cabin, it strikes the perfect balance of being sporty without being intrusive. It’s not at all offensive or too loud but has really beefed up the soundtrack to our car – perfect for our goal of being able to drive to a racetrack in relative comfort and then being able to set a blistering lap time.

It’s all moving the right direction, but we’ve still got a long way to go yet. As you can see from some of the photos this issue, we’ve recently taken delivery of some motorsport-inspired wheels and track day tyres – which we will cover in more details and show you being fitted in the next issue of Fast Ford – and then the car will be off for its race-style wrap shortly afterwards. 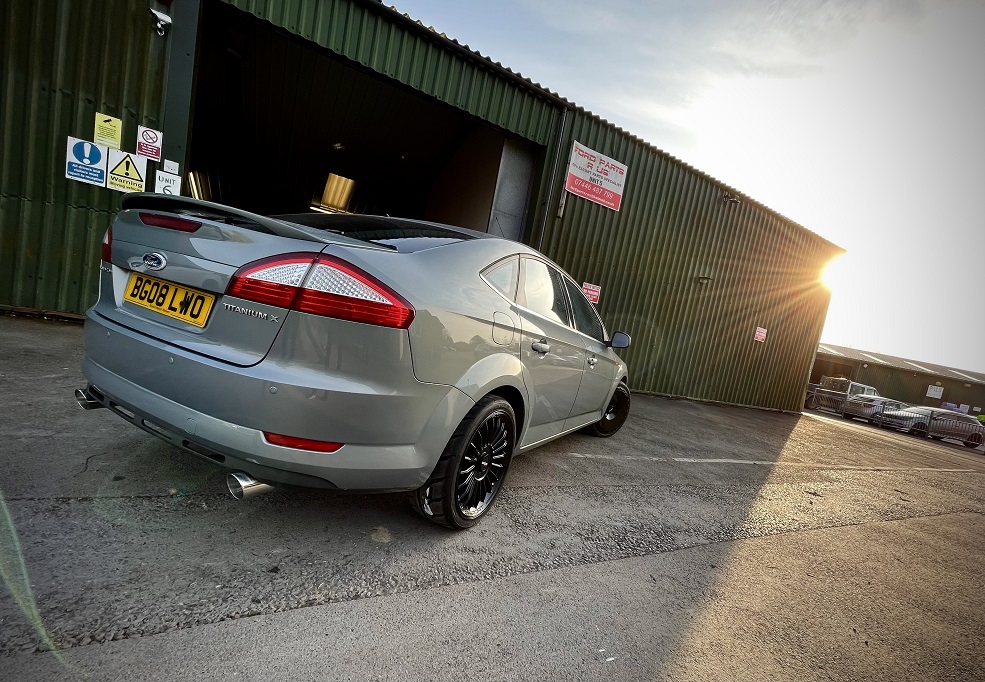 We’ve got ourselves a new project car here at Fast Car Entertainment HQ. And it’s not what you might expect. We feature loads of finely fettled fast cars –everything from old-school Escorts right through to the very latest hot hatches –but there’s one car that seems to be overlooked when it comes to tuning and modifying is the Mk4 Mondeo. ‘Why is that?’ we asked. Especially when the Mk4 is offered with the same fantastic five pot turbocharged Duratec that Mk2 Focus fans are so fond of in the ST and RS variants. And that got us thinking: can you take the humdrum motorway-mile-munching Mondeo and turn it into something ready to tear up the local racetrack? It’ll be no easy task, because the Mk4 Mondeo is a car firmly designed and developed to cruise the A-roads and motorways in comfort and control. So turning a soft, hefty cruiser into a sharp, precise track weapon is going to take a fair amount of work. But we’re not afraid of a bit of hard graft. And when we started looking into the prospect, we were pleased to see that, despite its relatively low production numbers, there’s still a wealth of tuning parts and performance upgrades available for the Mk4 Mondeo 2.5T. On top of that, UK tuning specialists boast one of the very best custom and one-off fabrication skill sets you’ll find anywhere, so if a particular part doesn’t already exist, we’re confident we can get it made for us.

So, to prove the point that you can take almost any standard car –no matter how unlikely –through a series of well-chosen upgrades from the right people, and then transform it into a genuine performance machine, our aptly-named Rep To Race project was born.

We spent the following weeks searching for a suitable car and our criteria were simple: it needed to have the 2.5T engine as shared with the sporty Focus models, and needed to be otherwise factory-standard. Surely that would yield loads of options, right? Wrong. The 2.5T is a remarkably rare car. And, on top of that, it seems to be increasingly popular too –we saw a few potential purchases that sold within just a day or two of being advertised. 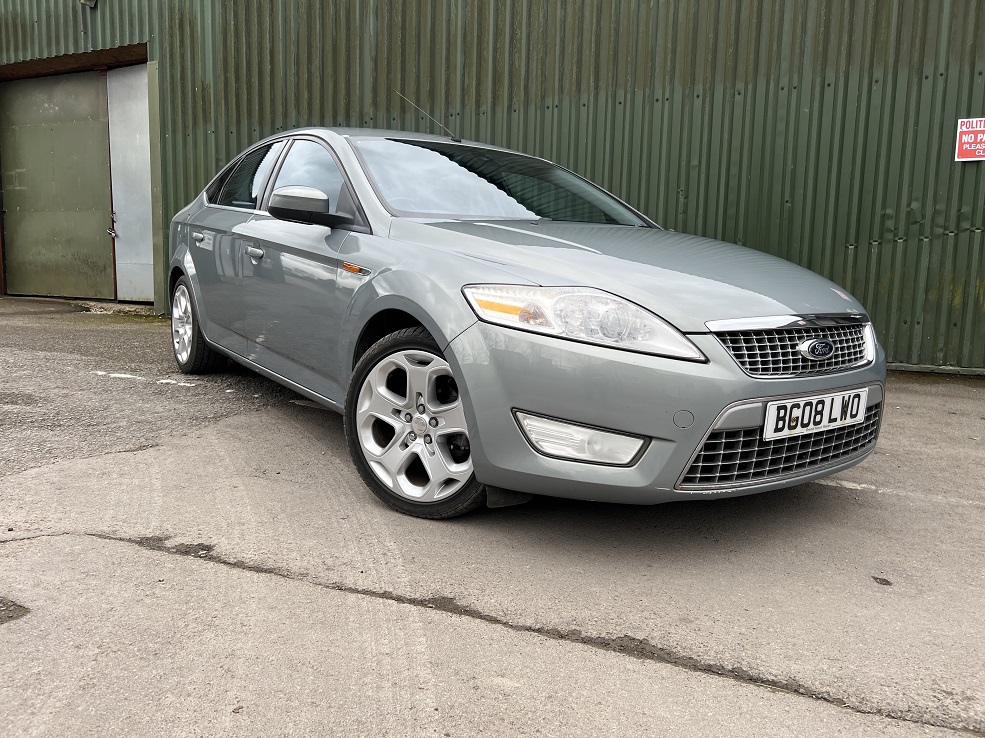 Luckily, we managed to find what looks to be a bit of a hidden gem in this 2008 Titanium hatchback. It lacks the desirable X-Sport body kit that would have been the cherry on the cake, but it does come with a fully-stamped service history, and a folder full of receipts –including one for a recent cambelt and water pump change. That gives us a brilliant base on which to start the project. To give us some inspiration we even commissioned Helen Stanley from TV’s Goblin Works Garage and Motor Pickers to draw us an artist’s impression of the final build.

Fuelled with plenty of inspiration, we’ve been able to get the project up and running, and if you watch the video above, you’ll notice that the first mods have already made their way onto the car! They include a set of Rotiform BUC-M 19in alloys complete with a pair of Aerodiscs for the front, a set of track ready R888R tyres from Toyo, and a complete turbo-back exhaust system from Scorpion Red Power.

This is just the beginning, so make sure you keep up to date with the build in Fast Ford magazine, and right here on Fast Car but don’t forget to check out our social feeds on Facebook and Instagram for the very latest updates as they happen. 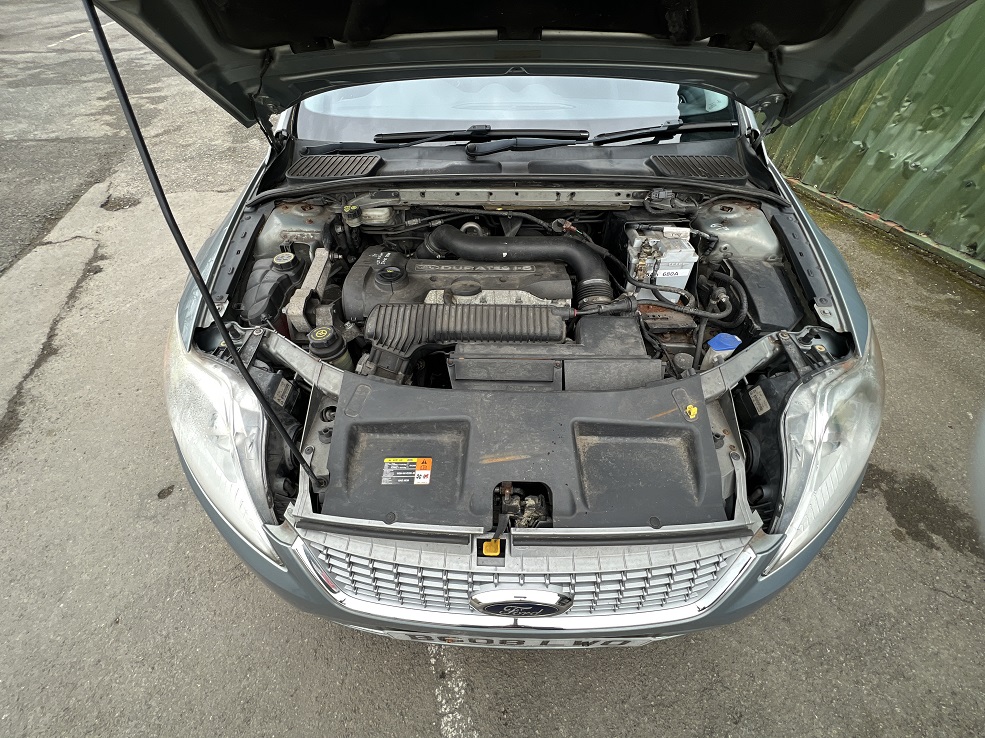