The R5 Turbo 3E may only be a show car, but it’s arguably one of the coolest EVs built to date.

This year, Renault is celebrating 50 years of its little 5 supermini – a car which also happened to spawn the wild rally-bred R5 Turbo & Turbo 2.

Evidently, the French marque felt that the occasion would be incomplete without a modern reinvention of that wide-arched off-road monster, and here it is…

The R5 Turbo 3E’s identity is summed up nicely within its name. The ‘3’ in 3E marks it out as the spiritual successor to the Turbo 2 (though the looney Clio V6 might have something to say about that), while the ‘E’ refers to its powertrain. Yes, it’s electric.

Now, some of you may turn your nose up at it given the batteries under the bonnet, but recently car manufacturers have been doing their best to prove that EVs can be fun too. Personally, we’re smitten with these two creations from Hyundai.

The Hyundai Vision 74’s ‘retrowave’ aesthetic is something that’s also present in the R5 Turbo 3E. Like the Hyundai, it too adds sci-fi styling on top of a modern-retro base. Still clearly a visual descendant of the original R5 Turbo, the 3E wears an identical bonnet and set of doors (albeit now made from carbon fibre). However, the core silhouette of the R5 has been bolstered by a heavily revised aero package, including wider front arch flares, more aggressive bumper, and a sizeable rear wing. Then, the digital camouflage livery with pink/yellow accents adds further personality on top. 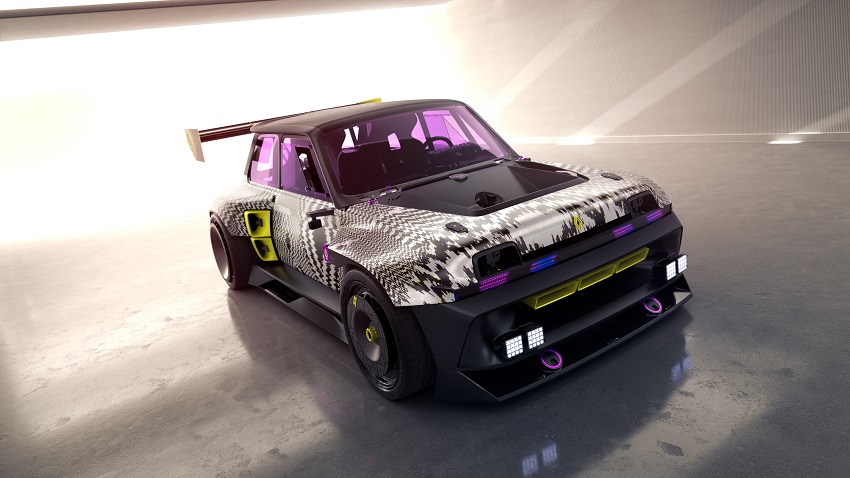 The fun of the exterior is matched by what you’ll find inside the car too. Peer beyond its pink plexiglass windows and you’ll see a cabin that features plenty of inspiration from the clashing worlds of motorsport and videogames. Your eye is first drawn to the large yellow centre console, which cradles a towering handbrake – a feature that nods to the sideways intentions of this car once it gets moving. The neutral grey and black fabrics make the bright accent colours pop even more, while the tartan patterning is a clear eighties throwback.

Behind the steering wheel, which is suitably futuristic looking, you’ll find a set of digital displays in place of the original R5 Turbo’s analogue dials. These aren’t any regular digital instruments though either. Lit up in pink and yellow, they take on an appearance inspired by retro videogames. Oh, and there appears to be a Renault-branded teddy bear stored away in the passenger side. We’re informed that its name is ‘Drifty’, and although we’re not 100% sure what it’s doing there, it’s cute so we’ll let it slide.

Anyway, speaking of sliding, that bear is likely to be in for a bit of rough ride. See, Renault didn’t just want the R5 Turbo 3E to be fun to look at – in fact, its sole dynamic purpose is to put a smile on the face of its driver.

To achieve that, the R5 Turbo 3E is packing a 42kWh lithium-ion battery that powers two motors; each attached to one of the rear wheels. This equips the little hot hatch with 380hp and 516lb ft of torque – and it’s all on tap instantly. 62mph arrives in just 3.2 seconds, and it’ll keep accelerating to 124. However, straight-line top speed is not at all what this car’s about. Instead, it’s built for corners. 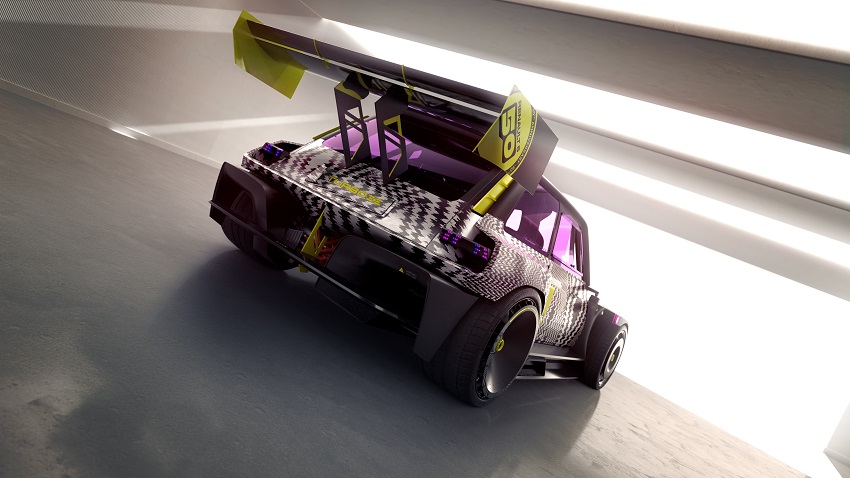 The car’s onboard computer offers three different ‘drift modes’ to allow the driver to get the most out of it in these scenarios. One is intended for, well, drifting as you might expect, whereas another sets the car up optimally for donuts. The third mode is rather ambiguously titled ‘Track Invader’, which is effectively a circuit mode. Underpinning all of this, meanwhile, is an FIA-approved tubular frame chassis.

There’s also a total of ten different camera mounting points, ensuring that it’s ready for all sorts of Gymkhana YouTube shenanigans. It even comes packing its own special effects, as the exterior LEDs will light up pink and yellow once you get the car sideways enough.

Cynics might call it gimmicky, but to us, this car exudes everything that we love about modified vehicles: it’s got enough punch to raise your heartbeat, a handling set-up that eggs you on to be silly, and a personality that elevates it beyond being just a mere machine.

Now, come on Renault, do the right thing and build a production version please.