August 1997 was drawing to a close. Millions – probably billions – of people around the globe were waking up to shocking news: Diana, Princess of Wales had died.

She’d died in a car crash during the early hours of the morning; the Mercedes S280 she was traveling in had collided with a Fiat Uno and hit into a roof support pillar in a Paris underpass. She died in hospital at 3am.

Regardless of your views on royalty, there’s no denying how much impact Diana’s death made around the world. Outpourings of emotions became surreal, continuing for months; even years. For many, it was life changing: Diana had been an inspiration; a fairy-tale princess. 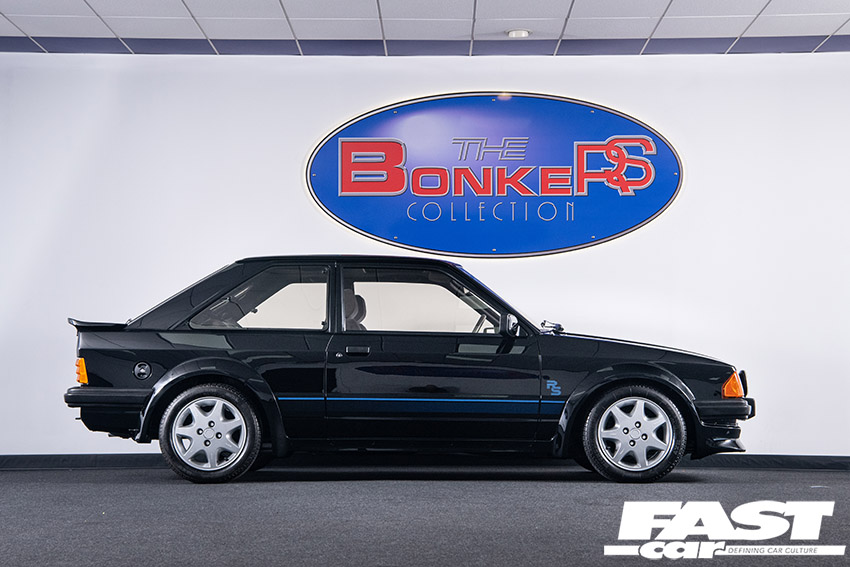 The People’s Princess, as it turned out, was one of us. And we mean that in the Fast Car sense; cars were entwined with Di’s public appearances, and she spent many years behind the wheel of a great Blue Oval.

Her first was a 1981 Escort 1.6 Ghia, which replaced the Austin Metro that Diana was driving when she came to the public’s attention. Prince Charles, Di’s future husband, had bought the silver Mk3 five-door as an engagement present for his fiancé in May 1981; it sported a frog mascot on the bonnet to represent a fairy tale in which a girl finds her prince by kissing a frog. 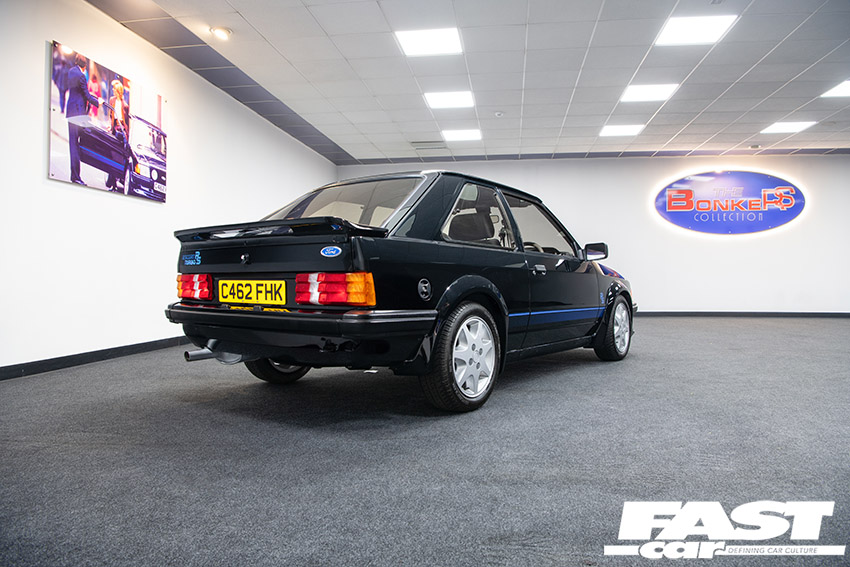 Diana’s next Blue Oval was believed to be a Regency Red Mk3 1.6i Cabriolet (A462 RHK), supplied on loan by Ford’s public affairs department, led by Harry Calton. It was the job of SVE’s special vehicle programmes manager Geoff Fox – who also happened to run the Cabriolet project at Karmann – to source the car.

Geoff recalls, “The Cabrio was a special build, as the body colour was only available on the Ghia Cabriolet, not the 1.6i. So if there’s an XR3i Cabriolet in Regency Red, there’s a bloody good chance it’s the same car.”

Geoff was also responsible for caring for the drop-top while it spent time back at base. He says, “I once had the car with me, and it’s amazing how many people wanted to borrow the key so they could sniff the seat…” 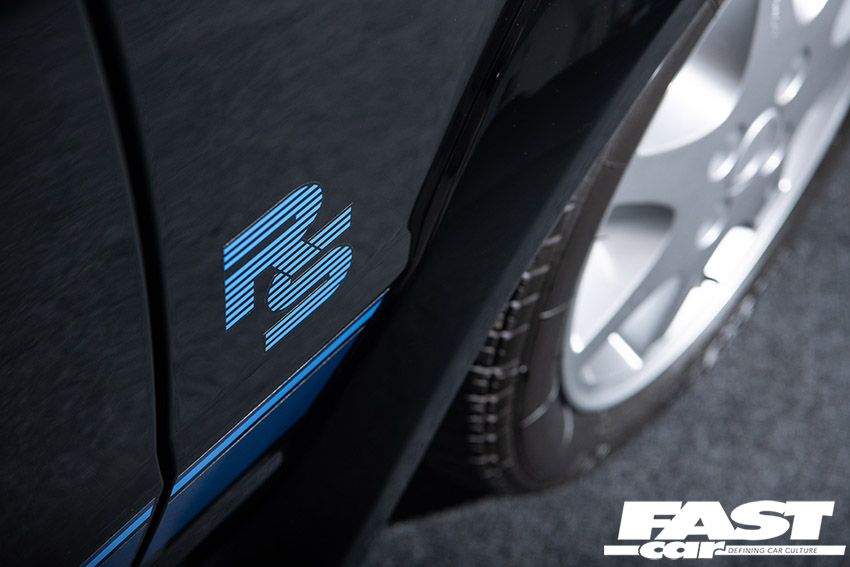 By then a fully-fledged member of the British royal family, Diana was given round-the-clock bodyguards by SO14, the Metropolitan Police’s royalty protection group. SO14 considered the convertible too conspicuous – and too easy to target by terrorists – in the days when the IRA was still active in mainland Great Britain, so the Met approached Harry Calton to provide something more discreet.

The suggestion was perfect: stylish enough to be seen in around London, sharp enough to outrun trouble, and could blend in with the thousands of other Fords on the roads. It was the Escort RS Turbo.

The problem was, the RS Turbo was available only in Diamond White, with bulky bodykit and in-your-face decals. It was deemed too noticeable. 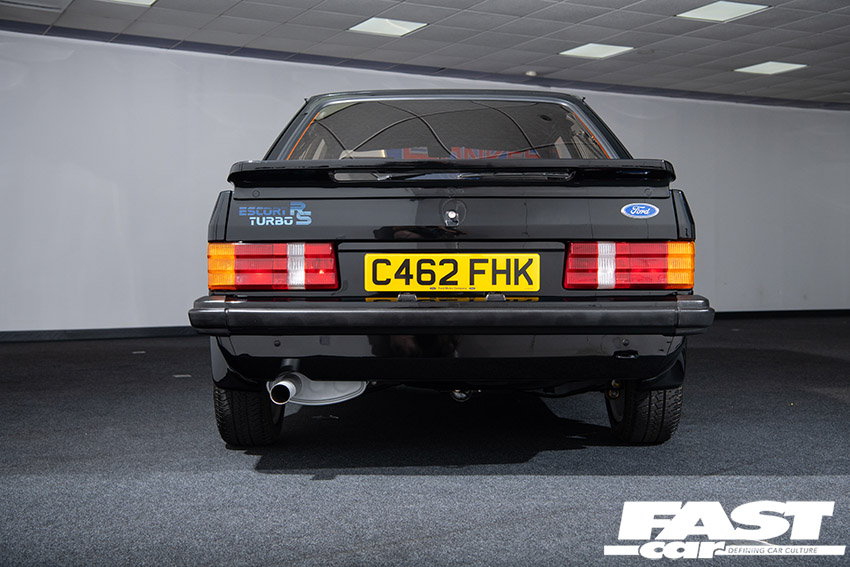 Harry had the solution. He had already been in talks with Fleet Street boss Jocelyn Stevens (one-time boss of the Daily Express and Daily Star, nicknamed Piranha Teeth and reckoned to be proud of his hard-man reputation as a ‘posh bully’ with a habit of for driving sports cars into lamp-posts; he’d also owned a series of so-called ‘souped-up’ Escorts) about building an RS Turbo in factory Black. The opportunity to produce one or two was too good to miss.

So in summer 1985, Harry turned to Geoff Fox to come up with the goods. As Geoff remembers, “You couldn’t get RS Turbos in black, so it was my job to get them together. This was all organised over the phone, as friends and favours; Harry was responsible for the order (it was a company car), and I was aware of its proposed user.” 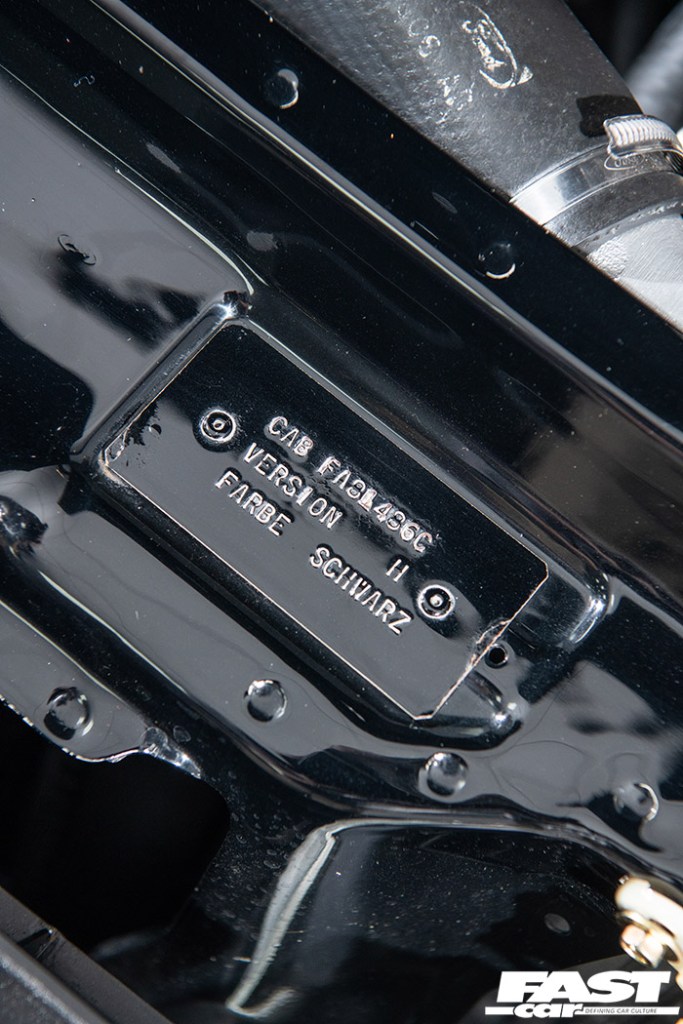 But it wasn’t a simple case of sending a few Escorts down the line with a different shade of paint in the gun. And, as Geoff says, “The complexity of painting the bodies off-line after assembly was too expensive, with a risk to paint quality. So the cars were all painted on line, as the black body colour was existing in the plant.”

What’s more, RS Turbos’ bodykits were supplied to the Saarlouis production line by Marley Foam, pre-sprayed in Diamond White. Geoff recalls, “I spoke with Gordon Pollard (sales director at Marley Foam), and we (SVE) raised a prototype order to cover the cost to paint the body dress-up kit, which were the only parts not available in the plant.” 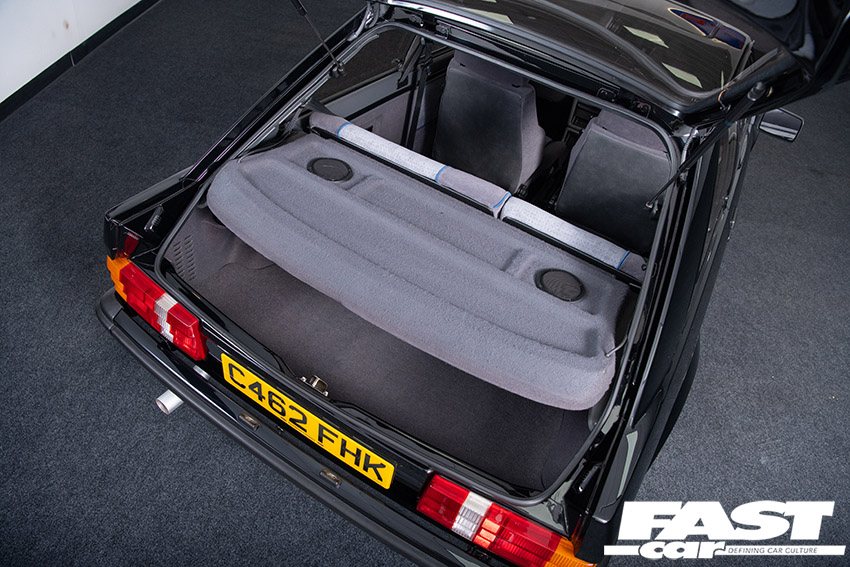 Three sets of black bodykits were supplied to Saarlouis, and three black Series One RS Turbos were built; none were factory-finished in any other colours, apart from white.

Of the three black cars, one was Diana’s Escort RS Turbo, another was for use by SO14 as a decoy car for would-be assassins and paparazzi photographers, and the third was supplied to Jocelyn Stevens, who had it chauffeur-driven. As far as Geoff recalls, only the Diana car had an Escort grille in order to look more like a regular Mk3; the others wore the typical Orion/RS Turbo part. All were supplied with blue RS decals and front driving lamps. 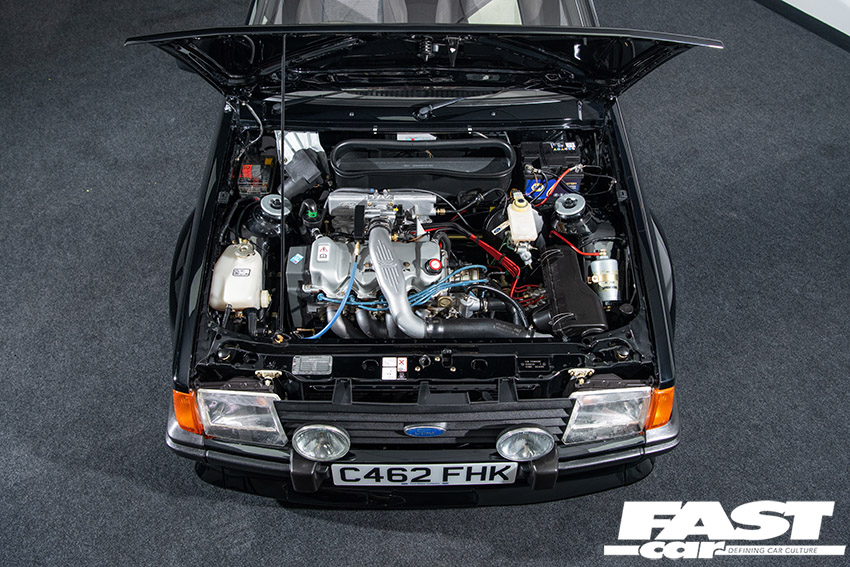 So as the Cabriolet was returned to public affairs (before being re-registered and sold), Diana was presented with the RS Turbo, registered C462 FHK; the decoy was C973 HAR. Registered on 23 August 1985, she used the RS Turbo as her everyday runabout; for nipping to fancy shops, lunching with friends, and attending high-profile events.

Typically, Diana’s passenger would be an armed bodyguard, so there was a radio in the glovebox (its cable still present today) and a second rear-view mirror mounted atop the windscreen. Contemporary photos also showed Di driving with then-infant Prince William in the back seat. 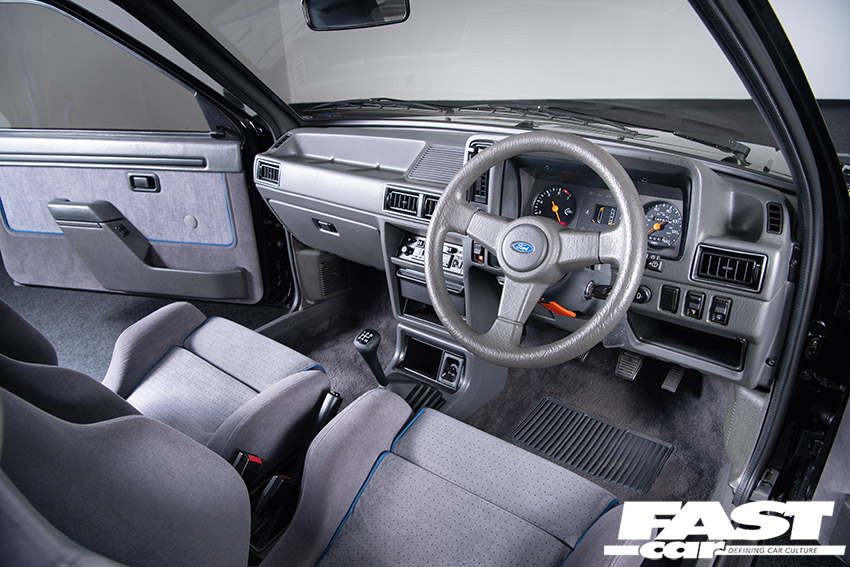 By the time the RS was returned to Ford in May 1988, it had covered 6800 miles – most with Diana at the wheel. It’s not know why it wasn’t replaced with a Series Two, although Di was snapped at the Guards Polo Club on 29 June 1988 while driving a Sapphire Cosworth; often thought to be Mercury Grey, the Sapphire was almost certainly Crystal Blue. Its registration number E876 EVW has disappeared without a trace.

Di went on to drive a Jaguar XJ-S V12 Cabriolet, followed by a Mercedes 500SL and then an Audi 80 convertible. So much for SO14’s insistence on her having a hard-top…

As for the RS Turbo, it was re-registered (as was typical for royal cars) by Ford as C515 DYT and sold to Geoff King, one of the firm’s managers, for his wife to use; he paid £2638. 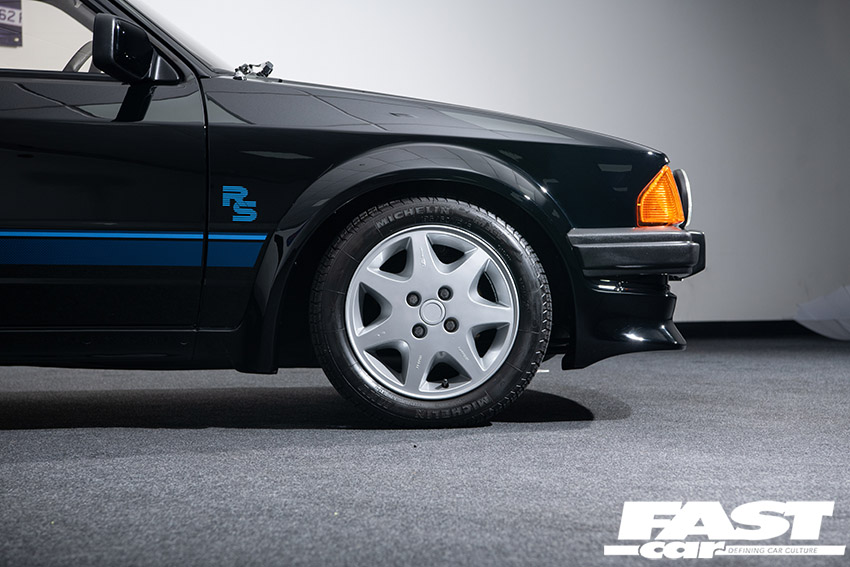 Diana’s Escort RS Turbo next appeared in the limelight in September 1993, when it was given away in a promotional competition by Kiss FM. The prizewinner, Miss Jones from Essex, received the car with 12,000 miles on the clock. She didn’t keep it for long because that’s when it came to the attention of the fast Ford fraternity – for its Rallye Sport heritage rather than its royal blood.

Blue Oval devotee Jeff Windsor tracked down the Escort and bought it in November 1994. Jeff used the car for RS Owners’ Club events, where interest grew in this one-of-a-kind machine.

Before long, it caught the attention of RS enthusiast Mark Bailey – better known to most Ford fans as owner of the Bonkers Collection. 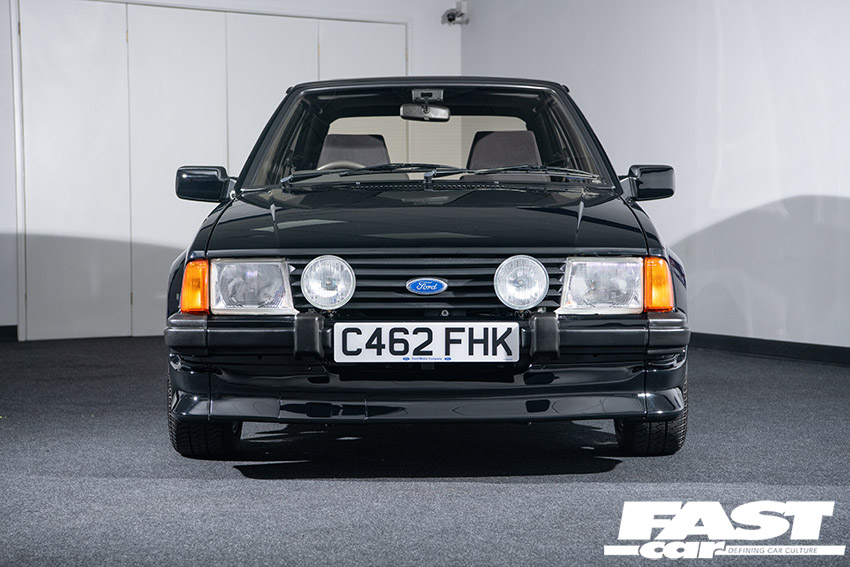 Mark says, “I approached Jeff through the club forum. It took me two years to persuade him to sell it, and I paid an awful lot of money for it at a time when very good 20,000-mile RS Turbos were going for £15,000.”

That was 2008, when the Bonkers Collection was starting to be the subject of much discussion on internet groups. Mark had begun buying the lowest-mileage, lowest-ownership RSs he could find; they had to be original and unrestored. This four-owner and hugely rare black Escort fit the bill perfectly.

Mark confirms, “I wouldn’t have bought it without the provenance. There’s an A4 box file packed with all the history, and a letter from Kensington Palace saying they were aware of the car, but had no photos.”

At the time, the RS was still wearing its non-royal registration number. But Mark soon rectified it with a trip to the DVLA.

He recalls, “In the press photo, Diana’s Escort RS Turbo was C462 FHK. DVLA could tell from the chassis number all the previous registration numbers, which confirmed that C515 DYT was the same car as C462 FHK. Di certainly drove this one.”

Mark asked the DVLA to return his Escort to its original identity, then began a process of further restoration. Mark’s mechanic, Keith, stripped the RS of its glass, engine and running gear and renovated every component. 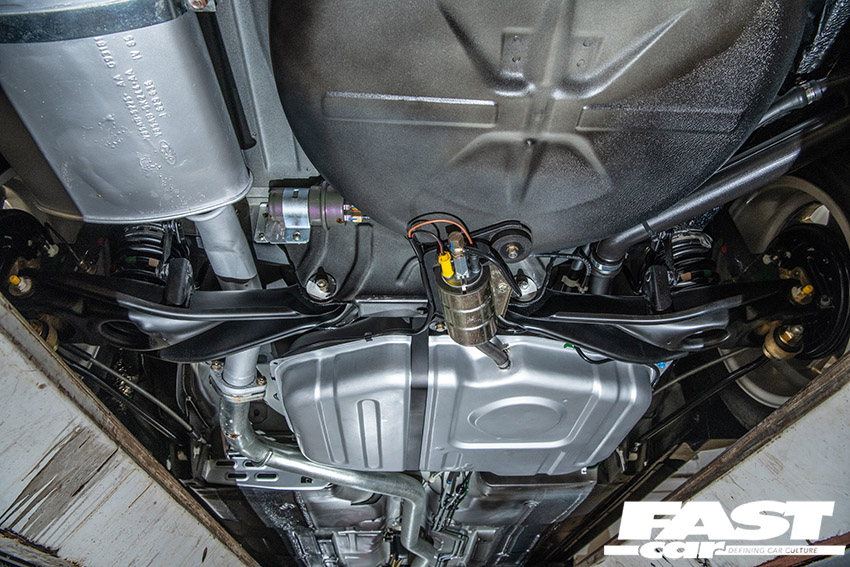 “We cleaned the shell, but kept the original panels and paintwork. We didn’t replace the parts – we just refurbished it all; we re-zinced nuts and bolts so everything is original but better than new,” adds Mark.

“When we took the factory underseal off, we did find someone had etched two initials into the shell, on the floorpan where it meets the chassis legs, before it was painted.” According to Geoff Fox, the initials were most likely inscribed by workers on the Saarlouis production line, aware that the Escort was a special order, but unaware of quite how special its intended driver would be. 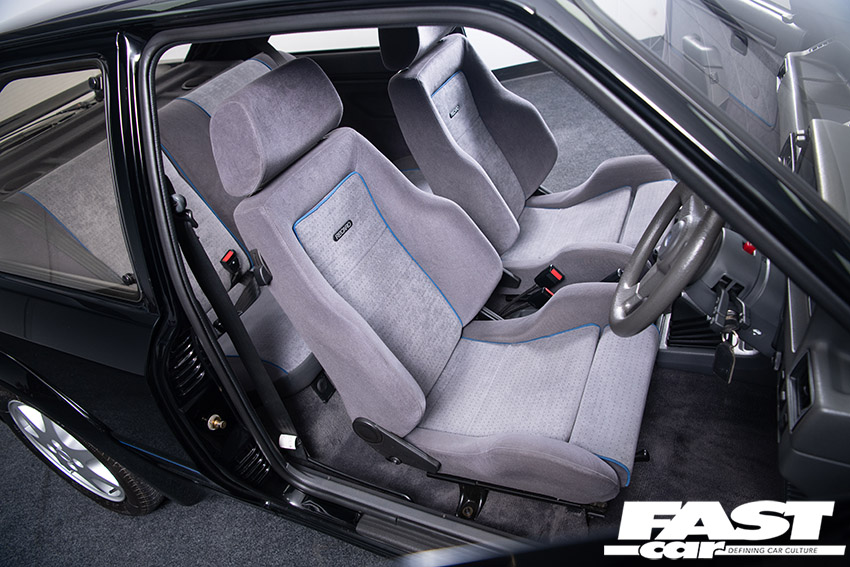 Sadly, Mark couldn’t bring himself to take the RS for a quick blast; he admits, “I’ve done about 200 miles in it in 14 years, just for the MOT and back. I’ve never used the car because it’s irreplaceable. To me, it’s so precious. This is one of one.”

Still, Mark’s an affable chap. He’s always been keen to show his collection to fellow enthusiasts, and Diana’s Escort – still showing just 24,961 recorded miles – has generally taken centre stage. “People get emotional when they sit in it,” he says. “People want to sniff the seat.”

Even so, Mark has decided it’s time to let someone take over custody of this unique Ford. After two years’ deliberation and five different people offering six-figure sums, Mark’s entered the Escort into Silverstone Auctions on 27 August 2022 – frustratingly after Fast Ford goes to print but before it’s delivered to your door.

Mark says, “I’m now semi-retired in Monaco, and I’ve nowhere to store it. I don’t spend much time in the UK, and don’t even get chance to look at the car.

“I’ll be there at the auction, and it’ll be an emotional day for me. I wear two hats – a car-dealer hat and car-collector hat. I do get attached to cars that I have fond memories of. 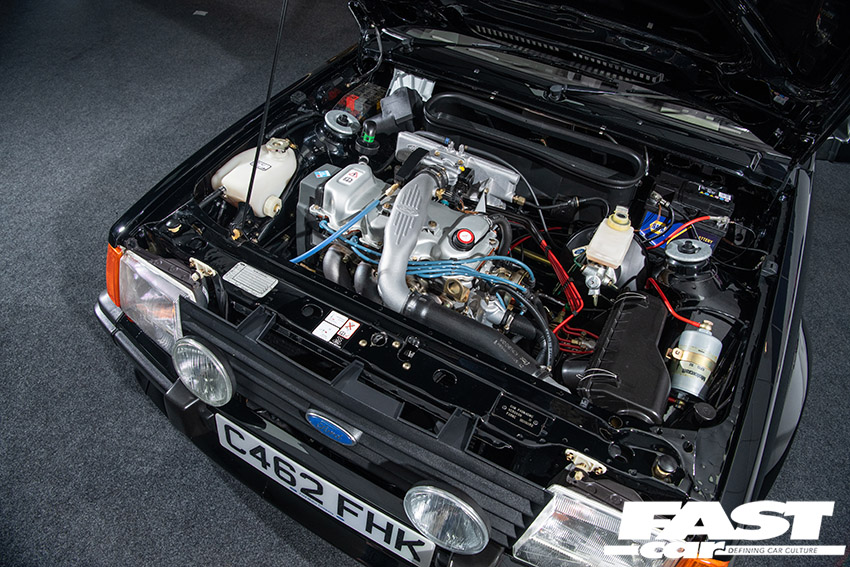 The famous Diana Escort RS Turbo was part of an impressive line-up of historically-important cars to go under the hammer at Silverstone Auction’s recent event at The Classic, Silverstone weekender. Alongside a host of other sought-after cars – including several other fast Fords – it was Diana’s Escort RS Turbo that stole the limelight, selling for an incredible £650,000.

This year marks the 25th anniversary of Diana’s death, and with several documentaries being released, plus all the current publicity surrounding the Royal Family, the People’s Princess will once again be at the forefront of the public’s mind. And that means, despite the hefty price tag this RS Turbo has probably already proven an appreciating investment.

Just like the Princess Diana, this RS Turbo is truly one of kind.