We’re always talking about how the modified car scene is a huge and friendly community, and the camaraderie at shows and on social media is a constant reminder of that. And when this scene crosses over with another that’s equally broad and inclusive, some truly magical things can happen. Just ask Jamie (aka ‘JustJamie’), owner of this wide-hipped Merlin Purple Pandem Nissan 350Z: “My job consists of playing games online for people to watch,” he explains, “and one day we were talking about modified cars and my viewers asked what car I would like. My dream was always an S15, but the prices were rising too fast so I said a 350Z would be amazing – the body shape is really clean. They told me to put up a goal for one (which is where viewers will donate money) for £6,000. Within 9 days the goal was reached, and I then live-streamed me purchasing the 350Z on the 10th day. Pretty crazy story to be honest!”

The car was found for sale locally, with low mileage and no rust, plus a few tasteful mods. The seller was in their fifties and had added an ARK GRiP V2 exhaust, a remap, and a set of 19” Rota Grids. An excellent base for a project, and Jamie could immediately see the potential, as the direction of the build was written in the stars from the off: he wanted to go wide, and a Rocket Bunny Pandem kit was the chosen way to do that. 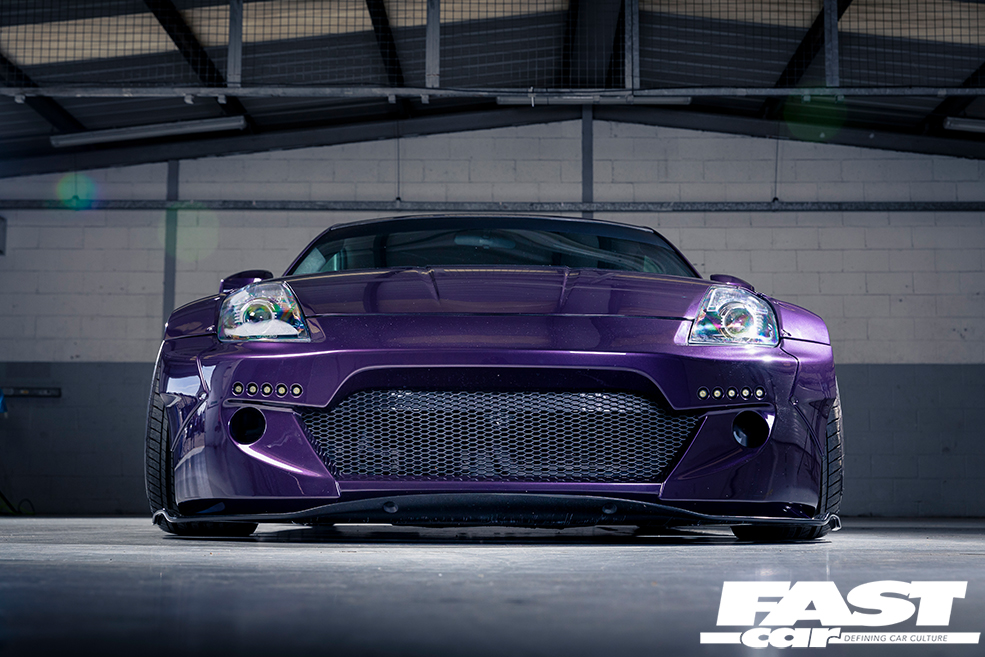 “I knew there were many Rocket Bunny-style kits in the UK, but luckily I have a friend in the USA who works at Hoonigan who was able to really hook me up,” says Jamie. “Corey Hosford is an ex-FD drifter and a friend of mine who helped develop the Rocket Bunny S14 Boss kit, and he told me that he was able to get a genuine Rocket Bunny 350Z kit a lot cheaper as he was friends with Kei Miura. We looked around and found only one place in the UK that sold the kit for £5,500; Corey explained that he could get it over half price off. So I sent him the money and then two minutes later I get an email from TRA Kyoto saying they would deliver. That email was sent on Tuesday, and on Thursday morning it arrived – a full, genuine Rocket Bunny Pandem V2 kit from Japan, and in two days I went from ordering it to getting it. Best decision ever.”

A couple of friends, Jack Bailey and Nicky Stock, were roped in to help fit the bodykit, and the guys found that it was surprisingly simple (well, surprisingly un-difficult at least) to fit; having been told that it would take a couple of weeks to mould a kit like that to the body, they found that buying the genuine gear makes a lot of difference and it all went on like Lego. The front bumper and arches were mocked up within a couple of hours, and because they were then waiting on materials to tub the rear arches, they cracked on with sorting out the suspension. 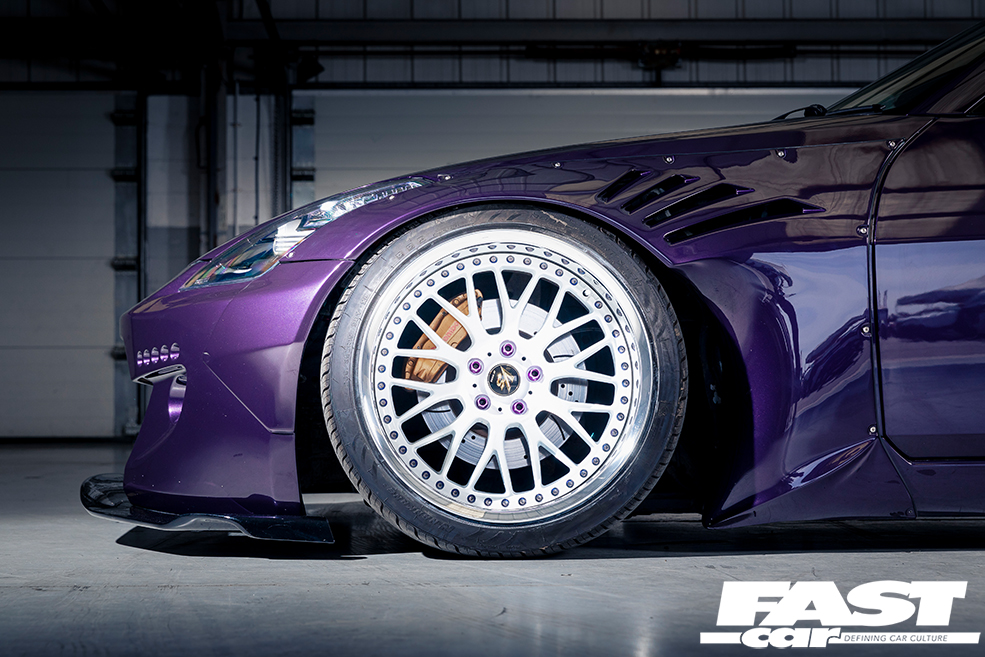 “I bought an Air Lift 3P setup before the kit arrived,” says Jamie. “Jack wanted to do a boot build so we started building, but then we ran into issues with the wiring as it was too short for what we wanted to do. Luckily we got it sorted, and then two days later we put the rear arches and the spoiler on. Hurdle no.1 was that when we started cutting the arches, we noticed a lot of white dust coming from the arch – yep, it was filler, which made me think it had had a little accident. After we got the kit on we went to hurdle no.2: do I buy more affordable wheels and put spacers on to fill the arches, or do I go all out…?”

Yeah, we already know the answer to that one. Fate certainly knew, and manifested itself in the form of a fella named Ryan who messaged Jamie to say that he had a set of WORK VS-XX that would be perfect for a Pandem Nissan 350Z. He hadn’t been planning to spend anywhere near that much, but it immediately became apparent that these were absolutely the right wheels for the project, so Jamie bit the bullet. 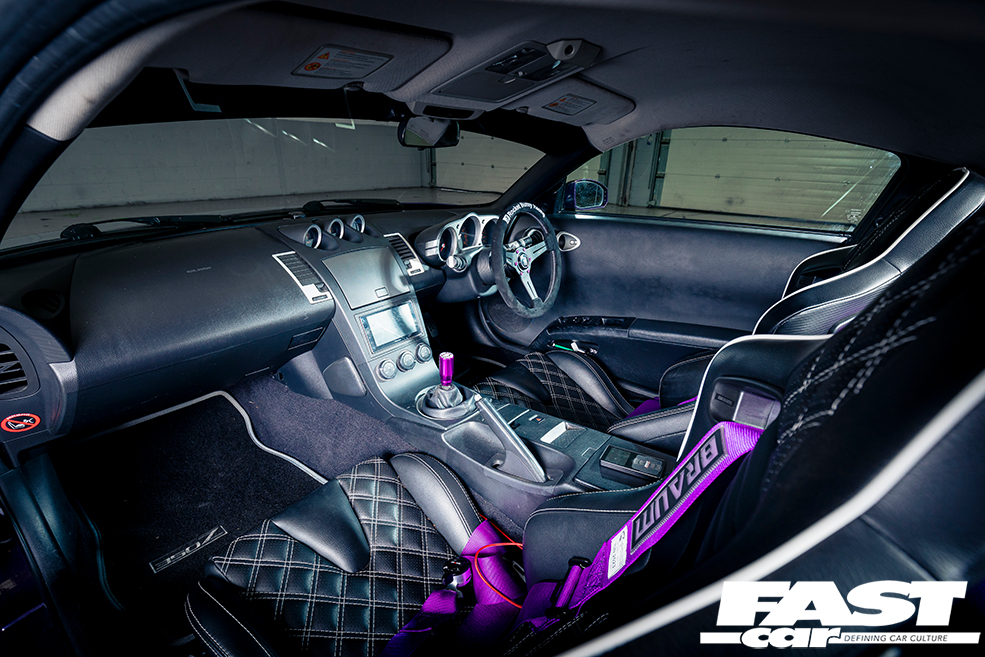 “When we got them on the car, it tucked perfectly,” Jamie beams. “To make it even better there were no spacers on the rear which shows with the insane dish. So now with the wheels, air-ride and bodykit sorted it needed to be painted: the car was silver, the kit was black and the rear bumper was red… again I was thinking of going for the more affordable option and getting it wrapped. I spoke to someone and got a quote, then that night a friend of mine – Jordan who owns InHausPaintWorx -messaged me asking if I needed someone to paint the car. I explained that I was going to wrap it to save money and he asked for the price; after I told him he said he’d paint it for the same price! So we agreed a date and a colour (Merlin Purple), and after a week of Jordan having the car I went to collect it. OMG, it was perfect.” 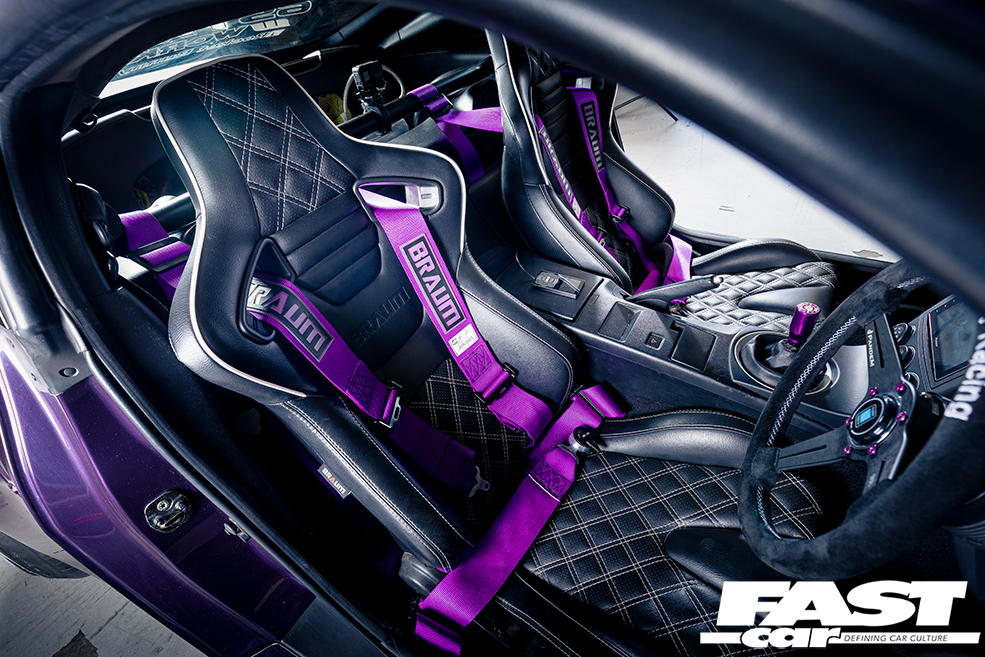 With some Braun Elite seats manhandled into the Nissan it was all starting to come together very nicely – so much so that Jamie picked up a Top-20 award at Ultimate Stance. As the show season was coming to a close he took it to as many events as he could, and all the while his brain was ticking over with new ideas to finesse the build. A custom stainless exhaust system was crafted, and the wheel centres changed from teal to white for a cleaner look. “One thing I know is to never change the wheel colour again,” he laughs. “From getting the faces powder-coated to the lips machine-polished, and then putting them back together with custom purple-anodised titanium bolts from my friend Charles, we then hit the biggest hurdle: tyre fitting. This was a nightmare! The tyres that were on the wheels before had a bulge so they needed replacing; we got some the same spec but they just would not stretch to the bead. After going to five different places to get them fitted I had to buy some bigger 325/30 Michelin Pilot Sport 4s. To this day I would still be putting them on if it wasn’t for the help of my brother Steven, who works as a mobile tyre fitter.” 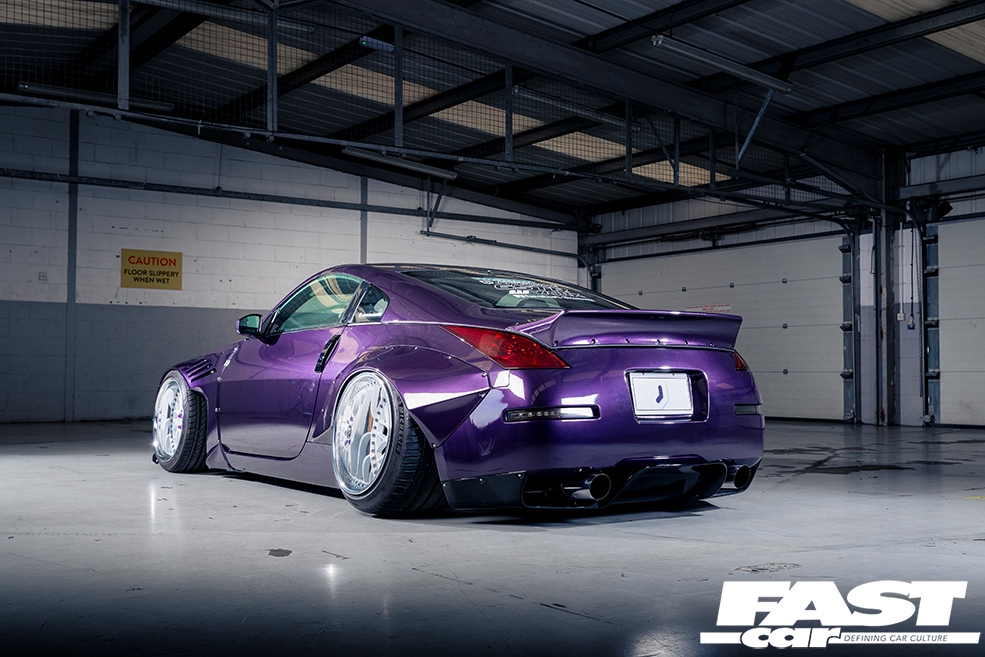 All character-building stuff though, isn’t it? And the final piece of the puzzle arrived when Jamie was able to get hold of a limited edition Rocket Bunny Racing steering wheel, one of just 200 released worldwide in collaboration with Nardi. And wouldn’t you know it, he’s got thinking about power mods now; not just bolt-ons or maps here, but in the true style of a gamer, Jamie’s thinking about dumping a 1JZ in there. Or maybe an LS. Because too much ain’t enough.

“When I designed the car, my goal was just to have one person take a picture of it,” he says. “When the build was completed I went to the Yakushi Show; I saw over thirty people take a picture and I was loving it. The next day there was another event and they loved it there too. Over the course of five months I went to as many shows as possible and before long I was winning trophies. It’s better than I could have ever imagined.” See, these things do come full circle. Inspired by one community, aided by another, and now appreciated by all – this car is vivid purple proof that we have a supportive and friendly scene. 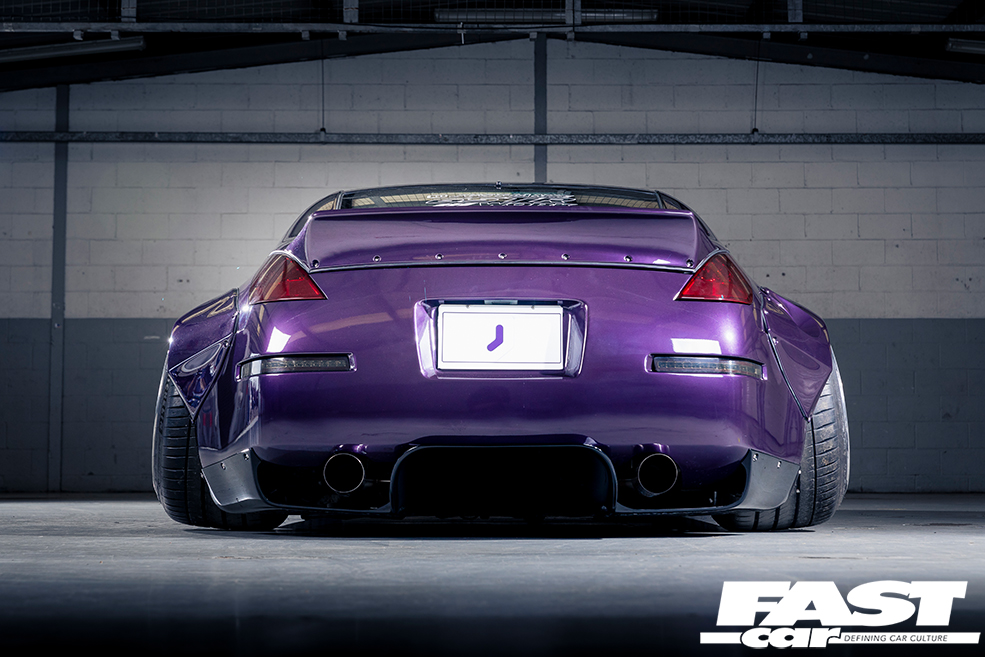