Looking to take on the famous Nordschleife? Here is your 30 step Nurburgring cornering guide to one full lap from start to finish.

1. We’ll start this Nurburgring cornering guide at the Nordschleife (Northern Loop) car park. On an average day you’ll be sharing it with about 100 other cars and 50 bikes. On a busy day there will be double those numbers parked opposite and on the roads nearby. Buy your lap ticket/s and head up to the car park style barriers. Drive slowly through the cones and start picking up speed once you’re out on the clear tarmac.

2. This bridge is where some people start the clock for their bridge-to-gantry lap time. Other people say only a fool would try to time their lap. You’ll already be travelling at a good pace by the time you go under the bridge, only the very fastest cars will need to scrub off any speed for the left-hand Antoniusbuche.

3. Take a classic racing line through the high-speed up-hill Tiegarten, using as little steering and as much track width as you can. The key is keeping it smooth and tidy.

4. Carry too much speed through any of the bends in Hohenrain or T13 and you’ll go wide on the exit, putting you in a very poor (and slow) position for the next turn, so make sure you don’t over-do it.

5. Hatzenbach to Hocheichen is a huge challenge of man and machine, with the track’s highest concentration of turns in one place and a small crest thrown in for good measure toward the final left. So if you’re a novice, don’t expect to be flying through here too quickly.

6. You’ll be accelerating hard going downhill after Hocheichen, so speed will be building fast. Big power cars will need to take some speed off before the crest to prevent going airborne. If you do go flying, you’ll find that braking for Flugplatz will be a big challenge/impossible…

7. It might not be that clear from the map, but this is a long and high speed section of track leading to the tricky left of Schwedenkreuz. The two crests can get you in deep trouble if you’re going too fast. 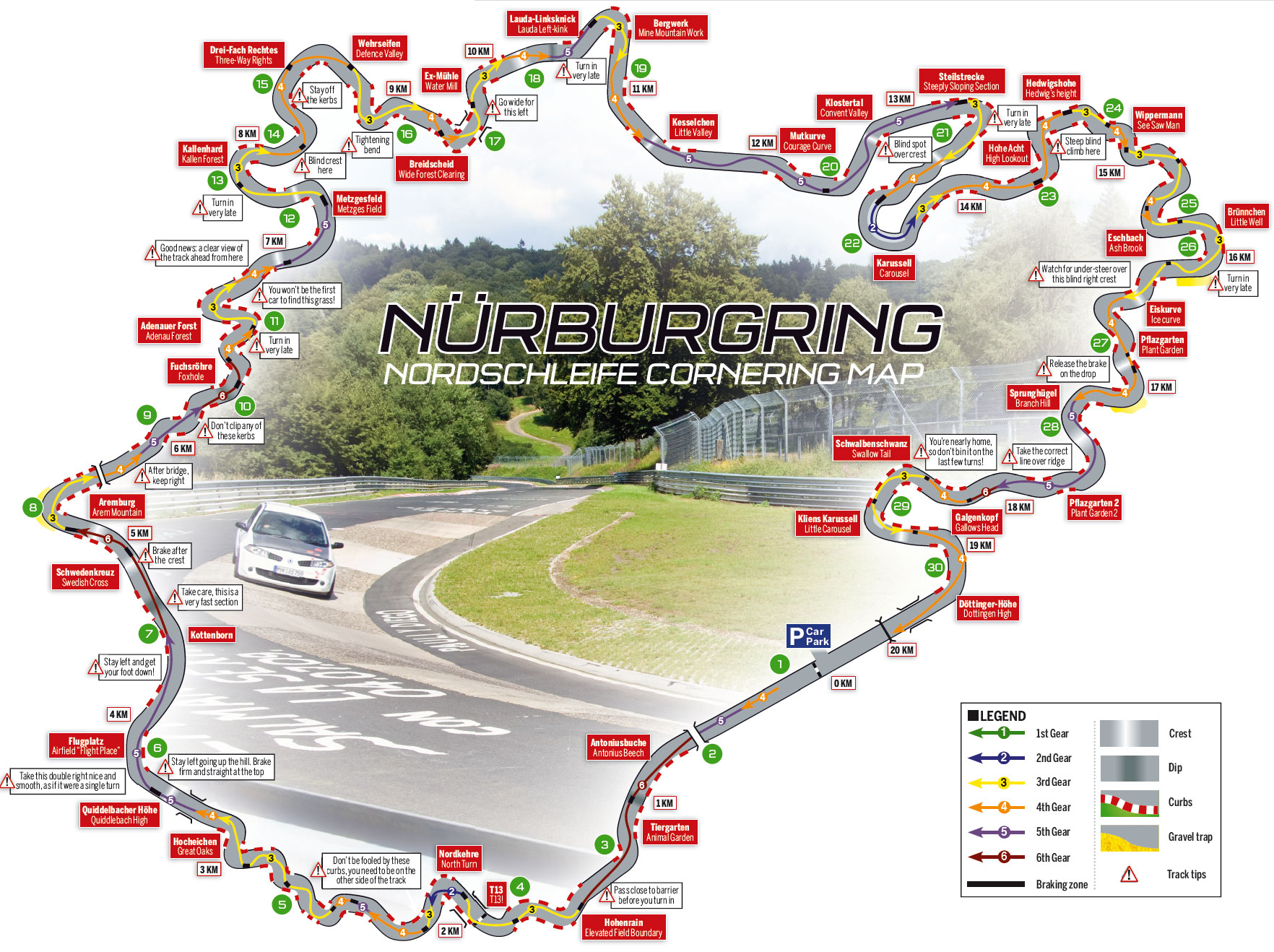 8. If you go too fast/wide round Schwedenkreuz you’ll be in a right mess for the next turn. Brake hard and straight on the left side of the track before Aremberg. Turn in late and feed the power back in as soon as is safe, using the full width of the track.

9. This section looks like a simple straightline job, but the sweeping curves are very long, so speed is high. The surface is also very uneven, so it’s not as smooth and easy as it looks. Take it steady at first!

10. Well-driven, lower-power cars will be able to take the left-hand Fuchsröhre virtually flat-out, best not try that out on your first lap though! When it comes to the right-hander, stay on the right or you’ll be in the wrong place heading up to the next (blind) left.

11. When it comes to beer time in the bars after the ’Ring has closed, you wont find many people who haven’t got it all wrong at Adenauer Forst – 99 percent of the time, during their first few laps. Do your braking on the far right of the track while heading up to the blind crest (brake at or after the crest and you’re way too late), then turn in very late and aim for the kerbs on the left side of the track, that will put you in the best position for the right-hand section where you nail the throttle.

12. Metzgesfeld is a very fast left-hander followed by some very heavy braking for the next (up-hill) left which leads to a blind crest. You need to start on the left as you head up the hill, then start moving across the track for the right-hand section, before going back out wide onto the left again.

13. You need to turn in very late for the righthand Kallenhard. The bend tightens as it goes round, so the apex is late. Don’t floor it until you can see the kerb on the left that you’ll be aiming for.

14. This nameless downhill left is a good challenge. As you start the left you get a good view of the next right, which you can take surprisingly fast – so it’s best to stay off the kerbs, which can be very slippery!

15. Forget three blind mice, think three blind rights. The unofficially named Drei-Fach Rechte, triple right-hander is the sort of bend you only find at the ’Ring. The first apex is the centre of the first kerb, then go out wide keeping the steering as smooth as possible, turning it into a single giant right. Find yourself next to the second kerb on the right and you’ve got the wrong line.

16. Next up, the right and then tight left of Wehrseifen. A bit of extra braking is needed as it’s a downhill section – make sure you’ve finished braking before you turn in for the right. Turn in very late for the left and get the power on once you’re straight, accelerating through the right-hander and using the full width of the track. 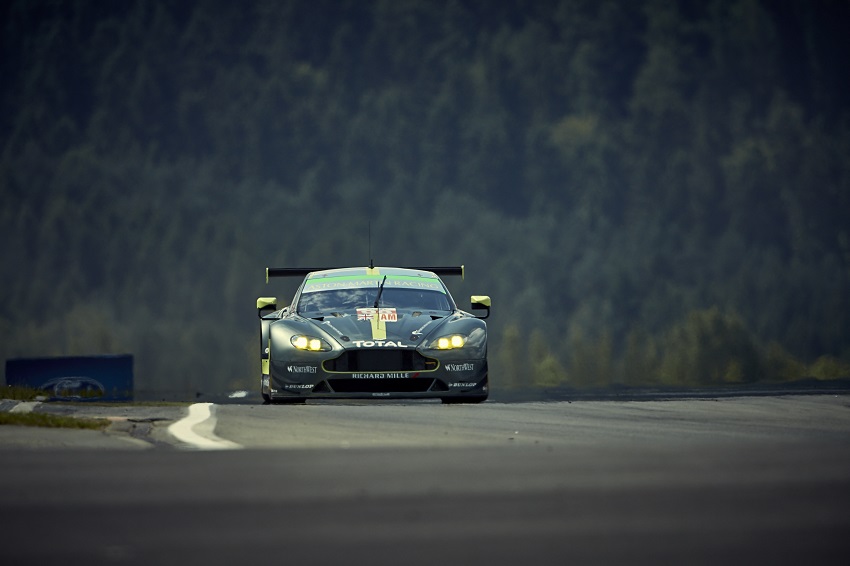 17. Experts will be heading down the hill toward the spectators at Breidscheid at over 100mph, so try not to give them anything worth posting on YouTube (ie, don’t stuff it here!). Go wide for the second left to give you a straight run up the hill.

18. The steep up-hill right of Ex-Mühle is like riding a tarmac roller coaster. If you carry good speed up the hill from the bridge, be careful near the top as the car will start to slide. Accelerate up to Lauda Kink and go in wide so that you’re well positioned for the big braking session and very late turn in for Bergwerk.

19. And here begins an awesome high-speed drive through the forest. In lower-power cars it’s great fun seeing how much speed you can put on, with more power, concentrate more on keeping it smooth and keeping it on the black stuff.

20. Get out nice and wide for the left before Klosteral, speeds can be very high, so get it wrong and the cost/damage/pain will be equally great. Get over onto the left for the entry to Klosteral.

21. After your high-speed drive, things slow right down for the right of Steilstrecke. The bend tightens, so you need to turn in very late for a late apex. Accelerate out wide and you then get a clear view of the straight run up to the Karussell.

22. The famous 30 degree banking and 180 degree turn of the Karussell is very bumpy and puts a huge load on the suspension, so while it looks great, it’s doesn’t always feel that nice. You might be surprised at how late you can brake into it once you start to get the hang of things. 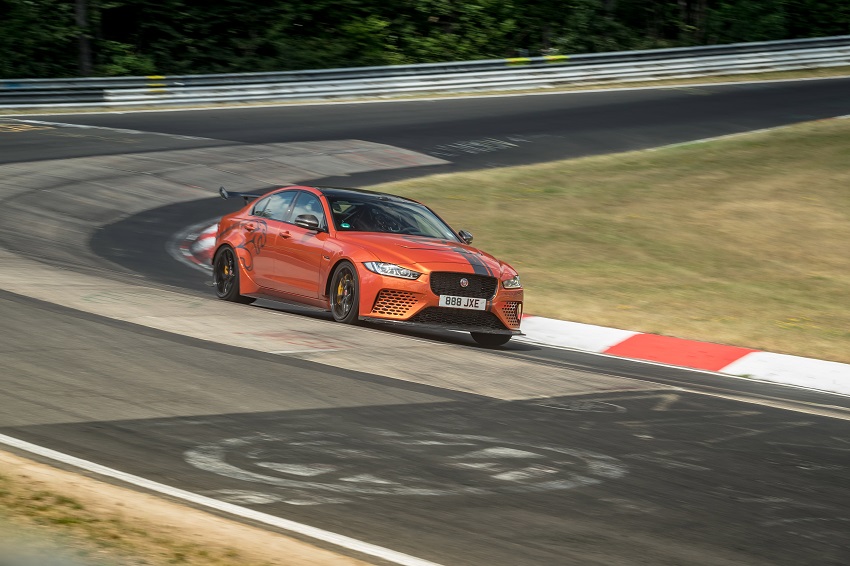 23. The climb up the steep and blind Hohe Acht reminds us of Ex-Mühle, but better. Practice makes perfect here (no shit), you’ll know when you’ve got it right from the deep satisfaction you’ll feel. Watch out for the kerbs, they’re steep and nasty.

24. The track feels very thin here as you connect the turns, but the shortest distance isn’t always the fastest route as some of the bends require later turn-ins and exits than others.

25. There are cobbles on the exit of the righthander before Eschbach, but don’t be tempted to steal a few extra feet of track by using them. Make sure you’re on the right for Eschbach and turn in late.

26. You’ll tell yourself to ignore the crowds of people at Brünnchen, but it’s very difficult not to be a little distracted. Don’t go out too wide on the exit of the second right or you’ll be on the wrong side of the track for the superb blind right crest of Eiskurve.

27. The run down the hill to Pflazgarten is a nice stretch. If you’ve been playing a ’Ring game before you drive it for real, you won’t be prepared for the track dropping away from under you like it does. If you’ve still got your foot hard on the brake as you go over the ‘ledge’ you’re likely to land with a skid, so brake before and after, but not during the drop.

28. There are lots of crests on the ’Ring, but this one is probably the biggy. Going airborne isn’t really a problem, but the landing and subsequent right can be. It will vary depending on car, speed, suspension and your line. The next high-speed right-left over a crest is a great combo.

29. You’ll be approaching Schwalbenschwanz very fast, so it needs a cautious head if you’re going to get the right line. The last significant left on the track is the mini Karussell it’s far less aggressive than the real thing and can be driven faster, so the risk of getting it out of shape is potentially higher.

30. Turn in for the blind sweeping right of Galgenkopf toward the end of the kerb on the left. Hit the apex mid corner and start heading out left. Build up speed on the long right of Dottinger Höhe ready for the final straight. Don’t get carried away and go screeching up to the exit. Give your car a rest and get ready for the next lap!

That concludes our 30 step Nurburgring cornering guide. Now go and drive it!