We sat down with Wizards of Nos to separate the truth from the myths when it comes to using nitrous oxide on your car as we answer some of the most common questions surrounding Nos.

Can I use nitrous oxide with a turbo?

Nitrous is perfect for turbo applications and not just because it massively cools intake temperatures before it even enters the engine. As nitrous allows more oxygen to be burnt in the cylinders more quickly, the quality and quantity of exhaust gases leaving the engine increases, which works wonders. On large turbo cars it helps them spool more quickly and can act as an anti-lag system, on smaller turbo cars it helps them continue to make boost where they would normally run out of puff. For this reason, using nitrous on turbo cars will always see a significant gain, more than the injector size may suggest. In fact, it can be as much as double; a 25bhp shot can give up to 50bhp. However, it’s not all good. If the wastegate can’t get rid of the excess exhaust gas in time then problems arise, and also using nitrous can sometimes confuse AFR gauges giving wrong readings. Lastly, it’s easy to get carried away as too much too quickly causes an aggressive flame speed which will ultimately end in tears. 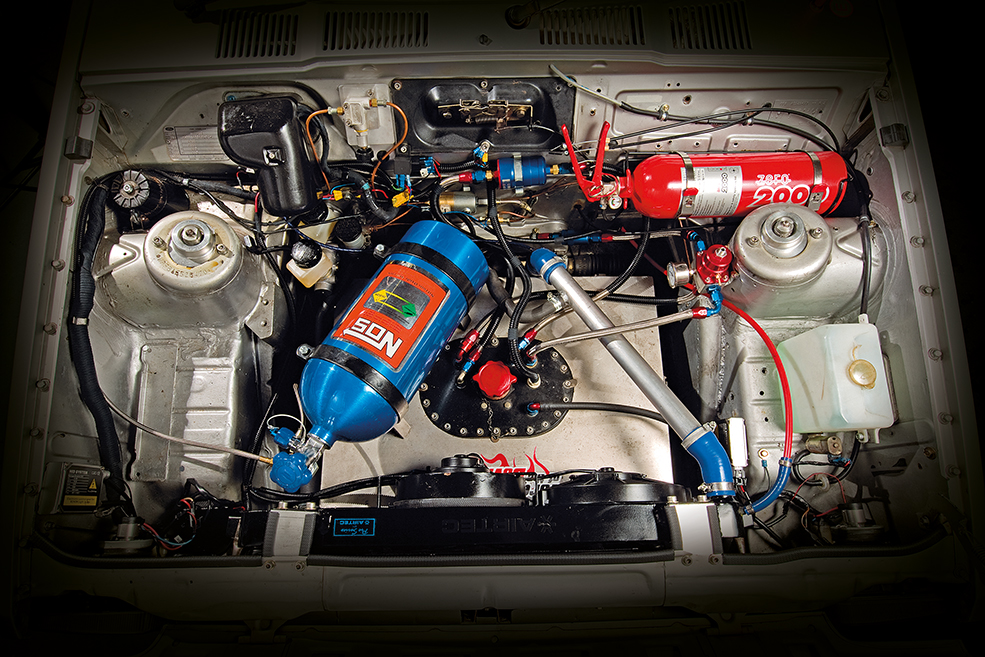 How do I work out what size injectors to use with nitrous oxide?

Start small and work your way up is the general rule of thumb – but then it depends on the type and spec of engine, too.

There is no given rule to say what you can or cannot have. As a very general guide the maximum you can add is half the horsepower of the standard engine, but beware, there are exceptions either way. A safer rule to stick to is around a 50bhp straight shot or 100bhp on a progressive controller, which feeds in the nitrous more slowly and at the right times allowing you to use more. With a stronger engine you will find they won’t blow up, they just stop making power — you will struggle to break an engine using nitrous without major tell-tale signs first, like melted plugs.

Nitrous and the law

The legality of nitrous has always been a concern for users. WON state that there is currently no law that states fuel additives and oxidisers cannot be used, which is what nitrous oxide is (there is a law banning rocket fuel though!). As long as the insurance company has been informed then it’s legal to use. You do not need a compressed gas warning sticker on the car either, only commercial vehicles do. WON would recommend you do though, in case the worst ever happened. Where you may struggle is finding an insurance company who are happy to cover your car with a system fitted (try specialists such as Adrian Flux, Brentacre, Greenlight, or Need To Insure). Make sure you will continue to be covered before you fit a kit. 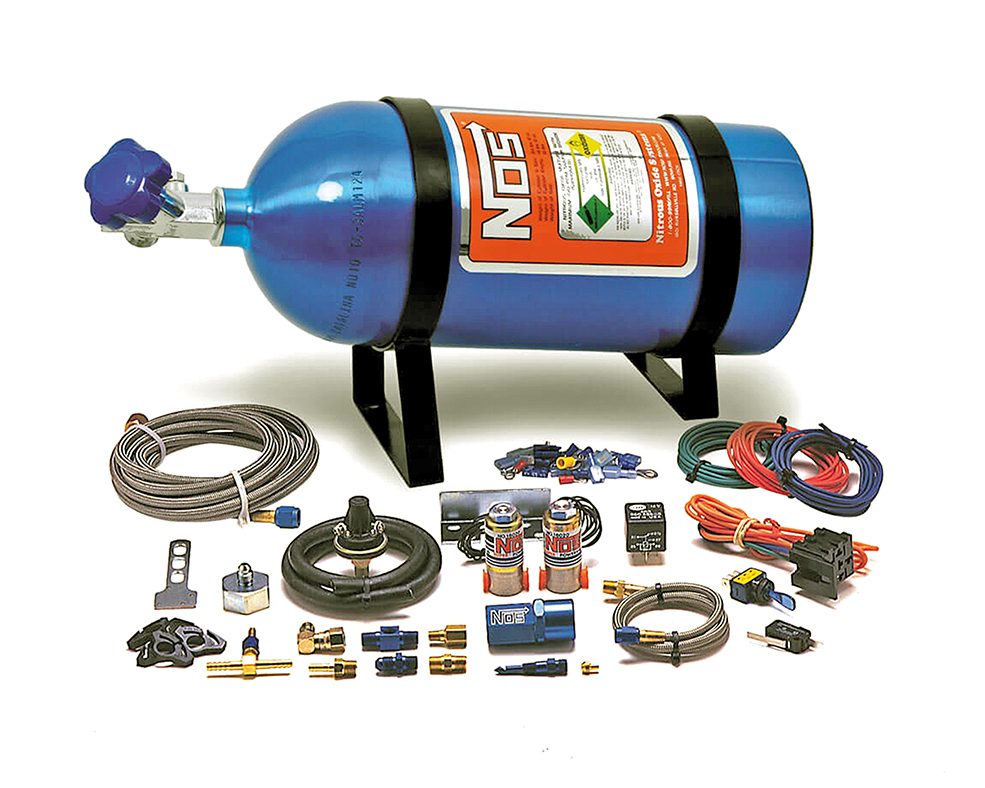 How easy is nitrous to install?

There really isn’t that much to installing a kit and WON suggests anyone who has a decent grasp of mechanics can fit a system. Mounting the bottle and solenoids together with running the lines is simple stuff, as is the basic wiring required for the electrics. Fitting a micro-switch as a trigger can be tricky on some cars but you can make life easier for yourself by fitting a WON throttle position unit instead. Installing the jets into the inlet manifold and tapping into the fuel lines is slightly more involving, but certainly nothing hard. There is now a wealth of information available making it as easy as ever to gain advice if you do get stuck.

What are the advantages of using nitrous oxide?

The main benefit of using NOS is it contains more oxygen than air, which helps the engine burn more fuel to make power. As it’s a simple principle, it becomes very cheap and easy to increase power quickly, and importantly it can be turned on and off as and when you wish, unlike other performance enhancers such as turbos or superchargers.

What are the disadvantages of using nitrous oxide?

Having to refill the bottle is the main one, although there are more suppliers and a home delivery service now. Another downside is that nitrous performance is temperature and pressure dependent so on a very cold day it won’t work as well unless you add a bottle heater. Lastly, it’s easy to get carried away, which leads to engine failures (though WON school their customers, in order to minimise this risk). 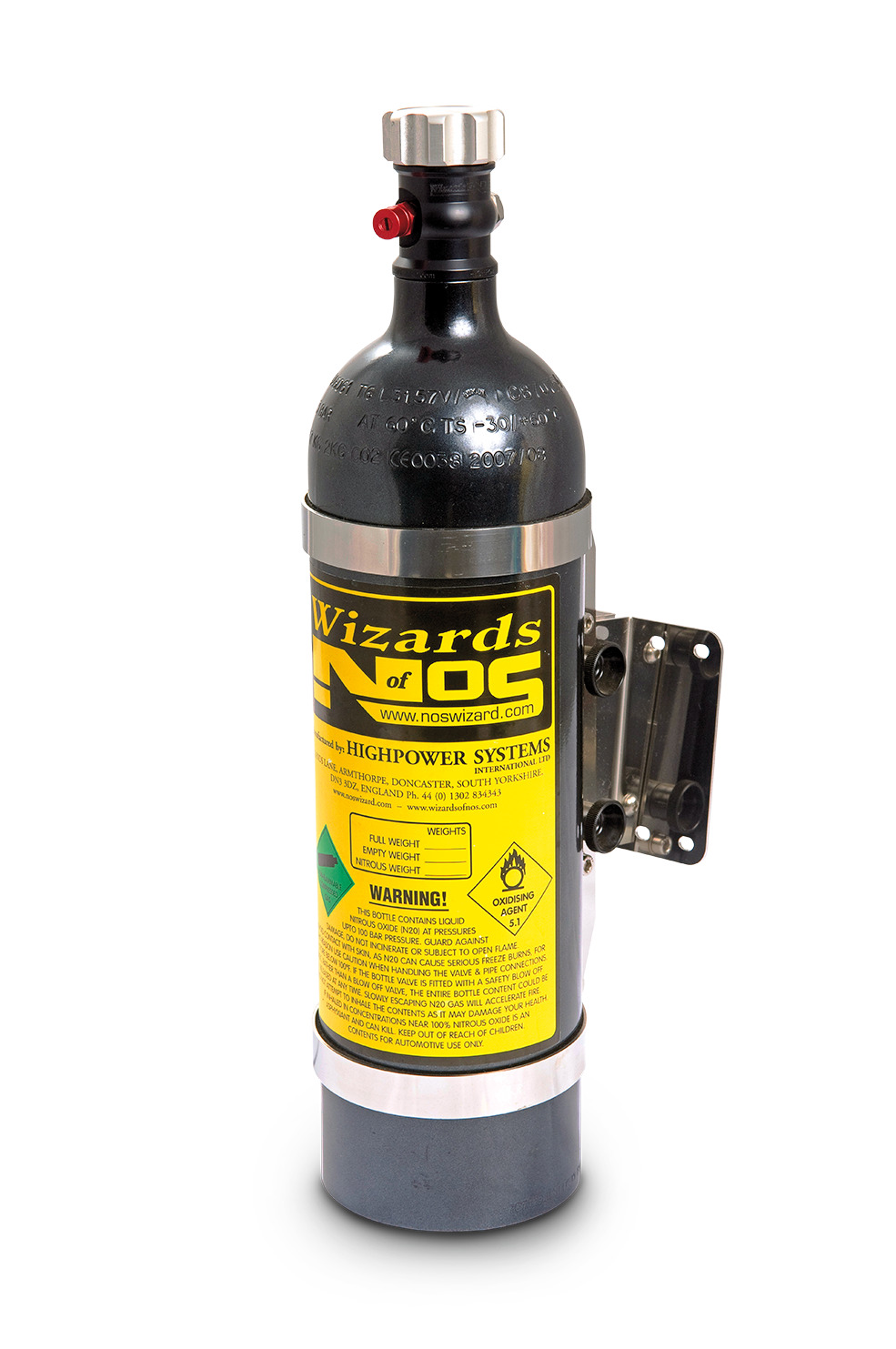 Do I need to upgrade my fuel pump or carbs when installing NOS?

Intake systems like carbs normally don’t, as a common wet kit system supplies its own fuel. For the fuel pump you need to know the capacity and flow rate of the pump, but tests can be done to show this and a majority of cases they can cater for most upgrades.

It’s a performance enhancer like any other, if it’s not abused with greed and ignoring obvious signs then it poses no threat.

You get more use than you think, but using a big jet and small bottle will always cause you to run out quickly.

False. It still relies on the engine’s original principles and gearing – and simply cannot change them.

Most wear happens on start-up, so using nitrous changes nothing. It’s only on for seconds at a time, so it’s relatively insignificant.

It’s not flammable by itself. It’s purely an oxidant and is perfectly safe to use and carry if installed correctly.