No more V8 for the muscular Mercedes-AMG C63, but the new saloon and estate cars come in with 680hp from the 2.0-litre hybrid engine combined with AWD.

The beating heart of what made the Mercedes-AMG C63 so brilliant over the years is now gone. The thunderous V8 has now been replaced with a four-cylinder turbocharged engine nabbed from the C43 model, assisted by a 204hp 2-speed electric motor.

In total, the new Mercedes-AMG C63 produces a whopping 680hp, thanks to the inclusion of the most powerful four-cylinder engine ever produced for a road-going car, the M139, which alone produces 476hp. Up from 406hp in the C43 thanks to a bigger turbo. 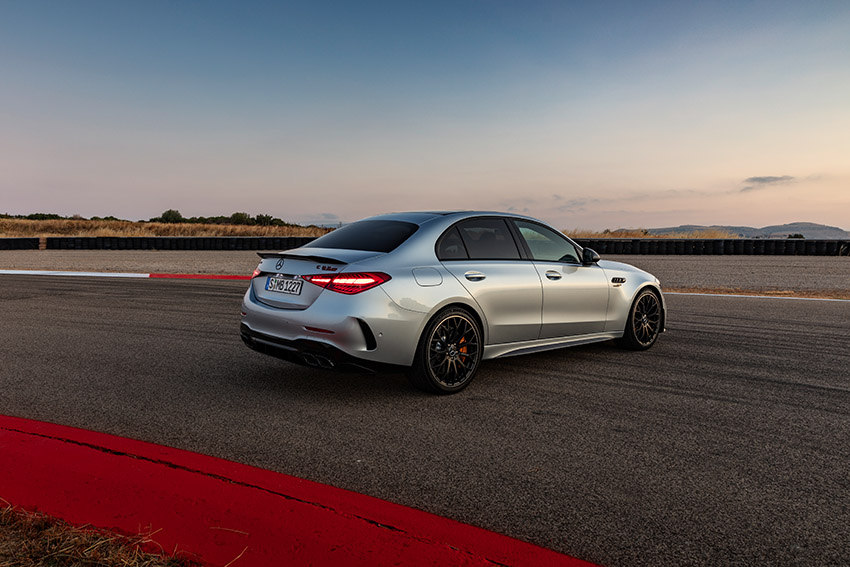 Technology trickled down from the Formula One team means that the new Mercedes-AMG C63 gets an electrically assisted exhaust gas turbo, which aims to eliminate turbo lag altogether.

Now here comes some serious numbers from the Mercedes-AMG C63; it gets a whopping 638lb ft of torque. Thanks to its AWD drivetrain, 0-62mph will arrive in just 3.4 seconds, that’s for both the saloon and the estate versions (still want that M3 Touring?). Top speed is limited to 174mph if you tick the right options. The kicker? It weighs 2111kg for the saloon version, and 2,145kg for the estate.

In more familiar territory, the 9-speed MCT gearbox is standard fit, as is the electronically controlled limited-slip differential, and as mentioned, it features AWD, labelled 4Matic, and includes Mercedes’ new toy, Drift Mode. 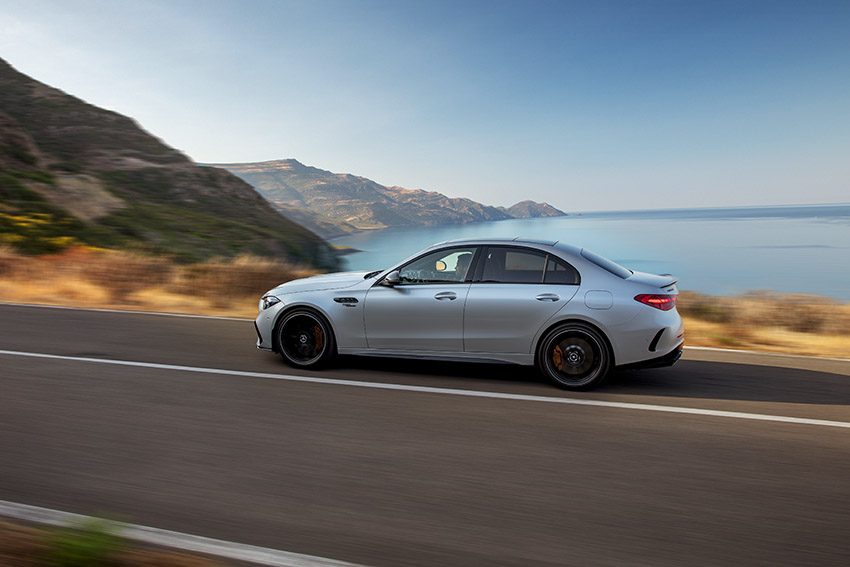 The idea with the Mercedes-AMG C63, like with other performance hybrid models in the Mercedes lineup (think GT 63 S E Performance), the aim was to improve performance for minimal weight gain rather than eek out mileage with range extenders. So, while you’ll only get to travel 8 miles on electric charge alone thanks to the 6.1kWh battery (70kW output), you should be able to achieve an average 41mpg when combining it with the four-cylinder engine. Not bad for 680hp and almost the same in torque…

The inclusion of the battery on the rear axle of the new Mercedes-AMG C63 also means that this can dictate the level of traction over the rear wheels as it works prior to the stability control intervening. Presumably if the car thinks the slide is controlled, the stability won’t intervene at all, but step too far sideways and it will pull you back in safely. 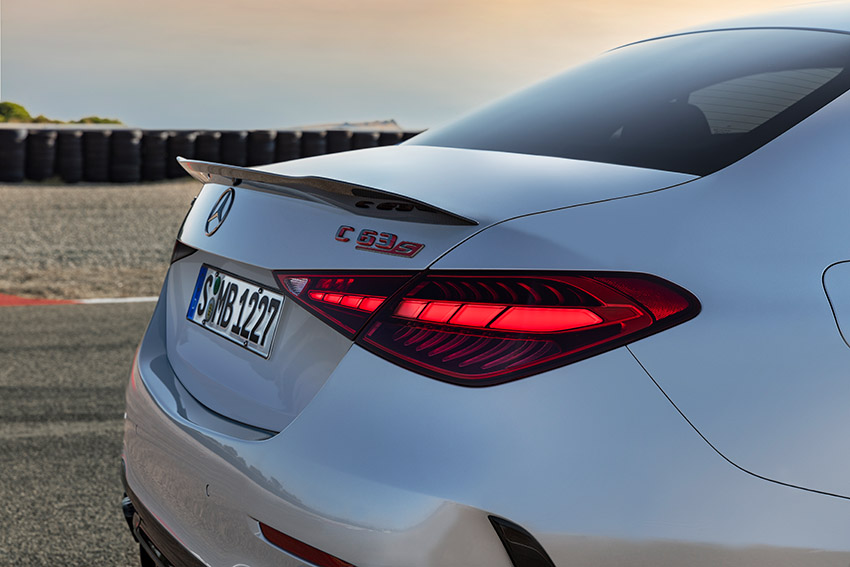 Inside, there are 8 driving modes to choose from under the Dynamic Select; electric, comfort, battery hold, sport, sport+, race, slippery and individual. They’ll all have their place, we’re sure, all adjusting various different throttle inputs, damper settings and so on and so forth. Overkill? Perhaps. We’ll judge that once we drive one! All we know is that apparently in race mode, the C63 ‘offers a slightly oversteering vehicle balance, more direct steering and more agile turn-in behaviour’. Sounds fun!

Those wondering how the new four-banger Mercedes-AMG C63 will sound will have to wait, but Mercedes says that the use of internal speakers is in place, which is achieved by recording the sound of the engine before enriching it. Let’s not pretend we were expecting anything like the sound of the old V8s, let’s be honest… 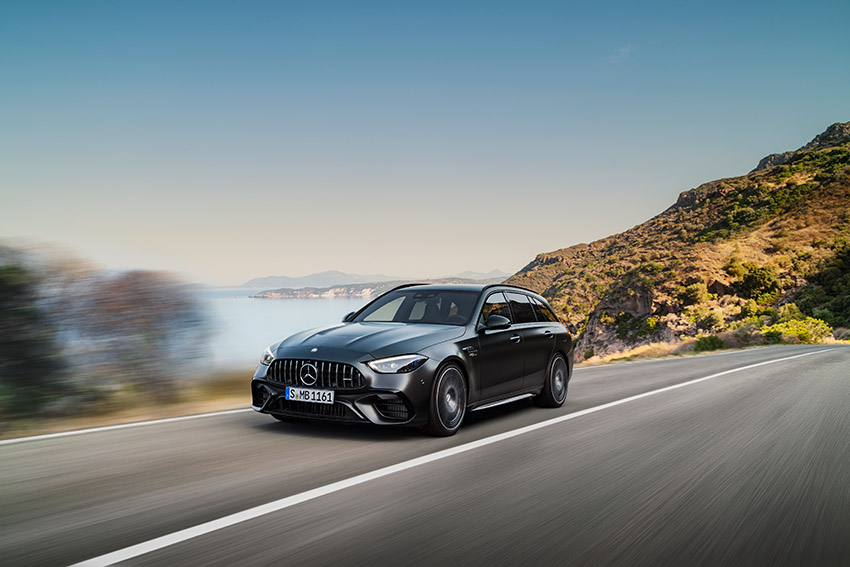 It’s business as usual for the Mercedes interior-wise, with it following the C-Class recipe, while adding some neat AMG touches, including sports seats and a performance steering wheel. You also get E Performance badges, and customers have the option to upgrade to lighter seats and plenty of Carbon Fibre. Speaking of which, there are two Carbon Fibre exterior options also available, as well as two AMG Night packages and an AMG Aerodynamics package. 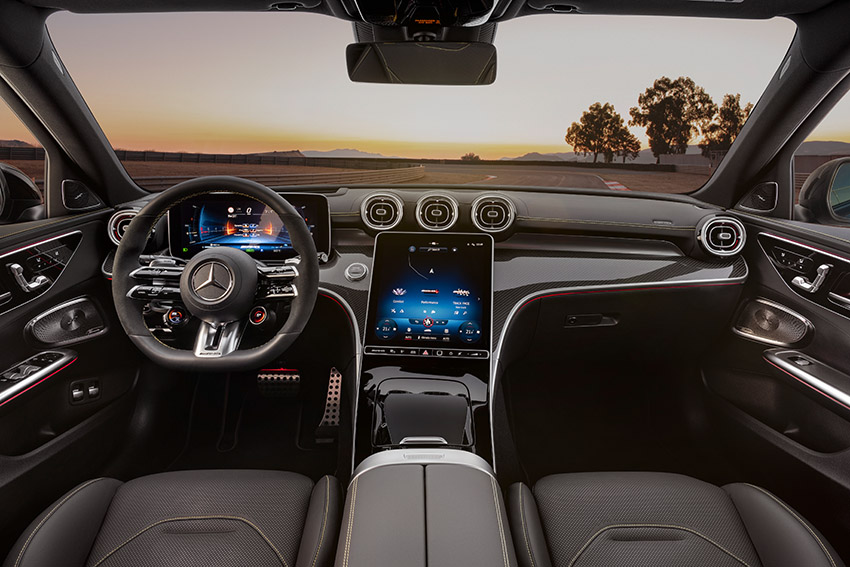 AMG’s Chief Technical Officer Jochen Hermann, said: “With its Performance hybrid drive and electrically assisted exhaust turbocharger, the new C 63 S E Performance is a technological masterpiece that takes a new approach. The electrified powertrain offers a whole new driving experience. The immediate response of the electric drive at the rear axle, the rapid torque build-up as well as the fast power output and also draw of our battery are very special features. Add to this the standard-fit rear axle steering and the fully variable all-wheel drive with Drift Mode – the new C 63 once again illustrates the high level of technical expertise that AMG possesses”. 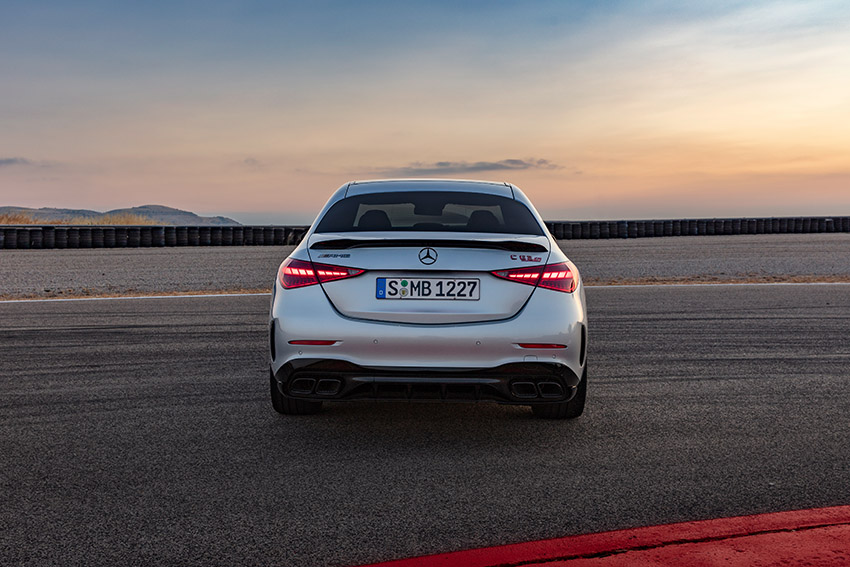