When a water-cooled VW goes down a storm at the hot rod school of excellence that is the SEMA show, you know it’s going to be a winner. Aaron Stehly has hit the jackpot with this modified VW Rabbit Mk1.

As our scene matures we are seeing more and more serious builds and Performance VW always strives to get the scoops on the latest and greatest but this modified VW Rabbit Mk1 takes things to another level, even by our standards. For many, Aaron Stehly won’t need an introduction. The 38-year-old Minnesota based serial dubber has worked his way up through the cycle industry and is now Director of Education for Quality Bicycle Products.

In Volkswagen circles he has made a name for himself both in the modified scene and in professional racing since getting his road license in 2000 and then shortly after, with the encouragement of his uncle, achieving race licenses through Skip Barber Race School. Eagle-eyed readers will remember Aaron’s TFSI Rallye from our June 2015 issue which was a cutting edge conversion back then. 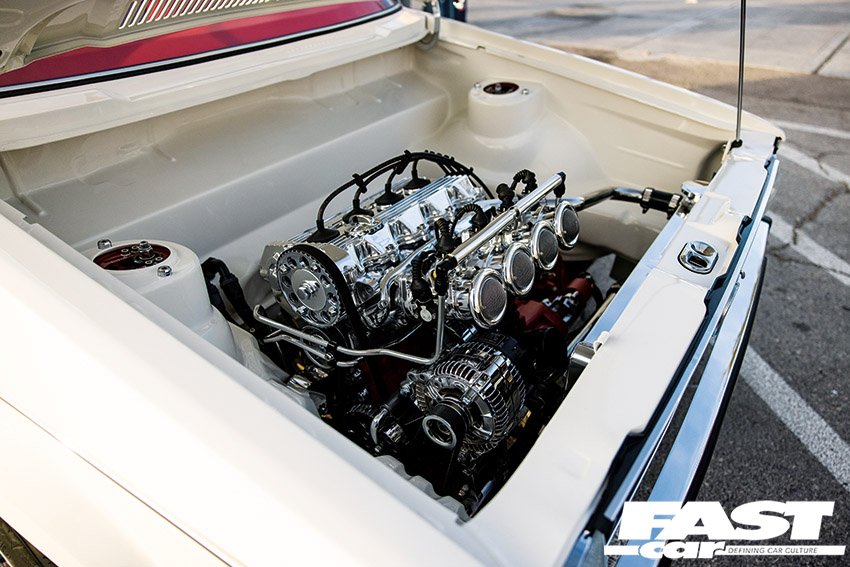 With deep optional Recaros and staggered 16” BBS RS wheels, it looked the part too. Back then the Mk1 Rabbit was already in build and the impressive Rallye was merely a side project to enjoy driving in the meantime. We’re pleased to hear he still owns it. Aaron explained back then: “I have set my heart on accomplishing the level of build that the MIVW crew in Holland is known for so it might be a few years before it’s done”.

Checking in with Aaron at the time of writing (late March 2022) revealed that the car had been a labor of love for 11 years and that the PVW exclusive was the icing on the cake. There’s no rushing perfection.

At the tender age of 16, Aaron’s first car was of a domestic flavor and whilst the 1975 four-door Chevrolet Impala was capable of muscle-bound burnouts, he favored something more agile and modern. He duly seized the opportunity to buy a 1989 Mk2 Golf GTI 16V just before his 17th birthday. This is where the VW bug hit hard and the car was treated to a roll cage, Ronal R10s, and as per the fashion at the time, big bumpers, shaved hatch, Bonrath single headlight badgeless grille and a huge dash-mounted tacho and change light. 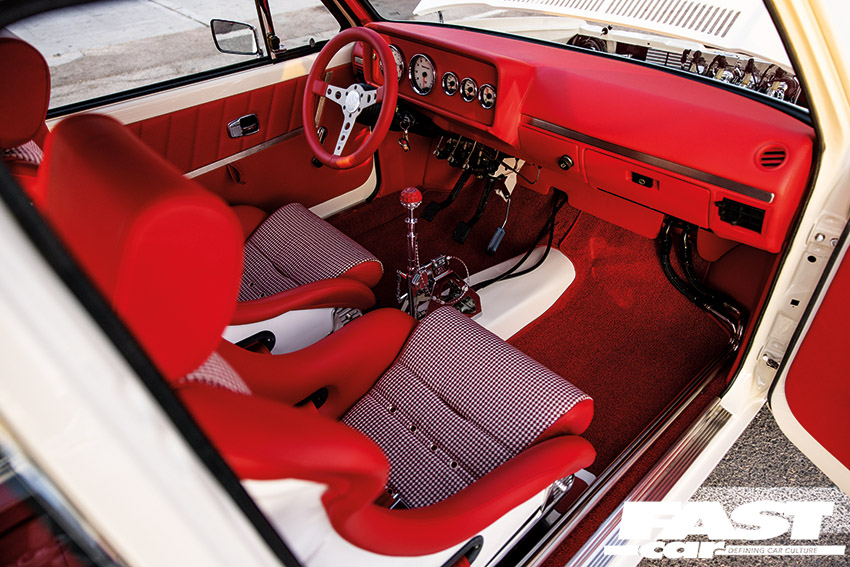 Once Aaron’s race licenses were obtained, he bought an ’83 Mk1 Rabbit GTI that was his first race car and was an assault on all the senses with its welded differential, open headers and straight-through exhaust. Scene veterans may remember Aaron’s black ’83 GTI road car that got the Euro treatment with round lights and non-Federal bumpers, Corbeau buckets, half cage and (for the time) a brave 1.8T conversion that was installed with the help of his friend, Jack. This car was featured on the VW Vortex forum home page back in 2003 and represents the “first serious build”.

A sea of other road cars have been and gone including an Audi 5000 and various Mk1 Rabbits including a couple of convertibles, Mk2 Golfs and Sciroccos. Aaron managed to combine modified VWs and his day job with an impressive run in Sports Car Club of America (SCCA) tin-top racing. His trophy cabinet bulges from time on the grid in such cars as his aforementioned Mk1, a Mk3 Golf Sport and a Mk5 Golf GTI (which he still owns). Aaron was an alternate driver in the VW TDI Cup series and raced for tuning giant, APR. Impressive stuff. 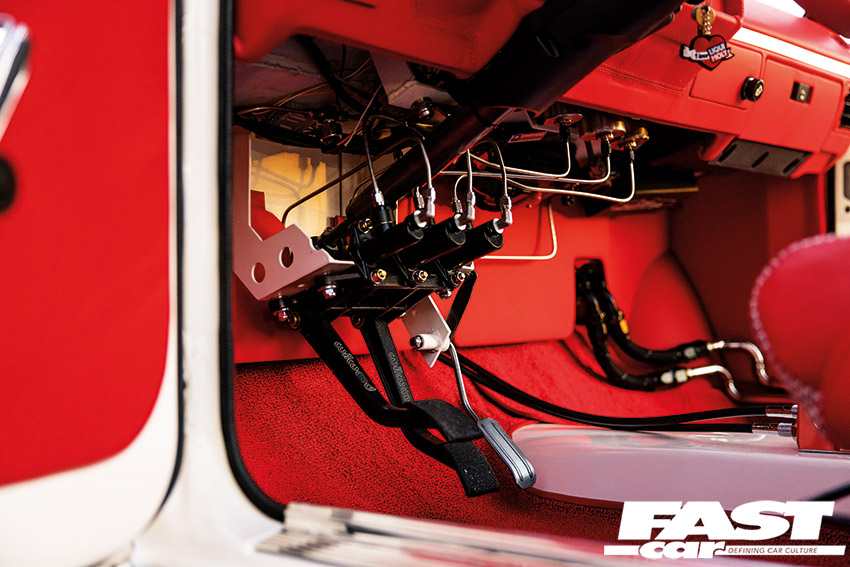 Moving onto the star car, this modified VW Rabbit Mk1 was originally purchased back in 2008. “This car started off as a clean shell from Oregon. I paid $600 for it and it cost more to ship it across the US as a roller than I purchased it for. That’s just how things go when you live in the middle of the snow-ridden rust belt”. Aaron was attracted to the 1978 GTI as he’d never owned an early Mk1 at this stage. A solid starting place but in a fetching shade of beige with brown wings and bonnet, the wheels were now in motion.

As with most truly successful builds, Aaron had a theme and stuck to it: “What would Singer do? became my North Star. I also wanted the Mk1 Rabbit to feature a level of bespoke metalwork more associated with American hot rods but executed in a factory-esque style so that people wouldn’t pick up on it unless they were Volkswagen nerds”. In a similar way to how Singer backdate 964 Porches to ape their seventies brethren for a retro aesthetic, Aaron is a fan of the iconic 1975 swallowtail models and thus utilized the bonnet, hatch, rear panels, swallowtail specific grille and light surround and glass to obtain the desired look. 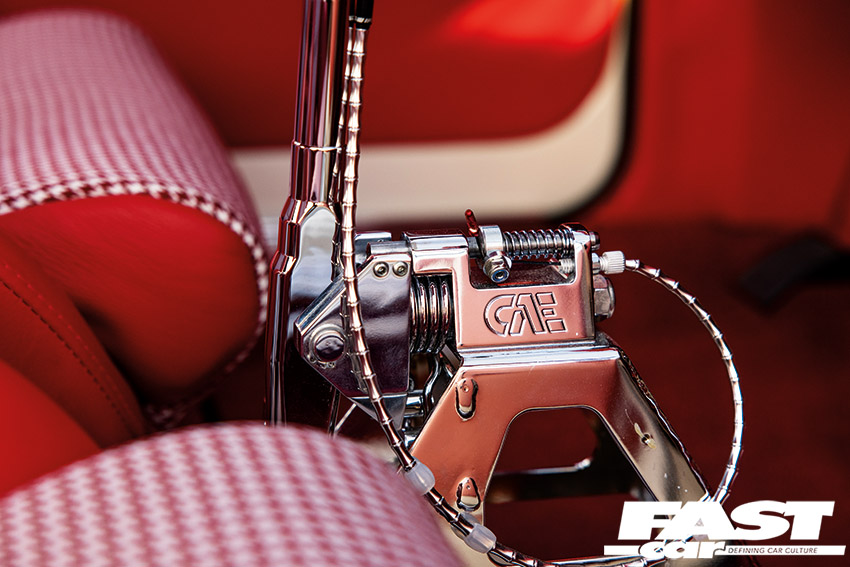 Despite the clear overall design brief and inspiration, there was a fair amount of deliberation and mind changing concerning power plants. A 1.8T was the original choice and then a ‘20/20’ package was seriously considered (2.0 litre 20V on throttle bodies). An Oettinger 16V was then offered by a friend and the exclusivity and quality of the rare tuning house item sealed the deal. The level of attention to detail is amazing and the underside of the car looks just as good as the top.

Despite the show car level of finish with everything either being chromed, powder coated or expertly covered in that gorgeous red leather or hounds tooth, this isn’t just a trailer queen. Aaron’s motorsport background is evident in such racecar orientated touches as spherical bearings in all of the pivot areas, tubular control arms, Wilwood brakes, drop spindles, dry sump, boot-mounted six-core oil tank and that gorgeous CAE shifter mated to the 02S six-speed transmission with 02A bell housing. 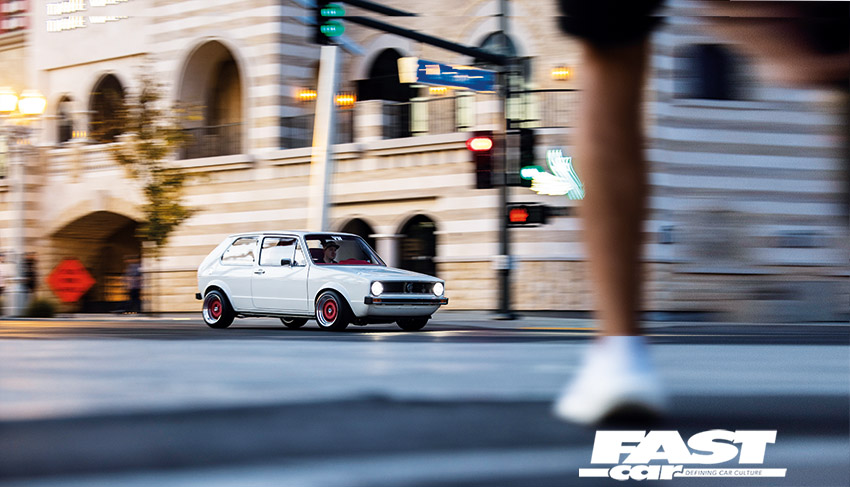 “It’s a racecar for the road and a show car. This is my dream build so I had no qualms with some of the spec that could be considered overkill”. It’s the overkill that makes this creation so breathtaking. We’ve not seen many cars where a new old stock fuel tank has been bodyworked, painted and then secured with leather straps to match the interior.

The Image split rims work brilliantly with their centers matched to the Flame red interior. Aaron explained that he got the perfect look for the wheels and then built the car around them. Weighing at a purposeful 15×9” at the rear with a zero ET and 15×8” up front with an ET of two, some serious re-engineering was required to get the car sitting right. The rear beam is narrowed 25mm on each side whilst the tubular front control arms are 13mm shorter than standard. An airlift 3P kit allows the rolling stock to tuck under the custom arches that have been pulled 13mm but retain the factory style bend. The Flame red works a treat in contrast to the purity of the flawless Porsche Biarritz White paint. 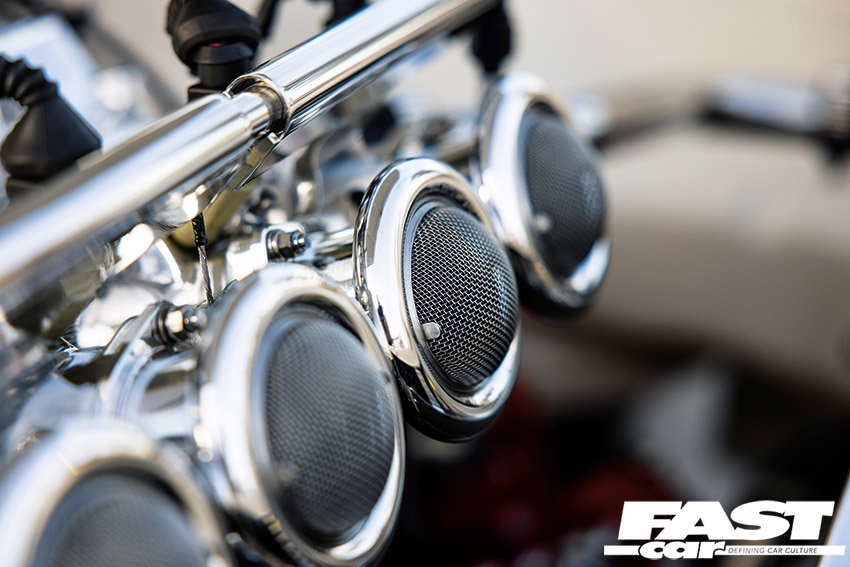 The interior is dominated by those stunning GTS Classics Vallelunga seats by classiccarseats.com. Aaron is thrilled by the quality and they are very similar to the seventies style winged bucket with headrest as favored by Singer. No less than 6 hides of Moore and Giles Flame red leather were used on the car. Top Stitch Auto lived up to its name covering the dash, bolsters, door cards and rear deck in quality cow. The houndstooth is brilliantly seventies and the custom white Speed Hut gauges complement that amazing body-colored exhaust tunnel.

Whilst the mix of custom touches and performance parts is impressive, it’s how they work alongside a dedicated haul of rare OEM parts that make this such a well thought out package. New Old Stock (NOS) chrome trim has been used throughout and NOS clear Happich pop-out rear quarters were installed as well as super-rare polished swallowtail aluminum door sills. Dapper Lighting LED headlamps in chrome swallowtail housings and rings and postal Golf rear light lenses with LED bulbs mix old school looks with modern efficiency.

2021 saw this modified VW Rabbit Mk1 break the internet when it took pride of place on the Wavetrac booth at SEMA and 2022 sees it get this scoop in Aaron’s favorite magazine. “To say this PVW feature has been a goal of mine is a bit of an understatement. All those years of dedication and it’s now coming true”. We’re pleased to be of assistance and look forward to you getting out and about and enjoying the fruits of your labor. This modified VW Rabbit Mk1 is the hot ticket. 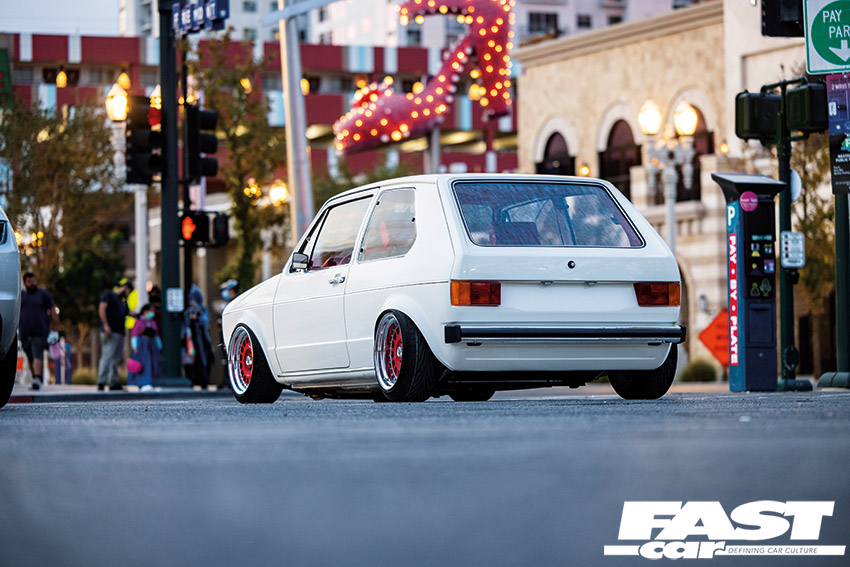