Kyle Bush has built this stunning modified VW Caddy and with a father who was a VW mechanic for 34 years, it was perhaps inevitable that he’d catch the bug.

This 28-year-old welder and fabricator hails from Jefferson, Ohio and has cars in his blood. “I have been interested in VWs since I was 16. VWs are special to me because my Dad was a VW/Mazda auto mechanic for 34 years at a local dealership. I didn’t know at the time that his occupation would have such a profound impact on me. When my toys broke, we fixed them to use again. At that time, I wasn’t aware that others threw items away because they lacked the skillset to mend them. Whilst in junior high school, my science teacher approached my parents telling us about the vocational welding program the school system offered. I wasn’t very good in school, but I excelled in my science course that year because it was very hands-on. The experiments were interesting and fun”.

Kyle was duly enrolled on the aforementioned welding course. He was a natural and was soon working on his own projects. At the tender age of 16, he bought his first VW, a 2001 Jetta. “I used three cars, in the end, to modify my MK4 Jetta into to a 2 door coupe. Then I converted it to right-hand drive and added air-ride”. How many guys of his age would have been skilled/brave enough to take that on? We’ve seen photos of the 2 door coupe and it looks great but, ever the perfectionist, Kyle is currently building a second one to showcase his skillset. He ensures us that this will be even better, drawing on the interim 12 years of experience in the fabrication world. However, that’s a PVW scoop for another day. 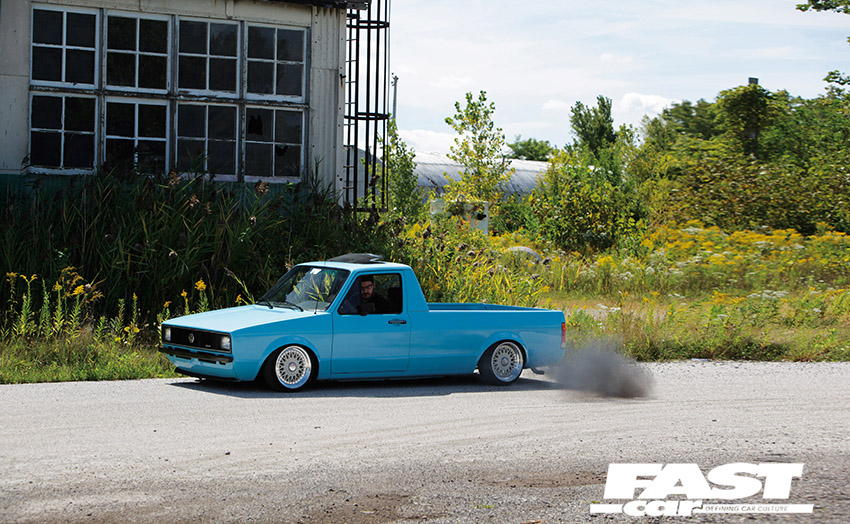 Other notable VWs that have been enjoyed by Kyle include a 2003 VW GTI and a 20th Anniversary GTI. Kyle dailies his 2011 VW Jetta Sport Wagon and a 1973 VW Thing ticks the air-cooled box. The Thing was saved from the woods it was found in and embellished with different pedals, copper door cards and copper engine tins to give it the rat-rod look.

Kyle’s father, David Bush had a good rapport with the other chaps at work and introduced his son to a great character, George Sineck. “George is an ex-Marine, very brash and funny. He also knows the value of things. As the early VWs began to show their age, he would strip them of all usable parts and store them in his barn which is known as the MK1 goldmine to some.  What is your admission to this stockpile of gold? A case of Genesee Cream Ale and a few minutes of your time to speak with him. Of course, you had to pay for the material you found, but the prices were well below the going rate”. 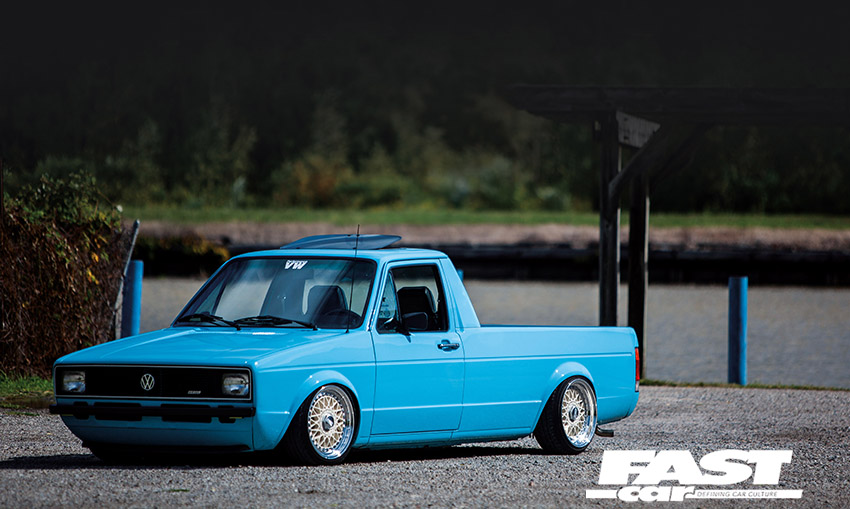 On one of Kyle’s many visits to collect parts for his Mk4 coupe, he saw a 1980 Rabbit Pickup Truck parked in the corner. The inevitable question was asked but George vowed to rebuild it one day. Kyle asked every time he visited as the years passed. His perseverance paid off though as eventually, George gave in. “One day he said “$3500 and it’s yours.” I had to ask him again, over and over just to be sure I wasn’t dreaming. I wasn’t! I began making payments and before you know it, I had paid the full amount and then asked about the missing parts. George said, “They are all here in the barn, so dig through what you need.” He then said it would be cool if I converted this gas engine to a diesel. Then he dropped the bomb that the engine from my dad’s 1977 MK1 Rabbit was being used to heat the greenhouse. He said, “It’s been running for six to nine months straight at a time for two years but since it’s your dad’s rebuild, it’s just getting warmed up.” George knew that David’s engines were put together meticulously and, hence, would often re-purpose them if he was breaking one of his old cars.

The 1500 diesel engine was collected and joined the Caddy. Kyle and his father rebuilt the powerplant again to ensure longevity and reliability. “Now it has over half a million driven miles on it plus the two years of idle while it was repurposed as a greenhouse generator!”. It was a real part of family history when David’s old engine was fitted into his son’s truck. The ’77 Rabbit Donor vehicle was Miami Blue hence the choice of colour for the modified VW Caddy. A nod to the past and a great choice on any Mk1. 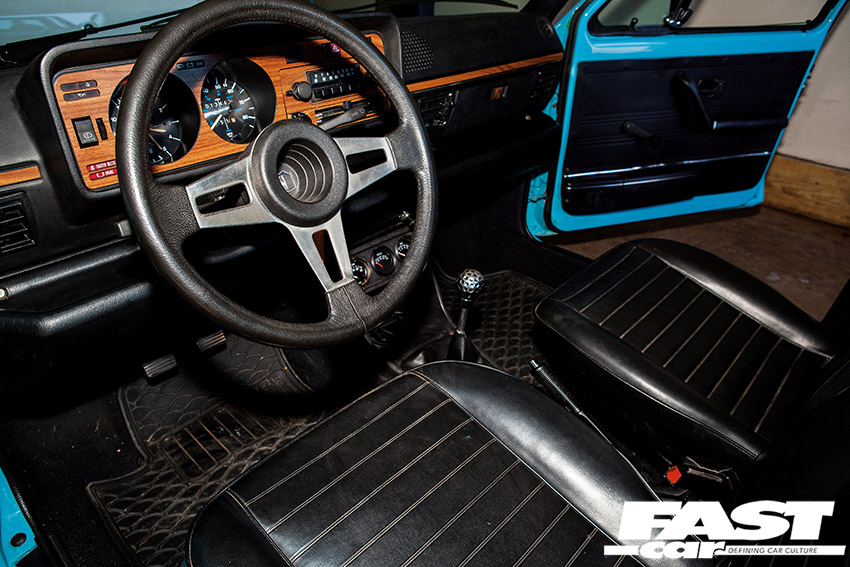 The truck was completely stripped down to a shell. It was a roller, but not much more than that. Kyle was keen to get the one-owner vehicle back on the road and hit the meets and shows. The hunt for parts and materials was completed. Kyle then set about the metalwork, shaving the ‘bay, and fitting the sunroof before installing the interior and air-ride.

The rebuilt engine was fitted and those gorgeous powder coated BBS RMs were offered up and tuck perfectly. The bed was cut to neatly house the battery and air set-up. “I decided to shave the marker lights to go along with my theme of the shaved engine bay. I did all this work myself and it took me about a year to complete all the metalwork. I added the sunroof because when I got the truck something must have fallen on the roof while it was in the barn and it was not worth the time to try and fix so the sunroof was a perfect option. My favourite modification is the shaved engine bay. That took a while to engineer how to route lines, cables, etc so that they were unseen. I installed the CKW2 air-ride system to this truck as the roads in Ohio are junk. It rides nicely and the stance is perfect”. 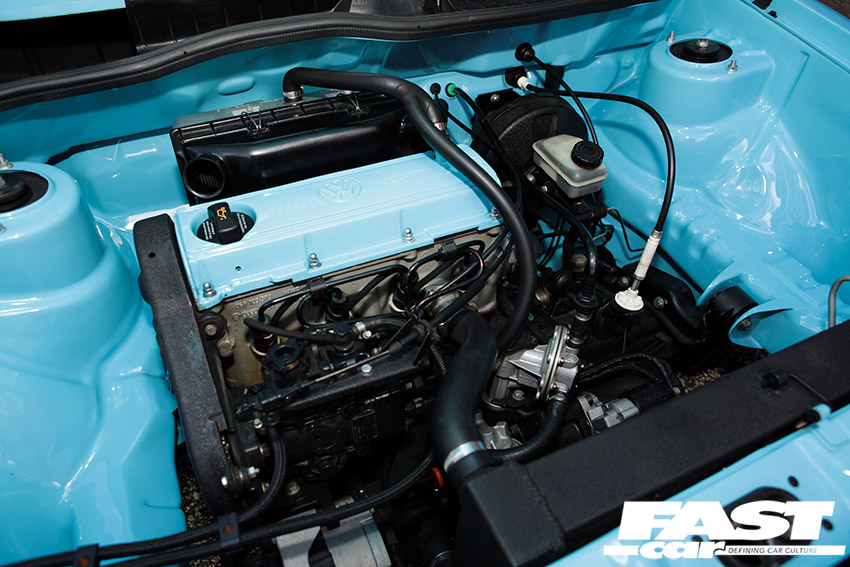 There are no modifications to the 1.5L diesel engine on the modified VW Caddy except for the Corrado G60 valve cover which joins the Miami Blue party. The lump runs like a Swiss watch thanks to the fastidious rebuild but the 45 horsepower is not best suited to all scenarios. Kyle laughed as he told us about his friends having to get out of the truck on a steep ascent up Cabin Mountain Hill in Helen, Georgia for the Alpine VAG Fair 2018 show.

The stock interior suits the retro aesthetic of the modified VW Caddy. Sourcing a good condition Scirocco steering wheel was a long headache for Kyle but it’s a subtle touch that provides the OEM icing on the cake. Replacement window and door seals were hard to find and expensive but on a build this clean, the smaller details count. 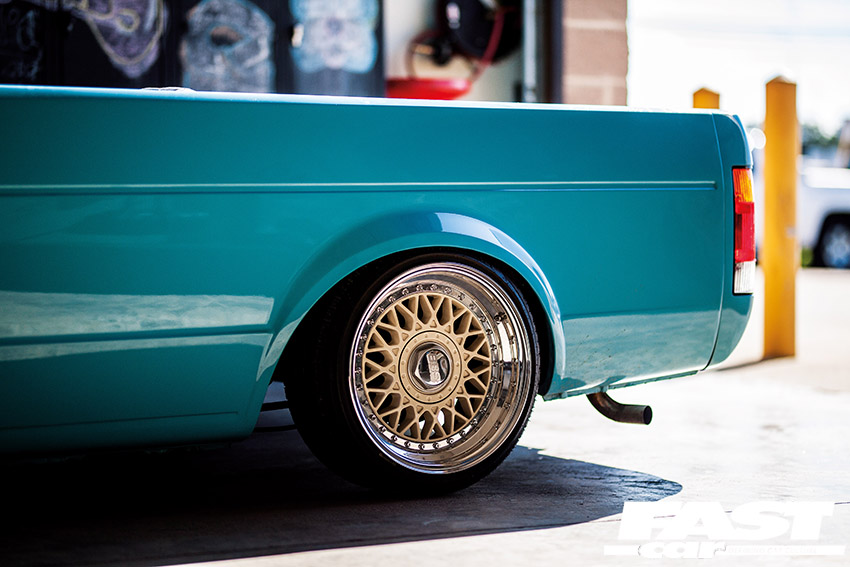 Kyle bought the Mk1 VW Caddy in 2013 and it took him four and a half years to complete. With the sentimental value attached to the build, this one is a keeper and it will one day be passed to his daughter, Cora. Like all good modified cars, they’re never truly finished and Kyle teased us with the news that he is adding custom split rims that will utilise Mk1 Golf ‘snowflake’ centres. We’ll leave the final wise words to the man of the moment: “I have so many people to thank for helping me achieve my dream. Too many to list, but they know who they are. I am so proud of this truck, its heritage, and my dad for teaching me that just because something is old, does not mean it’s not extremely valuable”. 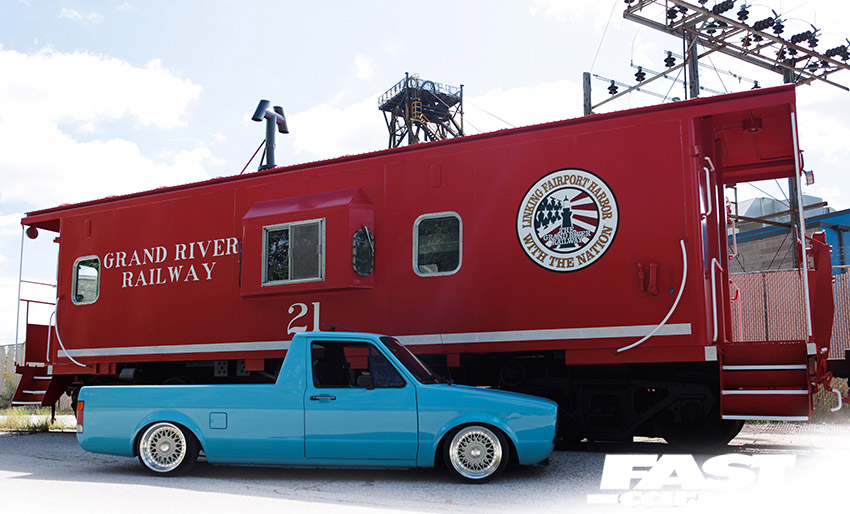 Thanks to my Dad, David Bush, for his thorough knowledge of VW motors and cars, George Sincek for selling this truck to me, Greg Zorn for the CKW2 air-ride system, Larry Rippin from First Time Automotive for the exterior bodywork and paint