Better known as Mr RS500 for his work with Ford’s Group A-special Sierras, Paul Linfoot gets his weekend kicks from a devilish 800bhp modified Shelby Mustang nicknamed Satan. But this is no ordinary Mustang, as we’re about to discover…

When your working week involves spannering on genuine ex-Group A Sierra RS500 Cosworth touring cars and restoring the finest road-going examples of Ford’s iconic homologation special, whatever car you jump into at the weekend is always going to leave you a little underwhelmed.

Unless, of course, that car just happens to be a raucous supercharged V8-powered, modified Mustang tickled by the legends at Shelby to produce a ludicrous 800bhp and enough toque to jump start a planet. And that’s exactly what you’ll find parked up next to all the Sierras inside Paul Linfoot’s garage. 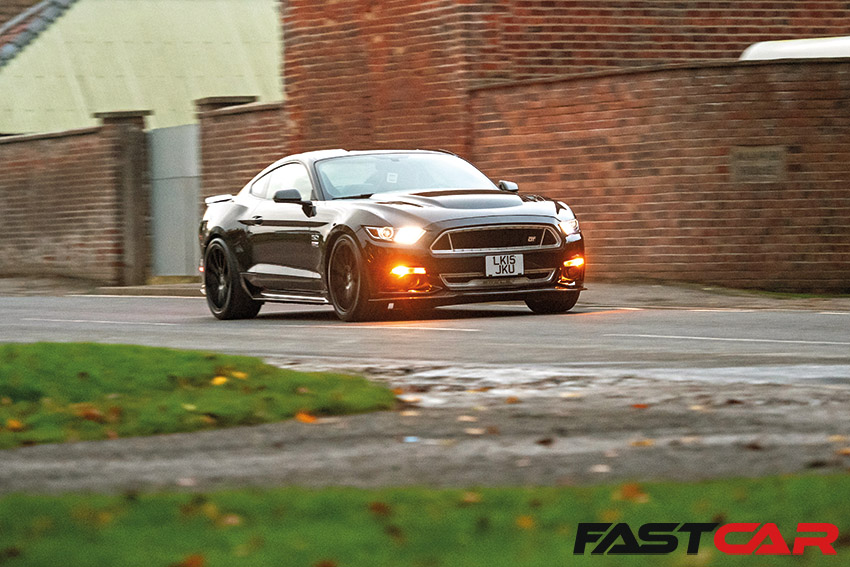 But why does a man who has spent the last 30-odd years messing around with Cosworths want an American muscle car?

“I don’t really know. I guess it started when I sold my Moonstone ’500. I never used it, and I fancied something different,” shrugs Paul.

When you think about, the two cars really aren’t that dissimilar; both are Ford icons with bags of heritage, both are front-engined with rear-wheel drive, and both are easily tuned to double the stock factory power levels. 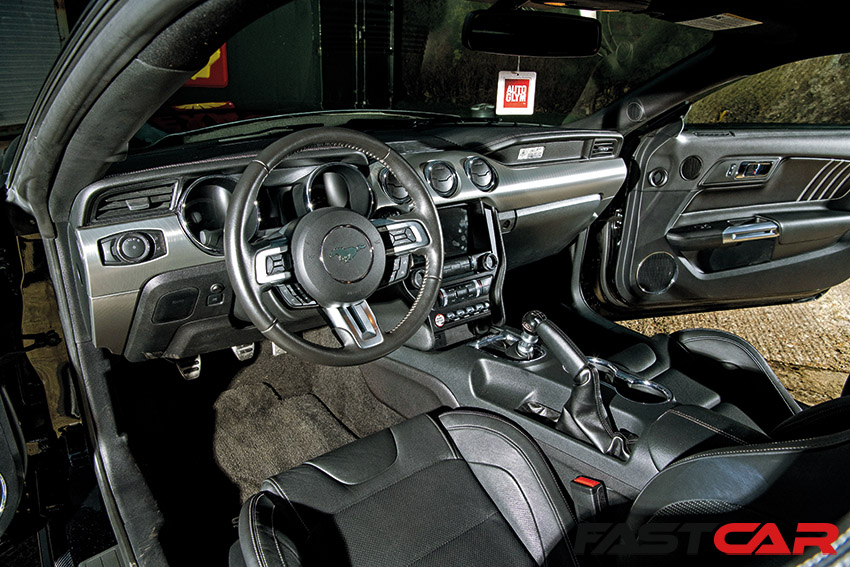 And, perhaps most importantly of all, both are huge amounts of fun, and give the sense of excitement mixed with a little bit of terror that petrolheads crave.

But Paul is not a man who is easily pleased. Not only would any potential purchase need to be meticulously kept, but Paul also had a specific criteria that would need to be met before he’d even entertain looking at one. 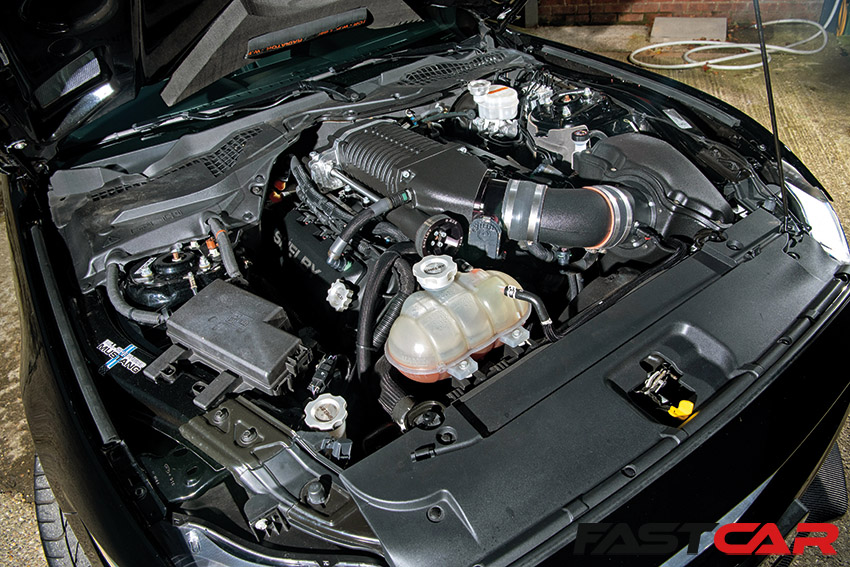 “It would need to be a V8, that goes without saying, but it would have to be supercharged too. Also, I’m quite fussy on colours, and I’d only consider black or white cars; maybe silver at a push,” explains Paul.

“I put a post on Facebook asking if anyone knew of any suitable cars for sale. Of course, no one reads anything in detail, so I spent the next few days sifting through wads of yellow convertibles, red EcoBoosts, and various other examples I had no interest in.” 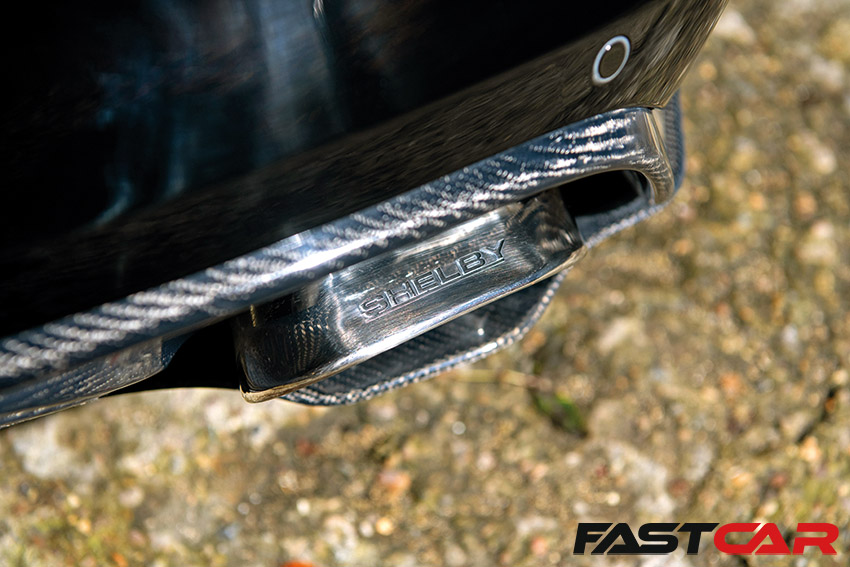 A deal was very nearly done on a black Clive Sutton CS800-spec car, but before the final handshake, Paul asked to see the car’s service history and the seller revealed that it didn’t have any.

“That was a deal-breaker right there,” sighs Paul. “I’d be all right, but I’d never be able to sell it on without any service history.”

So, back to the internet search and wading through another batch of totally unsuitable suggestions from Facebook helpers. But perseverance is king, and it wasn’t long before Paul’s patience was rewarded with another car to consider. And this one ticked all the boxes. 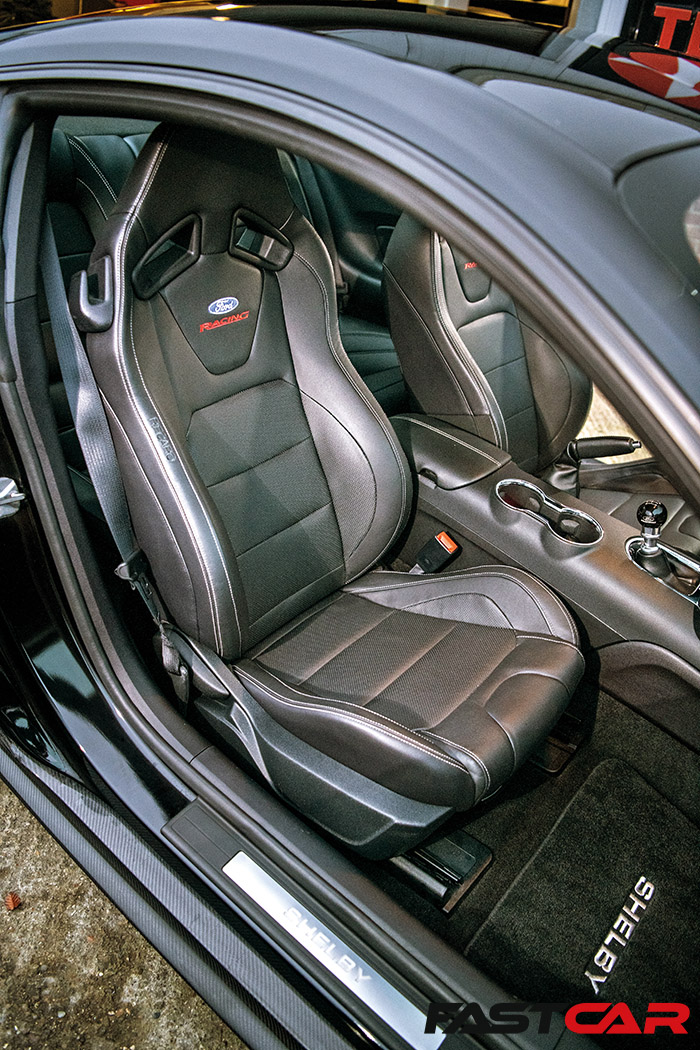 Paul says, “Adam Bowler found a Shelby GT at a prestige car dealer in Kent. My first impressions were that I loved every bit of the car, other than the fact it was left-hand drive.

“But then I started to do some digging, and the more I found out, the more interesting things became.”

Paul discovered the car was a genuine Shelby built by Bill Shepherd Mustang (BSM) in the UK. BSM was the only officially licensed Shelby distributor in the whole of Europe – not only able to transform your Mustang into a fully-fledged Shelby but also supply it with an official Shelby VIN and even an entry into the Shelby American World Registry. Sadly, that side of the business has since closed. 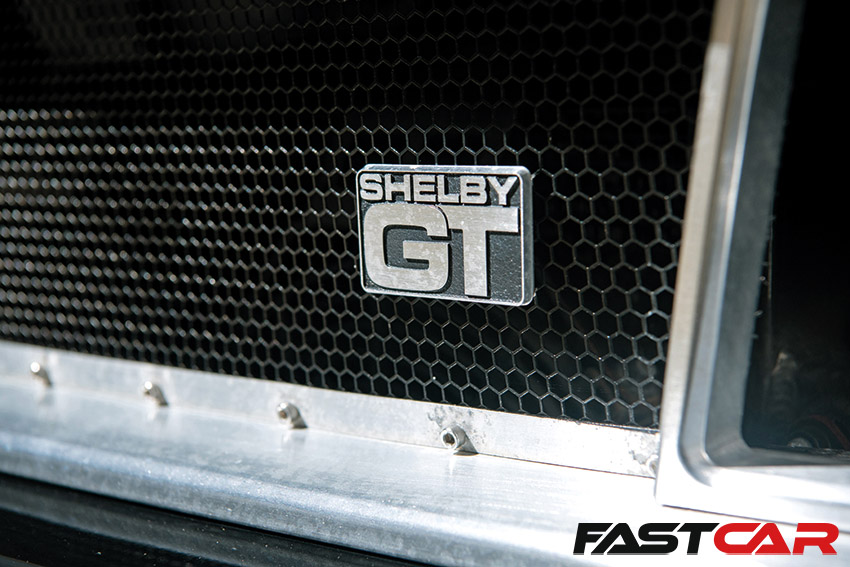 Paul says, “That means that nearly all genuine Shelby Mustangs (bar a handful that BSM built based on later UK-spec right-hand-drive cars) are left-hand drive.”

Plus, at the time this car was built, the right-hand-drive version didn’t exist; we didn’t get to see that until Ford MD Andy Barrett unveiled the first RHD car at a Mustang meet at Dunton in September 2015. Incidentally, this car was on show at that meet too.

Further investigation showed this particular car was built in June 2015 and was the first S550 model that BSM converted to Shelby GT-specification; it was duly given the nickname Satan thanks to its devilish power and sadistic all-black styling. 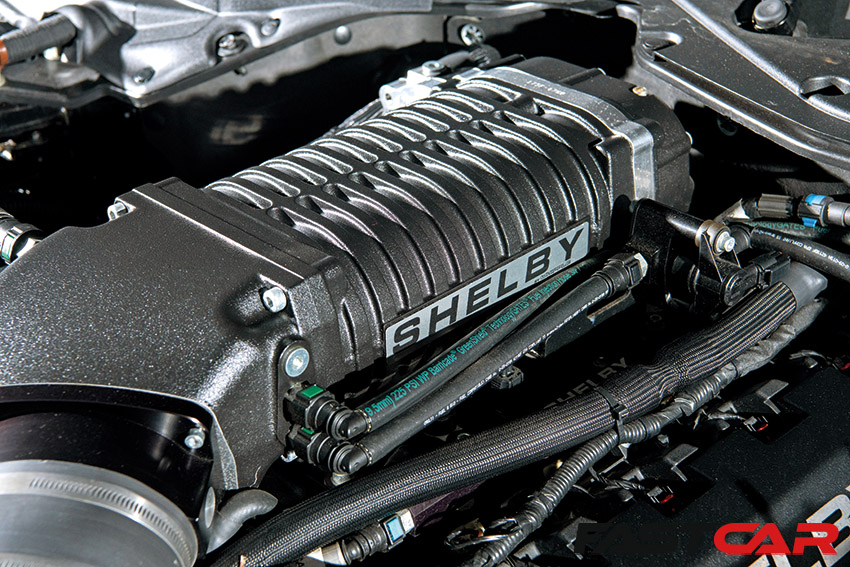 A mass of upgrade parts had landed safely direct from Shelby in the USA, and the Shelby GT was born ready to be shown to the public at Goodwood Festival of Speed a few weeks later. That makes this the first ever Shelby Mustang to be built outside of America, and because BSM was so quick to get the car to market, it was reported at the time to be the first ever commercially-available production S550 Shelby GT anywhere in the world.

“It just got better and better. The more I discovered, the more I wanted the car,” smiles Paul. More digging unearthed further power upgrades had been added since it was built in 2015. Back then, it was fitted with a Ford Performance supercharger and produced around 670bhp. But when Shelby launched the Super Snake upgrade a short while after, the first owner asked BSM to fit the same 3.2-litre Whipple setup. 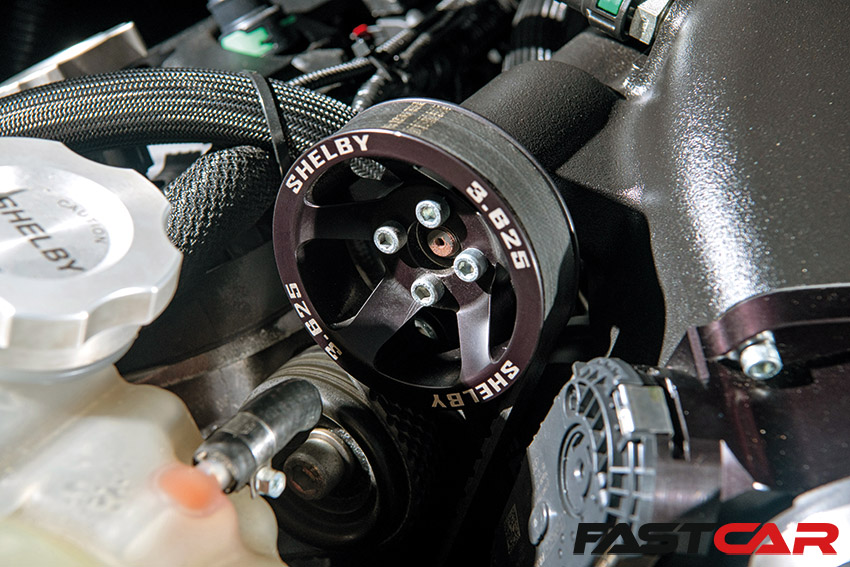 This increases the power to over 800bhp and means a blistering 0-to-60mph time of just 3.5 seconds.

“It feels it too. The rear end squats, the nose lifts, and it just clears off,” grins Paul.

You’ve no doubt guessed by now that Paul very quickly decided this modified Shelby Mustang was the car for him, and when he learnt that a sister car (the second Shelby GT built by BSM, also left-hand drive) was up for sale at nearly twice the price, he wasted no time in answering the advert. 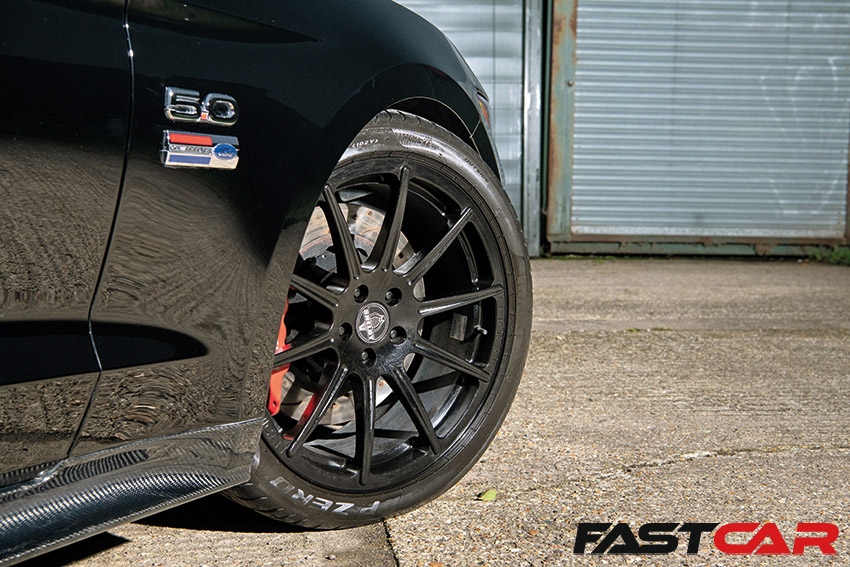 “In all my years of buying cars this was the first time that I’ve paid the full asking price and not even attempted to barter,” laughs Paul. “It goes against every one of my tight-northerner and car-dealer principles, but I couldn’t give the seller my credit card details fast enough to secure the deposit.”

Paul then had to wait a couple of weeks before the car was delivered.

“As it backed out of the trailer I just thought ‘wow’. The carbon fibre parts didn’t really show up in the photos, but they just popped in the sunlight,” recalls Paul. “And then there was the noise. It sounds fantastic, like nothing else I’ve ever driven.” 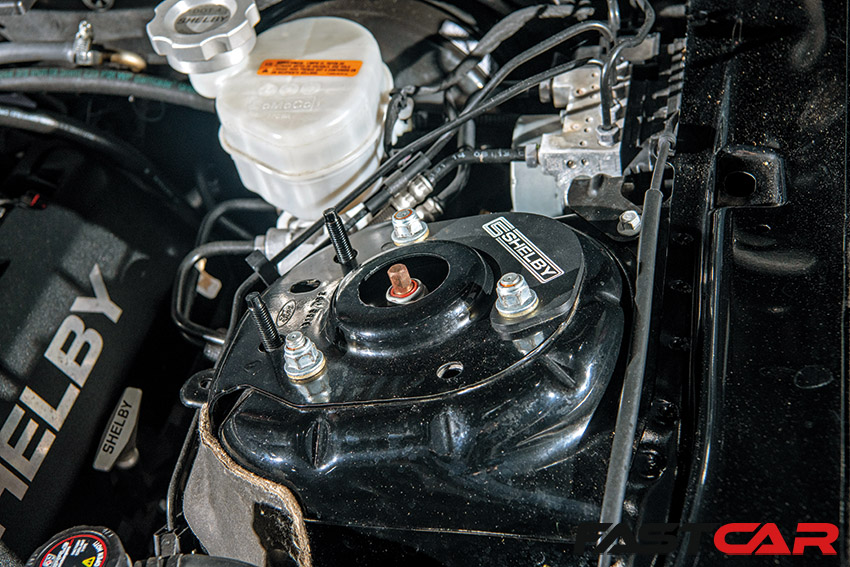 He may have had it for only a few months, and an 800bhp supercharged left-hooker is never going to be the ideal daily driver in rural North Yorkshire, but Paul has been out enjoying his modified Shelby Mustang as much he can.

“I just love it. There is honestly nothing I don’t like on it,” proclaims Paul. And anyone who has ever seen any of Paul’s work or knows of the incredibly high standards he sets himself when working on RS500s will testify, that is very high praise indeed. 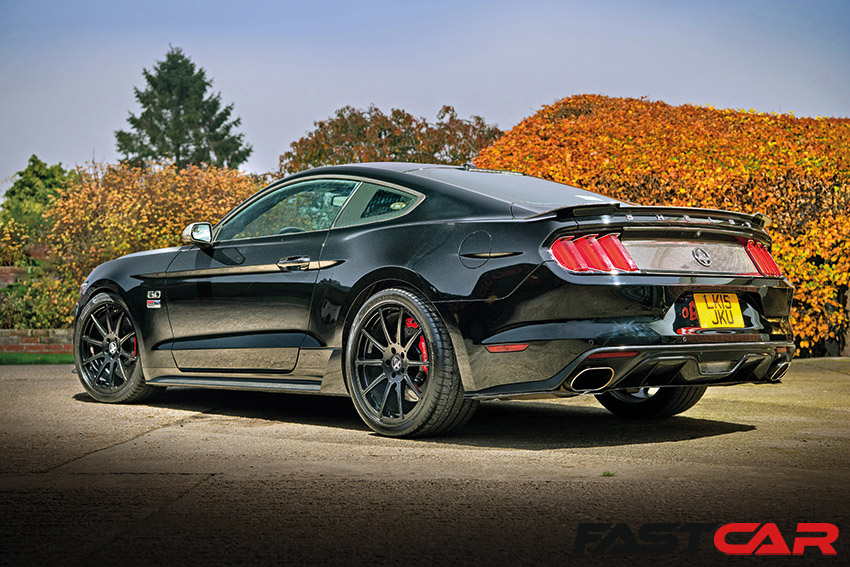 So are we witnessing the seeds of change being sown for Paul? Once he’s restored the few remaining Sierra RS500s and they’re all safely living in climate-controlled storage houses, will he don the Stetson and cowboy boots, crank up the country-and-western, and start fettling with another famous fast Ford icon? Who knows. Paul seems smitten with Satan, his modified Shelby Mustang, and you know what they say about dancing with the devil…