Modern tuning shenanigans is one thing, and there’s no doubt we all love a slice when fitting a modern engine to an old school car. Clever stuff is always good, but forget your fancy sequential gearboxes and all-singing, all-dancing standalone ECUs for a moment, and cast your mind back to a simpler time. We’re talking about when the big names in Japanese tuning dominated the modifying world. Uprated parts and components were plentiful, effective and a little less technology-focused in their approach.

Of course, modern gear has since moved on significantly and there are brands from all over the world now offering newly developed, fanciful products that are easily available. But there’s always something nostalgic about seeing a heavily tuned car from the bygone era – all the more when it comes to a cultural heavyweight, like this modified Nissan Skyline GT-R R33.

Finished in rare Le Mans Blue, this one has a specification that reads like a check list of those famous Japanese tuning firms. It features parts from the likes of HKS, GReddy, JUN, Trust, Tomei, Apexi and OS Giken, and harks back to a wonderful time when those names were at the very forefront of design and innovation. The Goliaths that were created back then were true beasts, raw and hardcore in their nature, and they had a reputation to suit. They were often brutally fast, but equally as brutal to drive and not exactly what you would call user friendly, especially when it came to driving on roads, rather than drag strips and racetracks. 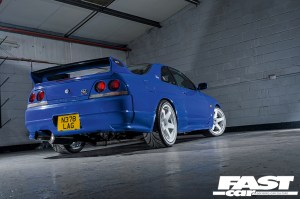 With that in mind, the first time I saw this car, a member of staff from The GTR Shop (the Skyline specialist in Durham) was battling to manoeuvre it across the car park of their premises. That might sound like a simple enough task, but this was back in February. There was snow, ice and sleet on the ground and the car was parked at the bottom of a small slope. Hearing it burble into life and a heavy ‘clunk’, as a gear was engaged, I could immediately tell this was a serious machine, an old school bruiser with a mechanical rawness to it.

It took plenty of revs for the triple-plate clutch to bite, and when it did, all four wheels immediately span together as the differentials aggressively locked and the tyres scrabbled for grip on the slippery surface. This, in-turn, caused the car to dart sharply in the general direction that the front wheels were pointing, but not in a particularly confidence-inspiring motion. I couldn’t help but raise a smile as I watched it slowly scrabble up the slope, the driver wrestling the car as the engine snarled and the wheels mercilessly span in unison, sending it jolting around the car park.

It was clearly a bit of beast, but despite the technical specification straight out of a credit-happy Gran Turismo game, this up-and-coming modern classic was largely built to this bonkers state of tune here in the UK. It was then bought by The GTR Shop and soon given a once over and a partial rebuild of some key components. 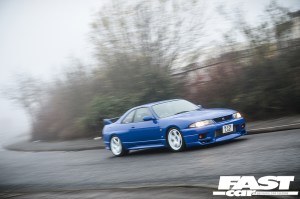 At the heart of the build is a hugely modified RB26, based upon a stronger N1 block. Internally, it features an HKS Step III conversion, complete with a 77.7mm billet steel crankshaft, which is reportedly good for 1500bhp or so. The oversized HKS step design pistons and rods offer a larger capacity and, to keep it lubricated, there’s a JUN high-flow oil pump along with a Trust high capacity baffled sump. The cylinder head is an extensively modified item too. Rebuilt by Abbey Motorsport and fitted with 272-degree, 10.1mm lift camshafts of unknown origin, along with adjustable Tomei pulleys. It’s sealed to the block using an HKS 2.0mm steel head gasket and a matching HKS ‘drag spec’ head bolt set. So, yes, it’s quite involved.

Providing the boost is a rare set up, as most big power Skyline tuners tend to convert to a single, large turbo. Here, the twin set up remains, but the turbos are much larger: T67-25G items from GReddy. They are mounted on modified GReddy top mount manifolds, so are nice and prominent with the bonnet open. The turbos are regulated with a pair of huge HKS 50mm external wastegates, complete with individual screamer pipes. The boost is sent via custom pipework to a huge HKS 150mm ‘drag spec’ intercooler mounted up front, before being sent on to a GReddy inlet plenum to feed the head. The fuelling side of things it taken care of by a GReddy 11mm fuel rail that supply huge 1000cc HKS ‘drag spec’, top fed injectors. A pair of Tomei 270-litre fuel pumps, located inside the fuel tank, keep these happy whilst everything is controlled by an HKS F-Con ECU and a Turbosmart E boost 2 controller. 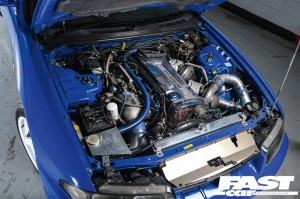 Anyway, with that kind of firepower under the bonnet, the original five-speed gearbox, clutch and differentials were never going to cope, so they‘ve all been suitably replaced and upgraded. It’s actually the hardcore transmission and drivetrain that really make this car a bit of a monster, as witnessed in that snowy car park. First of all, there’s an OS Giken triple-plate clutch which transfers the power to the gearbox, which is an HKS six-speed, straight-cut dog box item. From there, power is sent to the wheels via a matching OS Giken LSD at the rear. There was a second OS Giken LSD at the front, but this has now been replaced by a more usable Quaife LSD to improve the road manners… a bit.

To match the thoroughly overhauled and improved engine and drivetrain, the R33 has also been treated to a set of Kawasaki coilovers, which are up to the job of keeping the car firmly on the road. Similarly, in the name of control, the brakes have also been uprated to KSport six-pot callipers with huge 365mm discs at the front, whilst the original Brembo items reside at the rear. 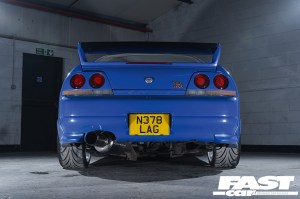 Inside, there’s an array of 60mm Apexi gauges located on top of the dash, along with the Turbosmart boost controller and AEM wide band display. Otherwise, the interior has been left surprisingly standard, considering the hardcore nature of the mechanicals underneath. A similar plan of attack can be found on the outside, as the rare Le Mans blue colour was a limited edition, so exterior styling has been left relatively standard. The larger 18-inch Rota wheels are the only addition, fitted to aid brake clearance and allow a wider tyre to help improve grip, which is the job of the 265/35×18 Federal RSR semi-slick tyres.

So, what does that little lot equate to in terms of power and performance? Well, as Asim from The GTR Shop explains, it’s so far produced some pretty bloody impressive figures. “The previous keeper power ran the car and it made 630bhp at the wheels, on just 1.4Bar of boost, with plenty of scope for more,“ he tells us. “The engine is designed for much more and was mapped to 1.8Bar of boost, so more power is available for the insane! We estimate that, with another 0.4Bar of boost, perhaps around 850bhp at the flywheel is possible.“ 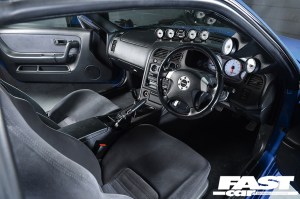 However, as mentioned already, this car is not exactly what you would call the perfect daily driver, thanks largely to the power delivery and transmission, and some of the aforementioned changes by The GTR Shop were to help that. “The car itself needs to be handled with care, as you can well imagine,“ Asim tells us. “The HKS six-speed gearbox needs precise shifting and the engine, by design, isn’t built for low down response. The replacement Quaife front diff does an admirable job, however, the triple-plate clutch is actually quite easy to use.”

This method of tuning is becoming rare. Many cars that are starting to gain classic status are being updated with user-friendly components for more ‘modern’, easy-to-drive performance.  But, to us, that seems a shame… although they probably deal with snow and ice a little better!

Fancy creating your own modified Nissan Skyline GT-R R33? Then have a read of our dedicated buying and tuning guides. Or to get up to speed with the Skyline story, take a look at our definitive guide to every generation.