Think you know how an modified Nissan Silvia S14a should be built? Yeah, Jay Pescaglini isn’t listening to ‘should’…

Much like a well-played game of cards, the recipe for success in pretty much any walk of life is to subvert normality and confound expectation. To harness a timeworn cliché, when the world zigs you must zag. There’s nothing to be gained from following the herd and blending into the background. You only live once.

Jay Pescaglini is a man who’d probably hand your backside to you over a deck of cards, be it poker, Chase the Ace, or Crazy Eights. (Probably. We haven’t played cards with him, we were too busy pointing at his Nissan and swooning.) When the cosmos tells him what to do, he merely laughs indulgently and does something entirely different. That’s just the way his particular game is played. So when the thought occurred to him to build a fresh modified Nissan Silvia S14a, he didn’t immediately start mapping out some manner of drift build. Oh, no. That would be too obvious. Stance was the answer, and he knew just how to execute his plan. 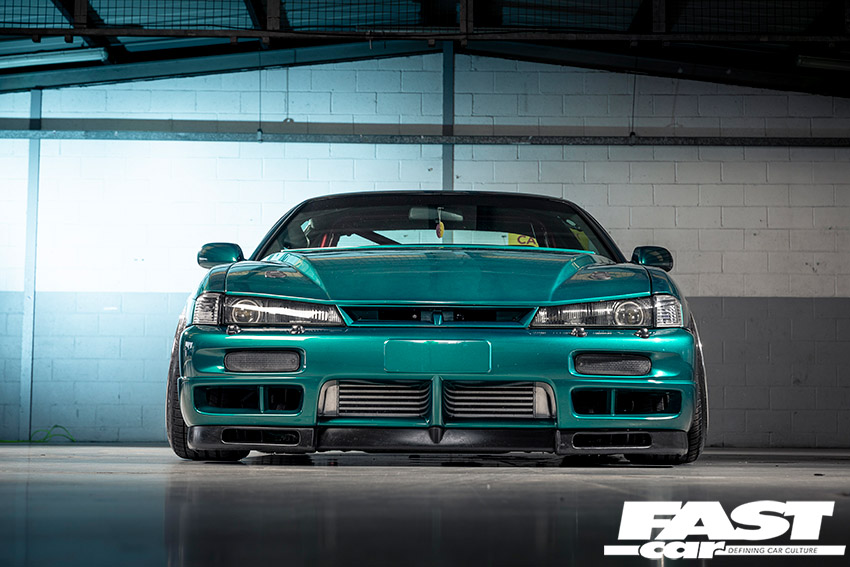 To fully understand the essence of the modified Nissan Silvia S14a, and why Jay’s concept was so radical to aficionados of the model, you need to teleport your subconscious back to the Shuto Expressway between Tokyo and Yokohama, way back through the swirling mists of time in the early 1980s. A shadowy group of outlaws, going by the name Mid Night Club, hosted illegal high-speed races along the Bayshore Route section of the Shuto, a 40-mile stretch of motorway that takes in bridges and tunnels and, crucially, allows plenty of space and straight runs for eye-watering speeds. One requirement of entry was a car capable of over 160mph (190mph+ races were not uncommon), and the police – whose cars were limited to 110mph – were powerless to act.

The club was officially founded as a race team in 1982, and became notorious for its shadowy shenanigans right up until it was disbanded in 1999, although the hardcore of members kept the spirit of Mid Night Club alive, and the gang’s mystique has resonated through the ages. 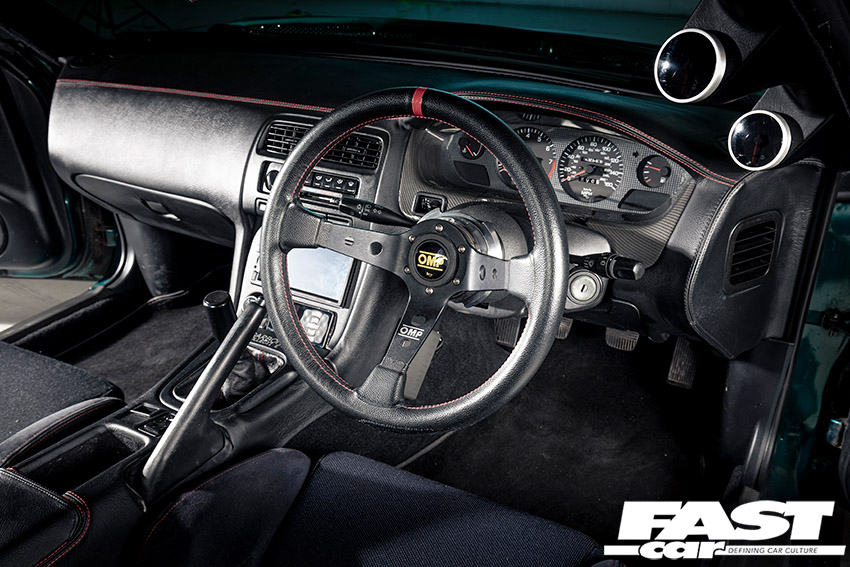 Also disbanded in 1999 was the S14-generation Nissan Silvia, making way for the new-millennium S15, so it’s only appropriate that the car we see here, a flawlessly presented S14a, should carry the Mid Night Club torch well into the 21st-century. We can’t speak for its ability to break 160mph (hey it’s worth a try…), but it’s every inch the nineties Wangan street hero, transplanted into modern Britain with clinical efficiency, an up-and-at-’em attitude, and a modern stance twist.

Jay had clearly absorbed something of the Japanese street-racing subculture ethos in his formative years, and his diverse motoring adventures helped him blend his disparate influences into something unique. “Coming from a family of car lovers, it was in my blood to get into this,” he explains. “My first car was a 1996 Corsa SRi which I modified over two years; it was 2004 so right in the middle of the Max Power trend. The car ended up sporting a Flycatcher bodykit, 18” wheels, and all the Ripspeed tat I could get my hands on! I then went on to build two Corsa GSis, one of which had a 300hp C20LET – that was a handful. After a few other small French and German projects I ended up purchasing my dream car in 2011, a Mitsubishi Evo VIII FQ-340 MR. This was an ultimate moment for me and my car modding run, and really kick-started my love for Japanese cars.” 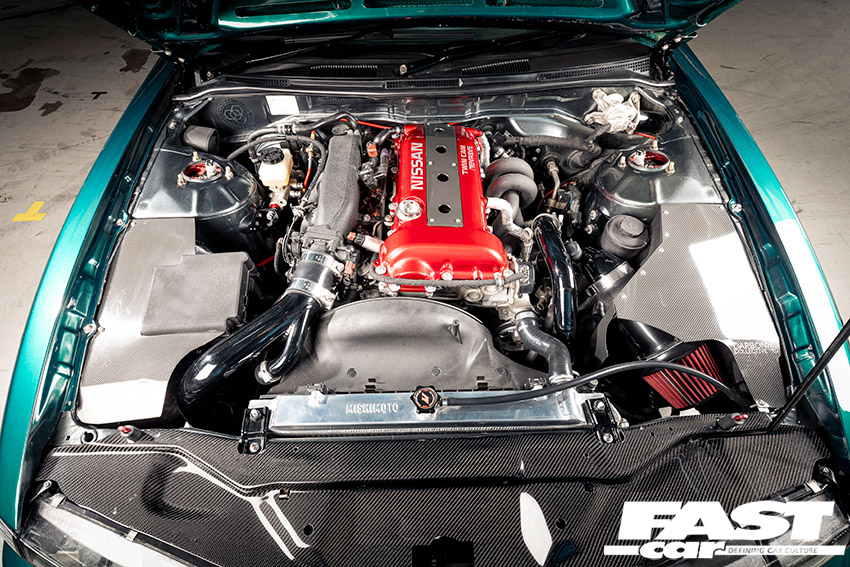 So, having achieved the pinnacle and acquired his dream car, why go after an S14a?“A number of reasons, really,” he muses. “They were super cheap to buy (back then anyway!), and easy to modify with a huge aftermarket. Plus they look absolutely incredible, with so much potential.”

This was back in 2014, and the Nissan was found in Carluke in Scotland. Jay drove up there with a bunch of mates, having been won over by the condition and the spec: it was in decent order throughout and had a bunch of desirable S-body mods already in place. The previous owner had installed some tasty tuning upgrades like an S15 turbo, Nismo injectors and standalone engine management, and it also had some neat chassis changes including fast-road coilovers, a half-cage and bucket seats – so that was a lot of boxes ticked right from the off. But, of course, this was never going to be a case of simply buying up someone else’s project and rolling as-is. That’s not how Jay plays the game. 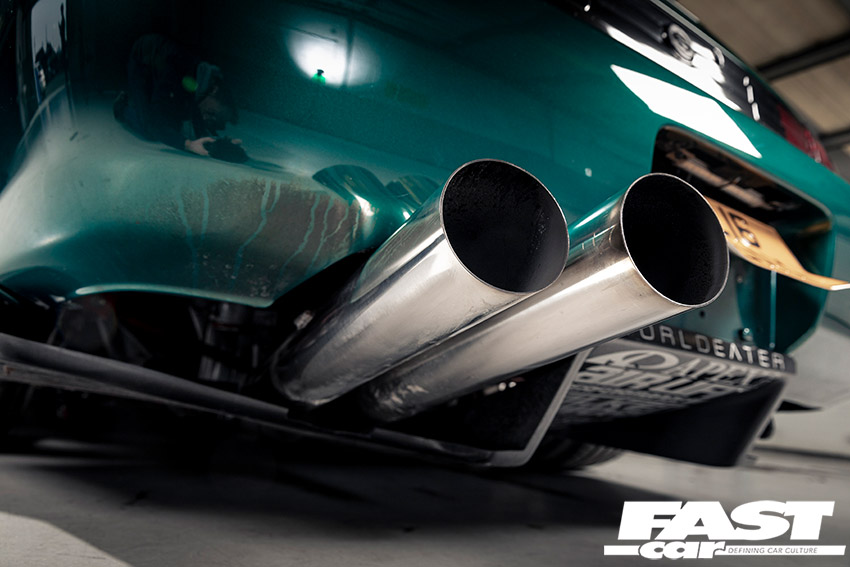 “I’ve been building the car for eight-and-a-half years now, and it still gives me the biggest grin when I use it,” he beams. “I pride myself in doing 99% of the work myself in my garage at home – with the exception of paintwork and tyre-fitting – and it’s fair to say there’s no bolt unturned. The car has been wide-bodied (twice!), resprayed, and lots of custom bodywork bits added. I had WORK Wheels build me the Meister S1 to my specs, and they made a huge difference. I’ve retrimmed and specced up the interior to modernise its appearance, the engine has been pulled, and every nut, bolt and bracket replaced or upgraded. The car is running Air Lift 3P suspension with fully adjustable alignment arms all round, which is probably overkill for a stance car… And the most challenging part of the build by far was the underside and engine bay chassis restoration. It took a total of twelve months on-and-off to get it straight and future-proofed. After around 120+ man-hours of welding alone, the car is now completely rot free!”

The upshot of all this is a car that’s more show queen than drift king, but that’s precisely what Jay built it for. And haters gon’ hate, but he’s entirely unapologetic about upsetting an element of the S-body faithful. His car his rules, after all. “I generally use it for indoor shows nowadays, or the occasional trip out to Caffeine & Machine,” he says. “It looks great but, as a car, it’s not the thing to drive on the roads! And I’m very pleased by how people react to the build; people particularly compliment the fitment and stance. It gets the occasional butt-hurt comment from people thinking it should be a drift car, but that just adds to the fun for me…” 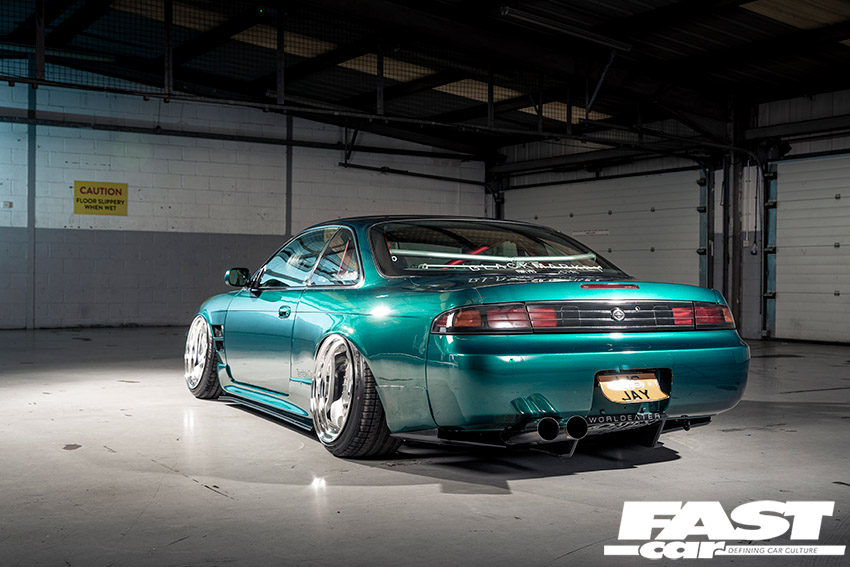 Which, naturally, is just the way it should be. When the scene zigs, Jay zags. You won’t catch him standing still, there are always new methods to try and new avenues to explore (“I’m far from finished with it, I’d really like to get the car resprayed again with some bodywork tweaks”), and we get the feeling eight-and-a-half years is just the starting point. It may not be haring down the Shuto Expressway at 190mph, but nevertheless the Mid Night Club spirit is strong with this one.

Thanks to my best mate Sean for his relentless help and advice, the car wouldn’t be where it is without his input. My wife for being so incredibly patient and supportive during the whole build process. And Jacko for devoting every weekend to welding it during winter 2017.