The Nissan 200SX has always been an important model in Rich Nelson’s life. And when he sold his first one and immediately regretted it, he certainly wasn’t going to make that mistake again. The incredible modified Nissan S14 track car you see here is how he exorcised that demon…

We’re so used to seeing a modified Nissan S14 built into a drift car that it can come as a surprise to find one that’s set up for grip rather than slip. And when it comes to track-focused S14s, we defy you to find a more comprehensively specced and aggressively built example than this one. You see, for Rich Nelson, this was always destined to be a serious track project, the massive #TrackAddict graphics emblazoned upon the car speak volumes for his circuit obsession, and the 200SX in particular has always played a major part in his automotive passions.

“Like all petrolheads, I’ve been into cars since I was a kid,” Rich explains. “I was always getting in the way of my dad working on his cars! He never believed in paying a garage to do something you can do yourself, so I learnt from a young age working on his cars. Everything car-related is his fault from there on in! As soon as I could drive I started modifying, I’ve modified every car I’ve owned – even the BMW X5 4.6is had coilovers wound to the ground. And before I got my licence, back in 1999, my dad bought a Nissan 200SX S14A, three years old – it was beautiful, and you never saw them back then.” 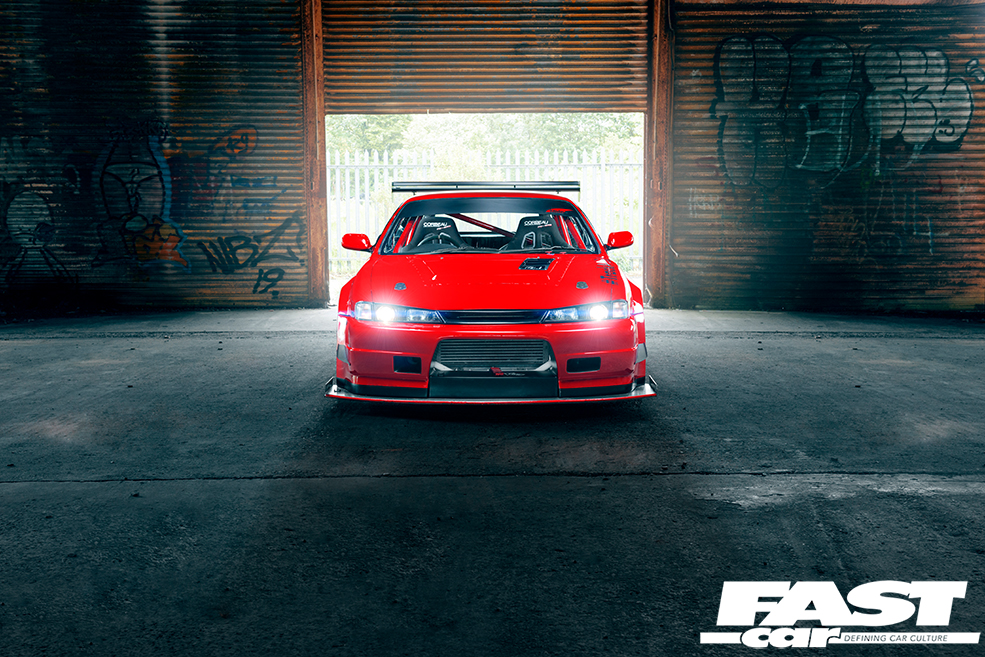 It was this car which planted the seed (his dad still owns it too, he won’t let it go), and Rich was adamant that he’d own one himself one day. Insurance costs made it a no-go at the time, so he spent a few years modifying Novas and Corsas before hitting 19 years of age and being able to buy his first 200SX. “I loved that car, and over the following years I spent a fortune on it,” he recalls. “Then one day I decided a new car was in order, an E46 M3, so the Nissan went. And instant regret kicked in.”

After a couple of years of regretting the decision, the yearning grew too strong to bear and Rich found himself on the blower to his mate Matt at Slide Motorsport to see if he knew of any appropriate project bases; a short road-trip later and the lads were collecting an S14 shell for the princely sum of one crate of beer, the seller in question simply wanting it out of the way. 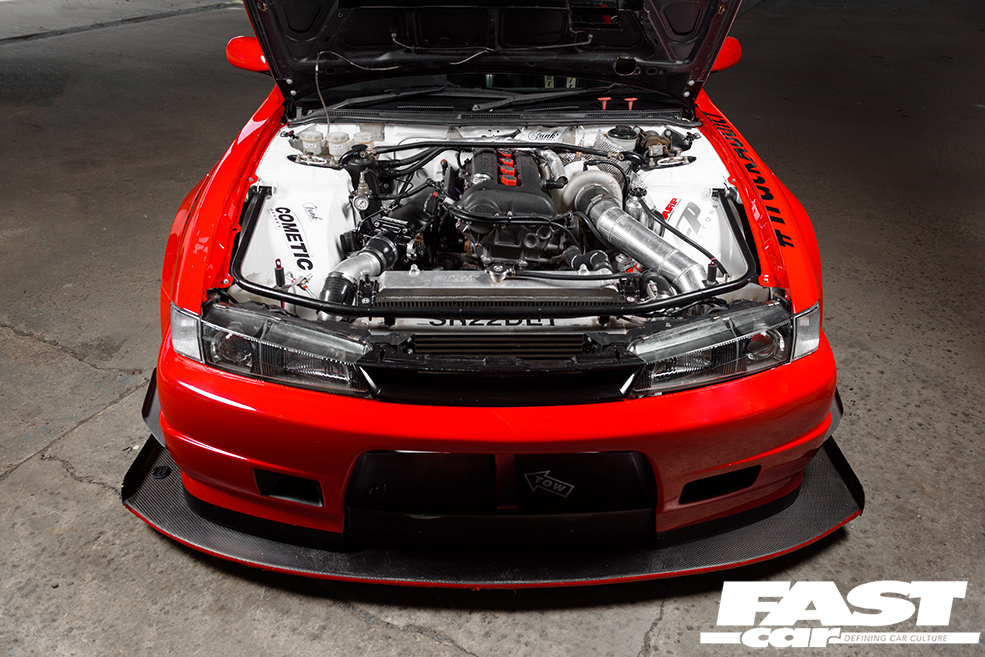 Right from the off, Rich had a plan for the car – although it’s fair to say he didn’t envisage things going quite as far as they have. With a deep-seated enthusiasm for track life, he wanted to build a Time Attack racer, and if you’re going to do such a thing it makes sense to start with a car that’s been torn down to its base elements. Of course, a bare shell in factory-stock form is only the starting point when you’ve had an idea like this…

“Before anything could be fitted, every ounce of excess weight had to be removed,” he says. “This was easy as the car was stripped, so it was just bags and bags of sound deadening that was pulled out! The underside was stripped, treated, and undersealed before anything was going anywhere near it, to keep it fresh and clean. 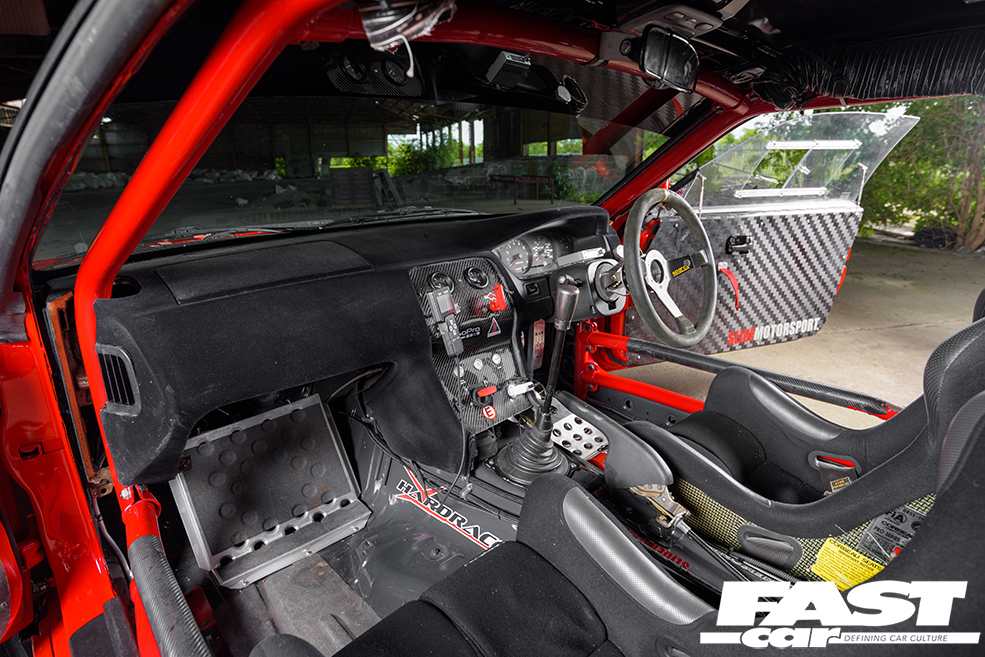 A trip back down to see Matt and raid the Slide Motorsport stock shelves yielded all the parts I needed to get me going; subframes, steering rack, hubs, wiring looms… everything had to be found, as there was nothing at all in the shell. The subframes were stripped, strengthened and powder-coated, and it was the same with the hubs and steering rack. New bolts, and new polybushes or solid bushes were ordered for the entire car, as well as new bearings. Everything was ordered up.”

It’s an almighty shopping list, but thankfully the sizeable wallet-bashing was offset somewhat by the fact that it was, at least, not a horrendously difficult task. This is because Rich’s wife, Louise, is the manager of Apex Performance in Bradford, so everything required was simply a phone call and a one-day delivery window away. And given that Apex is the main dealer for some extremely desirable aftermarket brands, some of the parts decisions were absolute no-brainers: BC Racing and K-Sport are on the books, so Rich chose himself some tasty BC coilovers and frankly massive K-Sport brakes for either end – 8-pots and 356mm discs up front, 6-pots with 330mm out back. 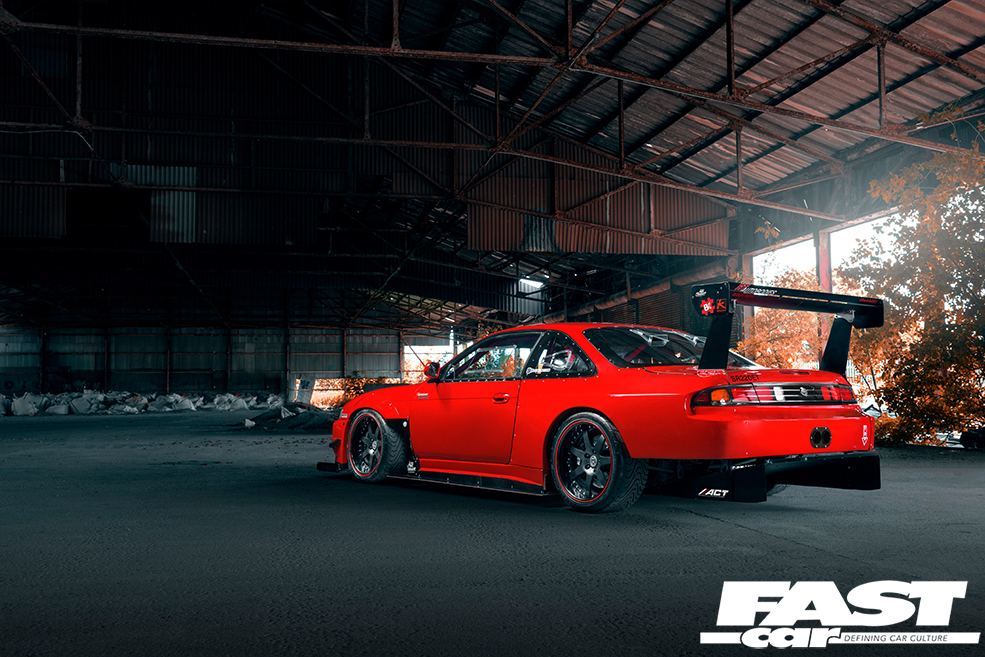 By this stage, the track monster was really starting to come together. “The 8-pots were fitted up to the fresh-looking chassis, with all new custom braided lines and AN fittings,” he continues. “Piped through from the OBP Motorsport pedal box, they look hard as nails. The 6-pot rears run from the dedicated rear cylinder on the pedal box, giving me front-to-rear adjustable bias on track. Working with the Pagid RST3 pads, these things make your face part with your skull when you stamp on the pedal! The BC Racing coilovers were fitted with uprated springs to take the abuse from the extra aero that was planned, and Hardrace suspension arms were installed. All the rear arms were extended to give the extra width needed to fill the massive RT Autobodies rear quarters without the need for any spacers or mega-spec wheels.”

That’s right, this holistic build was always destined to have some in-your-face bodywork and extreme aero, and it’s at this stage of the tale that RT Autobodies enters the frame. This is a company run by Rich’s buddy, also named Rich, who used to run a pretty extreme S14.5 track monster with a custom home-made kit; given that he still had the moulds, and there was no off-the-shelf kit on the market that would fit the bill for this project, he was gently persuaded to make up just one more set. Therefore even the most fervent S-Chassis fans probably won’t be able to pinpoint the provenance of the wide arches, front and rear bumpers, bootlid, bonnet vents and carbon-Kevlar doors – it’s all custom-made for this car. 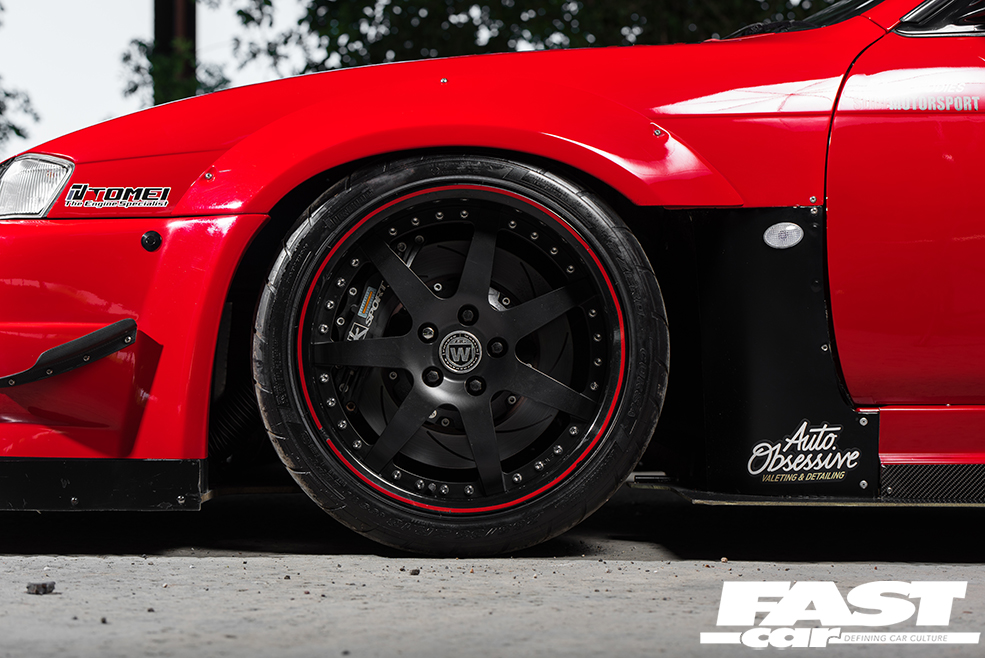 “A massive 60kg was saved just by the two doors,” Rich grins. “The carbon fibre front splitter was also created to finish things up – RT Autobodies’ craftsmanship and attention to detail is amazing, so I had no worries in how everything was going to come back, and I wasn’t disappointed. Everything was a straight fit. Then it came to the colour: initially it was satin grey, to be stealthy, but it turned out to be too subtle – if ‘subtle’ is at all possible with this car! It needed to stand out more, so while I set to building the engine, Rich changed the colour to Misano Red. And I just love it, it suits the car perfectly. Plus red is the fastest colour, everyone knows that.”

With the engine build being next on the list, Rich was keen to create something sufficiently spectacular to match the level of focus and attention to performance that had been lavished on the chassis and aero. Sticking with the SR20DET, he had it running in a very healthy state of tune, kicking out around 370bhp which made it pretty handy on track, until one day Louise threw him an amusing curveball: “One random afternoon, my wife called and asked if I’d like a 2.2 stroker kit for Christmas or a V8 conversion package,” he laughs. “I like turbo, so the stroker seemed like it would be pretty cool – and two hours later I had all the makings of an SR22DET on my floor. It seemed a shame to hang about, so the engine got pulled apart straight away and the build began.” 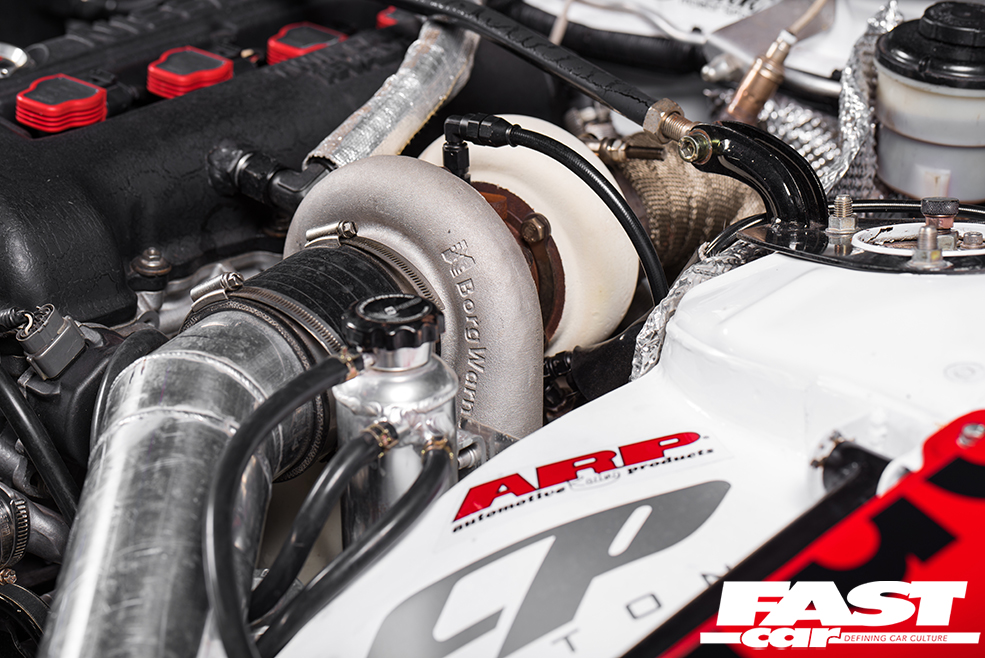 The spec of the motor really is remarkable, with the block housing 87mm CP pistons, Crower rods, and ACL main and rod race bearings. ARP studs hold it all together, and the top end sports Tomei cams, BC valves, springs and retainers, and the fuelling system is appropriately meaty: Injector Dynamics 1,050cc top-feed injectors and an Otaku Garage intake plenum with top-feed fuel rail, a Walbro 255 in-tank lift pump feeding an OBP 2-litre swirl pot, and a Bosch 044 external pump feeding the fuel rail. Everything in the system is running custom braided lines with AN fittings, it’s all overseen by an A’PEXi Power FC, and the jewel in the crown is the BorgWarner SX257-E top-mount turbo sitting on an APW stainless manifold.

“Once built, the car took a trip to APT in Norwich, to visit Gary and start the tuning,” says Rich. “With the BorgWarner whistling away, and the wastegate keeping boost under control at 1.8-bar, the result was 502bhp and 450lb.ft. To be completely honest I was a little disappointed at first, but then I realised that I had over 500bhp in a car that’s stripped and massively lightened, and this was surely going to be nuts. And it is! It certainly does not disappoint. The results of brakes, suspension, aero, weight-saving and engine build has created one ballistic track animal.” 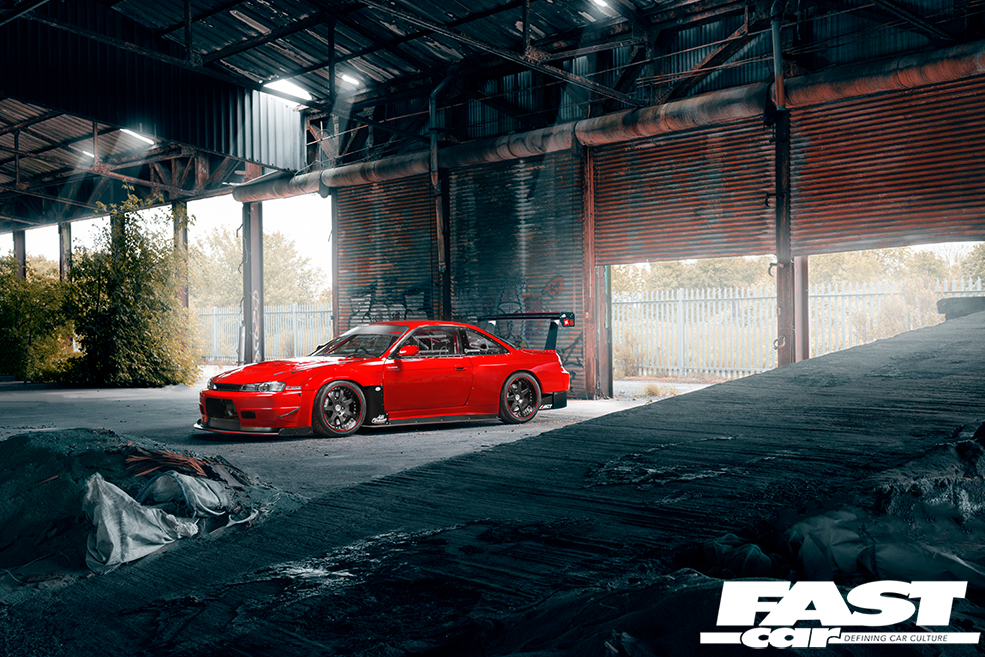 Perhaps the best part of all is, despite being built specifically for hardcore track use without a single iota of compromise, the modified Nissan S14 remains road legal. And there are few sights more arresting than a full-on race car trundling down the high street. It sure gets a lot of double-takes. “The looks of appreciation and confusion are something else,” Rich grins. “And pain, as the splitter decides to pick up on anything that’s not smooth tarmac. On the track is where it really belongs though, driven hard, having fun, and stretching its legs ready for a shot in Time Attack.” All being well, this astonishing build should be hitting the track competitively in 2020, neatly fulfilling the ambition that Rich had held for the car from the start. The 200SX has always been placed highly in his affections, right back to his very roots. Today he’s built what is unquestionably one of the coolest and most impressively-specced S14s in the country, and we’re really looking forward to seeing what the opposition make of it. 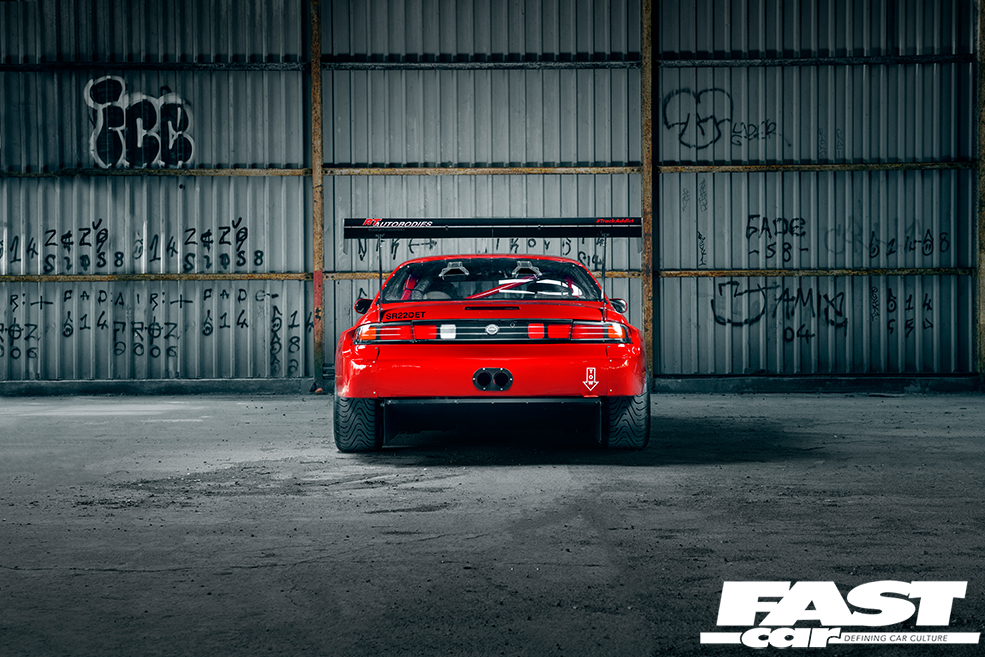