Autrey McVicker at BMP Tuning has assembled the most modified Mk8 Golf GTI to date and arguably the most powerful, too, but it wasn’t easy…

Anybody who’s tried to modify a brand new car will know how incredibly frustrating it can be – parts suppliers are still developing new products while you’re chomping at the bit to get it lowered and louder. And while the Mk8 Golf GTI is essentially an updated Mk7, VW changed just enough to keep everybody guessing. Fortunately, Autrey McVicker at BMP Tuning in Dallas has done all the leg work and we offer his guide to building a pukka Mk8.

Before he could get started, Autrey needed a car. BMP is renowned for its MQB conversions and he wanted to be first out of the gates when the Mk8 Golf arrived on US soil to maintain his pioneering reputation. He dutifully placed a deposit at a local dealer but they changed the delivery date twice, leaving him at the back of the queue. 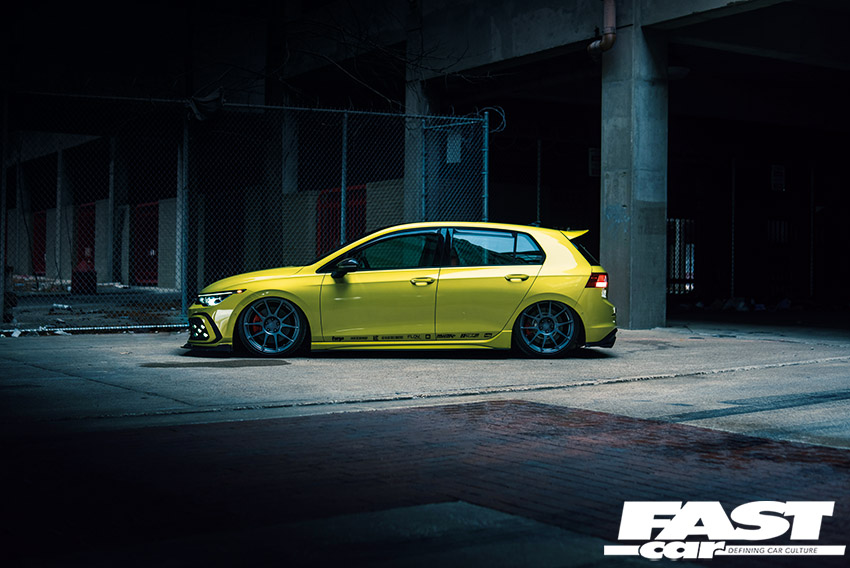 As cars started hitting other dealers last December, Autrey hurled deposits in every direction, hoping one would stick. He finally got a dealer to respond but they attempted to gouge him an additional four grand for “dealer add-ons.” He then placed deposits on a further two cars, eventually winning the lottery with a launch edition Golf GTI Autobahn package in Pomelo yellow at a dealer in Fort Worth. Buying the car that day, the serious work could begin the moment he got the car home.

Immediately the wheels stopped turning in the BMP workshop, the car was on the lift and an air gun was on its wheel nuts. With MQB parts flying, the BMP crew set to work seeing what Mk7 Golf components they had in stock and what would fit. As it transpires, there’s more carry over than perhaps VW would care to admit. To date, the only Mk8-specific parts fitted include the turbo silencer delete, intercooler hoses, exhaust system, downpipe and, of course, the exterior pieces. 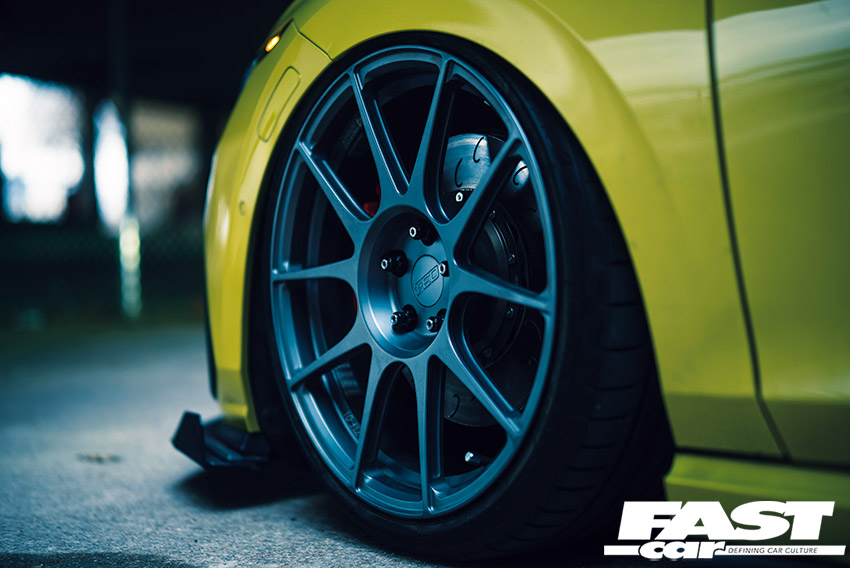 What’s been particularly encouraging for Autrey is the industry support he received for the project. “It’s been one of the greatest experiences of my life,” he told us. “I’ve built SEMA cars before but I’ve never had so many manufacturers wanting to work with us. It was great to see their enthusiasm for the project and it made a huge difference. I’m confident we have [at the time of writing] the most heavily modified Mk8 in North America, and the highest dyno figures.”

Autrey built a few cars before deciding to quit his job in 2011. He lived on a boat and worked on cars before briefly moving to Houston and back to Dallas. Partnering with Ryan Blair, who ran a local bodyshop, the pair formed BMP Tuning in 2017 and found themselves focusing on the VW MQB platform. This was primarily because Autrey’s first VW was a 2015 Mk7 GTI – he walked into the light, rejecting his past indiscretions and going full Euro. He’s been building VAG cars ever since and wanted to leave his mark on the new Mk8 Golf.

“I do this because it’s fun,” Autrey explained, in reference to BMP. “I started it to build cars and it has allowed me to continue having fun.” Referring to the Mk8, he continued, “This is what I’d build if I had a Mk8 but not the workshop… I’d do it regardless, and it makes me really grateful I got into the VW scene. The community is great and it’s where I’m staying!” With credentials established, we can continue with the GTI. 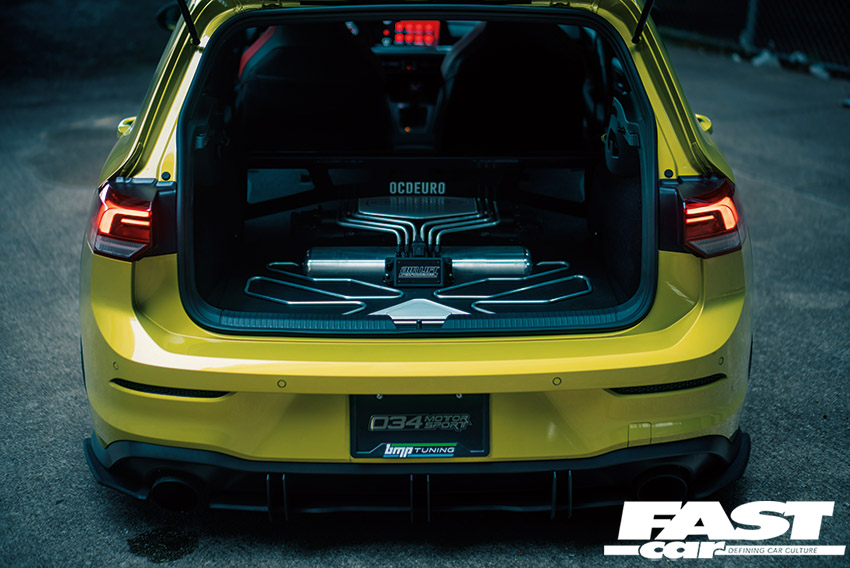 Despite it’s relatively short gestation, the car has been through a number of iterations. If you follow BMP online, you will have noticed it first featured 19” Rotiform DTM wheels. These were borrowed from a Mk3 ‘giveaway’ project to verify fitment. And as it turns out, the offset is the same as most GTIs.

Similarly, the modified Mk8 Golf GTI has seen a number of suspension upgrades. It began with a set of APR coilovers, which were kicking around and again confirmed Mk7 parts would fit. Autrey subsequently worked with MSS Suspension to test and launch the company’s new conversion. It transpired that, in the US at least, approximately 80% of Mk8 Golf GTI and R models have VW’s Dynamic Chassis Control. The MSS kit allows owners to keep DCC but lower the car on new spring perches and get better spring rates for performance use.

More recently, Autrey switched to Air Lift, possibly to attract the attention of the world’s greatest VW tuning magazine… Utilizing 3P management and 24” FLO tank, Autrey was working with Kustomz Unlimited in Dallas on a custom boot installation just days before these photos were taken. Given the time crunch, the display is somewhat minimal, but they plan to eventually install a half-cage, subwoofers, amps, and the whole nine yards.

With moves afoot to extract more performance from the Golf GTI through tuning, Autrey obtained two-piece brake discs from 034Motorsports. They were 340mm (13.4”) diameter up front, which is the same as his standard Mk8 Golf rotors and equates to the size of the larger Mk7 GTI S spec (meaning the Mk8 Golf appears to have larger standard discs than the Mk7).

For the rear, 034 offers 350mm (13.8”) discs, which are substantially bigger than the 210mm standard parts. They were supplied with brackets to reposition the calipers.

Fitted in concert with oddly sized 9.3×19” 034 ZTF-01 forged wheels, Autrey claims he shed about 20kg from the front of the car, further aiding the performance improvements. 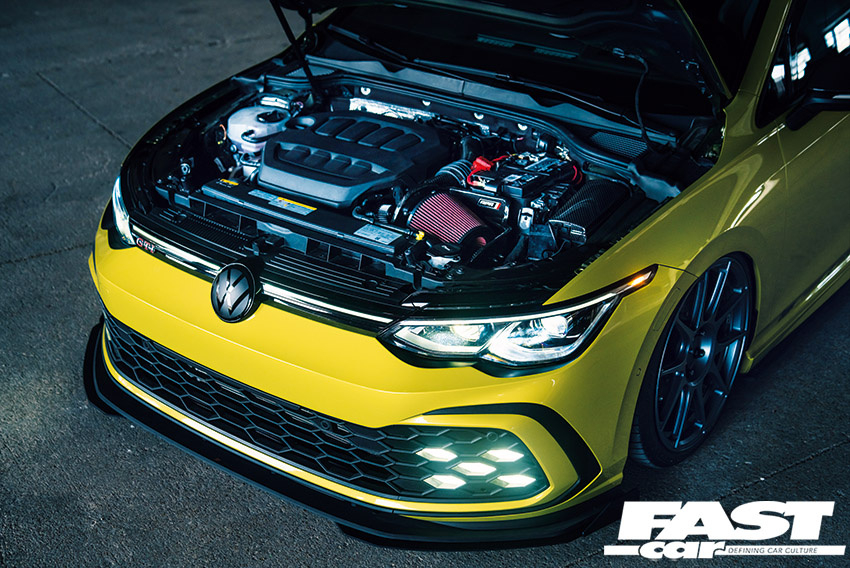 Boasting 240hp and 270 lb/ft, the 1984cc AE888 Evo4 engine delivers decent power, although significantly short of the R’s 315hp. The deficit clearly indicates there’s more to come, and Autrey uncorked the 2.0T with a JB4 piggyback ECU from Burger Motorsports since nobody has successfully decoded the factory black box at this time.

To aid its breathing, the modified Mk8 Golf GTI has an APR carbon intake, IE intercooler and Forge BOV. On the exhaust side, BMP opted for Milltek downpipes with cats and cat-back exhaust. They also deleted the restrictive turbo muffler with a one-piece kit from CTS Turbo.

The sum of these parts is a highly impressive 321hp and 350lb/ft at the wheels measured by a local Dynojet rolling road. And while this is astonishing given the bolt-on nature of the mods, Autrey may consider a big turbo and cat-less power once software becomes available. 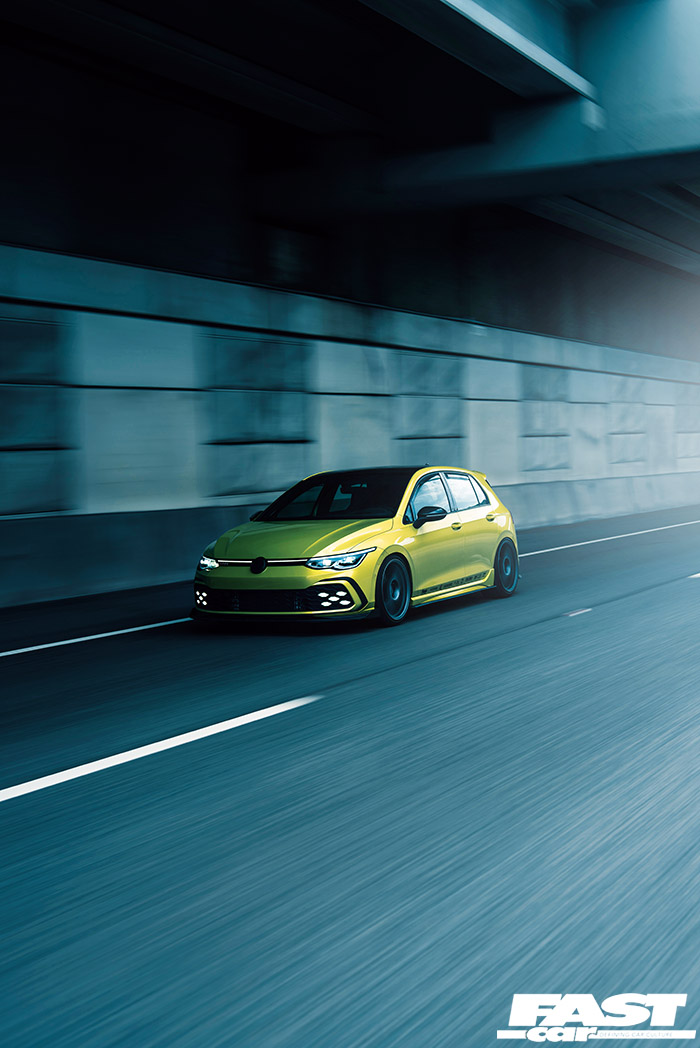 It’s interesting to note that Autrey has chronicled the engine development and reported a staggering 15hp increase from the Milltek exhaust for the VW Golf GTI Mk8. There’s also alleged to be 6-7hp from the turbo muffler delete, which is how the numbers start adding up.

Unable to look at its distinctive metallic paint without being reminded of BMW’s Austin yellow, there’s no denying the BMP Mk8 Golf GTI is a head turner. But whereas Mk7 mechanical components will fit the new car, it was a different story for the exterior. Fortunately, a few specialists were on their game, including Flow Designs in Australia, which assembled a splitter kit. This was augmented by an Oettinger rear wing after plans for a Golf R spoiler were dashed. Autrey actually placed an order but discovered the R part was only available with a painted finish, making it more expensive and requiring additional money to paint it Pomelo. “It’s still months away,” Autrey lamented in reference to VW supply delays. However, he successfully raided the Golf R parts bin for side skirts and mirror caps, while VW Accessories provided glitter such as Dynamic indicators. 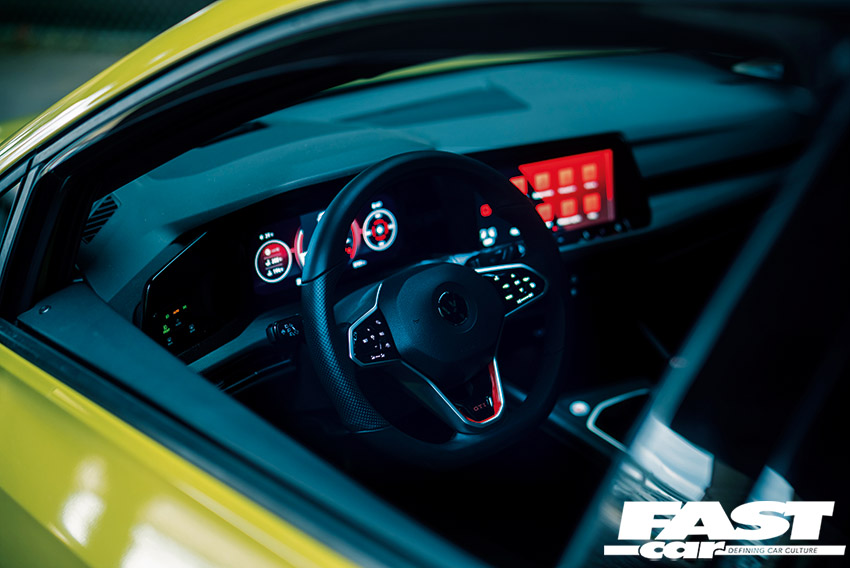 The interior is practically standard, with only a Black Forest gear knob and gaiter making the spec list. “The GTI seats and steering wheel are amazing, so I didn’t see any reason to swap them for now,” Autrey explained. Of course, we predict that might change as the project develops with the rear cage and audio system…

With fierce determination, tons of industry support and a fanatical devotion to VW tuning, Autrey and BMP Tuning have assembled a very respectable Mk8 GTI within months of its arrival. We know he’ll continue to pioneer the new platform and we can thank him for the fitment tips that will save the rest of us time and frustration. And with a Mk1 VW Golf project also underway, Autrey is equally determined to prove he’s capable of more than an encyclopedic knowledge of the MQB platform. 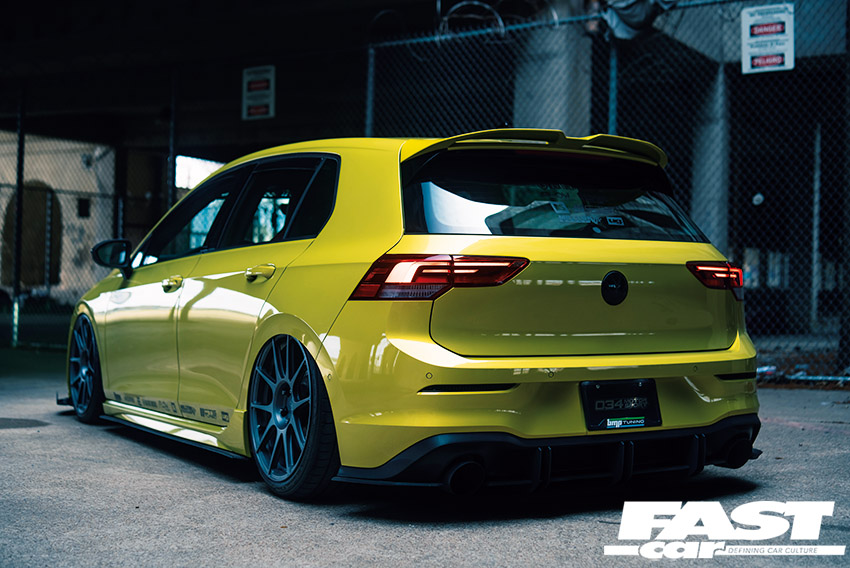