Trimmer by day, road racer by night…Chris Smith’s modified Mk1 Golf GTI is far from subtle, but then we don’t think it was ever meant to be given its Berg Cup styling and 301bhp 1.8T engine.

Chris Smith spends his working days as a vehicle upholsterer, specialising in transforming modern VW Transporters into highly desirable camper vans. Yet, each night after work over the course of three years, he turned his attention to a VW project of his own. It may be lacking a sink, bed, and cooker, but this stunning Berg Cup inspired modified Mk1 Golf GTI makes up for its lack of camping appliances with a 301bhp 1.8T along with an array of well thought out mods.

Chris is a self-confessed long time VW aficionado, though his first car was a red Vauxhall Corsa. “I was working as a valeter at a French car dealership aged 18 at the time,” Chris recalls, “my manager, John was originally from Germany, he just loved Volkswagens and his endless enthusiasm for the brand began to rub off on me too.” While John may have been cursing every time he stepped foot into his showroom full of distinctly French cars, he did at least manage to persuade Chris to swap his Corsa for a Mk2 Golf 1.6 Driver. “That’s when it all kicked off, I’ve had at least 10 Golfs over the years, many of which I’ve modified in some way naturally,” Chris adds. 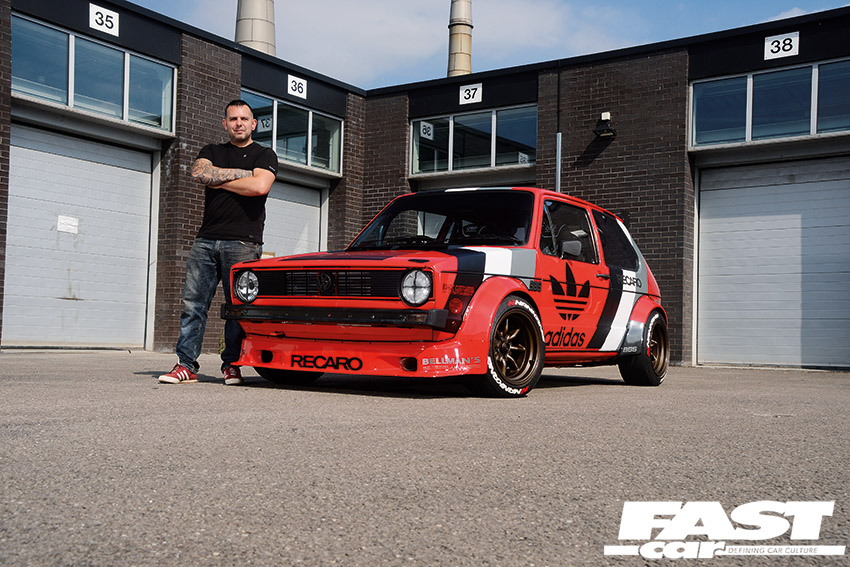 The first Mk1 arrived when Chris was 21, “It ended up becoming a major project and it took me a few years just to make it roadworthy,” he remembers, “I only drove it for one summer and unfortunately, due to financial difficulties at the time I couldn’t afford to run two cars, so the Mk1 had to go.” This was a regrettable sale on a large scale and Chris always promised himself one day he’d own another.

Twelve long years elapsed, by this time Chris had undergone numerous changes of jobs and finally a complete change of career. “I found myself in a far better position to purchase another Mk1,” he recalls, “by now values had shot up and I settled on a 1989 Mk1 golf Cabriolet Automatic.” The benefits of a canvas roof were explored throughout that summer, though Chris found himself constantly checking out other Mk1s on the market.

“I spotted a tin top GTI project online and cheekily asked the vendor if he’d do a straight swap with my cabriolet,” Chris smiles, “to my surprise, he agreed!” Once the 1982 Mk1 GTI 1.6 was back home, Chris began to wonder if he’d made the right decision, “it was a real mess and hadn’t been on the road since 1994,” he explains, “a long string of owners had attempted to rectify any faults, usually without success.” This left Chris with a Mk1 that not only hadn’t been driven for decades, there were countless bodges to undo as well. 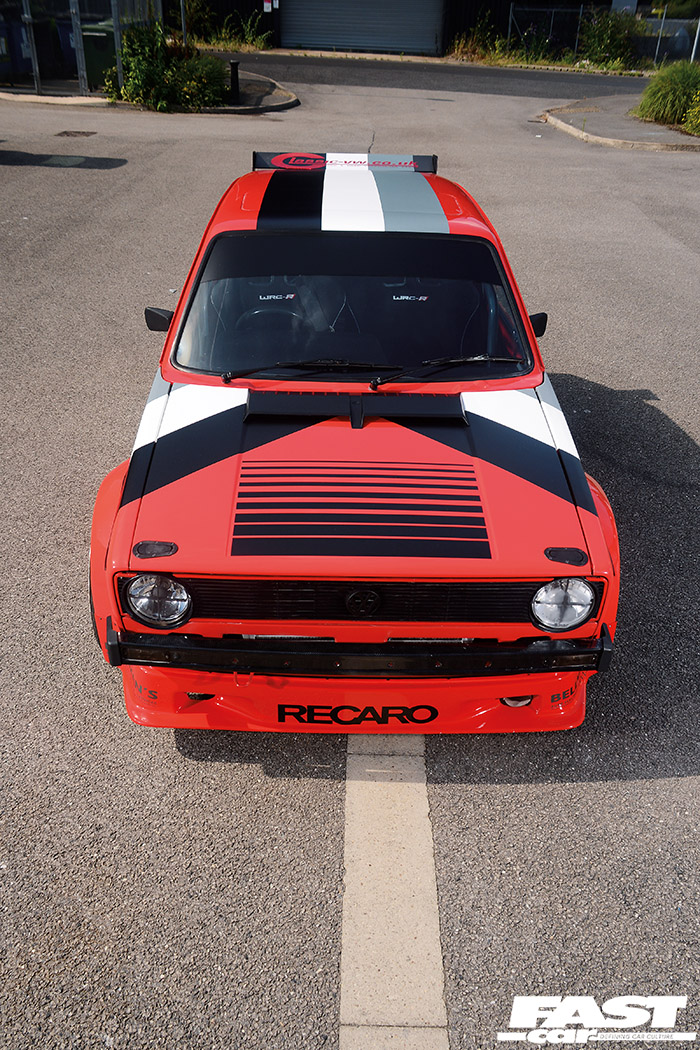 “I began by stripping the shell back to bare metal, at some point it had been repainted black, but the original colour was Mars Red,” he tells us, “rubbing down the engine bay was a long process and not one I particularly enjoyed!” In fact, Chris ended up rubbing down half the bay and leaving the remainder for a further twelve months. “I spent that time doing something that felt more productive, moving house and building a bigger garage,” Chris laughs, “once all that was out of the way, I returned to the Mk1’s bodywork.”

Initially, Chris planned to wrap the exterior, but as lockdown 2020 hit and with a lot more time on his hands, that plan soon changed to a full respray. Mars red was the chosen colour, but the standard GTI kit wouldn’t be going back on. “I’d been to loads of shows by now and the Berg Cup style really caught my eye,” Chris explains, “I reckoned that same style would suit my own project.” The wide Berg cup arches had been cut and trial fitted before the respray began, Chris wisely choosing to add a Vortex rear spoiler, early Series 1 bumpers and Kamei bonnet scoop to complete his intended look. 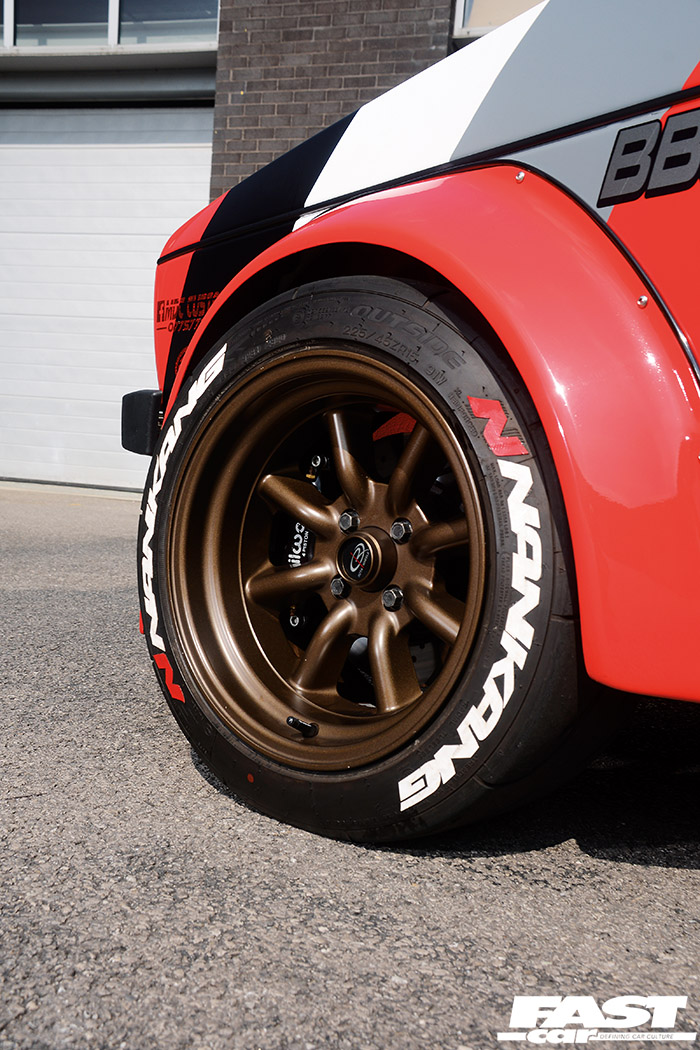 Filling those wide arches correctly is an essential move when fitting a Berg Cup bodykit and Chris was keen to turn his attention to the chassis to ensure the stance would be just as he’d envisaged. “I opted for BC Racing coilovers with H&R anti roll bars and seam welded bottom arms,“ he points out, “I also added OMP upper and lower strut braces and Powerflex black series bushes all round so the suspension is pretty stiff.”

With his eyes already on a more potent powerplant, Willwood front calipers and 280mm discs along with a switch to a Mk2 Golf rear disc set up vastly improve the stopping power. “I’d never set up a pedal box in my life so that stage required asking for some advice, “ Chris continues, “when it came to the wheels, I had to get it right and eventually settled on 15×9 Rota alloys.” Wrapped in 225/45/15 Nankang AR1 rubber, we’d agree he’s made the correct choice.

The original 1600cc GTi engine hadn’t ran in decades which was of little concern to Chris as he planned to replace it anyway. “I’d saved the 1.8T engine from my wife Laura’s Audi TT when she wrote it off, just for this moment,” Chris continues, “the pipes and brackets all need altering to fit in a Mk1 though.” Fortunately, the conversion process coincided with another lockdown and Chris found himself locked in his garage most days and nights tackling the wiring loom. “I spent hours attempting to get just the wipers, lights and indicators to work,” Chris recalls, “I had to unwrap all the wires to find the breaks just to get the basics working.” 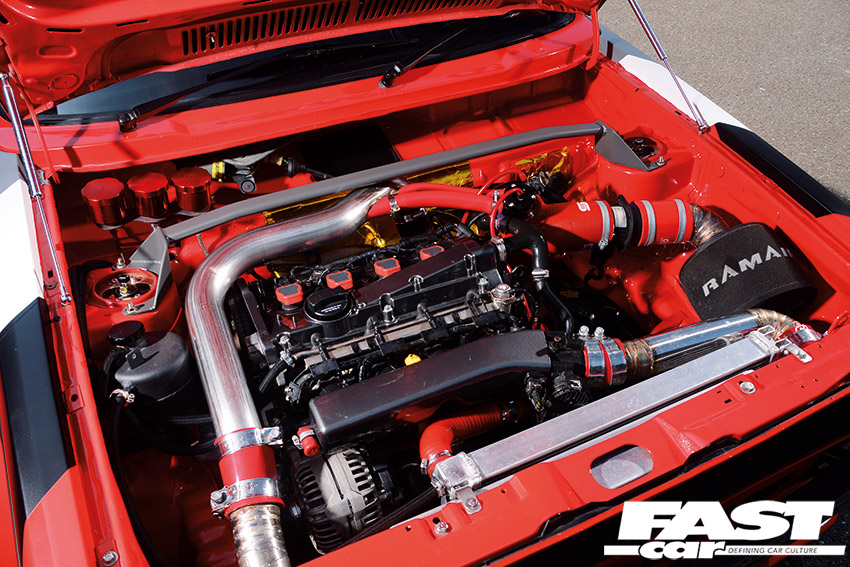 Once resolved, extra wiring was added for the gauges, fuel pump and cut off along with the battery isolator, James E Looms coming to some much-needed assistance here. Just to test Chris’s patience even more, that first 1.8T lump lost oil pressure shortly after the conversion was completed, “I replaced it with another TT engine using an AGU bottom end combined with an APX head,” Chris points out.

The current 1.8T also benefits from a hybrid K04 turbo, 550cc injectors and ME7.5 management while custom made boost pipes, a Badger 5 large inlet pipe and a Trackslag 3.5in downpipe mated to a 2.5in exhaust system ensures this purposeful looking Mk1 is just as rapid as its looks suggest. And let’s not forget the universal intercooler, alloy radiator, RAM air filter and Mocal oil cooler, this certainly isn’t your average budget build. 301bhp and 440nm torque is the impressive result, more than plenty in a featherweight Mk1! As you’d expect, the transmission has been upgraded to match, Chris opting for a Mk4 Golf 1.8T 5 speed box with a Quaife LSD and TDi 5th gear. 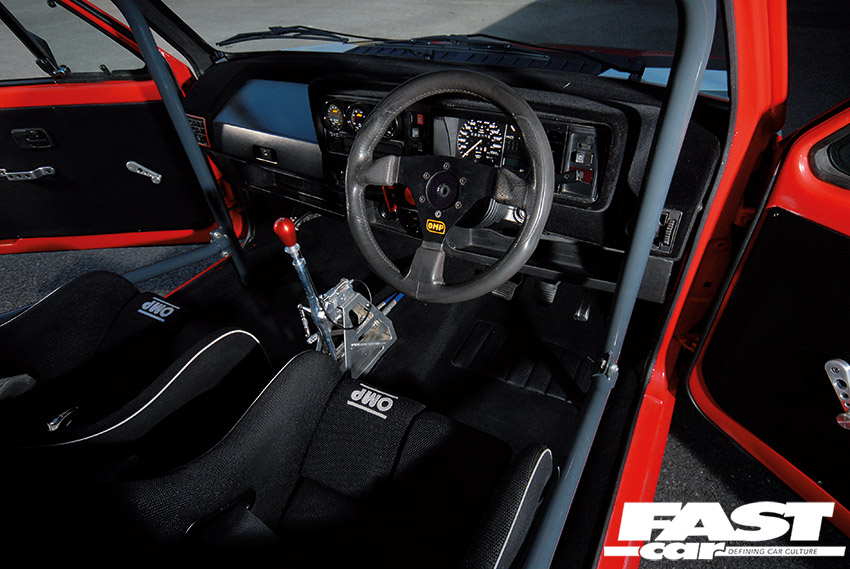 When it came to the interior of the modified Mk1 Golf GTI, Chris was more in familiar surroundings though a Mk1 cabin is quite different to that of your average VW T5. “I fitted a new front carpet and a four-way stretch carpet in the rear,” Chris explains, “I managed to find a second-hand flocked dash locally and fitted an Alcantara headlining.” GSM Nottingham supplied those ultra-supportive OMP WRC-R bucket seats and TRS harnesses, though Chris found them initially to sit too low.

“I’m not the tallest person around, luckily Fab53 sorted me some custom bases which enable the seats to sit just that bit higher,” Chris laughs, “Fab53 also modified the Roll Centre roll cage as originally there was no harness bar.” The detachable OMP steering wheel, bank of AEM gauges and alloy door furniture all complement the Berg Cup motorsport theme and how cool does that alloy CAE shifter look too?

If Chris had kept the exterior plain Mars red, there’s no denying this modified Mk1 Golf GTI would have turned heads, but with the addition of race themed decals it really does stand out from the pack. “I contacted Lydia at MDC Customs for the vinyl decals,” Chris explains, “I had the idea and measurements for the stripes beforehand, the Adidas branding only came to me after looking at images of various race cars on the internet and I thought it would work well with the three stripes.” 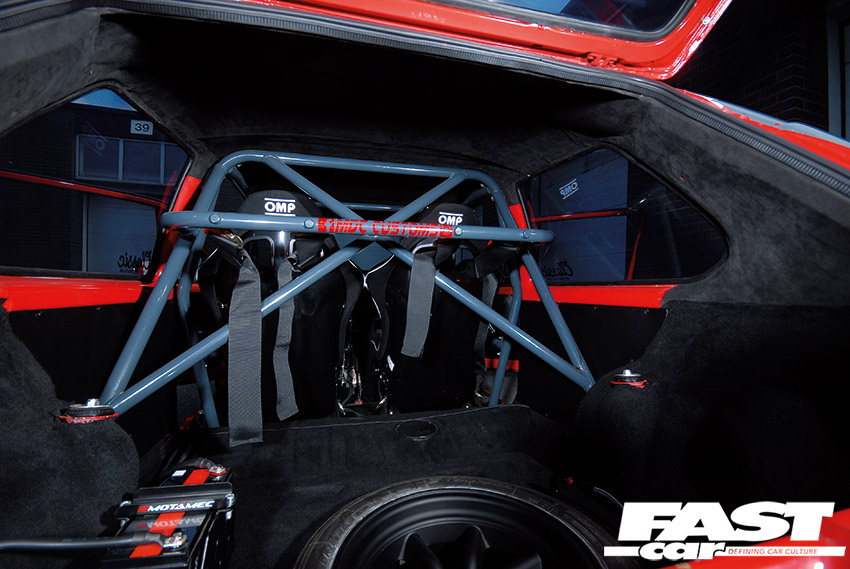 Despite numerous setbacks, Chris has managed to tackle almost the entire project from start to finish in his garage at home, his wife Laura also helping out many times too. A few specialists have been sought where necessary, but essentially Chris can proudly say he’s built this creation himself. “It’s turned out even better than I’d hoped,” Chris smiles, “the only addition I will be fitting shortly is power steering as those wide tyres make parking hard work!”

There’s another Mk1 Golf cabriolet to rebuild which has already been in his possession for 9 years and that may well be followed by a Chevy pickup too. And while his VRT campervan interior business continues to go from strength to strength, it sounds like Chris will be kept busy for some time to come. 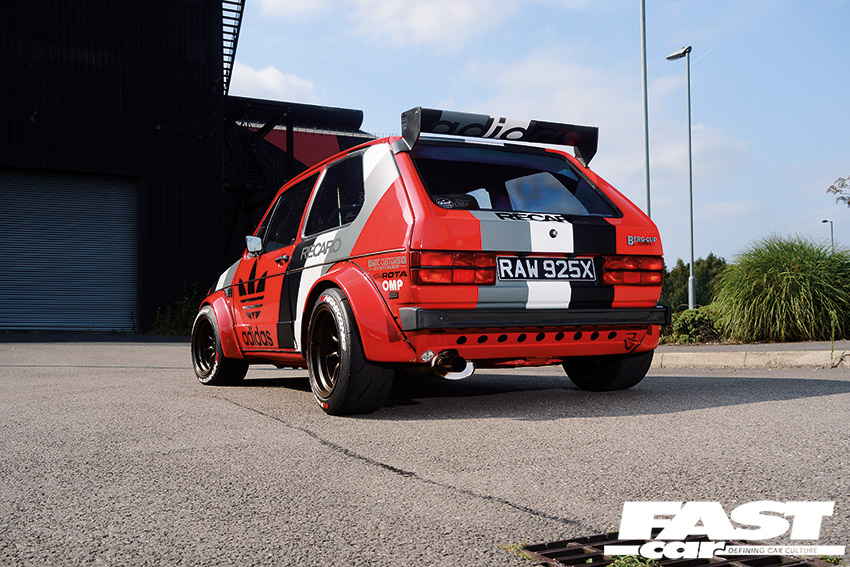